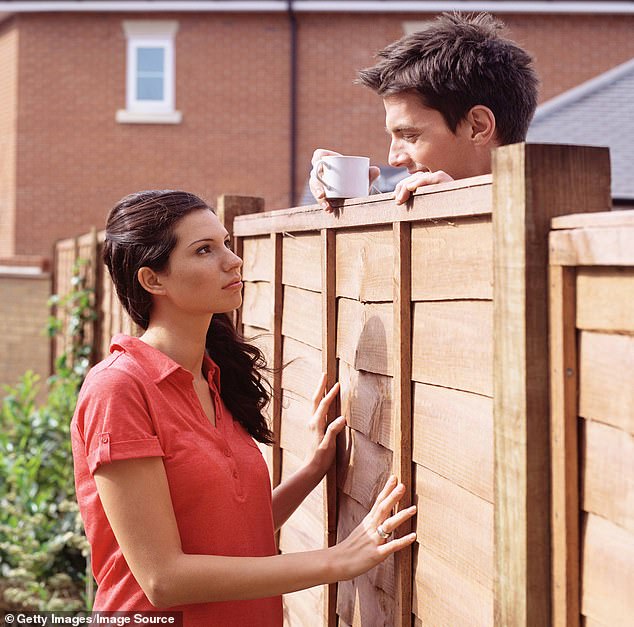 A woman has sparked a debate online after admitting her neighbour is ‘creeping’ her out and ‘giving her anxiety’.

The anonymous woman asked for advice on parenting forum Mumsnet, explaining she can’t leave her house without the man approaching her and that she is ‘starting to get nervous’ every time she steps out.

While many thought she was overreacting to the situation as they claimed he was probably just lonely, others said she should ‘consider moving’.

Explaining her predicament, the woman said: Any time that I am EVER in my front garden, my male neighbour will come over right to my walk, to talk to me.’

She added that he is creeping her out and causing her a lot of anxiety.

She continued: ‘I’m 30 l live alone in a small terraced house. I’ve been living here for one year. Next door to me lives a man in his late 50s. We have nothing in common.

‘We would say hello the odd time but that’s it. The houses don’t open right on to the street. We have a very small front garden, walls and gate each. 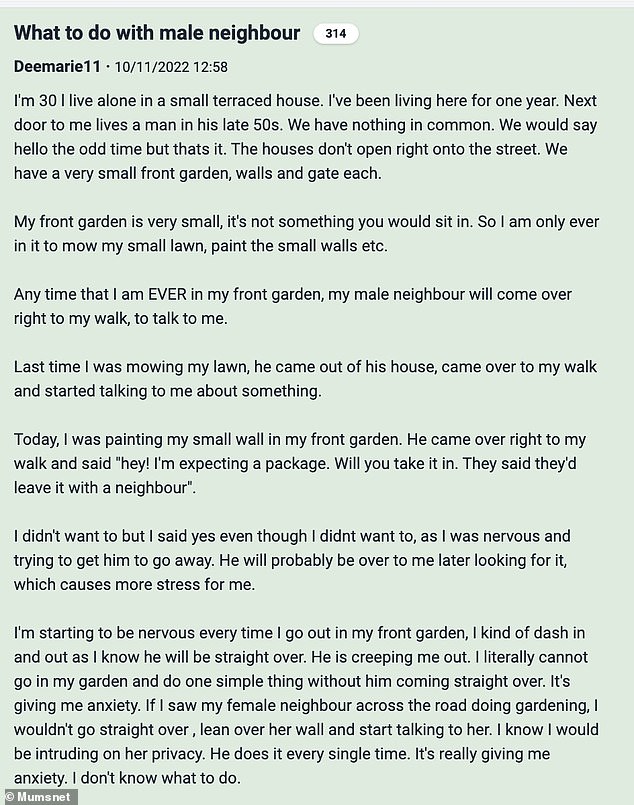 The anonymous woman took to the UK parenting forum and asked for advice after she explained she can’t leave her house without the man approaching her, saying she is ‘starting to get nervous’ every time she steps out

‘My front garden is very small, it’s not something you would sit in. So I am only ever in it to mow my small lawn, paint the small walls etc.

‘Last time I was mowing my lawn, he came out of his house, came over to my walk and started talking to me about something.

‘Today, I was painting my small wall in my front garden. He came over right to my walk and said, “Hey! I’m expecting a package. Will you take it in? They said they’d leave it with a neighbour”.

‘I didn’t want to but I said yes even though I didn’t want to, as I was nervous and trying to get him to go away. He will probably be over to me later looking for it, which causes more stress for me.

‘I’m starting to be nervous every time I go out in my front garden, I kind of dash in and out as I know he will be straight over. He is creeping me out. 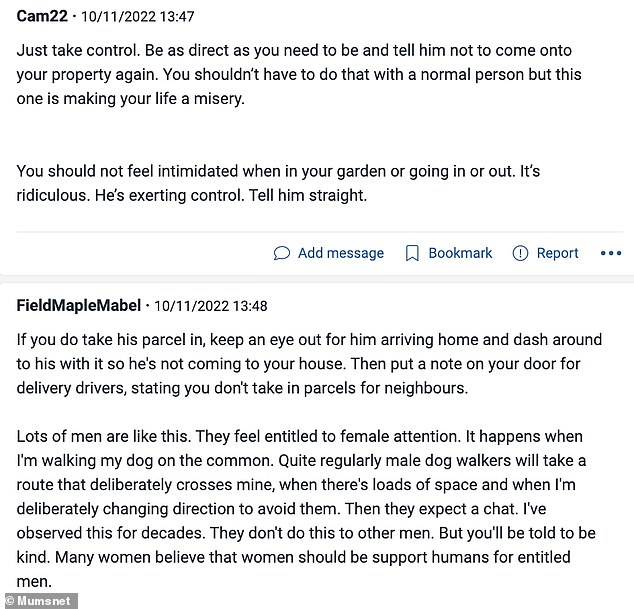 ‘I literally cannot go in my garden and do one simple thing without him coming straight over. It’s giving me anxiety.

‘If I saw my female neighbour across the road doing gardening, I wouldn’t go straight over, lean over her wall and start talking to her.

‘I know I would be intruding on her privacy. He does it every single time. It’s really giving me anxiety. I don’t know what to do.’

Some people suggestion she should be direct and tell him to leave her alone while other said she should wear headphones and just ignore him.

One person wrote: ‘I’d probably want to be quite direct – sorry I quite like to be left alone when I’m in the garden.

‘But equally you could start by wearing headphones etc and giving him a hint like, “Oh just enjoying some peace with my music” and build up.’

Another said: ‘I’d probably stick earphones in and pretend to be on the phone, so he has to stand there awkwardly then go away. Twice or three times should do it.’

While a third wrote: ‘Just take control. Be as direct as you need to be and tell him not to come on to your property again. You shouldn’t have to do that with a normal person but this one is making your life a misery.

‘You should not feel intimidated when in your garden or going in or out. It’s ridiculous. He’s exerting control. Tell him straight.’

Others thought the woman was unfriendly and some claimed he is probably just lonely.

One person wrote: ‘Sounds like a normal, if lonely, neighbour. What a miserable place to live if none of you pass the time of day.

‘Wait for him to be in, run round with the parcel, knock on the door and run back in your own house. 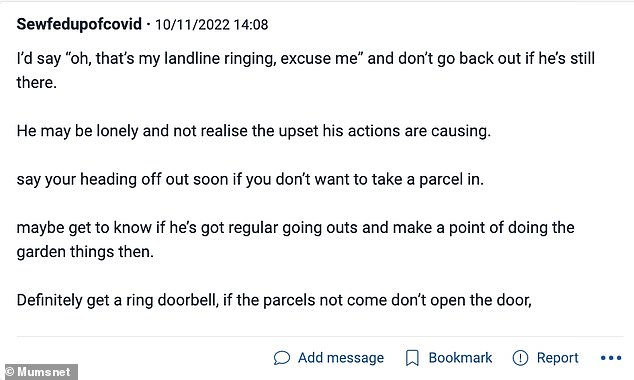 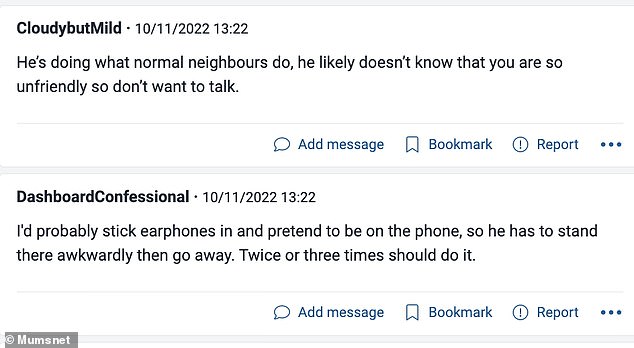 ‘Him thanking you for being a nice neighbour might make you feel threatened (Have we as a society got to the point where if someone is just friendly, it is seen as threatening?)’

Someone else said: ‘He’s doing what normal neighbours do, he likely doesn’t know that you are so unfriendly so don’t want to talk.’

While another wrote: ‘He’s probably bored and lonely. But you don’t owe him company.

‘Be polite but brisk. Don’t get into a conversation and if he asks about deliveries etc again just say you’re not reliably in, so it might be better if he asks someone else.

‘Head phones or sunglasses are also good ways to help you keep your boundaries a little bit more comfortably. Just carry on with your job. If he persists, then say you really haven’t got time to chat and have jobs you want to get on with.’

Someone else said: ‘Giving him the benefit of the doubt, but he’s possibly lonely and it’s possible that he was friendly and chatty with the previous occupant of your house and therefore used to talking to the person next door.’

However, some people said she should ‘consider moving’ house to get away from her intrusive neighbour. 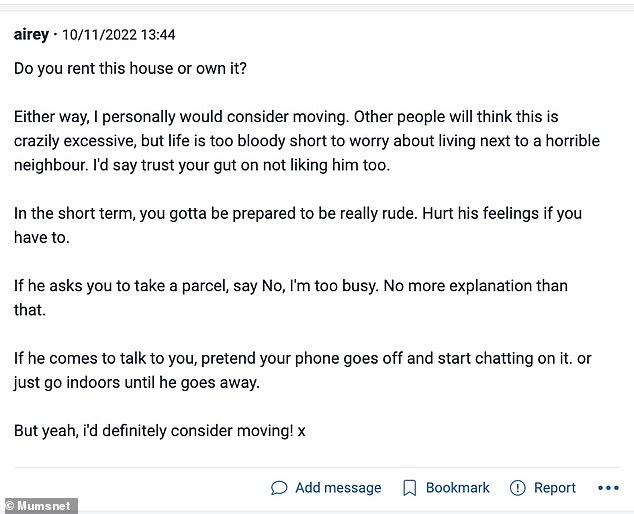 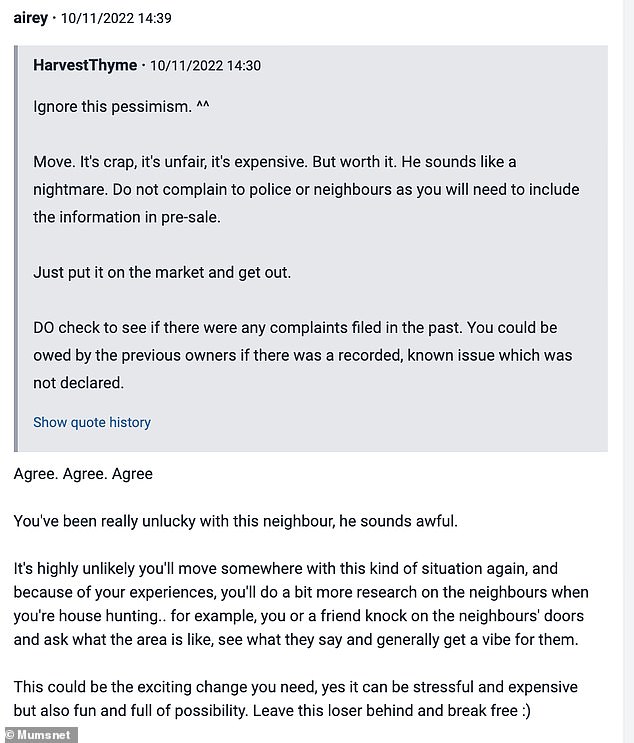 One person wrote: ‘Do you rent this house or own it? Either way, I personally would consider moving.

‘Other people will think this is crazily excessive, but life is too bloody short to worry about living next to a horrible neighbour. I’d say trust your gut on not liking him too.

‘In the short term, you gotta be prepared to be really rude. Hurt his feelings if you have to. If he asks you to take a parcel, say No, I’m too busy. No more explanation than that.

‘If he comes to talk to you, pretend your phone goes off and start chatting on it. or just go indoors until he goes away. But yeah, i’d definitely consider moving! x’ 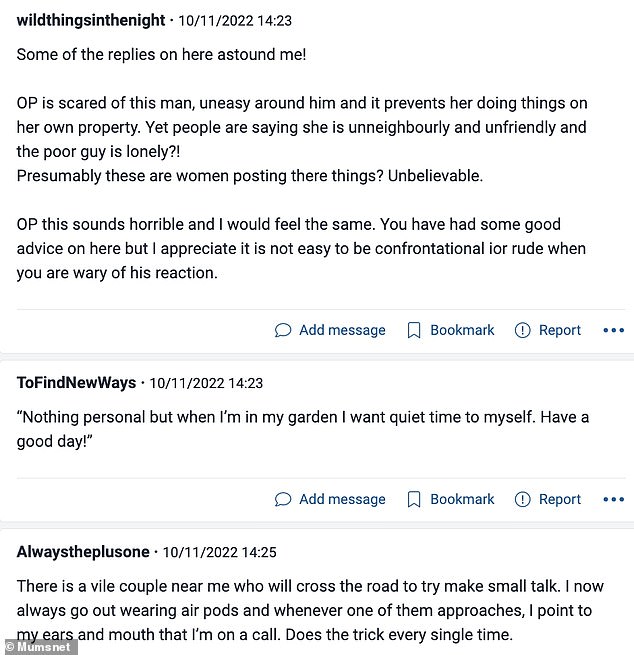 Another said: ‘Move. It’s crap, it’s unfair, it’s expensive. But worth it. He sounds like a nightmare. Do not complain to police or neighbours as you will need to include the information in pre-sale.

‘Just put it on the market and get out. DO check to see if there were any complaints filed in the past. You could be owed by the previous owners if there was a recorded, known issue which was not declared.’

Another wrote: ‘Agree. Agree. Agree You’ve been really unlucky with this neighbour, he sounds awful.

‘It’s highly unlikely you’ll move somewhere with this kind of situation again, and because of your experiences, you’ll do a bit more research on the neighbours when you’re house hunting.. for example, you or a friend knock on the neighbours’ doors and ask what the area is like, see what they say and generally get a vibe for them.

‘This could be the exciting change you need, yes it can be stressful and expensive but also fun and full of possibility. Leave this loser behind and break free :)’

Little House on the Prairie star Melissa Gilbert says she ‘lost her mind’ after...

Five tourists have been stranded underground at Grand Canyon Cavern tourist attraction for 24...