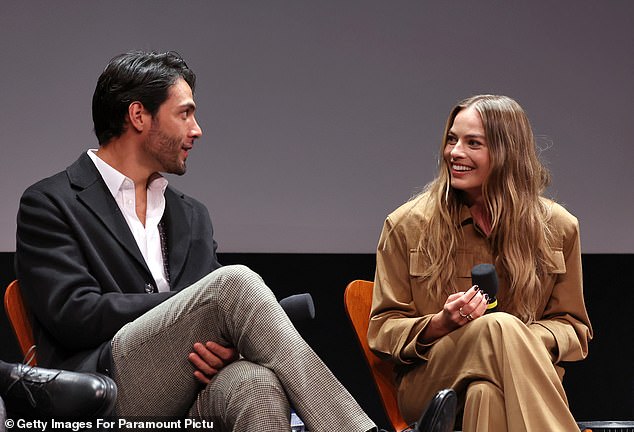 Margot Robbie put on another chic display in a camel co-ord as she joined her co-star Brad Pitt at a screening and Q&A for their upcoming film Babylon.

The actress, who appears among a star-studded cast in Damien Chazelle’s three-hour epic, cut a glamorous figure as she took to the stage at LA‘s Samuel Goldwyn Theater.

Set in the 1920s, during Hollywood’s transition from silent films to talkies, Babylon is ‘a tale of outsized ambition and outrageous excess, as it traces the rise and fall of multiple characters during the early Hollywood era.’

Glam: Margot Robbie put on another chic display in a fun camel boiler co-ord as she joined her co-star Brad Pitt at a screening and Q&A for their upcoming film Babylon

Margot was in high spirits as she discussed the upcoming release of the film, donning a stylish camel cropped shirt with matching flared trousers that flashed a hint of her toned abs.

The pair appeared alongside fellow cast members Jean Smart, Diego Calva and Tobey Maguire to discuss the release ahead of the special screening.

It was previously reported that Babylon will be an eye-watering three hours in length, as director Damien described the film as ‘the hardest thing he’s ever done.’ 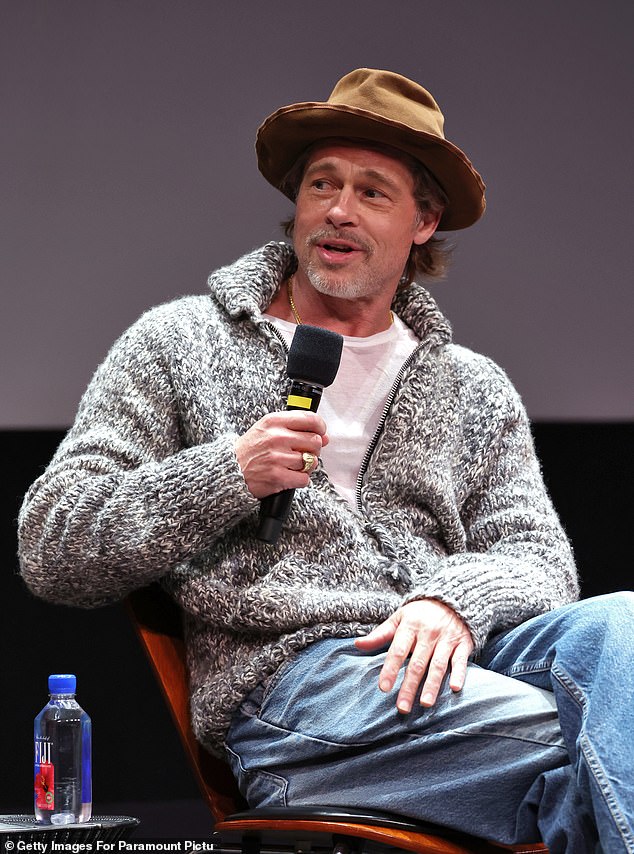 Insight: Brad was in good spirits as he took to the stage to discuss the upcoming film, which is set for release in the US on December 23 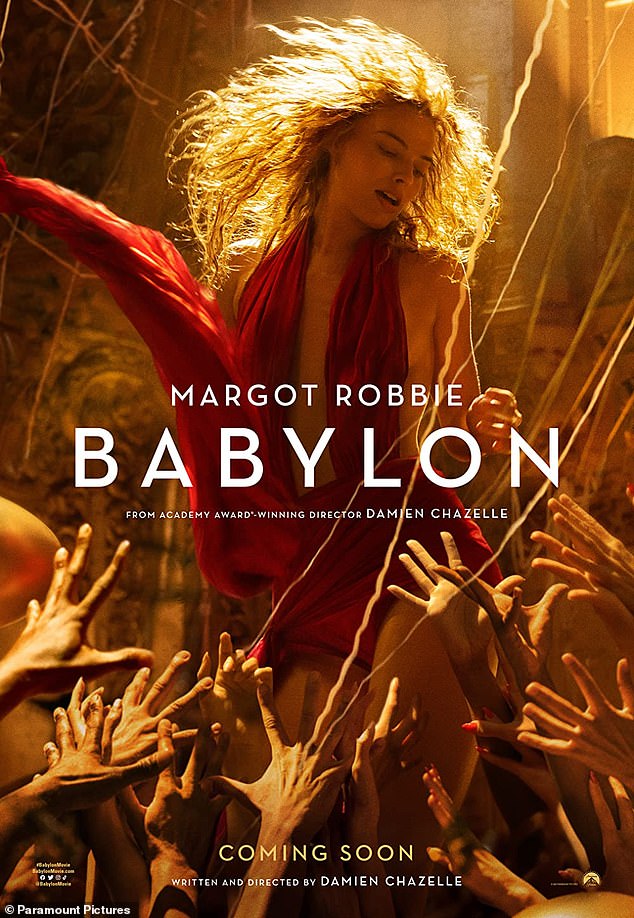 How long? It was previously reported that Babylon will be an eye-watering three hours in length , as director Damien Chazelle described the film as ‘the hardest thing he’s ever done’ 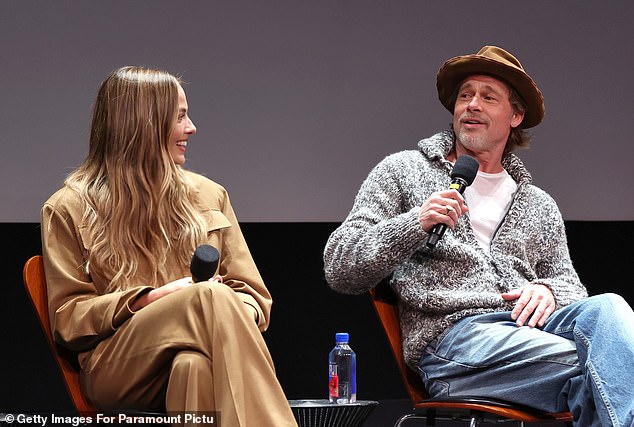 Looking good! Margot opted for a stylish camel co-ord as she joined Brad to chat about the film, which sees the pair reunite after co-starring in Once Upon A Time In Hollywood 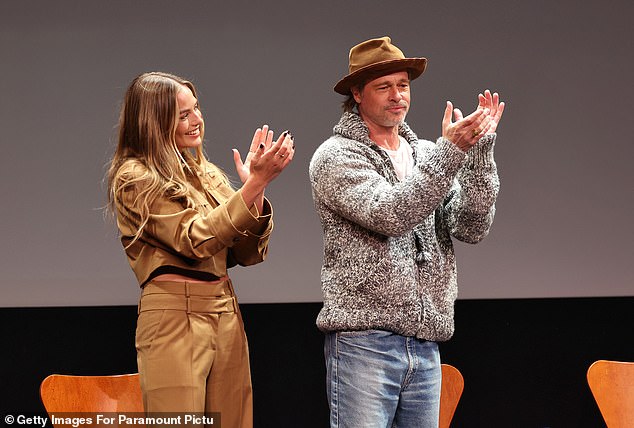 Chic! The Australian star flashed a hint of her toned abs in the cropped nude shirt and matching high-waisted trousers 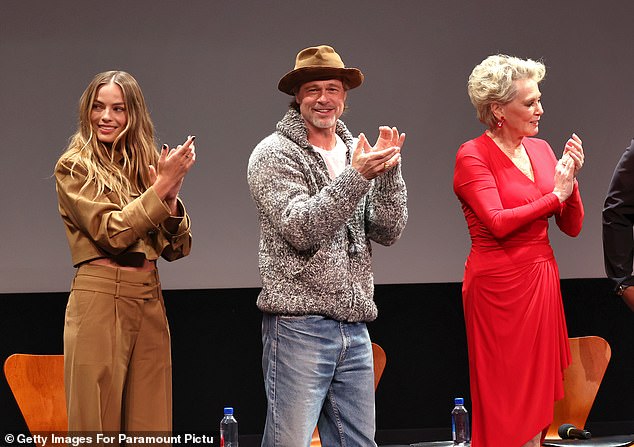 Anticipated! Joined by Jean Smart on stage, the film’s vast cast offered fans a glimpse of the film ahead of its US release next month 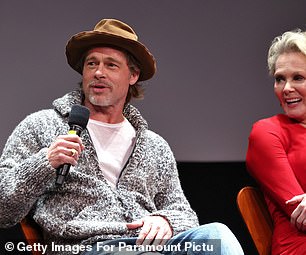 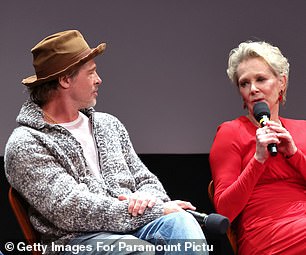 Awaited! Babylon is expected to be an awards favourites when it is released, after production was delayed due to the Covid pandemic

While Chazelle, 37, called this particular filmmaking ‘particularly challenging’, he did go on add that ‘it was a challenge that was pretty exciting to take on.’

After having seen the start date pushed back due to the COVID-19 pandemic, filming finally kicked off on July 1, 2021 and went on for nearly four months, wrapping on October 21.

Since then, it’s all been about the post-production phase, which is still ongoing after another year of work on the film.

Robbie, 32, plays an aspiring actress named Nellie LaRoy, while Pitt, 58, portrays Jack Conrad, a movie star at a different stage of his career. 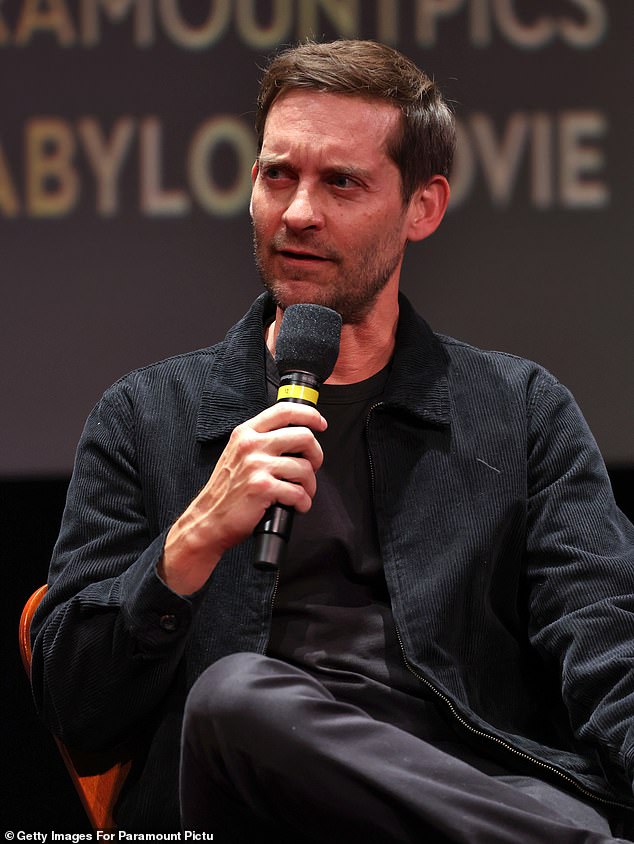 Viewpoint: Tobey Maguire was also among several stars in attendance for the California-based screening

But the story also follows Mexican-American immigrant Manny Torres, played by Calva, 30, as he pursues a career within the industry, starting as a film assistant. 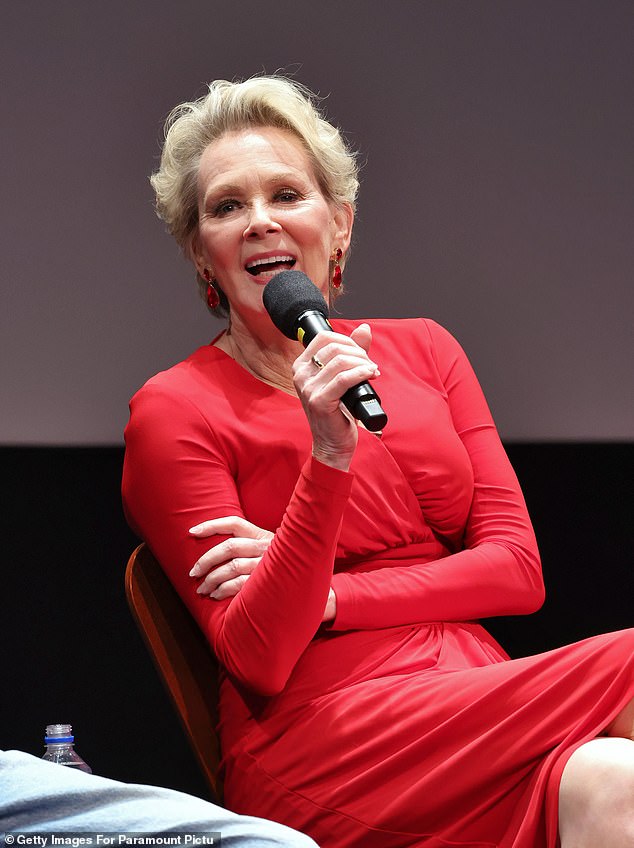 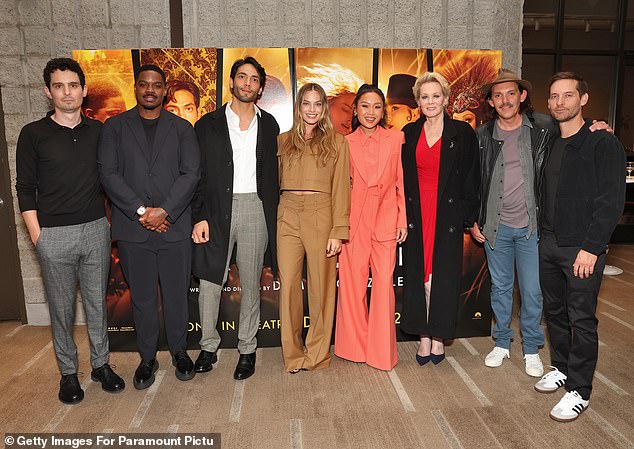 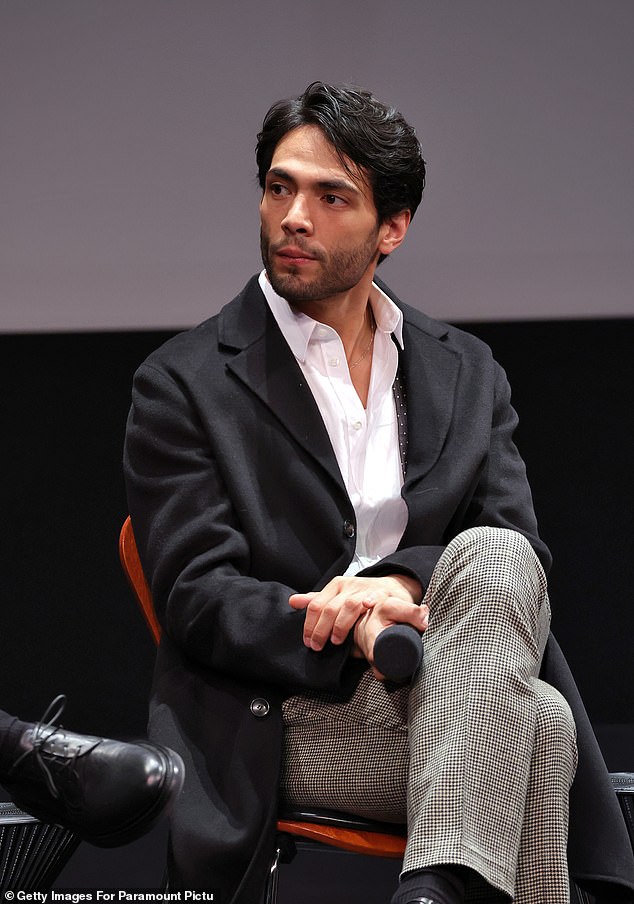 Sharp: Diego Calva (pictured) takes centre stage in the film as Mexican-American immigrant Manny Torres as he pursues a career within the industry, starting as a film assistant

Chazelle, who has the distinction of being the youngest person to win the Best Director Oscar for La La Land at the age of 32, said the story captures ‘humanity at its most glamorous and animalistic,’ while attending the Toronto International Film Festival in early September.

Many fans may also know the French-American film director, screenwriter and producer for his other films that include Whiplash (2014) and First Man (2018).

Having been engrossed in the production for the last couple of years, Chazelle also confessed, ‘I’ll be very happy to finally finish it.’ 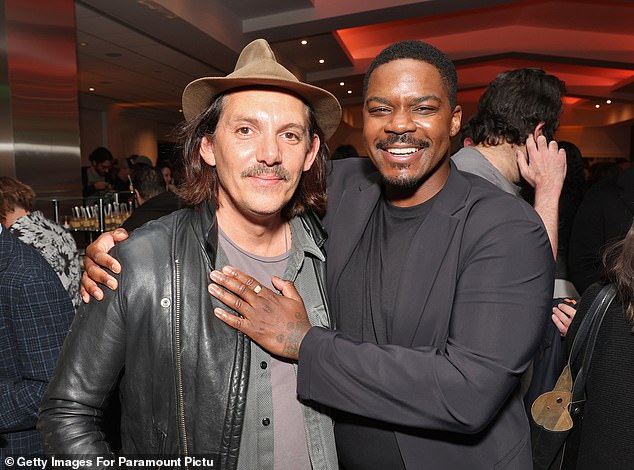 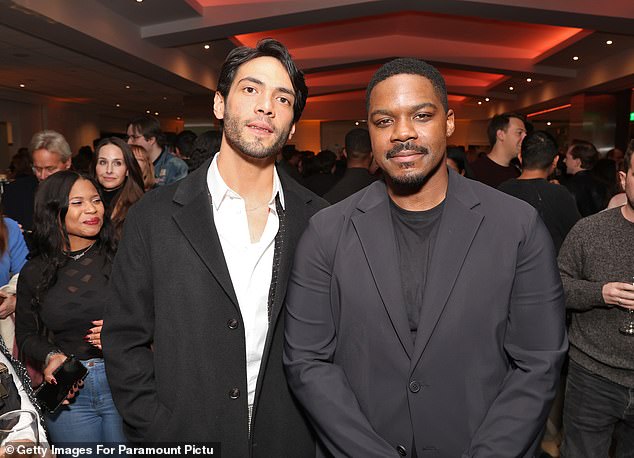 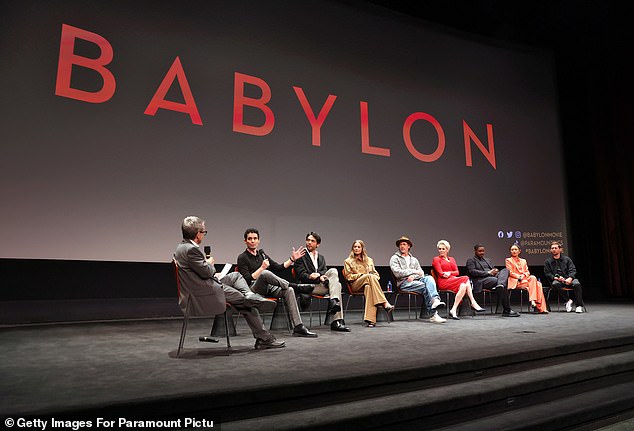 Awards favourite! While it hasn’t screened yet for critics, Paramount Pictures has already made award submissions, that includes Robbie and Calva for Best Actress and Best Acto

While it hasn’t screened yet for critics, Paramount Pictures has already made award submissions, that includes Robbie and Calva for Best Actress and Best Actor, while Pitt will be up for Best Supporting Actor.

The other actors also up for award considerations are Jovan Adepo, Tobey Maguire, Jean Smart and Li Jun Li.

Pitt and Hamilton are also serving as producers on the film along with Matt Plouffe.

Babylon, which reportedly has a budget stretching between $78-$110 million, is scheduled to premiere in theaters in the U.S. on December 23. 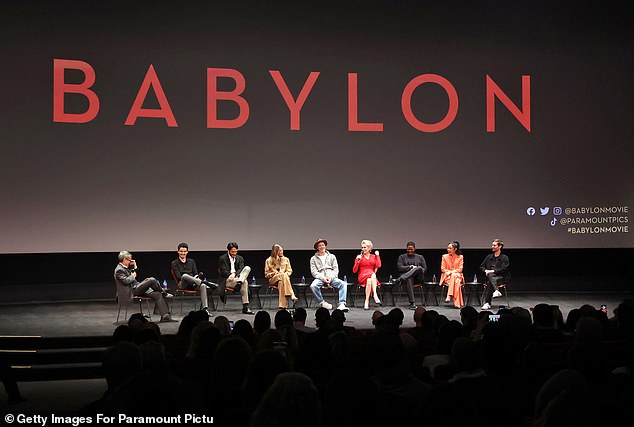 Working hard! Pitt and Hamilton are also serving as producers on the film along with Matt Plouffe

Putin’s mobilised thugs prepare for war by bawling in Russian nightclub ahead war in...