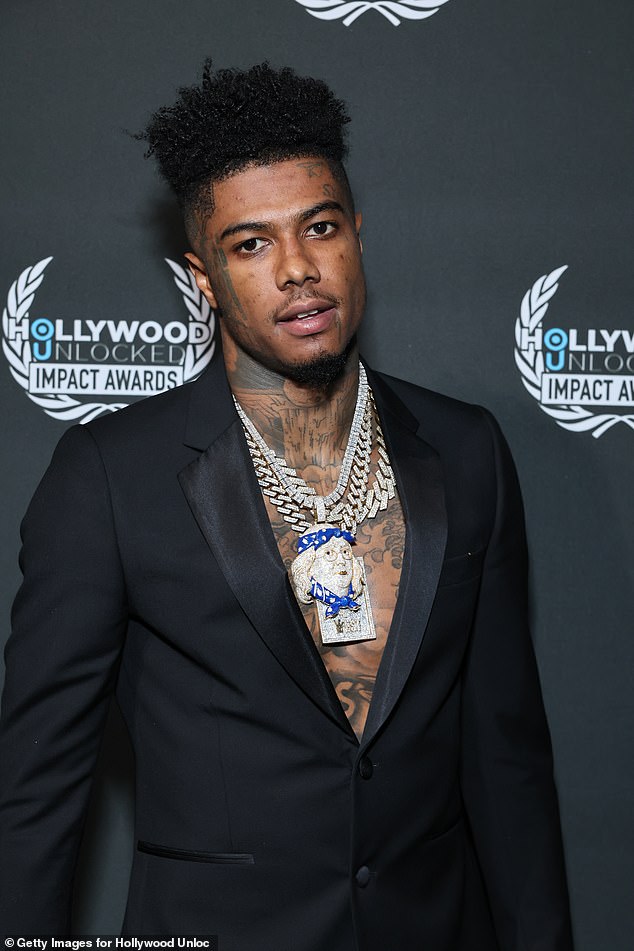 By Paul Chavez For Dailymail.com

Blueface was arrested for investigation of attempted murder on Thursday in Las Vegas, according to a report by TMZ.

The 25-year-old rapper, real name Johnathan Jamall Porter, was taken into custody outside of Lo-Lo’s Chicken & Waffles in an apparent undercover operation.

Eyewitnesses told TMZ that six-to-eight officers were in unmarked vehicles and conducted the arrest.

Under arrest: Blueface, shown in June in Beverly Hills, California, was arrested for investigation of attempted murder on Thursday in Las Vegas, according to a report by TMZ

The rapper’s girlfriend Chrisean Rock, 22, was with Blueface when he was arrested.

The Las Vegas Metropolitan Police Department released the following statement: ‘On November 15, 2022 at approximately 2:40 p.m., LVMPD detectives arrested 25-year-old Johnathan Porter on charges stemming from a shooting that took place on October 8, 2022 in the 6300 block of Windy Road.’

The statement added that Porter will be booked into the Clark County Detention Center on warrants for attempted murder with a deadly weapon and discharging a firearm at/into an occupied structure. 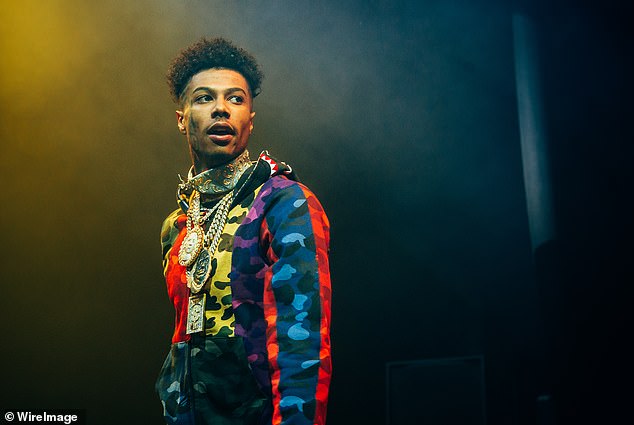 October shooting: The 25-year-old rapper, real name, Johnathan Jamall Porter, was taken into custody outside of Lo-Lo’s Chicken & Waffles in an apparent undercover operation on charges stemming from a shooting that took place on October 8

Blueface was shown just hours before his arrest with his girlfriend, real name Chrisean Malone, in video she posted on social media for her nearly 2.5 million followers.

They enjoyed light-hearted conversation together in the video and kissed while walking in a hotel hallway.

‘Dis was 3 hours before they took u from me Jesus Got us NO WEAPON FORMED AGAINST US SHALL PROSPER IM YO ROCK FORever!!!,’ Chrisean wrote in the caption.

She earlier tweeteed ‘ugh why gotta take you from me’ along with broken heart emojis and multiple crying face emojis.

Blueface scored his most successful single with a remix of his song Thotiana featuring Cardi B and YG that peaked at number eight on the Billboard Hot 100 chart.

He released his debut studio album Find The Beat in 2019.

Blueface was born in Los Angeles and played football for Arleta High School in the San Fernando Valley area.

He started rapping in January 2017 under the stage name Blueface Bleedem, a reference to his ties to the School Yard Crips street gang.

PM faces summer of Tory discontent over Partygate amid threat of move to oust...

Suzy Lamplugh murder suspect is urged to confess as it is revealed he is...

Maya Jama flashes her toned physique in a sports bra while dancing in the...