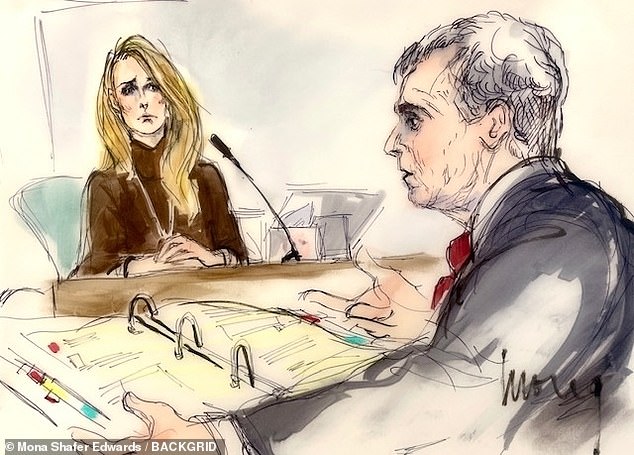 The wife of California‘s governor broke down in tears in court on Tuesday in her second day of testifying against Harvey Weinstein, describing how she faked an orgasm in a bid to end being raped.

Jennifer Siebel Newsom, 48, is the fourth woman to testify in Los Angeles against the Hollywood producer – who is already serving a 23-year sentence in New York for rape and sexual assault.

Emotional and angry on the stand, she defended remaining in contact with Weinstein after the alleged attack, pointing out his immense power in her industry and her ambition to succeed.

‘He ruined my life, I put it in a box, and I was not going to not pursue my entertainment career because of what happened,’ she said.

Stepping down from the stand on Tuesday afternoon after two grueling days, Siebel Newsom was still crying as she left the courtroom.

Jennifer Siebel Newsom, the wife of California’s governor, Gavin Newsom, is pictured in court on Tuesday testifying against Harvey Weinstein 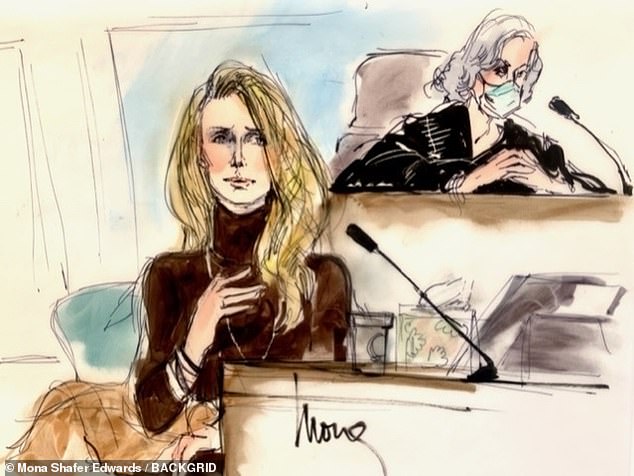 Siebel Newsom, 48, claims that Weinstein attacked her in a Beverly Hills hotel in 2005 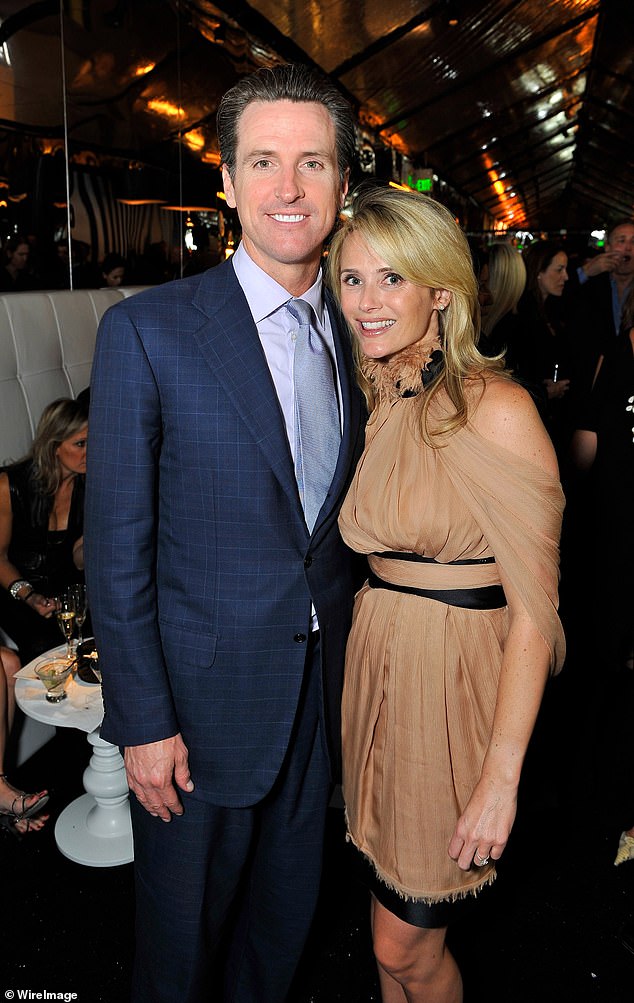 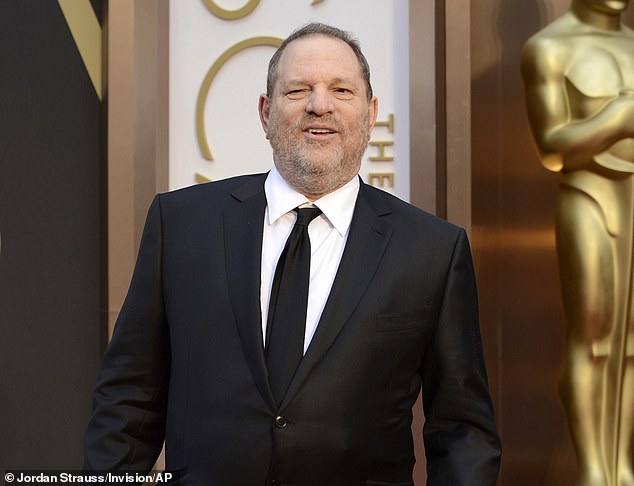 Weinstein is pictured at the Oscars in 2014. He is serving a 23-year sentence in New York, but is being tried in Los Angeles on rape charges

Now a mother of four and the First Lady of California, she was an aspiring actress aged 30 in 2005 when she met Weinstein.

She found herself unexpectedly alone with Weinstein in a suite at the Peninsula Hotel in Beverly Hills, where she had agreed to join him for a meeting. She said she assumed others would be present and they would talk about her career.

He emerged from the bathroom in a robe with nothing underneath and began groping her while he masturbated.

Siebel Newsom, who was set up on a blind date with her now-husband in 2006, said that she faked an orgasm to end her ordeal.

‘It was to expedite his experience so I could get out of there,’ she told the court.

She rejected the summary provided by Mark Werksman, Weinstein’s attorney, who said: ‘The purpose of you having an orgasm was to get him to finish having sex with you.’

She replied: ‘He wasn’t having sex with me.

‘I was making some noises to get him to finish, he had already raped me.

‘It was at the very end after I’d already been assaulted. And I left right after.’ 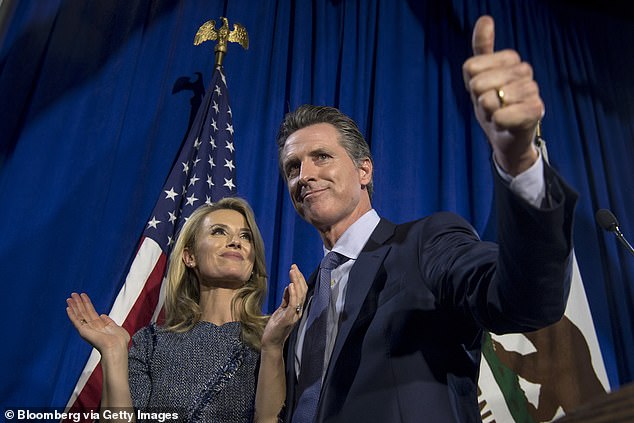 Siebel Newsom is pictured in 2018 with her husband, Gavin Newsom

Siebel Newsom said she did not remember telling police and the district attorney that she had touched his penis, as part of her attempt to end the ordeal.

Siebel Newsom, who is now a successful documentary maker, was pressed by Werksman about emails she sent to him after the attack.

Werksman noted that, by March 2007, ‘you’ve emailed him 18 times and seen him at least two or three times.’

Siebel Newsom insisted that it was because she refused to be defined by the alleged attack, and wanted to continue with her career.

Later, under cross examination, Siebel Newsom told Marlene Martinez, deputy district attorney for Los Angeles County, that she was trying to regain control of her life.

‘I was trying to not feel like a victim, and be able to live my life and take control back from somebody who had harmed me and violated me,’ she said. 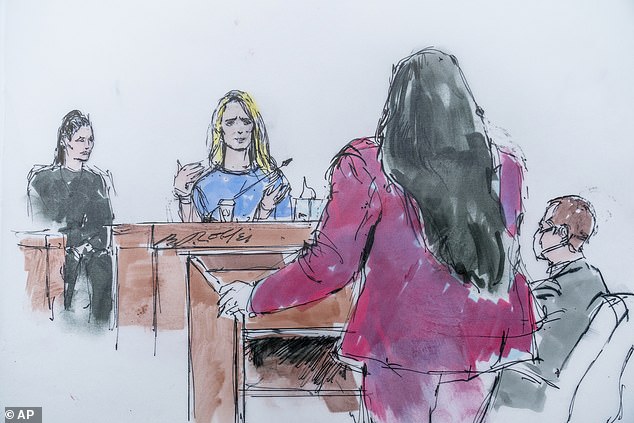 The mother of four is seen on Monday, testifying against Weinstein

Martinez asked: ‘When you went to the Peninsula, was it your intent to have sexual intercourse with Harvey Weinstein?’

Martinez asked if she told Weinstein no.

‘I did! I did with my voice and with my body.

‘I tried to be kind – I did by slamming my legs together.

The questioning of a distraught Siebel Newsom ended, and she quickly walked out the courtroom.

Her husband waited elsewhere in the courthouse, The New York Times reported; an aide said he would not comment on his wife’s testimony.

Platinum Jubilee: Jubilant revellers raise glass to Queen as they pack out pubs in...