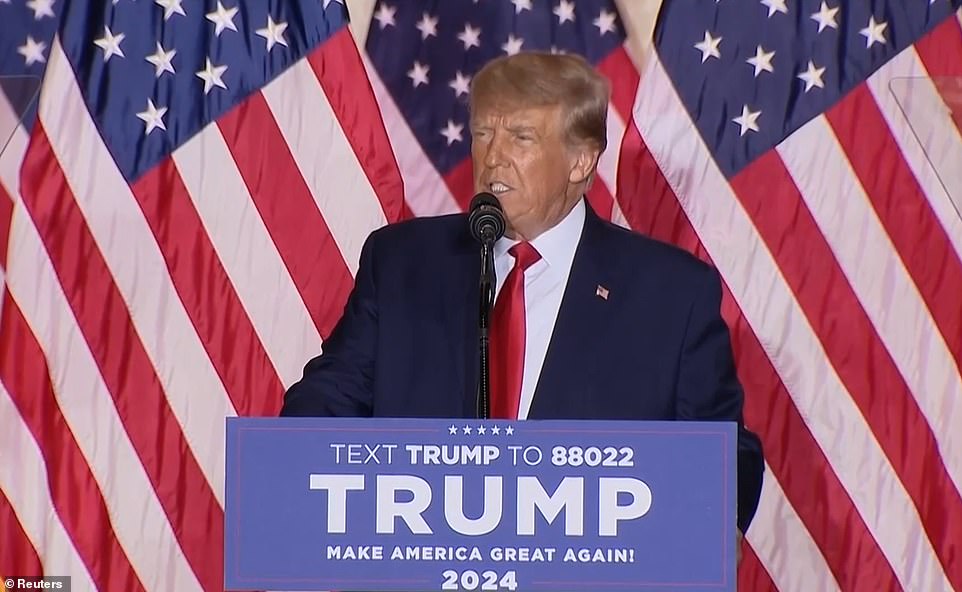 Donald Trump has revealed he is running for president for the third time in 2024.

The former president defied Republican critics and those who blamed him for the GOP‘s disappointing midterms to go full steam on stating his intent to be back in the Oval Office.

He filed paperwork with the Federal Election Commission just moments before he began his speech to supporters at Mar-a-Lago.

In his stately ballroom with opulent gold trimmings and chandeliers and in front of his family, he was introduced as the ‘next president’ to chants to ‘USA’.

‘America’s comeback starts right now’, he said, and then went on to attack President Biden for record inflation, ‘falling asleep at global conferences’ and making the U.S. ‘detestable’ with the rest of the world.

He said Afghanistan was the most ’embarrassing moment in the history of our country’ and tore into the Biden administration border policies that have led to an ‘invasion’ and fentanyl ‘pouring’ into our country.

Trump’s announcement comes the same day as a new poll showed the ex-president with a commanding lead in a field of potential 2024 candidates, including Florida Gov. Ron DeSantis, who has yet to rule out his own White House campaign against Trump.

The former president has responded by calling the governor ‘disloyal,’ ‘average’ and ‘Ron DeSanctimonious’ amid a flurry of other insults.

Donald Trump has revealed he is running for president for the third time in 2024. The former president defied Republican critics and those who blamed him for the GOP’s disappointing midterms to go full steam on stating his intent to be back in the Oval Office 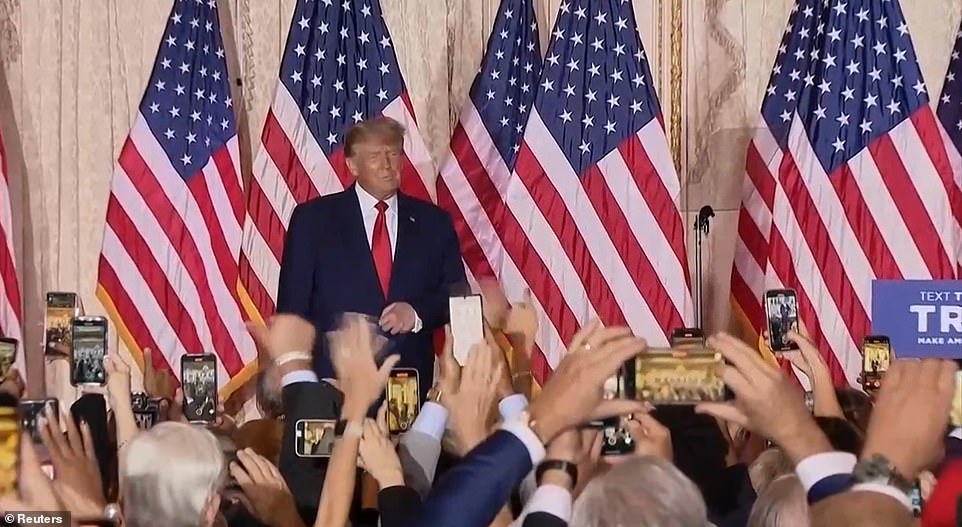 Asked about that criticism on Tuesday, DeSantis suggested he was unfazed – but went out of his way to target ‘the corporate media’ more directly than the former president.

‘When you’re leading, when you’re getting things done, yeah you take incoming fire – that’s just the nature of it,’ DeSantis said.

‘I roll out of bed in the morning, I’ve got corporate media outlets just having a spasm over the fact that I’m getting up in the morning. And it’s constantly attacking, and this is just what’s happened.’

He continued, ‘I think what you learn is, all that’s just noise. And really what matters is – are you leading, are you getting in front of issues, are you delivering results for people and are you standing up for folks? And if you do that, then none of that stuff matters.’

But DeSantis added as a final jab, ‘At the end of the day, I would just tell people to check out the scoreboard from last Tuesday night.’

Hours before the former president took the stage, advisers and allies like Jason Miller, Boris Epshteyn and MyPillow CEO Mike Lindell milled about the room.

Jason Miller told reporters that Trump would be laying out ‘all the campaign mechanics’ on Tuesday night. 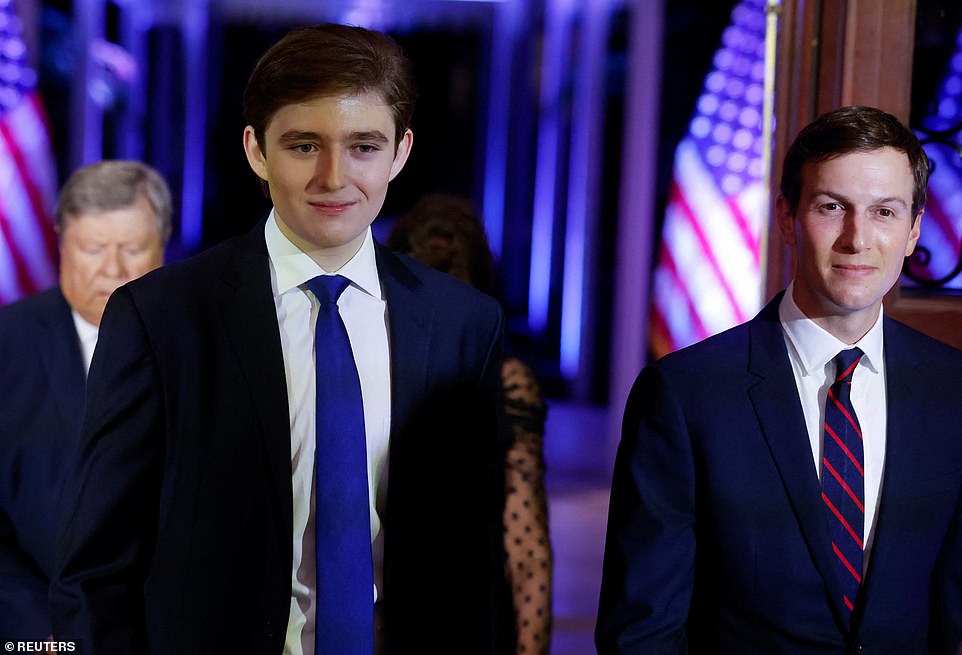 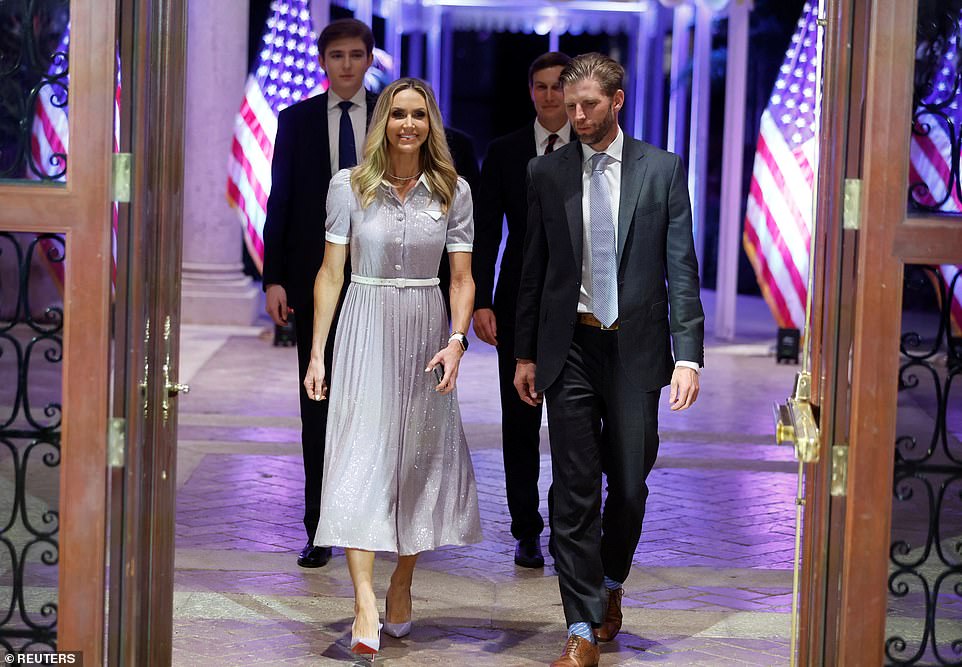 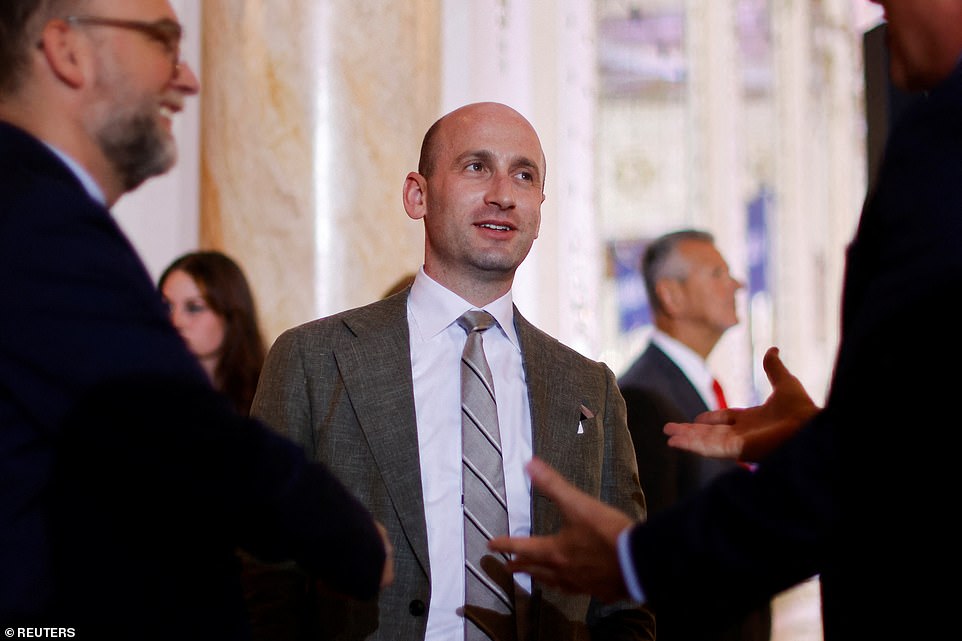 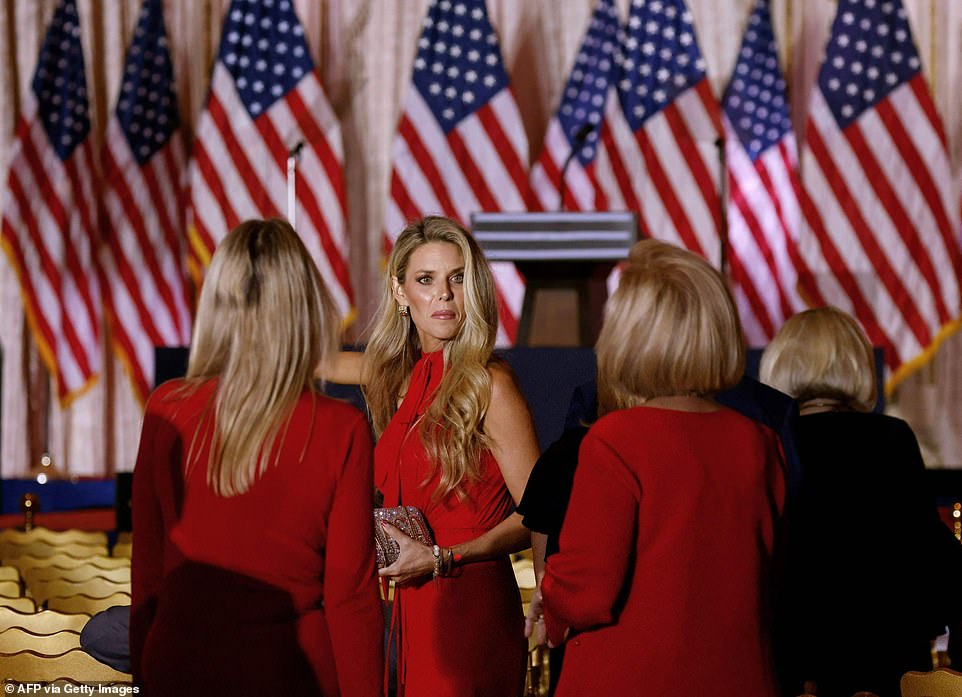 ‘Right now this is his vision, this is what his message is,’ Miller said. ‘Tonight and this week is really about his message.’

He added that President Joe Biden, who is assumed to be running for re-election but has not yet declared, is not making a splash among his own party with the idea of another campaign.

‘Democrats aren’t too excited about his prospects, and you have President Trump with a strong clear vision to get the economy back on track,’ Miller said.

Lindell fielded questions from outlets including DailyMail.com just before 6pm on Tuesday – three hours before the show was set to start.

‘If he said now – announces he’s running, 70 percent of America wants him to run for president because he’s still our real president,’ the entrepreneur said.

Asked about DeSantis’ potential challenge to Trump, Lindell scoffed, ‘Are you for real?’

‘If says he’s running – 100% even DeSantis, I believe, will say yes, I endorse him, because it’s a waste of time for anybody to run against the greatest president we’ve ever had,’ he later said.

Lindell, a prominent promoter of Trump’s 2020 election fraud claims, called Republicans’ failure to clinch a red wave in the 2022 midterm elections ‘a joke’ and a ‘set up’ when asked by DailyMail.com.

Lindell expressed that he believed the Democratic sweep of the Senate was evidence of another rigged election.

The GOP’s lackluster performance in the 2022 midterm elections gave some in the party pause about Trump’s Tuesday announcement even before the event started.

Establishment figures, including former New Jersey Gov. Chris Christie, turned against the former president for endorsing fringe-right candidates who failed to gain traction with Independent and moderate voters in key races across the country.

But 47 percent of likely Republican voters still want Trump at the top of the ticket, according to a new post-election poll from Politico/Morning Consult taken between November 10 and 14.

DeSantis comes in second, trailing Trump by double-digits with 33 percent of the hypothetical vote.

Trump’s former Vice President Mike Pence was polling at just 5 percent – with a number of prominent Republicans hovering around 1 percent.

Outside Mar-a-Lago supporters gathered in anticipation, while foes of the ex-president paid to have airplanes fly over the private club trolling Trump with banners including ‘You Lost Again Donald! #DeSantis2014’ and ‘3X BIGLY LOSER.’ 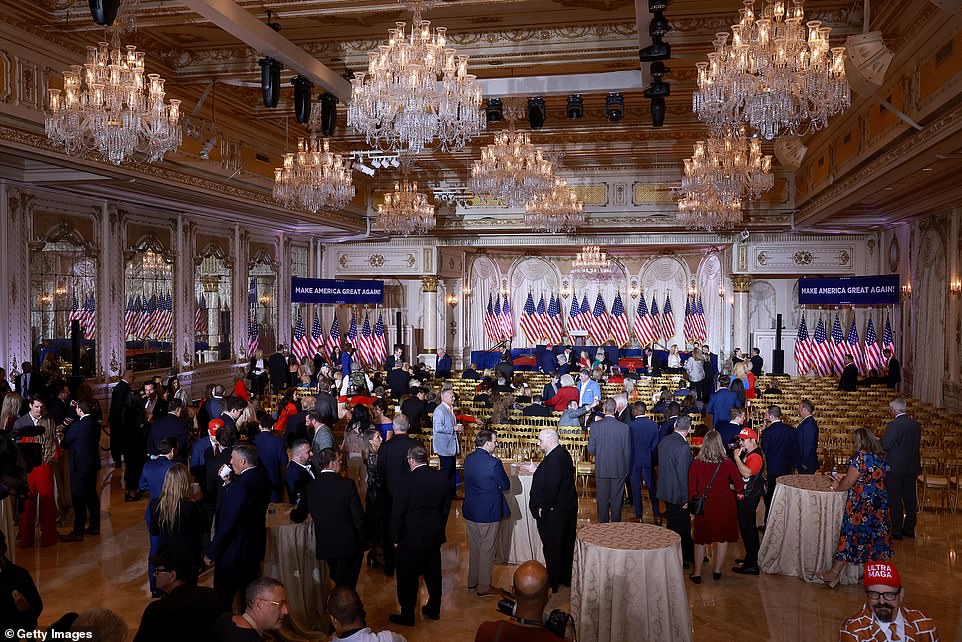 The ballroom at Mar-a-Lago was set up for a ‘special announcement’ Tuesday night, as former President Donald Trump is expected to launch another presidential bid 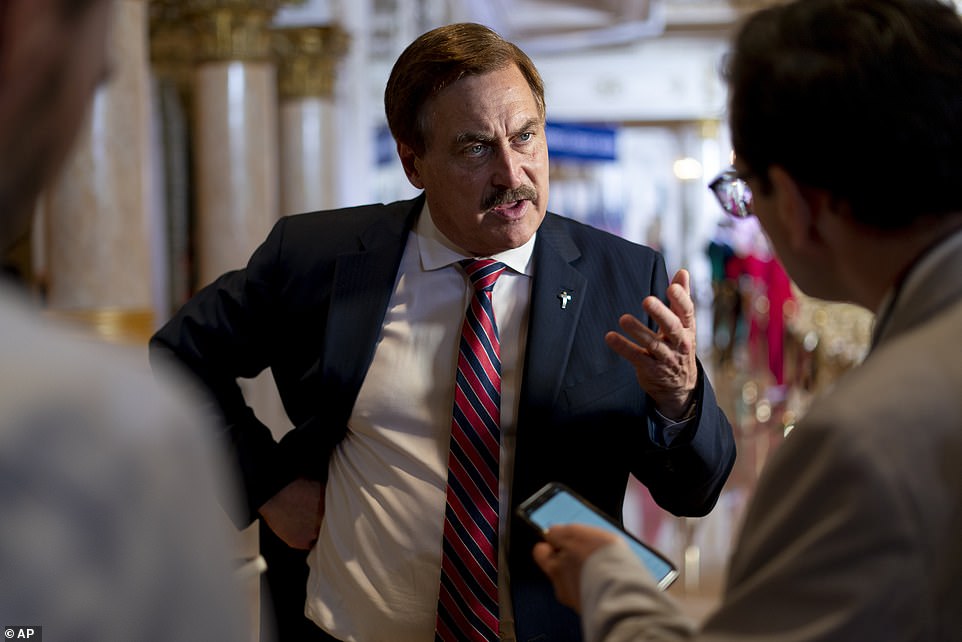 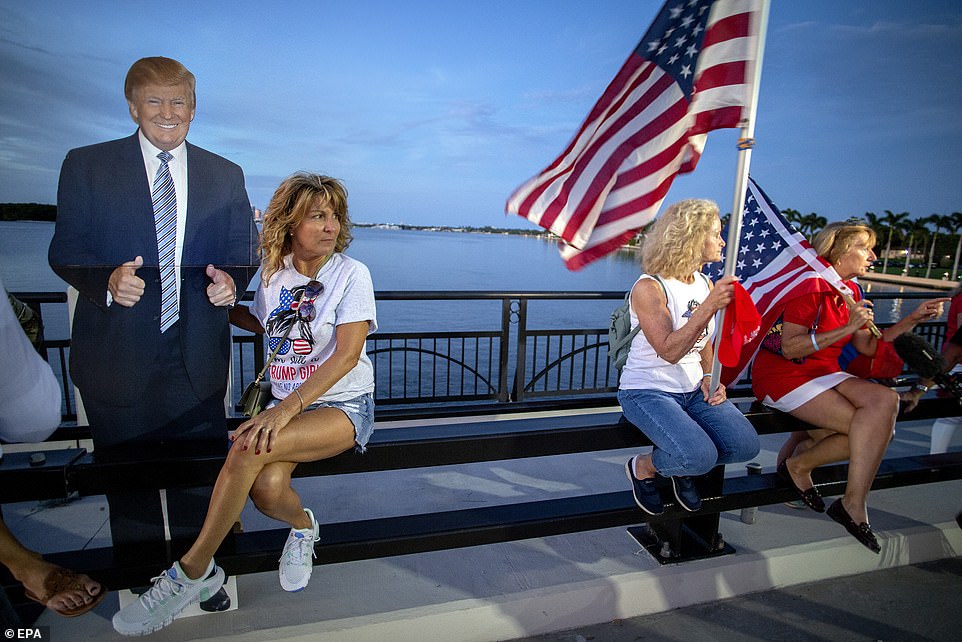 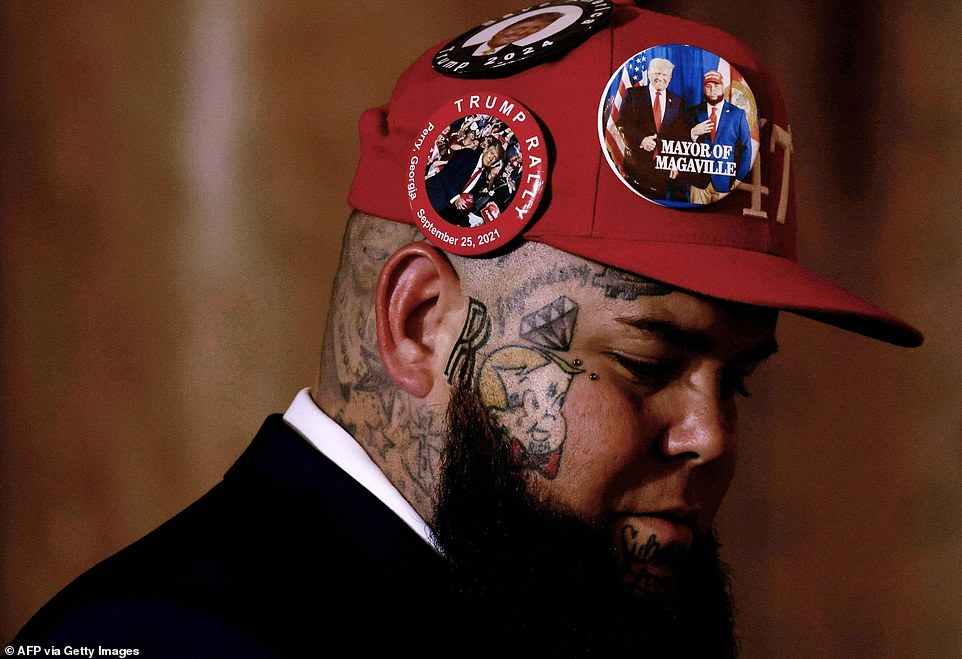 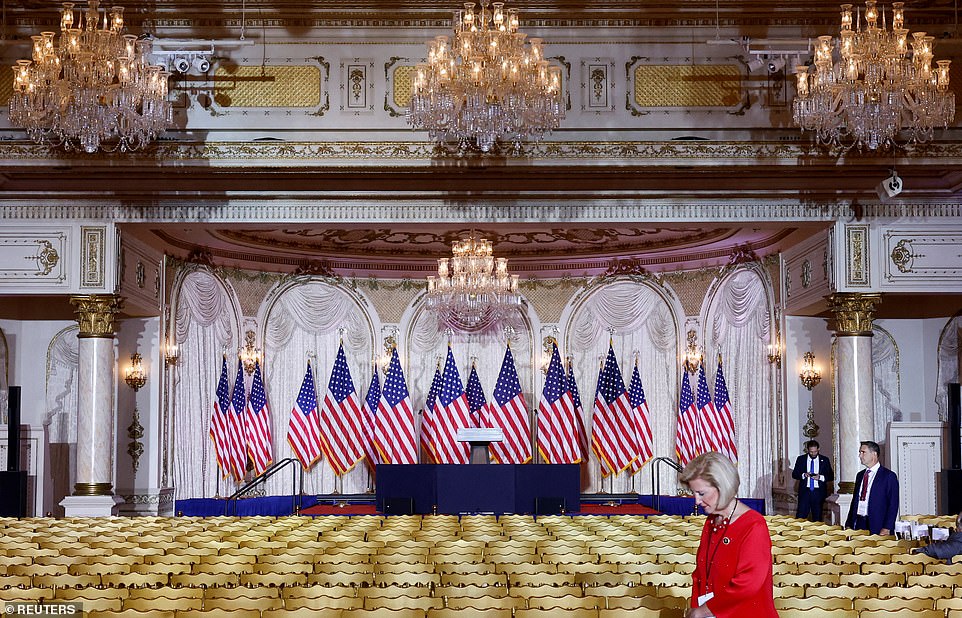 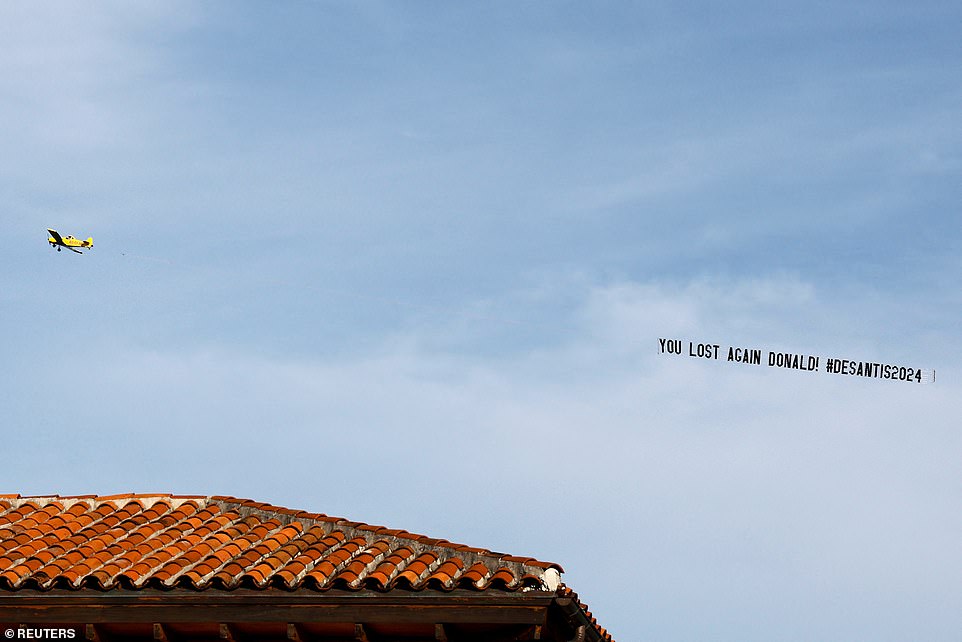 Foes of the ex-president paid to have airplanes fly over the private club trolling Trump with banners including ‘You Lost Again Donald! #DeSantis2014’ and ‘3X BIGLY LOSER’ 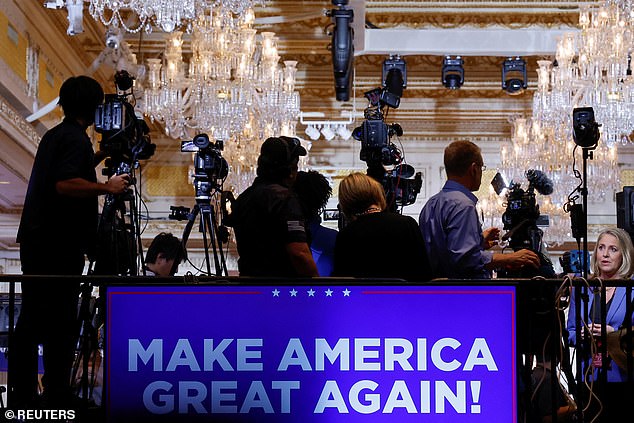 King Charles ‘set to axe a number of staff at Windsor Castle in the...