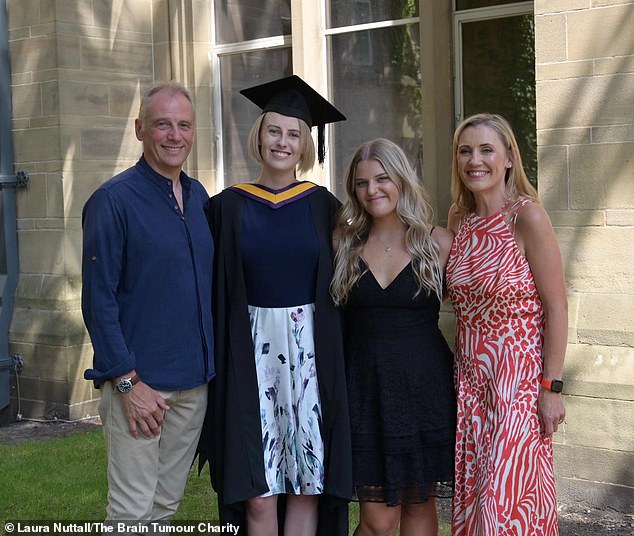 A 22-year-old woman living with terminal cancer who’s been treated to a Michelin star meal by Peter Kay says the comedian is ‘part of the family’ – after he came out of retirement to fundraise for her treatment.

Laura Nuttall, from Lancashire, who was diagnosed with a stage 4 glioblastoma in 2018, has gotten to know the comedy legend very well over the last few years.

Since Laura received her diagnosis in 2018 the creator of Phoenix Nights and Car Share has become a friend of the family and a ‘shoulder to laugh and cry on’.

The comedian even came out of retirement last summer to host a series of low-key gigs to raise money for Laura to receive specialist treatment in Germany.

Mr Kay recently treated the family to a meal at Michelin star restaurant The White Swan at Fence near Burnley.

But even though Mr Kay is now ‘part of the family’, according to Laura, his presence still stuns locals – with one customer the other week almost ‘choking’ on a chip when they saw him.

In an interview with the Telegraph Laura said: ‘My cheeks hurt from laughing after we’ve seen Peter. He’s helped us out at times when we really needed it.

‘Peter doesn’t make any conscious effort to be funny around us but he’ll take the mickey and it’s great. He comes here and he’s part of the family.’

Laura Nuttall, from Lancashire, who was diagnosed with a stage 4 glioblastoma in 2018, dined with the comedy legend and her close family (pictured above at Laura’s graduation) at the esteemed White Swan in Fence near Burnley 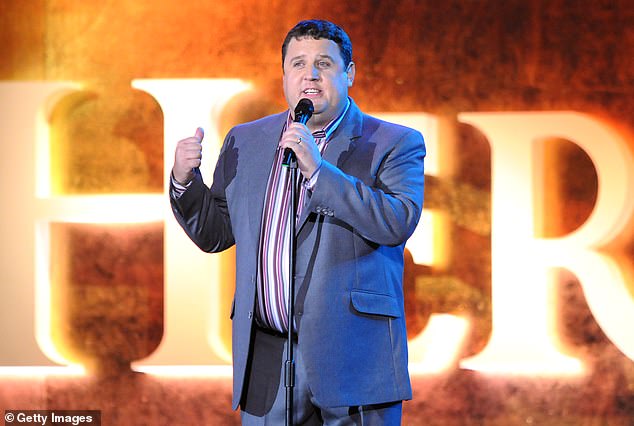 Laura told the Telegraph: ‘My cheeks hurt from laughing after we’ve seen Peter (Pictured). He’s helped us out at times when we really needed it’ (Pictured: Comedian Peter Kay performs live on stage during the Heroes Concert at Twickenham Stadium, in aid of the charity Help For Heroes, on September 12, 2010) 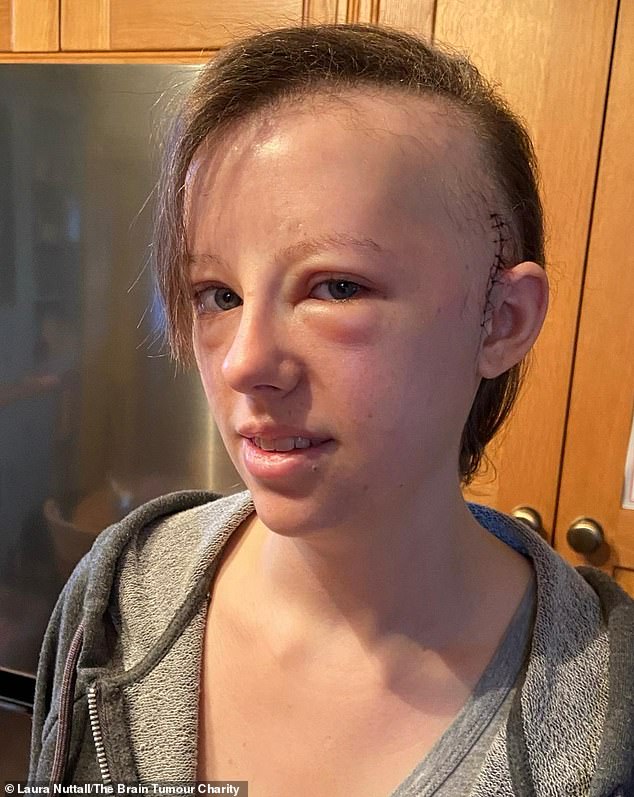 Laura, 22, pictured after one of her three operations to remove parts of her tumours, was determined to finish her degree after being diagnosed 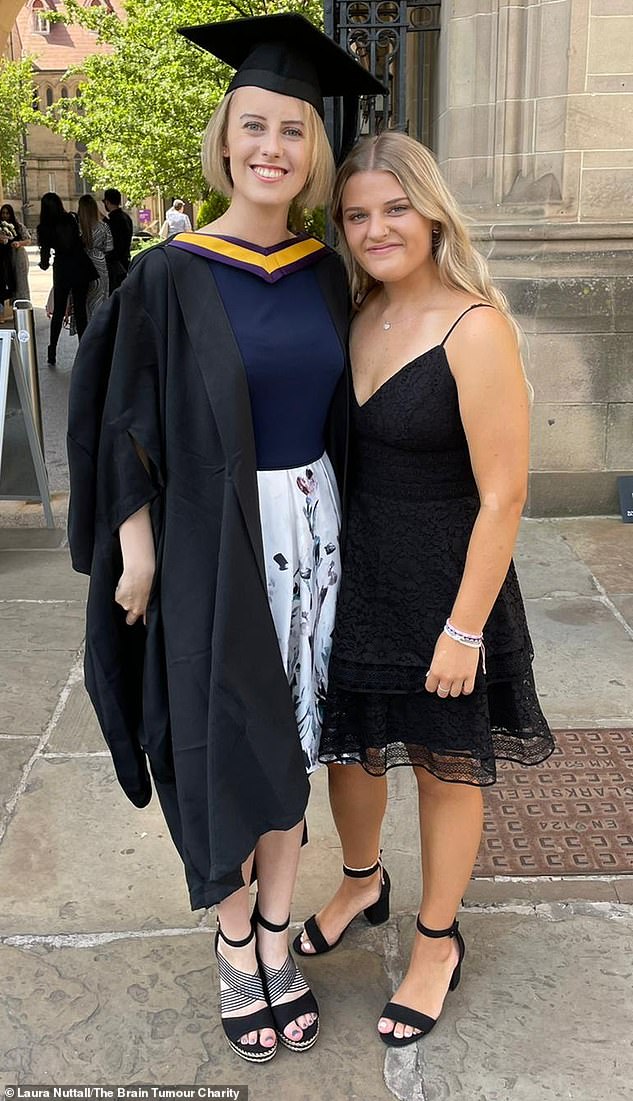 Laura (left with her sister Gracie, right) was diagnosed with stage 4 cancer aged 18 during her first year at University College London 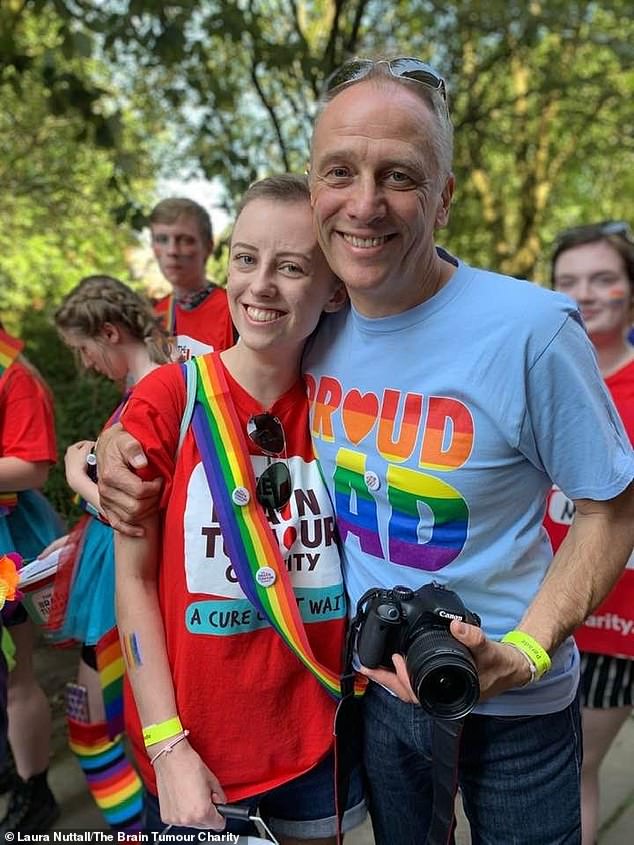 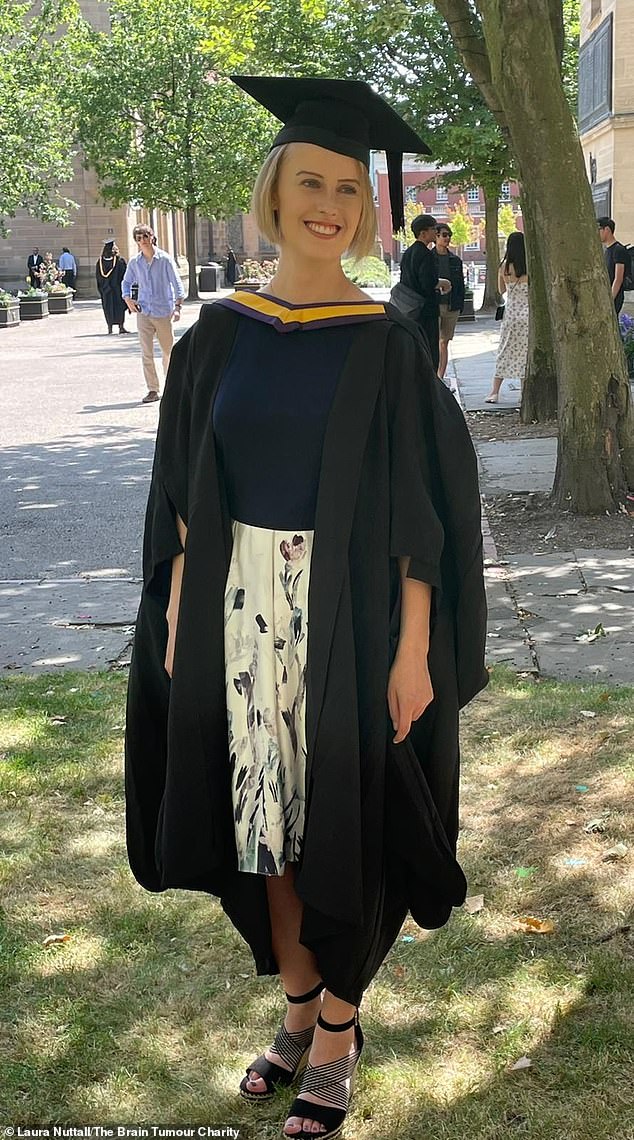 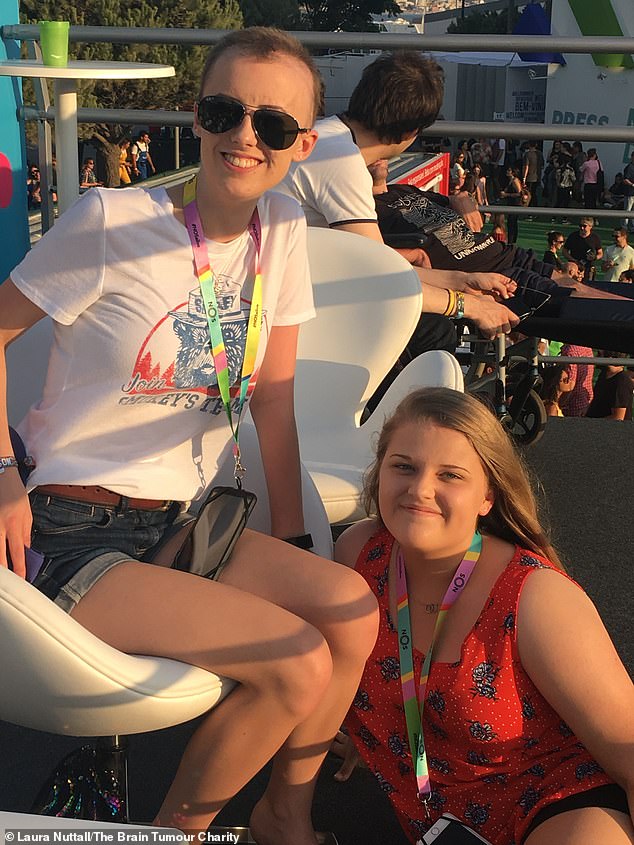 Over the last four years Laura (left) has had chemotherapy, radiotherapy, immunotherapy and four operations to reduce the size of her tumours

Laura was diagnosed with stage 4 cancer aged 18 during her first year at University College London.

At first she put her nausea and headaches down to Freshers Flu, but when things took a turn for the worst she began to be violently sick and called her mother Nicola, 52, and sister Gracie, 20, to travel down to the capital.

After a routine eye test, practitioners found swelling in her optic nerve and referred her to Moorfields Eye Hospital in Islington.

When they arrived they rushed Laura, who was barely conscious, to A&E where a CT scan revealed she had two brain tumours. The next day, a further scan revealed even more tumours in her brain.

Their fundraising efforts have given Laura the opportunity to receive medical advice from the US, take regular medication from Europe and India, and consume cannabis oil – with some studies suggesting it could treat some cancers and symptoms.

In March 2021 Laura had a second brain operation – after which her tumour grew back. By December she was back on the operating table, just one day before her 22nd birthday. 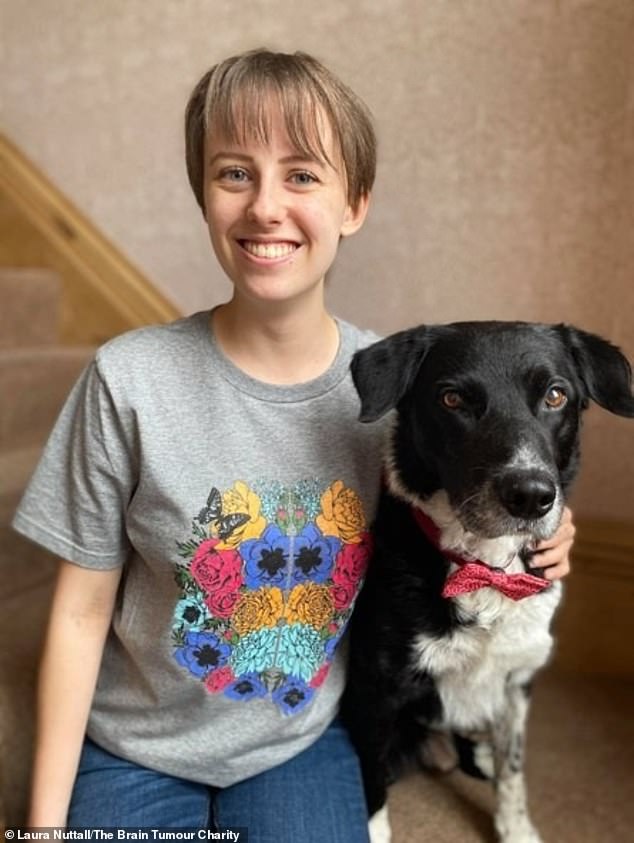 Laura, from Lancashire, thought her nausea and headaches were down to Freshers Flu at first until she began to be violently sick 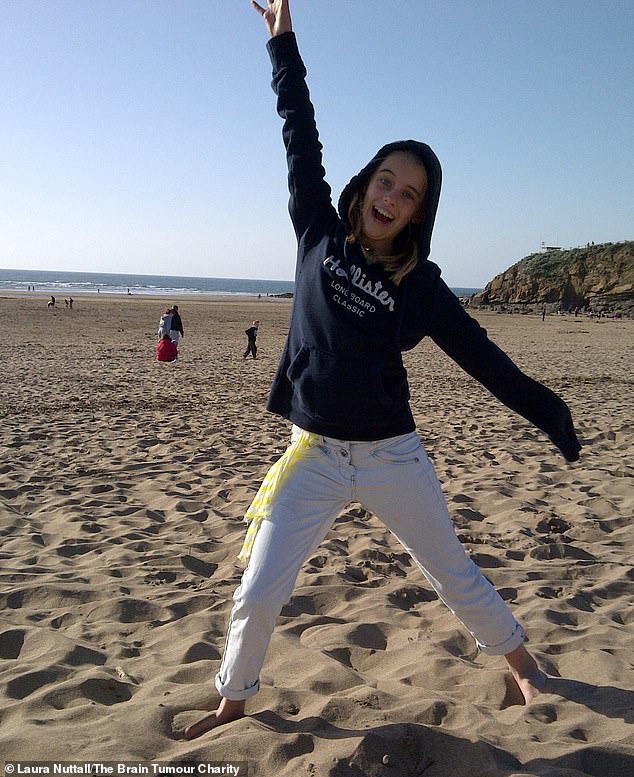 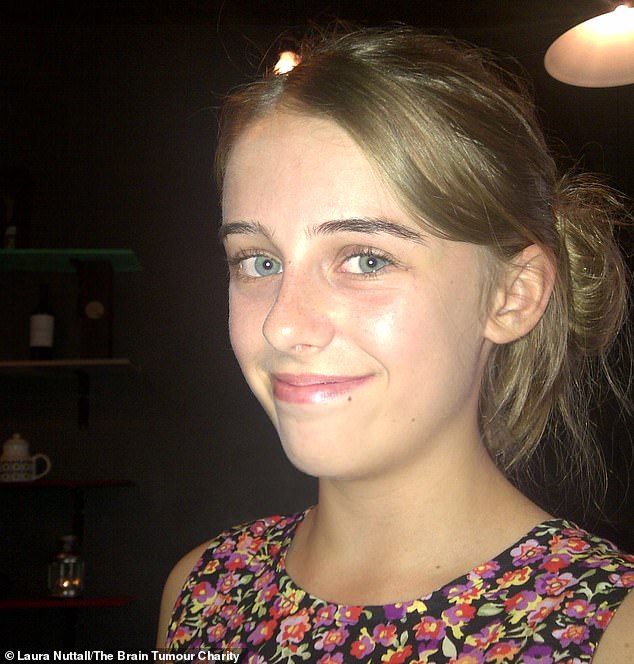 This month Laura received the devastating news the tumour had come back after a fourth round of treatment. 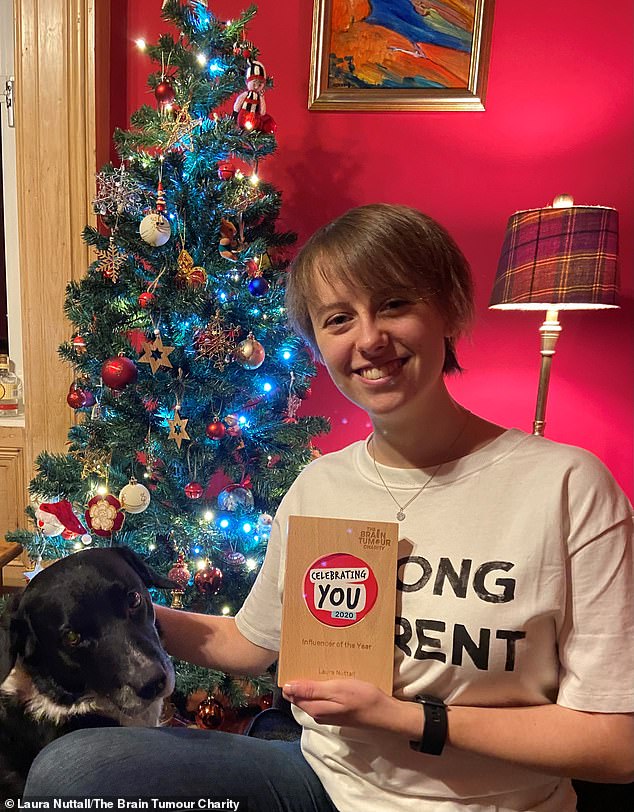 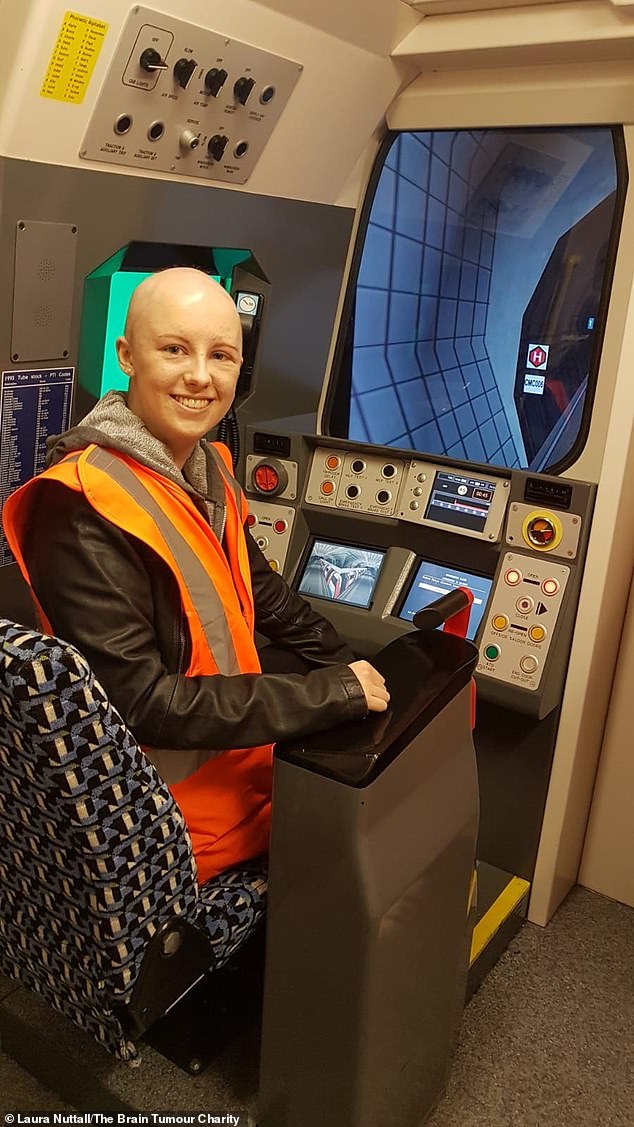 The family still intend to spend the day with one another, with the early dinner as a precaution

Despite four years of life-changing treatment Laura attended her graduation and braved sweltering temperatures to don her academic robes.

Laura graduated from Manchester University this year with a 2:1 in politics, philosophy and economics (PPE).

Speaking at her graduation ceremony, Laura said: ‘I started my degree on chemotherapy and finished it on chemotherapy with two brain surgeries in between – but I’ve made it.’

‘If someone tells me I can’t do something, it makes me even more determined to do it and prove them wrong – my family knows that all too well,

However this month the family received the devastating news that the tumour had come back after a fourth round of treatment.

Preparing for the worst, the Nuttall’s pulled Christmas forward to make sure they celebrate the festive season as a family.

Their kitchen door is donned with seasonal decorations while their Christmas tree is already up and wrapped in lights.

The family still intend to spend the day with one another, with the early dinner acting as a precaution. 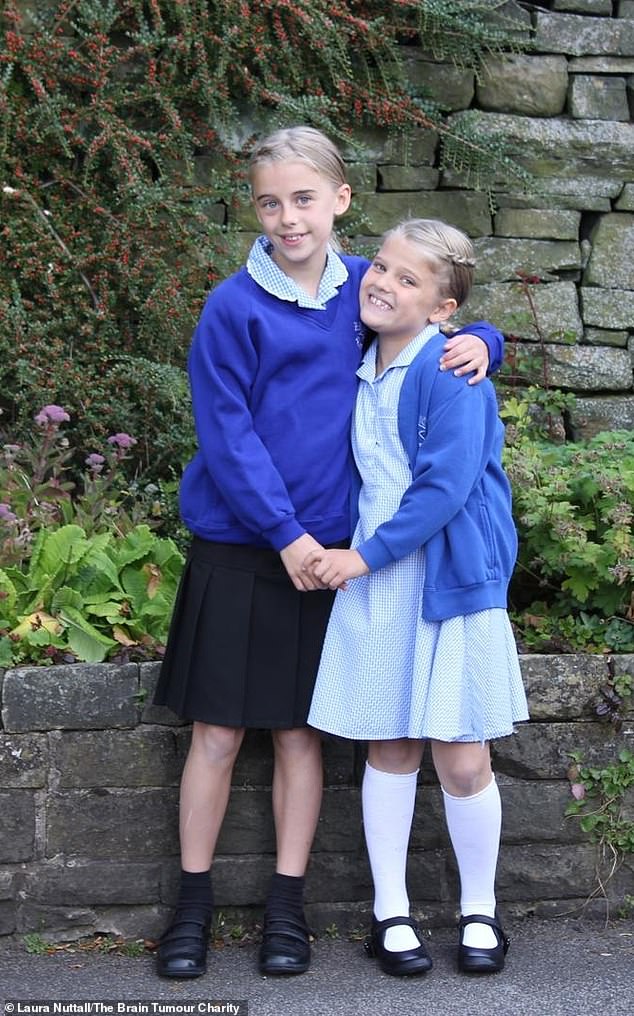 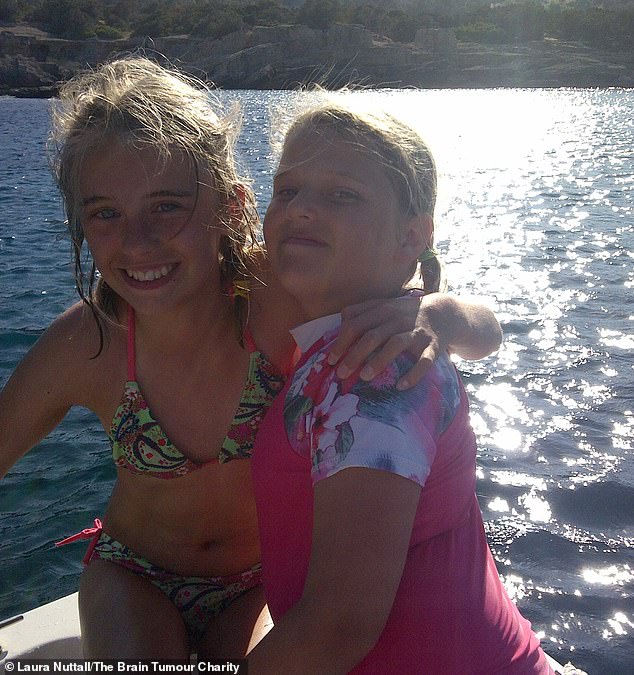 Laura (pictured as a child with her sister Gracie) has met Michelle Obama, gone fishing with Bob Mortimer and Paul Whitehouse and has stayed at the Plaza Hotel in New York 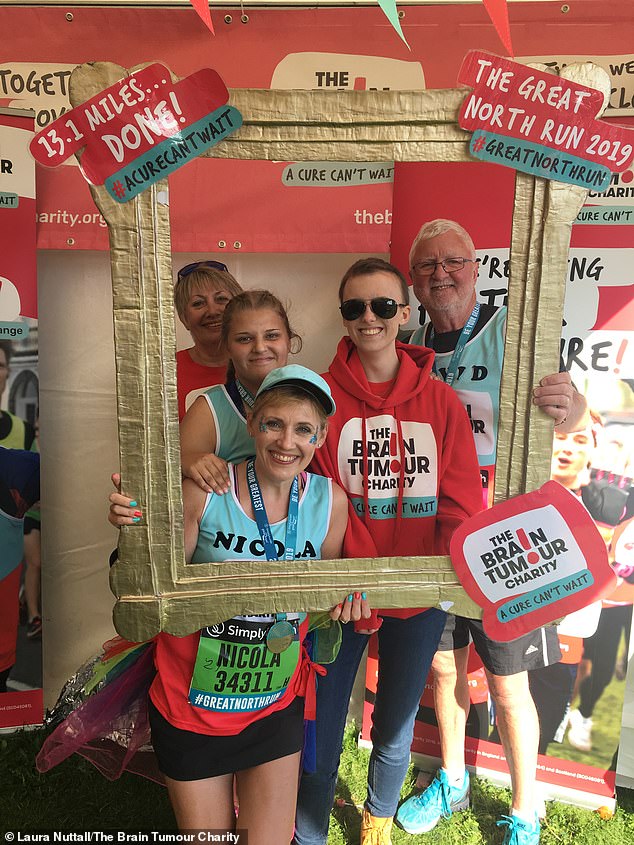 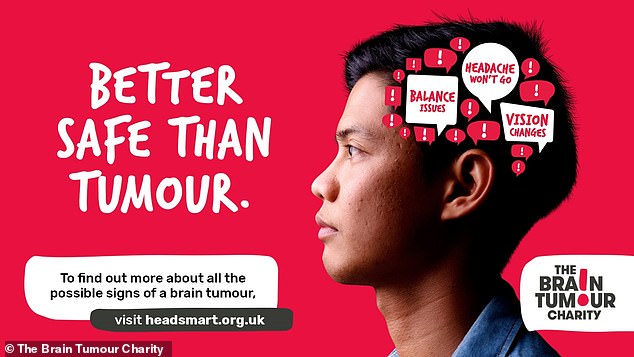 During her grueling course of chemotherapy and radiotherapy she has met Michelle Obama, gone fishing with Bob Mortimer and Paul Whitehouse and has stayed at the Plaza Hotel in New York.

Meanwhile the family have hosted a Ukrainian mother and her 12-year-old child in their home since the war broke out on the Continent.

Laura is now an ambassador for The Brain Tumour Charity and sits on the board for charity Our Brain Bank.

And as a result of Laura’s work at least one family has spotted the cancer in their own child, according to the Telegraph.

WHAT IS A GLIOBLASTOMA AND JUST HOW DEADLY IS IT? THE AGGRESSIVE BRAIN TUMOR SUFFERED BY LAURA NUTTALL

Glioblastoma is considered the most aggressive tumor that can form in the brain.

Patients have a 10 percent chance of surviving five years after their diagnosis, according to figures. The average lifespan is between 14 and 16 months.

Three adults per every 100,000 will be struck down with a glioblastoma, says The American Association of Neurological Surgeons (AANS).

It is most commonly found in men aged 50 to 60, and there is no link between developing glioblastoma and having a previous history with other cancers.

WHAT IS THE TUMOR MADE OF?

The tumor is made up of a mass of cells growing quickly in the brain, and in most cases patients have no family history of the disease.

It won’t spread to other organs, however, once it is diagnosed, it is nearly impossible to target, surgeons claim.

Unlike other types of brain cancer which are more specifically located, glioblastoma can occur in any part of the brain.

WHAT TREATMENT IS AVAILABLE?

Because the tumor likely already spread deep into the brain by the time it is diagnosed, the cancerous tissue is incredibly difficult to remove.

Surgeon will only ever remove the tumor, or part of the tumor, if it won’t do any damage to the surrounding brain tissue.

Dr Babcar Cisse, a neurosurgeon at the Weill Cornell Brain and Spine Center, told Daily Mail Online in July 2017: ‘By the time a glioblastoma is diagnosed, microfibers can spread to the rest of the brain which an MRI would not spot.

‘So even if the main tumor is removed and the patient receives radiation and chemotherapy, it will come back.’

Brain tumors are graded from between one to four, depending on how fast they grow and how aggressive they are.

Malignant tumors are either given a high-grade three or four, while benign ones are given a lower grade one or two.

Glioblastoma is often referred to as a grade four astrocytoma – another form of brain tumor, says the AANS.

Patients typically complain of symptoms such as confused vision, trouble with memory, dizziness and headaches.

The symptoms are somewhat nonspecific, and vary from person to person, and may not persist.

The disease is therefore impossible to diagnose based on symptoms alone.

One-eyed cat missing for over five years is found on a North Sea oil...

Biden says ‘no more drilling’, stumbles and is interrupted by a heckler at campaign...