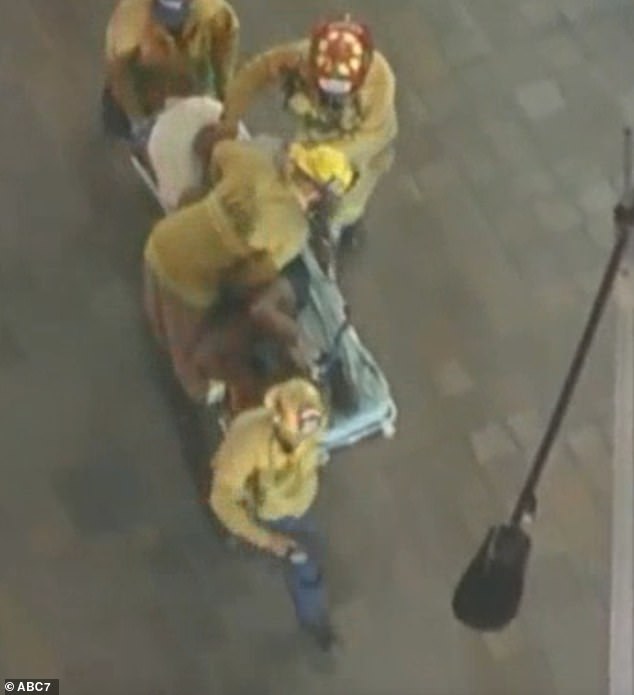 A homeless man randomly stabbed two people shopping at a downtown Los Angeles Target store before being shot dead by a security guard.

Los Angeles police say the suspect, a 40-year-old black man in ‘homeless attire,’ grabbed a large butcher knife off the shelf and stabbed a nine-year-old boy and a 25-year-old Asian woman in an unprovoked attack Tuesday night.

Police Chief Michel Moore said the suspect initially ‘confronted’ the young boy, who was shopping with his mother at the store at around 6.20pm and told him ‘he was going to stab him and kill him.

‘He repeated that more than once,’ the police chief said at a news conference following the attack.

The boy tried to walk away, Moore said, when the suspect grabbed the knife off the shelf at the store and stabbed the young boy near the intersection of 7th Street and Figueroa in a neighborhood known for its shops and hi-rise apartments.

The boy suffered a deep wound to the back of his shoulder and fell to the floor.

Meanwhile, the unidentified suspect continued to walk around the store, where he approached a 25-year-old woman and stabbed her ‘brutally’ in the chest.

Good Samaritans tried to help the woman, authorities say, and pulled her away to the pharmacy area of the store, closing the gate as she bled out. 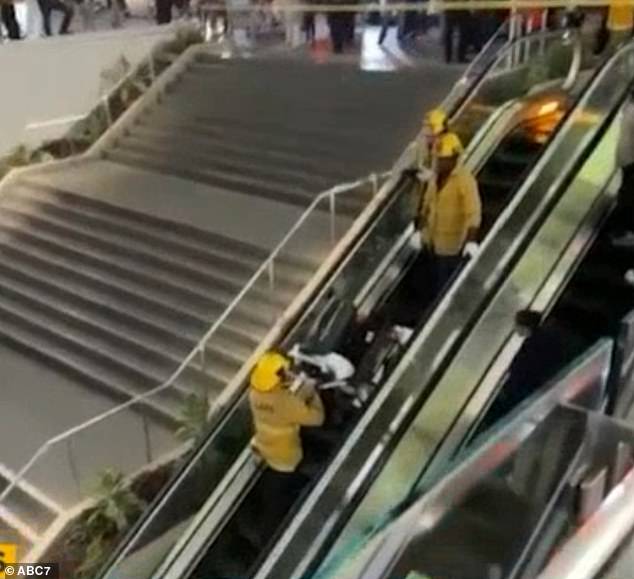 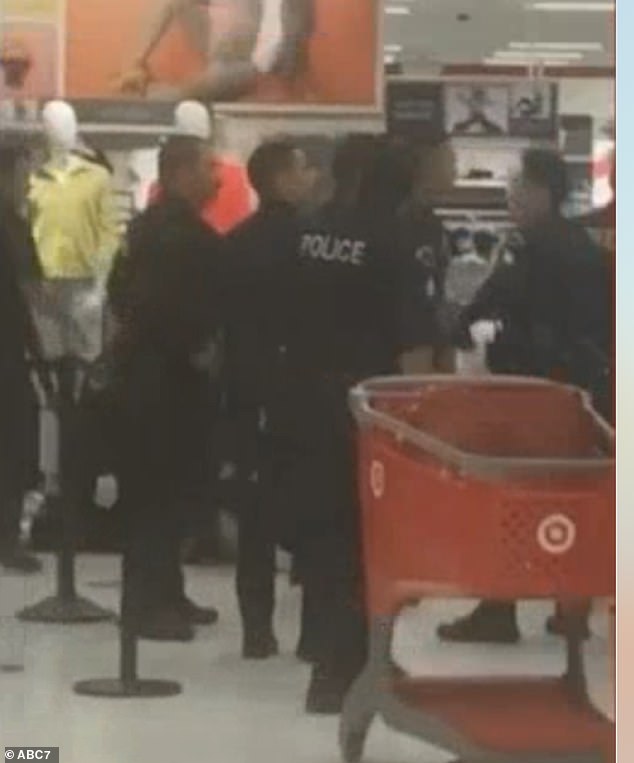 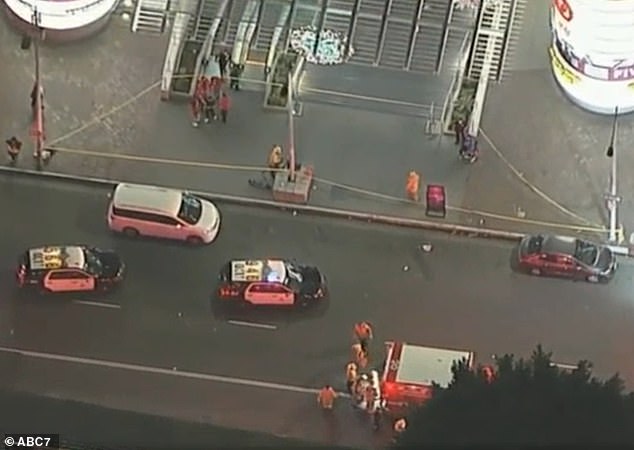 At that point, authorities say, the suspect approached a security guard at the front of the store.

The guard tried to de-escalate the situation and was going to use a baton to stop the madman, authorities say, but took out his gun as the suspect started to lunge at him with his knife raised.

The unnamed guard then shot the man in the torso, and authorities were able to take him into custody, but he later succumbed to his injuries at a local hospital.

He is not believed to have known his victims, who are not related to one another.

Moore said the boy underwent surgery and was in stable condition, but may have suffered potential neurological damage.

The woman, however, is believed to be in critical condition scheduled to undergo surgery Tuesday night.

A third victim was also injured in a stampede that broke out as worried shoppers tried to run out the store, and was also brought to a local hospital.

Fortunately, Moore said police were responding to another call at in FIGat7th shopping complex in the city’s Financial District when they learned of the stabbing.

Authorities will now remain on the scene  reviewing security footage and collecting evidence as they continue to investigate the incident. 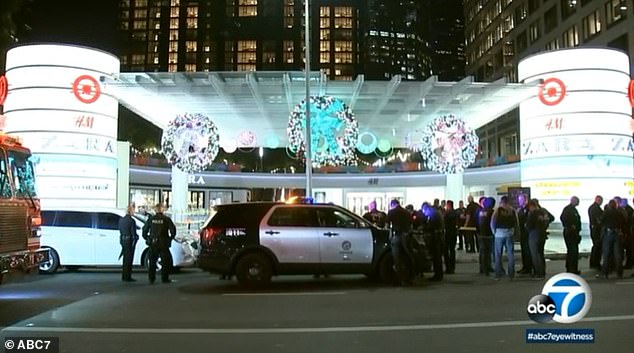 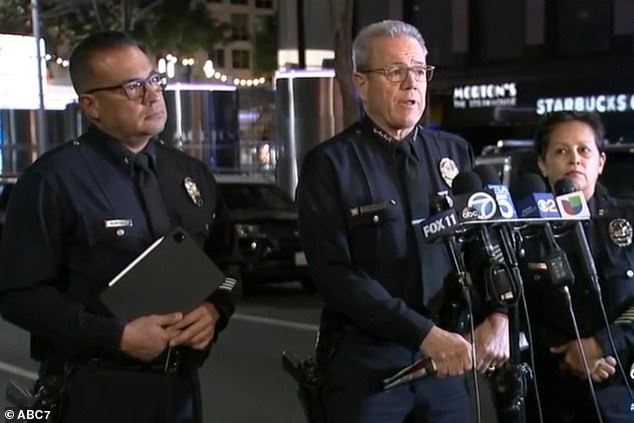 In a news conference, Police Chief Michel Moore said the boy underwent surgery and is in stable condition, while the woman is believed to be in critical condition

Shocked customers described the bloody carnage they faced before LAPD officers stormed on the scene and shoppers were told to evacuate.

‘Out of nowhere, we heard people screaming,’ Kevin Zaragoza, who was shopping with his younger brother, told ABC 7.

‘We rushed to the front,’ he said. ‘Right there by the exit, we see a girl on the floor, blood all over her.

‘After that, we see the whole LAPD swarming in there with shotguns, all types of stuff,’ Zaragoza said. ‘It was crazy.’

Franky Munoz also told KTLA how he thinks he saw the man saunter into the store, spewing racist remarks at him.

And once the rampage started, witnesses say, employees started screaming ‘He has a knife’ in a desperate attempt to get customers to flee the scene. 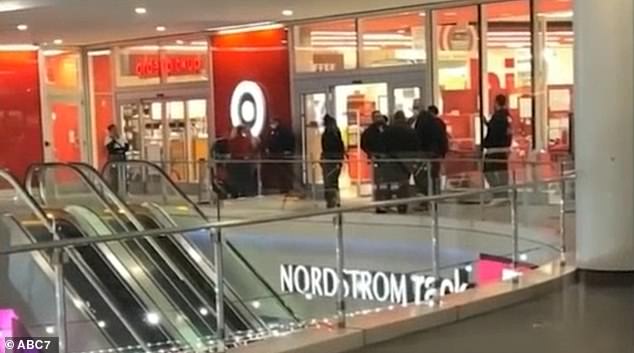 LAPD officers are said to have ‘swarmed’ into the store with their shotguns. They are pictured outside the Target store following the rampage 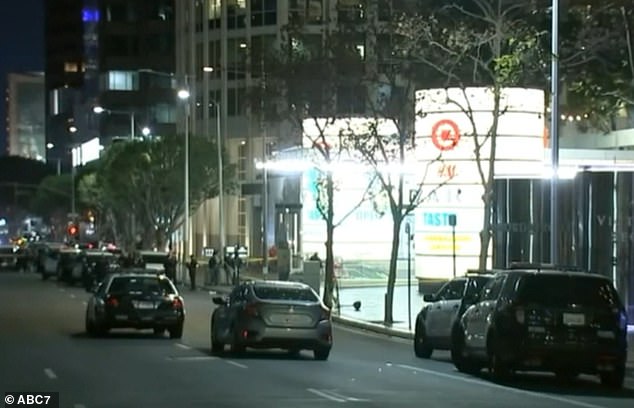 Missing toddler Quinton Simon’s mother is charged with his murder

Lady Sarah Chatto, the Queen’s beloved niece, is back at Royal Ascot for Ladies...