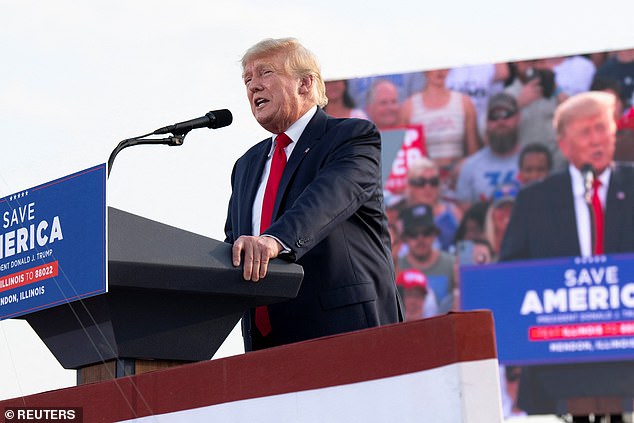 ‘It’s a s**tshow:’ Republican donors are tiring of Trump and the ‘exhausting circus’ surrounding the ex-president as January 6 hearings continue on through summer

Republican donors are getting tired of the Trump ‘s**tshow’ and the ‘exhausting circus’ surrounding the ex-president as the January 6 hearings drag on through the summer.

‘It’s a s**tshow. Some donors are getting sick of the s**tshow,’ an adviser to Florida Gov. Ron DeSantis told Politico for a story out Sunday about Trump fatigue.

It’s DeSantis – who is starting to out-poll former President Donald Trump in surveys of GOP voters looking ahead to 2024 – who stands to benefit most from the January 6 hearings dragging Trump down politically, legally or financially.

Republican donors are getting tired of the Trump ‘s**tshow’ and the ‘exhausting circus’ surrounding the ex-president as the January 6 hearings drag on through the summer, Politico reported Sunday 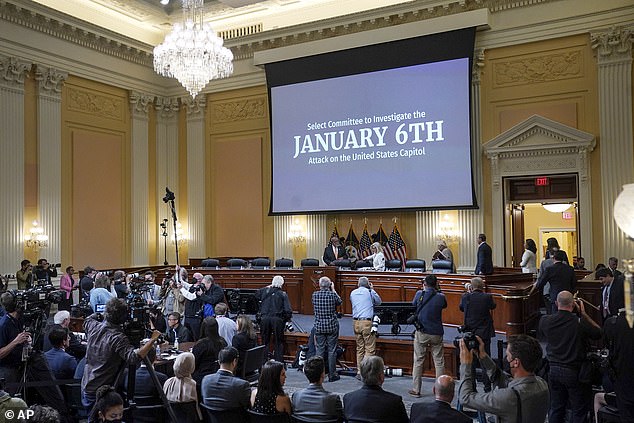 It’s unclear how the January 6 hearings will impact former President Donald Trump politically, legally and financially. Some donors and Republican voters are reportedly getting exhausted with the ‘circus’ while Trump’s base stays glued to his side

‘I think the January 6 hearings are [a] continuation of the exhausting circus that surrounds Trump,’ the DeSantis adviser continued. ‘There are of course the lunchbox Republicans who think this is a “mass conspiracy,” but among the donor class many are just tired of this.’

‘Trump is facing an important onslaught of negative facts with these hearings and there is no real defense,’ Eberhart told Politico. ‘He has no friendly members on the committee and there aren’t facts to put in front of the public to make any of this sound less bad.’

The Florida governor, according to a consultant in his orbit, thinks that the January 6 hearings could impact Trump legally – believing the Democrat-led House committee is laying the groundwork for the Department of Justice to indict the former commander-in-chief.

‘That’s where his head is at,’ the consultant told Politico. ‘He thinks the goal here is to get Main Justice to go after [Trump]. That’s what Ron thinks this is all about.’

The consultant also pushed that DeSantis is more focused on his 2022 re-election bid to the Florida governor’s mansion than looking ahead to 2024.

Most sources believed that Trump wouldn’t lose his base from whatever the hearings uncovered.

‘You’re antagonizing his supporters at a time when – some people are so impacted by inflation they can’t make ends meet,’ Trump pollser John McLaughlin told Politico.

‘If Congress wants to focus on a partisan kangaroo court and indict a president that [his supporters] think was successful at keeping America strong and had a better economy? They’re going to revolt – not a violent revolt but at the ballot box,’ McLaughlin said.

‘I learned my political chopes from James Carville, and he told me, “It’s the economy stupid.” It’s hard for me to go back on that and think that the only reason Trump is doing so well is Biden is doing so poorly on the management of the economy,’ Lanza said.

‘Nobody’s paying attention,’ he added of the hearings. ‘The hearing may matter until you get gas. Then you get gas, and you’re like “what the f**k is going on?”‘

But support for Trump might not translate to Republicans wanting him to run again.

Sarah Longwell, a moderate Republican who’s anti-Trump who conducts focus groups with voters, told Politico she’s seen a shift since the January 6 hearings started – with no participants in her last two focus groups saying they wanted to see Trump atop the 2024 ticket.

‘With January 6 they’re on Trump’s side, but they’re also exhausted by it,’ she told the publication. ‘It creates the sense of wanting to move on. The question is whether that sticks.’

‘I’ve seen it before when Trump’s baggage is out there they get annoyed about having to defend it, they drift away and come back,’ Longwell said.

PM faces summer of Tory discontent over Partygate amid threat of move to oust...

Priti Patel signs an order to extradite Julian Assange to the US to face...

If Churchill is sullied, the Left’s woke warriors can force anything on us, writes...