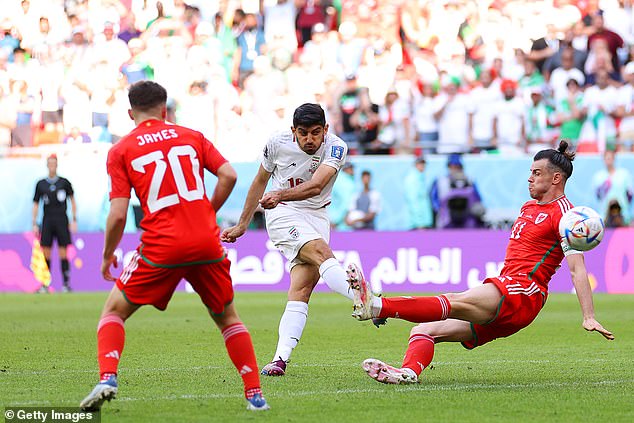 Wales’ World Cup dream is over after two injury time goals from Iran condemned them to a 2-0 defeat.

Goalkeeper Wayne Hennessey was sent off for a reckless challenge in a second half that also saw Iran strike the both posts within seconds before taking a deserved three points.

Wales were lucky not to be behind after struggling in the first half against Iran and VAR intervened to chalk off a goal against them for offside early in the game.

Shortly after half-time it was hearts in mouth again for Wales as Iran struck both posts within seconds of each other.

Iran’s Sardar Azmoun smacked one post from close range before Ali Gholizadeh curled an effort from outside the box against the other. 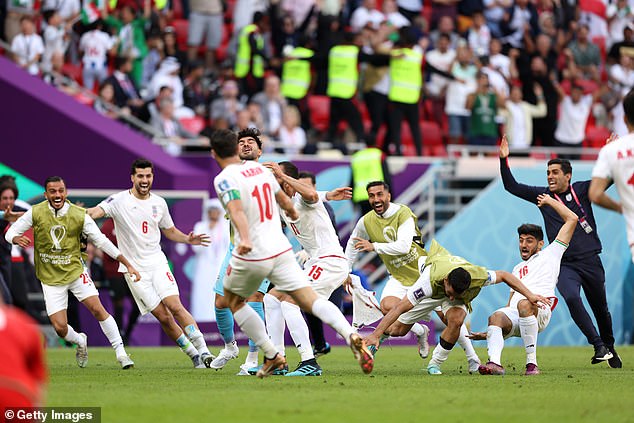 The final whistle sparked jubilant scenes on the pitch for Iran players, who have given themselves a chance of qualifying going into their final game against the US 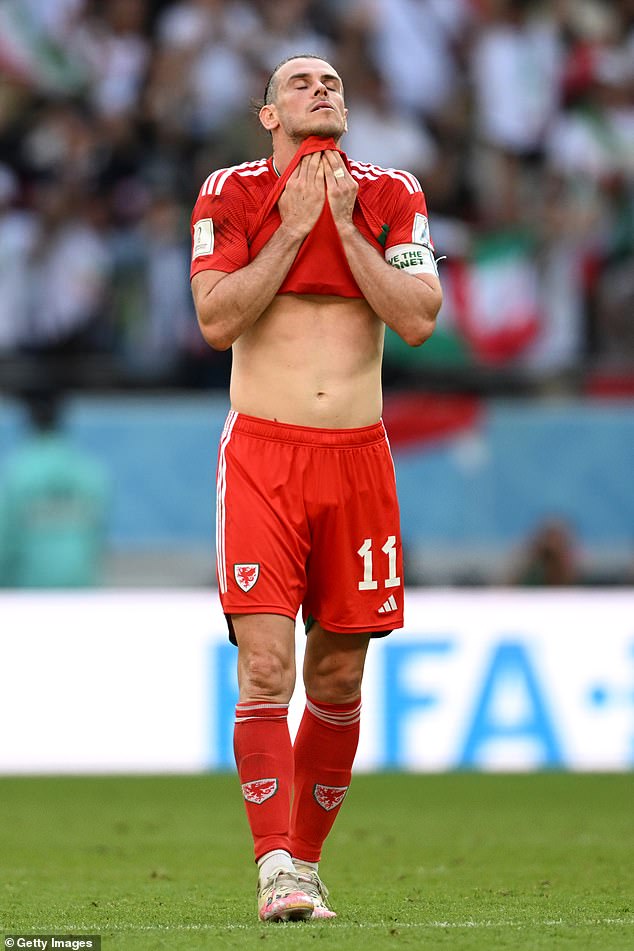 Gareth Bale of Wales reacts after the 0-2 loss

Wales then had goalkeeper Wayne Hennessey shown a straight red card with five minutes of normal time remaining as he rushed off his line to intercept a long pass.

Hennessey brought down striker Mehdi Taremi and received a red card for dangerous play after the incident went to the VAR officials.

There was little complaint from the Welsh players, with Hennessey’s knee close to Taremi’s head.

With a draw still likely to leave Wales needing to beat England, breakaway goals in injury time goals from Rouzbeh Cheshmi and Ramin Rezaeian secured a two-goal win for Iran, leaving Bale’s men with just a single point from their first two Group B games.

Mathematically, Wales can still qualify for the knockout stages, but they now require the US to beat England and Iran and will also need to beat an English side which won their opening game 6-2. 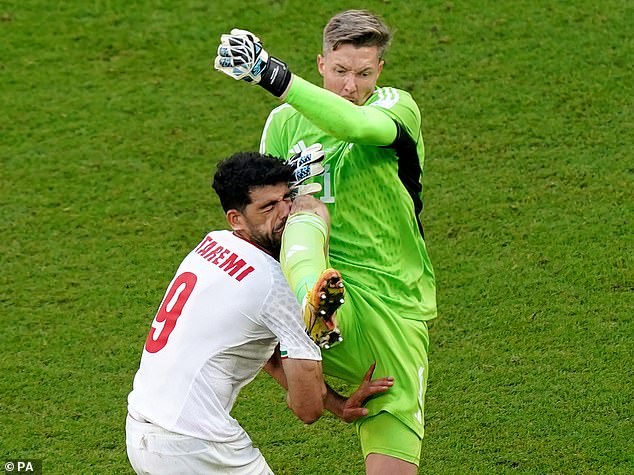 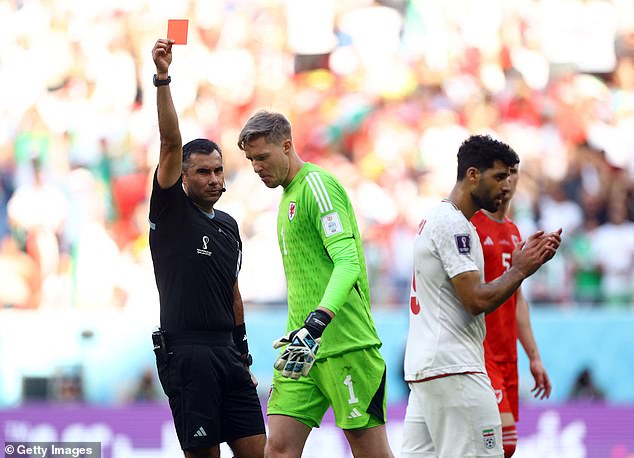 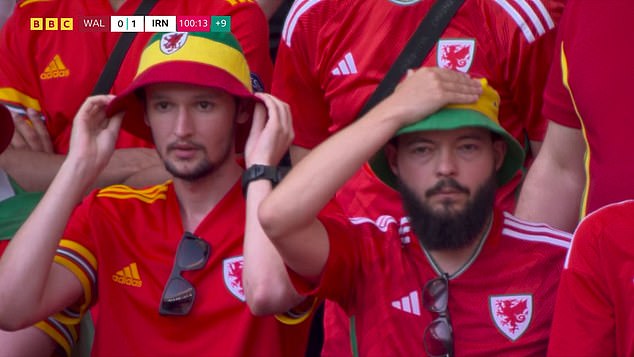 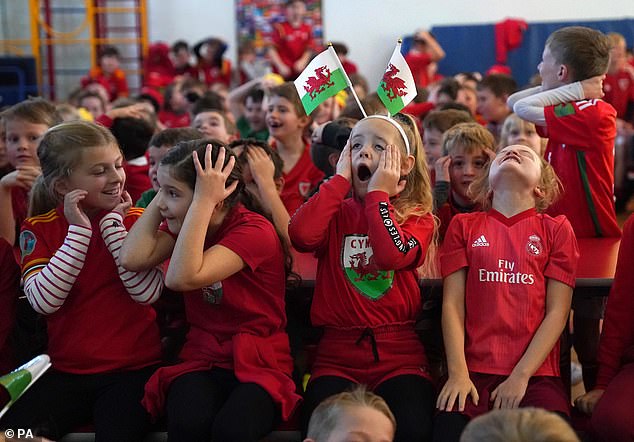 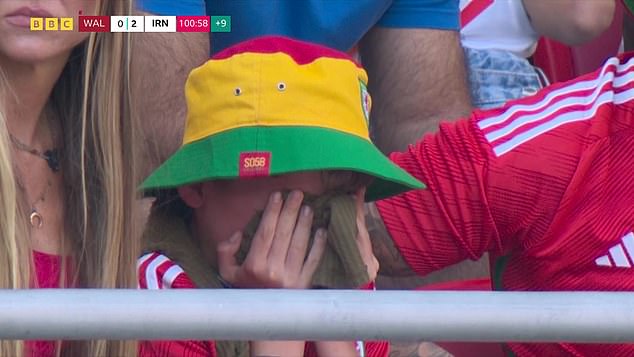 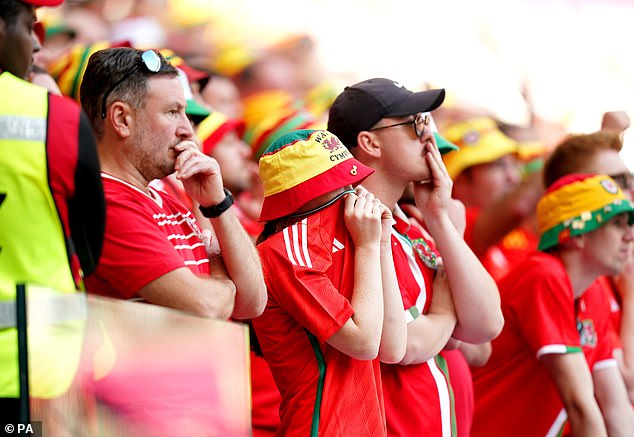 Wales fans appeared dejected as the final whistle was blown, ending the game and likely their World Cup 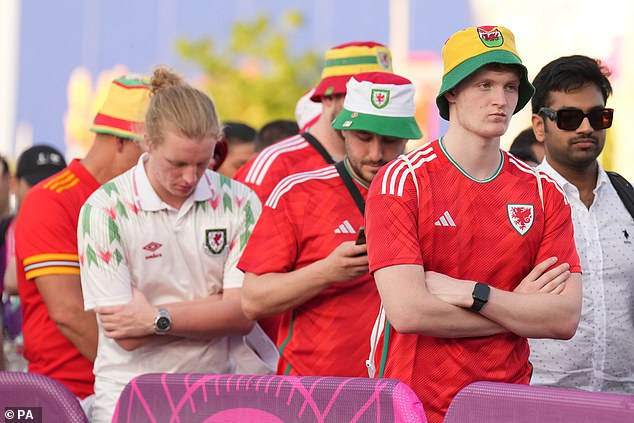 Gareth Bale admitted he was ‘gutted’ by the last-gasp defeat.

He told the BBC: ‘It’s gutting, we’re gutted, there’s no other way to say it. We fought to the last seconds but it’s difficult to take.

‘But we have to pick ourselves up straight away, it’s going to be difficult but we have one game left.

‘We will have to see. What can I say? We’ll recover and we have to go again.’

Hennessey’s rush of blood, when he raced out of his goal and wiped out Iran striker Mehdi Taremi, left Wales with an uphill struggle.

Bale added: ‘I haven’t seen so I don’t know – but obviously the red card changed the game completely.’ 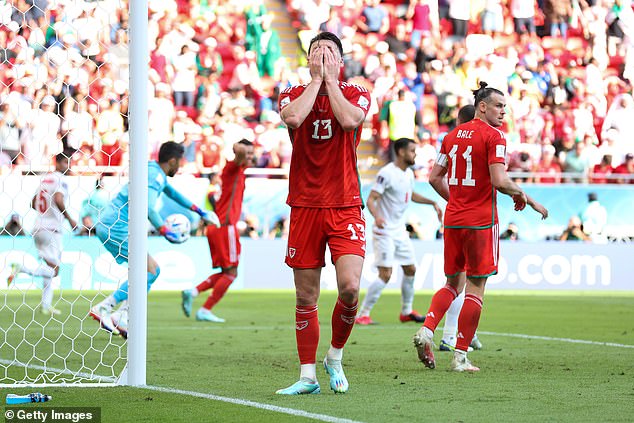 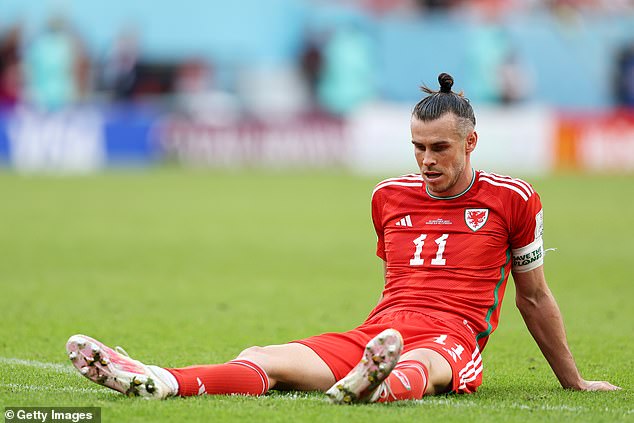 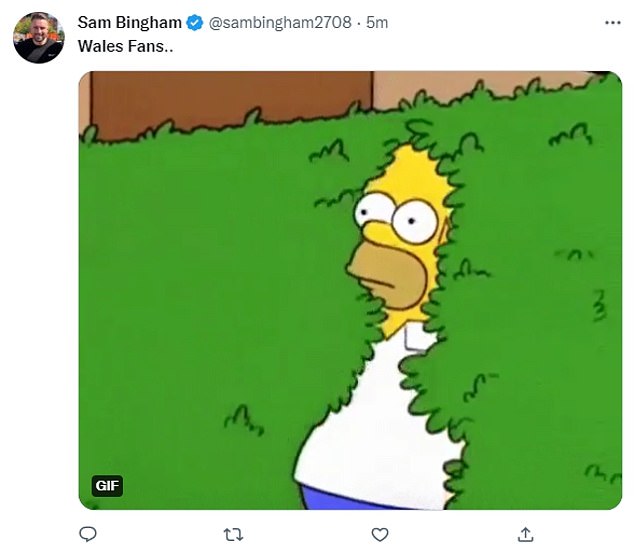 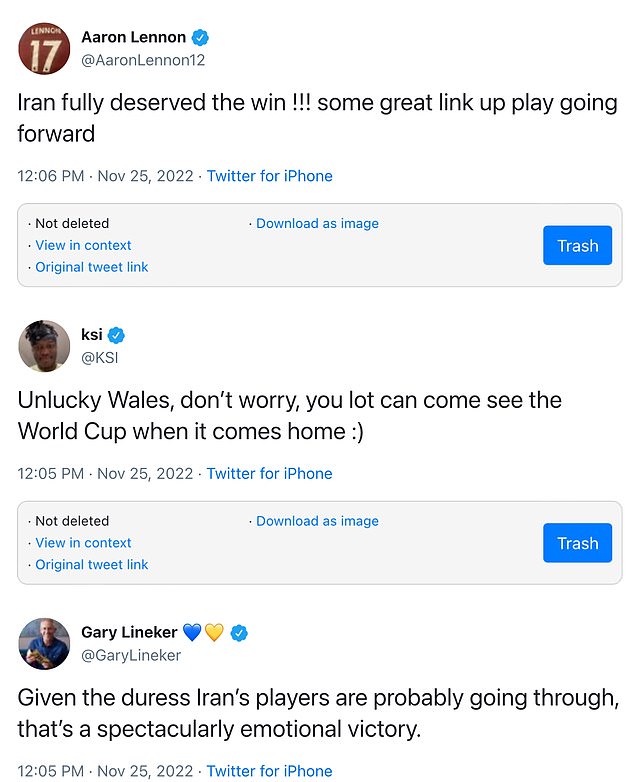 Earlier, Wales ran out to warm up wearing their Adidas training tops that feature rainbow sleeves, raising some eyebrows after Qatari officials stopped Wales fans from supporting gay rights by wearing rainbow bucket hats during their opening game against USA.

And there was laughter from Welsh fans as the Qatari sun hit water spraying from a sprinkler on the pitch, causing a real-life rainbow effect in the stadium.

Then prior to kick-off, thousands of Welsh fans belted out their national anthem and the Iranian fans jeered their own – in solidarity with protesters back home in Iran.

Iran’s players, though, appeared to back down from their protest following pressure from the Islamic regime. 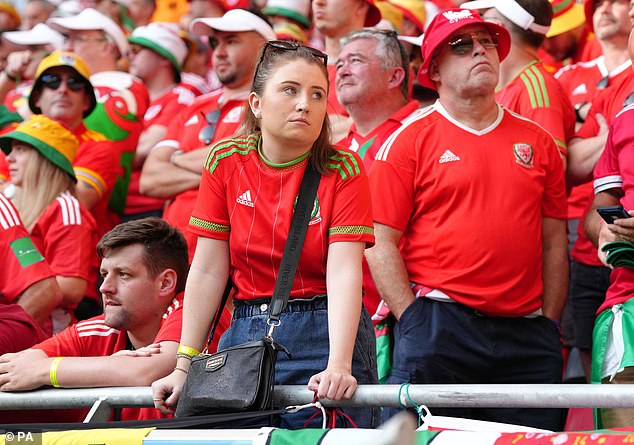 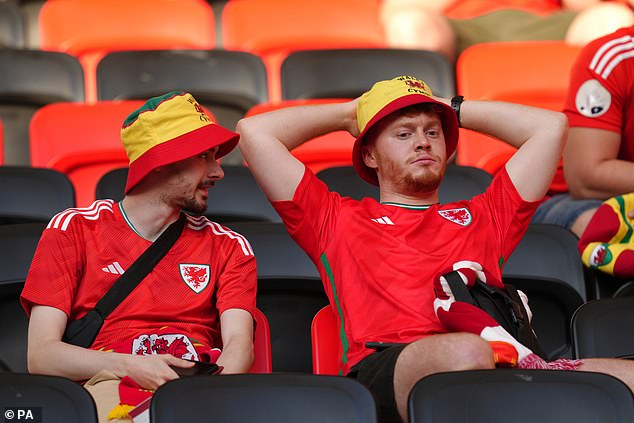 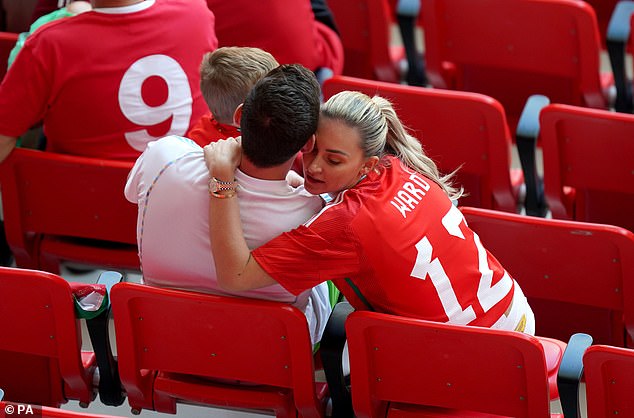 Wales goalkeeper Danny Ward, who was introduced as a substitute following Hennessey’s red car, pictured with his family at full time 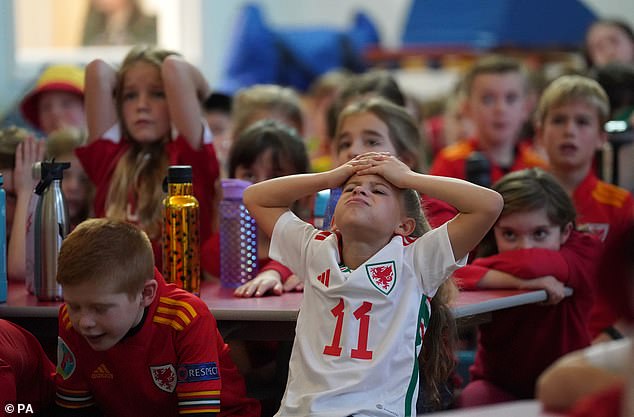 Schoolchildren, all wearing their Welsh football tops, look on in disappointment at Rhiwbeina Primary School, Cardiff 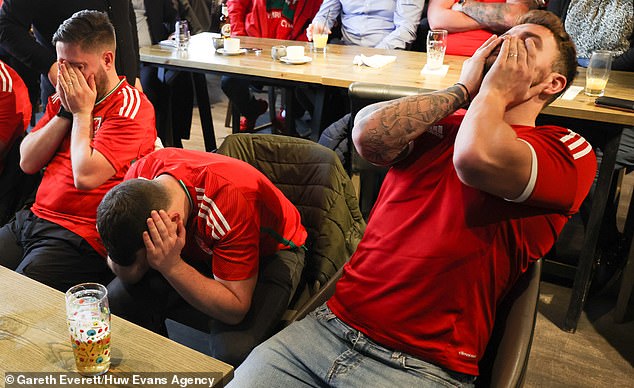 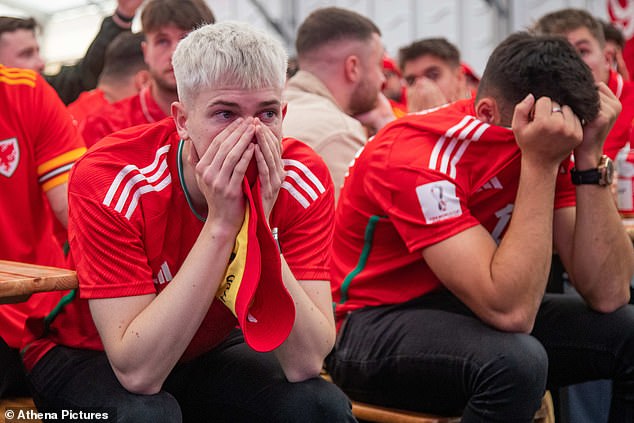 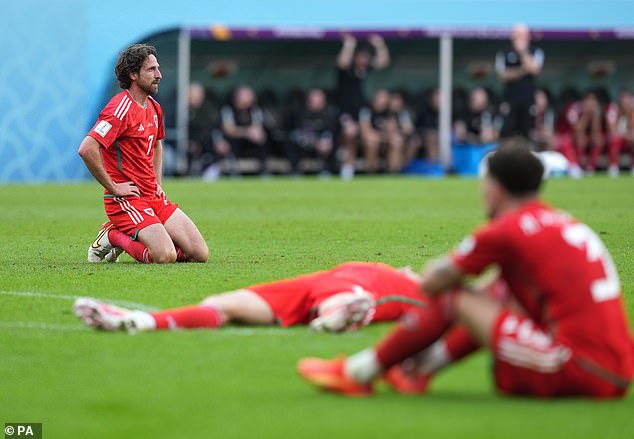 Their previous refusal to sing was a show of solidarity with protesters in their home country, hundreds of whom have been killed in clashes with government security services over the death of Mahsa Amini – a woman who died in custody after being arrested by the Tehran’s morality police.

But many Iranian fans in the stands still displayed slogans supporting the protests on Friday, drawing particular attention to human rights issues and the plight of women.

Qatari authorities took particular issue with one female fan, who had painted her face white – with bloody tears pouring out from her eyes.

She held up an Iranian football shirt displaying the name of Mahsa Amini and the number 22 – her age when she died.

Meanwhile, the Red Wall basked in bright sunshine and 29C temperatures as the sea of fans watched captain Gareth Bale and his teammates begin their match in Doha’s Ahmad bin Ali Stadium, which got off to a frenetic, end-to-end start. 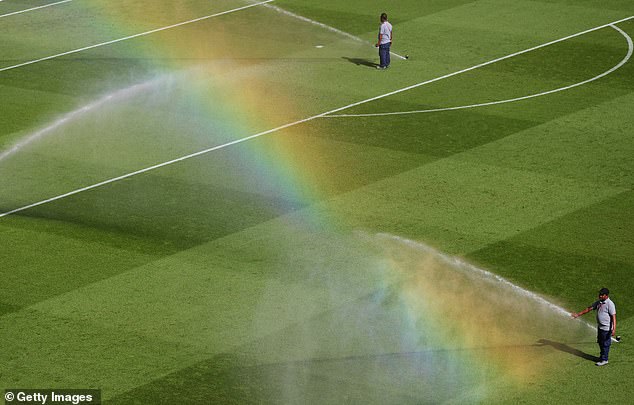 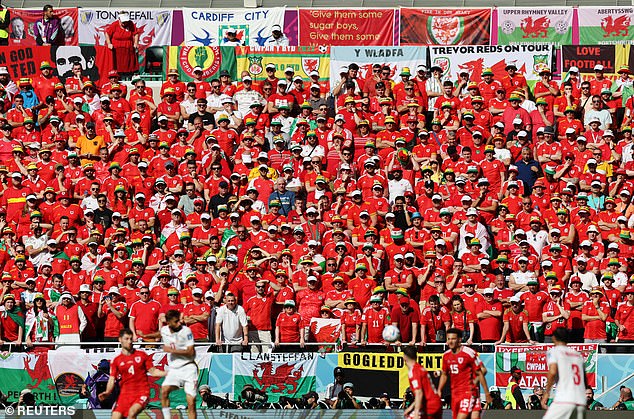 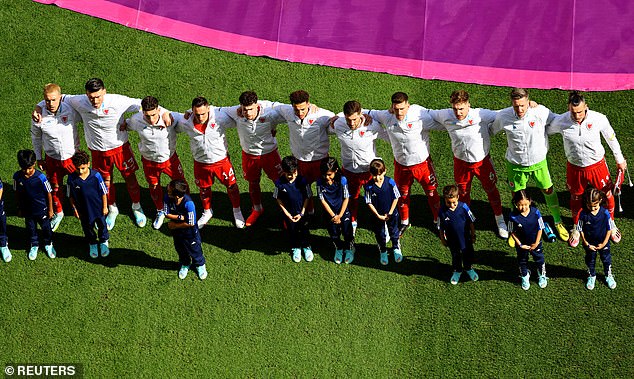 The Welsh team, led by captain Gareth Bale, belt out their national anthem ahead of the match against Iran

But in the build-up to the kick-off, attention was elsewhere. While some of Iran’s players gave a muted rendition of their anthem, their fans jeered as it was played over the stadium’s speakers.

Before kick off, anticipation was building outside the stadium and at the Corniche Walk Park, with pictures showing hundreds of fans in football kits, proudly waving flags emblazoned with the red Welsh dragon.

A sea of red shirts and bucket hats could be seen on the city’s waterfront, along with the Urdd Youth Choir and Yma o Hyd singer Dafydd Iwan, with the crowd belting out fan favourites including I Love You Baby, and the Welsh national anthem.

Around 5,000 Wales fans were inside the Ahmad Bin Ali Stadium to watch their team appearing at their first World Cup since 1958.

Among those watching the game back home in Cardiff were the children from Rhiwbeina Primary School.

Hundreds of students wearing Wales shirts and the now famous bucket hats filled the school’s hall to watch the match on a large TV screen.

Before kick-off, they sang Hen Wlad Fy Nhada and during the game broke out into a rendition of Yma O Hyd, which has become an unofficial anthem of the Wales team.

The school had been building up the tournament by watching Wales train at the Cardiff City Stadium and also were invited to see the squad off as they headed to Qatar.

England will play the US in the other Group B match today, with fans finishing work early to race home or head straight to the pub.

Today city and town centres are emptying already as England fans rush to watch the match – if they are not on the sofa already.

Bosses are also letting staff leave early after experts said there has been a massive increase in sickies.

One England megafan today revealed he quit his job so he can watch every World Cup.

Casey Bishop, 39, has refused to go to Qatar on human rights grounds but resigned as a sports assistant at Northumbria University in Newcastle so he doesn’t miss a minute of the football. 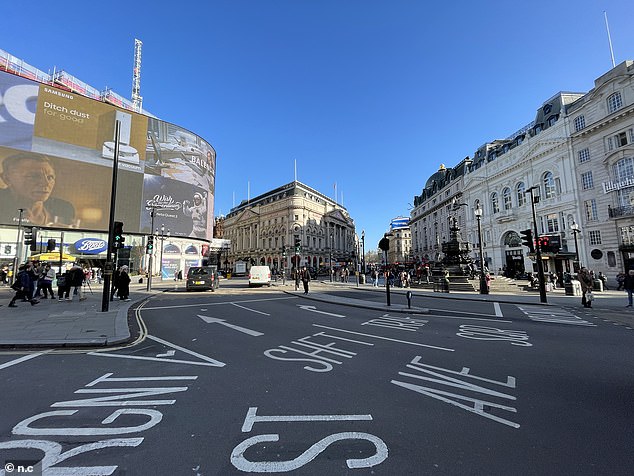 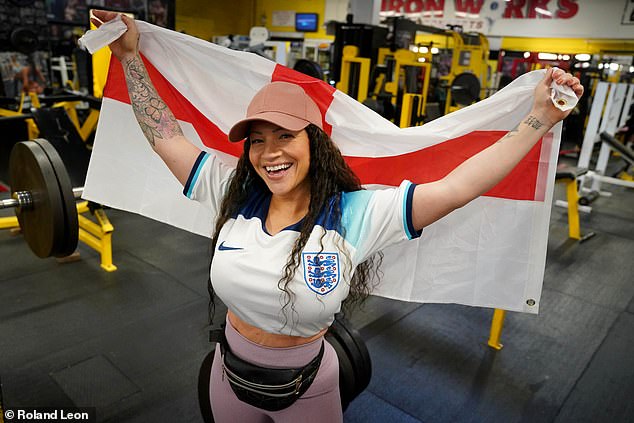 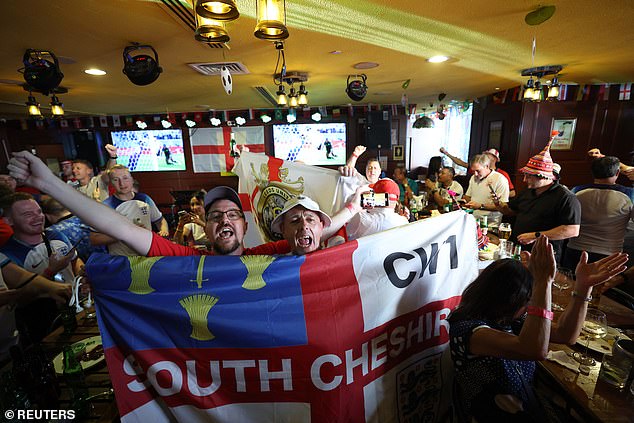 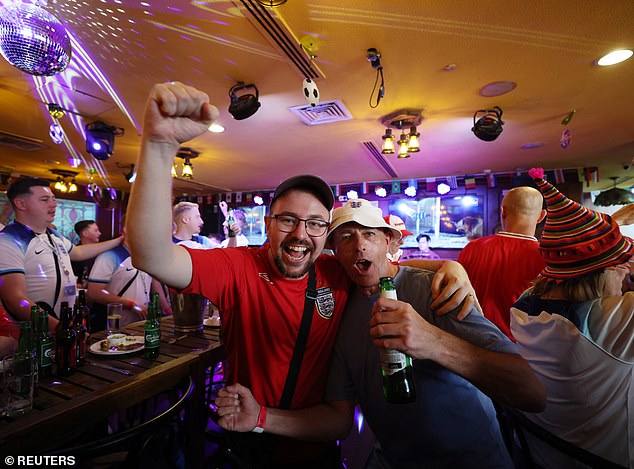 He said: ‘I would have been so miserable stuck at work. I’m a massive football fan, and I just couldn’t imagine not being able to watch them.

‘Morally I felt as though I couldn’t go [to Qatar]. I’ve always been against it but when I heard about the atrocities and the human rights record. I couldn’t give my money to them. I have also heard from mates over there they are paying £16 for a pint of beer so I’m glad I made that decision’.

Football-mad workers in the UK have been throwing ‘sickies’ at record rates so they can watch World Cup matches, employers are claiming.

Businesses have been flocking to legal advisers amid concerns staff are taking rogue days off, with today unlikely to be any different give the magnitude of the two matches.

‘We don’t have an issue at all!’ Kym Marsh dismisses Strictly Curse threat

Romeo Beckham, 19, follows inDavid and Brooklyn’s footsteps as he gets third tattoo in...

Boris told of pensioner who rides bus all day to keep warm – and...

Padma Lakshmi and Drew Barrymore glam up for the NYC premiere of NatGeo documentary...