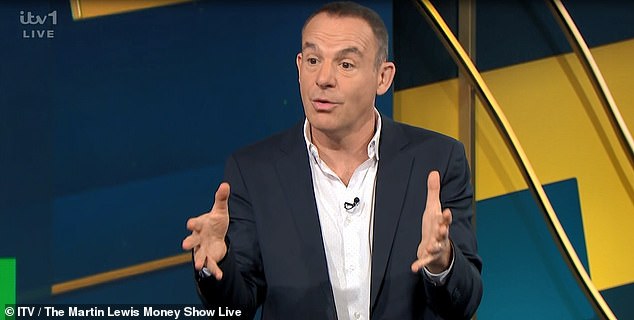 Martin Lewis has revealed his top rules for clearing your debt through a balance transfers.

The UK money saving expert also gave his advice when applying for a new card and how you can best manage them.

Speaking on ITV‘s The Martin Lewis Money Show Live last night, he explained that a balance transfer is about ‘cutting the cost of credit or store cards’.

Simply put, it’s a ‘new card that pays off your old card so you pay it instead’, the thrifty pro, 50, told the audience.

Martin Lewis has revealed his top rules for clearing your debt through a balance transfers – and urged anyone who needs to sort them do so sooner, as it’s ‘safer’

This means that the new card pays off the old card, and you now owe the new card – ‘but at a cheaper interest rate’.

‘I’m not saying you’ll get one, I’m saying you need to check for one because that is the prime weapon in cutting your cost.’

The expert has two rules for how to go about this.

First, he said, don’t just apply for one, as ‘it puts a mark on your credit file’. 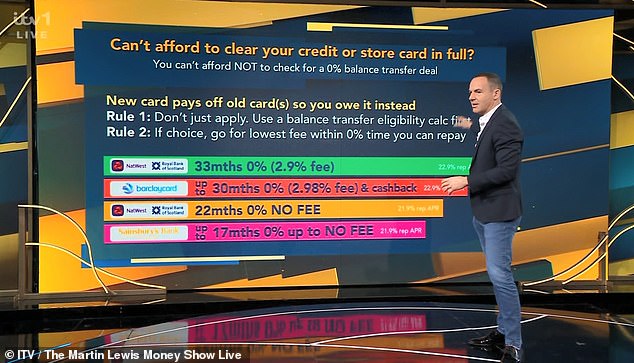 Speaking on ITV’s The Martin Lewis Money Show Live last night, he explained that a balance transfer is about ‘cutting the cost of credit or store cards’

‘Each extra mark on your credit file can hit your credit worthiness especially in a short space of time,’ he explained.

Instead, Martin advises using a transfer eligibility calculator. Plenty of providers have one, and there is even one on the presenter’s own site.

The broadcaster also revealed that while people may be anxious about applying if their chances are low, it’s still worth doing.

‘If you only get one card with a 10 per cent chance, if your priority is cutting the cost of that card, make the application,’ he said. ‘It may fail…so what, at least you tried and you might be the one in ten who gets it.’ 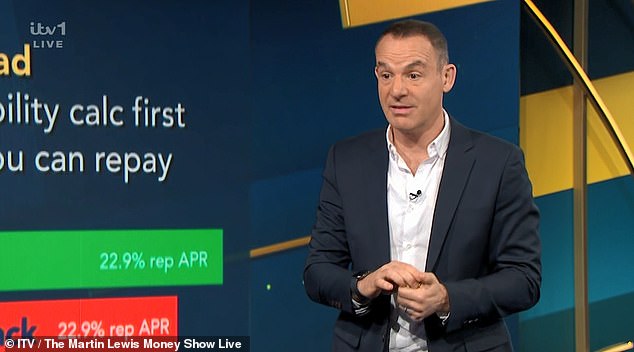 His second rule was – if you’ve got a choice of cards –  ‘you want the one with the lowest fee in the time that you need to repay’.

Martin also stressed the importance of never missing your minimum monthly repayment – which risks you losing the 0%. He recommended setting up a direct debit for this.

‘If you can’t do that you’ll need to balance transfer it again,’ he warned.

Finally, Martin cautioned away from spending or withdrawing cash on the card, as it usually isn’t at the cheap rate.

It comes as Martin recently said he is asked the same ‘heart-breaking question’ every year ‘without fail’ as many make a tragic mistake when booking a holiday.

In a newsletter, the British money expert spoke out about a common travel insurance mistake people make when booking trips abroad with holidaymakers.

Martin said that it makes his ‘heart sink’ when hearing of someone unable to get a holiday refund despite having to cancel due to illness.

With this in mind, he stressed the importance of not leaving travel insurance arrangements until last minute. He advises doing it ‘ASAB’ – As Soon As you Book.

Emeli Sandé is all smiles as she captures attention in pink trousers at BBC...

Inside the gov lab that inspired Stranger Things where sinister experiments were conducted on...

Rioters set blazes and pelt cars with bricks in Brussels after Belgium lose to...

Inside the seedy motel where Nick Cave’s son died