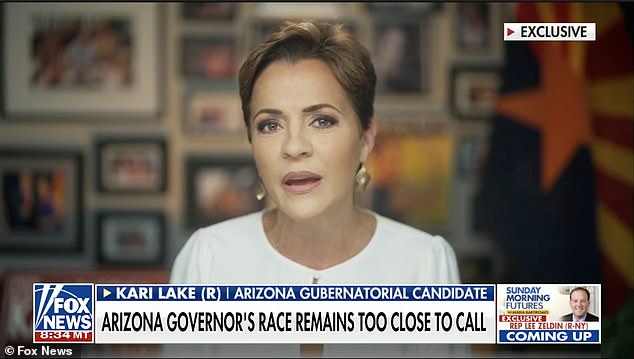 Republican Arizona gubernatorial candidate Kari Lake slammed her Democratic opponent on Sunday for refusing to recuse herself from the ballot counting process.

Speaking to FOX News host Maria Bartiromo, Lake described how her opponent Katie Hobbs, the current secretary of state, is ‘partially responsible’ for the election in which she is running.

‘She would be the one that would certify the election,’ Lake said. ‘She has a lot to do with registration, voter registration, all kinds of things … voter rolls and advising counties on how many ballots they’ll need.’

Lake said she had asked Hobbs to recuse herself from the Board of Elections in July 2021, right after she announced she was running, ‘recognizing that there’s a major ethical problem there.’

‘Obviously just the ethics of that look bad,’ she said. ‘And she didn’t do that.

‘Even though many people [have] been calling for her to recuse herself. It creates problems to say the very least.’

Still, Lake has insisted she will ‘100 percent’ be Arizona’s next governor, as more than 300,000 ballots have yet to be counted. 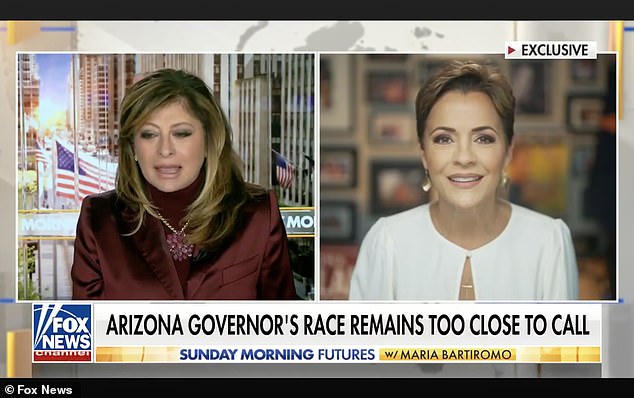 Speaking to FOX New host Maria Bartiromo on Sunday, Lake described how her opponent, Katie Hobbs, the current secretary of state, is ‘partially responsible’ for the election in which she is running 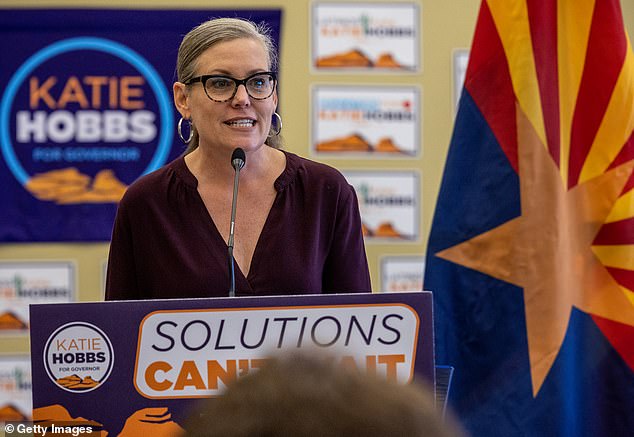 Hobbs currently has a 34,000 vote lead over Lake in the Arizona governor race

Many of the outstanding ballots, Lake said, are in Maricopa County ‘and they are heavy, very heavy Republican areas.

‘So we’re waiting for the vote to be counted,’ she said, telling Bartiromo that a final count is ‘wishy-washy’ as election officials told her they may have an answer anywhere from Monday to later in the week.

But as of Sunday, Hobbs had a lead over Lake, a former television news anchor, by more than 34,000 votes with more than 80 percent of the vote counted.

Lake would now need 56 percent of the remaining votes to win, according to election experts.

‘But she needs the remaining round of ballots to be incredibly Republican-leaning from here on out,’ he said. ‘She can’t afford to have another round of returns on this level, otherwise it will make it incredibly difficult to come back.’ 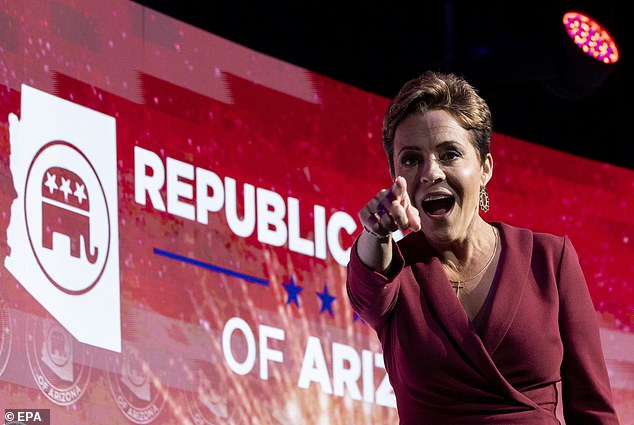 Lake has insisted she is going to be the next governor of Arizona, and has lashed out at the Board of Elections for dragging their feet in counting the ballots

Lake has previously pointed fingers at Arizona’s election officials for slow-rolling results to delay her win, emulating the rhetoric of former President Donald Trump, who she said she’d like to see run again.

But Maricopa County election officials hit back at her claim in a news conference Thursday night.

‘Quite frankly, it is offensive for Kari Lake to say these people behind me are slow-rolling this when they’re working 14 – 18 hours [a day],’ said Maricopa County Board of Supervisors Chairman Bill Gates.

‘If [Lake’s] team would have been paying attention before this election, they would have heard us talk about this over and over again — that we were not going to have results on election night or even the next day, that it was going to take several days.

‘Everybody needs to calm down a little bit, turn the rhetoric down,’ he added.

Power-hungry Brooklyn mobster, 44, is found guilty of orchestrating killing of his mob boss...

Day on the Green: Revellers stuck in knee-high mud after Geelong festival lashed with...