Not since Hollywood star Demi Moore posed naked for Vanity Fair back in 1991 has a pregnant belly come under as much scrutiny as Rihanna’s.

At the end of January, the singer announced she was expecting her first child by taking to the streets of New York in a long pink jacket unbuttoned to reveal her burgeoning bump, which had been decorated with a number of bejewelled body chains.

Since then, in a manner that’s had some clutching their pearls, the 34-year-old has made no effort to conceal her growing pregnancy, culminating with a cover shoot for Vogue’s May issue in a revealing orange lace Alaia bodysuit, with an inside shot of her reclining in a fur coat, her diamond-bedecked bump defiantly on show.

And frankly, I applaud it.

Four weeks ago, aged 44, I gave birth to my first child. For all that I’m delighted my son has arrived safe and well, I’m also rather missing my bump.

Because, while I know not every woman feels this way, I can honestly say I loved my pregnant body and took great pleasure in dressing to highlight, rather than conceal, my growing belly.

You probably wouldn’t have got me in an orange lace bodysuit, or with my bump bared for all to see, but for the first time since I was about 18 years old, I had the confidence to wear skintight Lycra.

Maybe it was because being pregnant freed me from my usual expectations about what my body should look like.

Blame society, or indoctrination, or anything else you like, but even though pre-pregnancy I was always a slim size 10-12, my stomach was never what you’d call flat.

As a result, I never felt able to wear anything that hugged my figure around the waist. 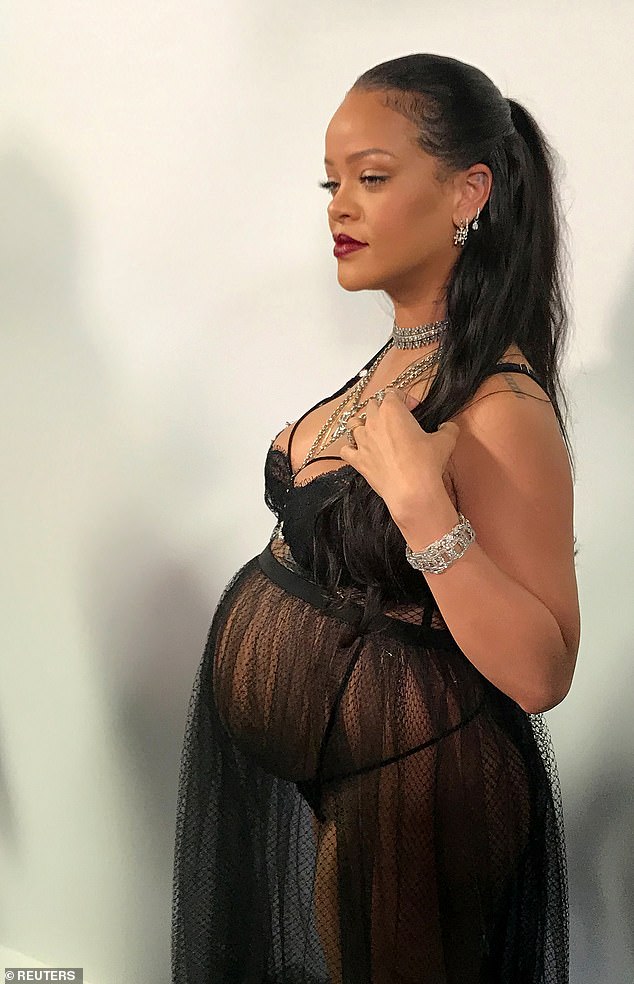 But once it became apparent that I was actually pregnant — and hadn’t just had a large bowl of pasta for lunch — I wanted to wear clothes that would show this off.

In her interview with Vogue, Rihanna says: ‘When I found out I was pregnant, I thought to myself: “There’s no way I’m going to go shopping in a maternity aisle.”

‘I’m sorry — it’s too much fun to get dressed up. I’m not going to let that part disappear because my body is changing.’

I felt the same. Once I’d got to the stage where I couldn’t do up my usual jeans, and I had to wear long vests under my tops to stop them riding up, I had to think about what my pregnancy wardrobe was going to look like. 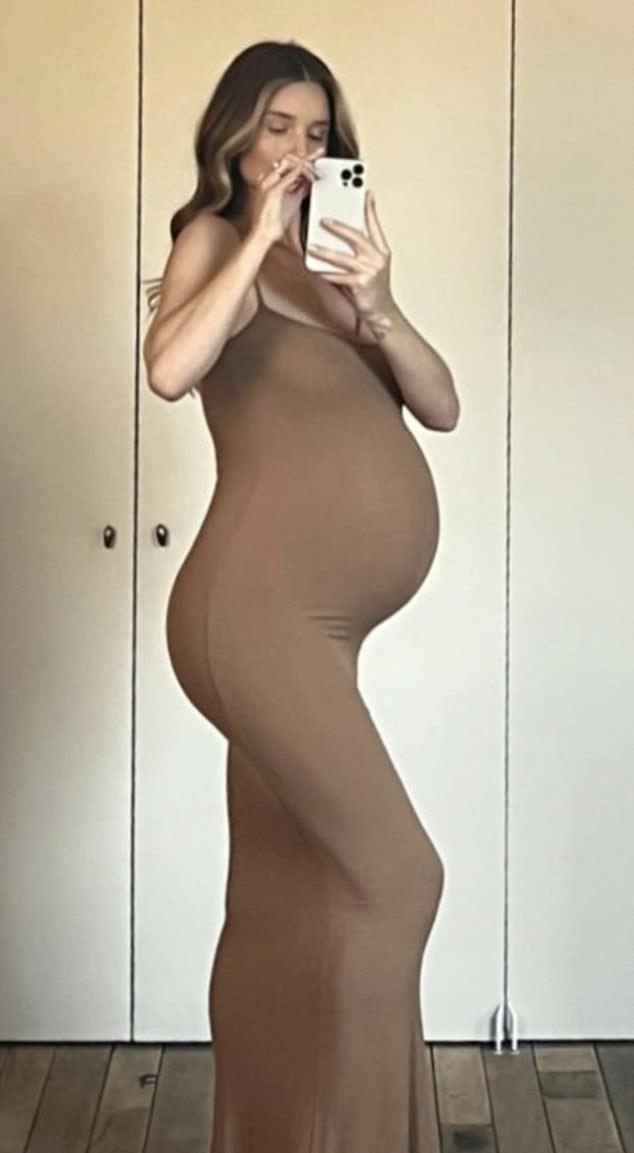 Unlike Rihanna, I wasn’t averse to ‘shopping in the maternity aisle’, but I was very clear that 1980s-style tent dresses that ostensibly aim to disguise a bump, but actually fail spectacularly and make every woman look like a galleon in full sail, were not for me.

Instead, I relied heavily on slinky, form-fitting dresses from Isabella Oliver — the maternity wear brand owned by the same company that owns Baukjen, a label I’d previously worn — alongside pregnancy jeans donated by friends, and Asos and H&M bargains I picked up on eBay.

Doing so meant that though my body was changing by the day, my sense of self remained in place. 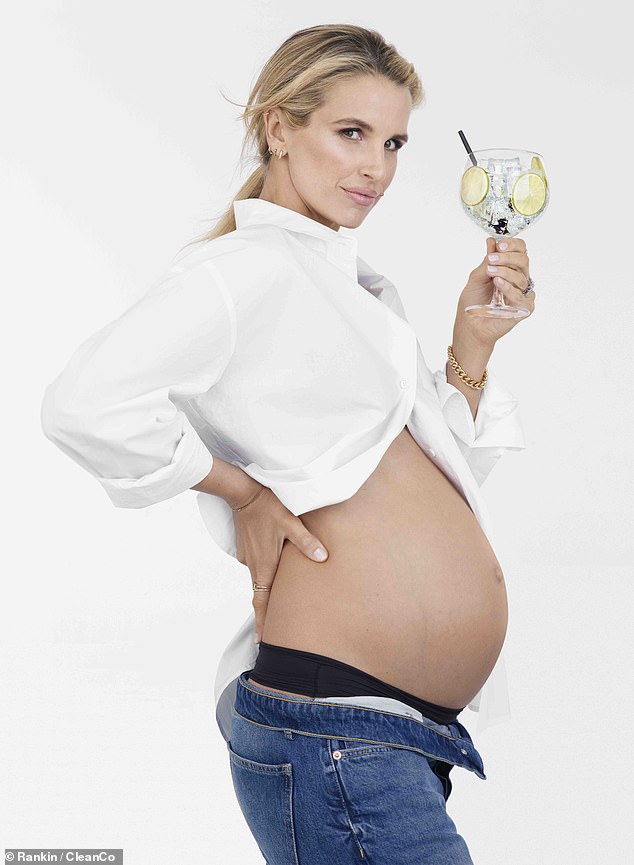 Strange as it may sound, by showing off my bump, rather than disguising it, I felt that it defined me less.

Until the furore around Rihanna’s bump-baring style choices, it hadn’t even occurred to me that dressing in a way that doesn’t seek to hide a pregnant belly might be considered shocking. It’s 2022, after all.

The thought that wearing clothes that show you are pregnant is in any way transgressive seems as old-fashioned as thinking pregnant women should go into confinement and re-emerge as mothers after their baby has been born.

This way of thinking utterly fails to see women as multi-faceted people, who can be expectant mothers at the same time as being sexual beings, who still want to be attractive and fashionable.

Admittedly, I had a relatively easy pregnancy and a compact bump. Maybe I wouldn’t have felt as comfortable in my bodycon dresses if, as some friends have described their pregnant selves, I’d been ‘pregnant from chin to ankles’ and spent months feeling nauseous from morning until night.

The fact my pregnant body gave me the opportunity to wear the figure-hugging outfits I didn’t have the confidence to wear pre-pregnancy was an added bonus. 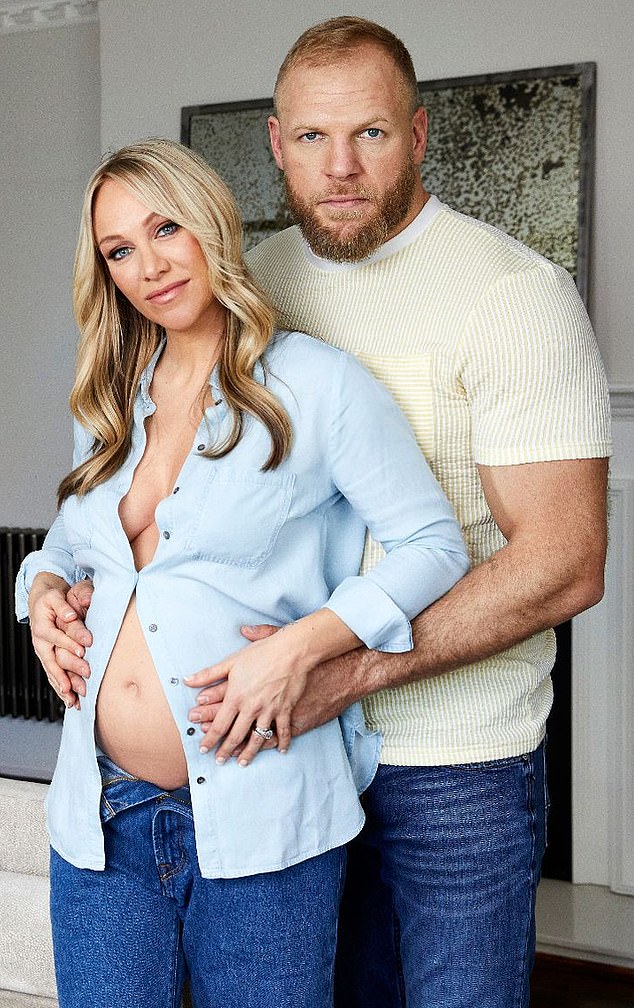 There is one downside to ‘flaunting your curves’ in this way, however. I think people who are more accustomed to seeing pregnancy bumps concealed than revealed don’t have any understanding of what they really look like.

As such, when I was still several months away from giving birth I had multiple strangers tell me that I ‘looked ready to pop’ or asking ‘Is it twins?’

However, that was a small price to pay for wearing what I wanted —clothes that felt like mine. As a woman, when you become pregnant — and even more so once you are a mother — it’s difficult to retain your independent identity.

Hanging onto your sense of style, whether that’s a tight dress or a string of diamante belly chains, is a small step towards doing that.

In the streets of Blackburn where my family lives, Asian women are hugely influential. There are tens of thousands of us in this city. And yet, at the level of local politics, we are almost completely unrepresented. There are just two Asian women councillors in my district.

That shocks me. I want to do something about it.

And that’s why I am standing in next month’s local elections, in Blackburn’s Bastwell and Daisyfield ward, which is currently held by three Labour councillors.

If elected, I believe I will be the first Conservative politician ever to wear a niqab: the full veil that I have worn since before I was a teenager, growing up in India.

This has provoked headlines: but to me, the clothes I wear are far less important than the fact that I am a woman, running for election to a council where women are the minority. 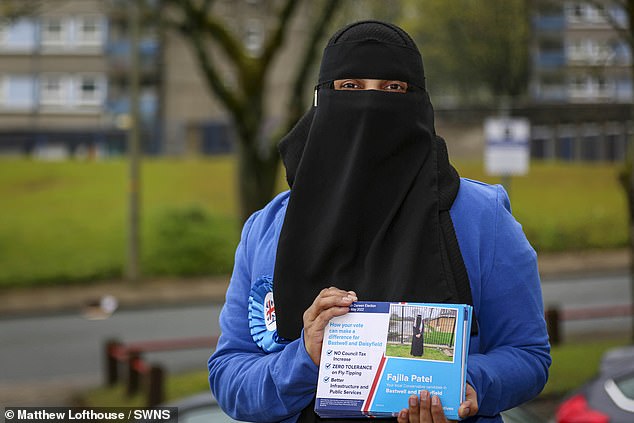 In the streets of Blackburn where my family lives, Asian women are hugely influential. There are tens of thousands of us in this city

That said, I do want to challenge the many misconceptions that people have about women who wear the full face-veil — and change attitudes for the better.

When my husband Altaf, a taxi driver known to everyone as Tiger, decided to stand for the council in 2019, I threw my energy behind him. With our four children — aged 16, 14, 13 and four — I’ve helped him all I can.

Tiger initially ran as an independent. Thanks to a series of viral internet videos, he came within a whisker of winning in this Lab- our stronghold.

Then, last year, the local Tories offered him the chance to stand as a councillor, and he won.

The Conservatives gave my family a chance: they’re the true party of opportunity.

The local Tory chairman, Julian Arnold, has hailed my selection as a ‘breakthrough’. And although there have been allegations of Islamophobia among some local Tories, that has not been my experience at all.

Labour, I’ve learnt, think they can rely on the South Asian vote here. They’ve got complacent and they don’t do enough for local people.

Tiger’s videos have made him something of a celebrity. People call out to us in the street when we’re shopping, and sing the music from his videos: Eye Of The Tiger is one.

I’m proud of him, of course, and happy that he is such a success as a councillor. The community is lucky to have him.

But I’ve come to understand that women like me are seriously under-represented on the local council — and that’s what I’m determined to fix.

I want to tackle the same problems that trouble people all across the country: ensuring good street lighting, maintaining the roads and pavements and looking after local parks.

Fly-tipping is a constant health hazard, and public services have been run down even as council tax is increased.

Women, particularly, will be able to talk to me, where they might feel inhibited raising concerns with a man. I will listen — and I can be their voice.

I could not do any of this unless I was able to wear a full niqab in the council chamber. This has been my custom, both growing up in Gujarat, north-west India, and after coming to Britain in 2005.

It will be hard work, I have no doubt. But by working as a team, I am convinced my husband and I can make it work.

That said, I won’t be making any viral videos. I want to be a Tory councillor, not a celebrity — and most importantly, to be true to myself when I represent the community I’ll be proud to serve.

PICTURED: Girl, 5, who screamed ‘but I’ve been good’ as her mom strangled her

Boris Johnson warned about Sinn Fein’s threat to the union