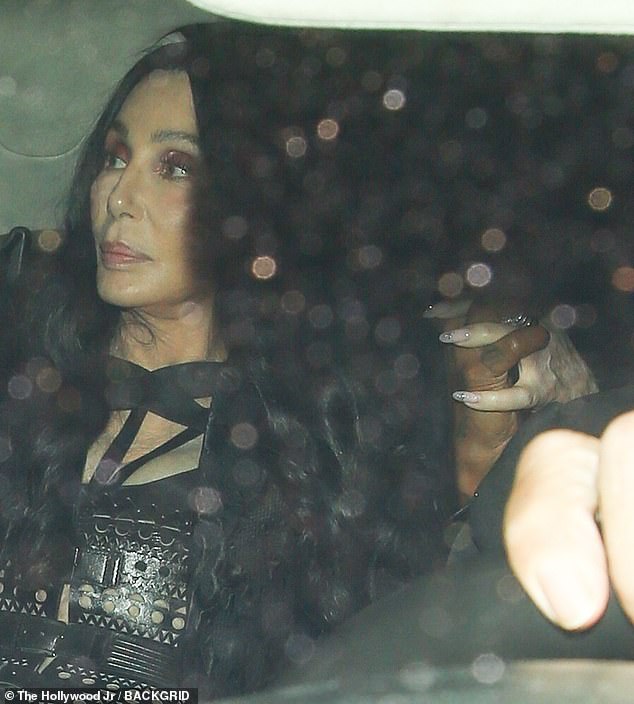 Cher and her rumored boyfriend, Alexander Edwards, further sparked romance rumors as they were spotted hand-in-hand while arriving at the singer’s Malibu mansion after enjoying a late night dinner in West Hollywood.

The Believe singer, 78, and music producer, 36, were pictured sitting closely in the back of a sleek, black Cadillac as they drove through the private entrance.

The two stars earlier stopped by celebrity hotspot Craig’s in West Hollywood, and they were also accompanied by Alexander pal, the rapper Tyga, during the weeknight outing. 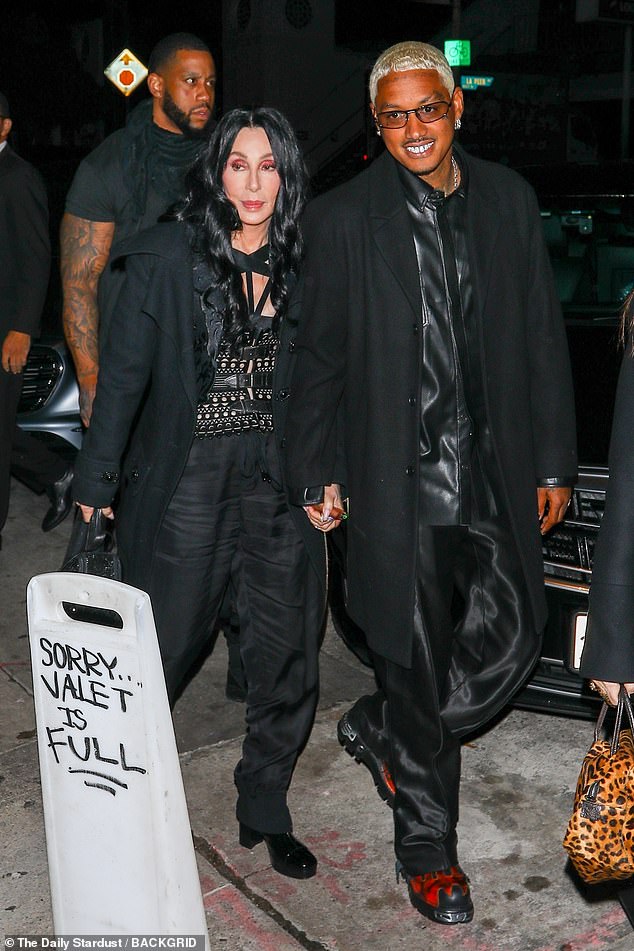 Turn back time! Cher, 78, and rumored boyfriend – Amber Rose’s ex – Alexander Edwards, 36, headed for dinner at Craig’s in West Hollywood before going to her Malibu home on Thursday

Both Cher and Alexander could be seen entangling their fingers together as they held hands while arriving at the star’s Malibu home. The entertainer recently put her mansion up for sale for a whopping $85 million earlier in October.

The two appeared to be calm and enjoying quality time together as the vehicle made its way through the gated entrance amid the late night hour.

Earlier in the evening, the Moonstruck actress immediately sparked romance rumors as she held hands with Alexander as they grabbed a bite to eat at the famous West Hollywood restaurant.

The performer and Amber Rose’s ex both donned fashionable all-black ensembles for their outing in the city. 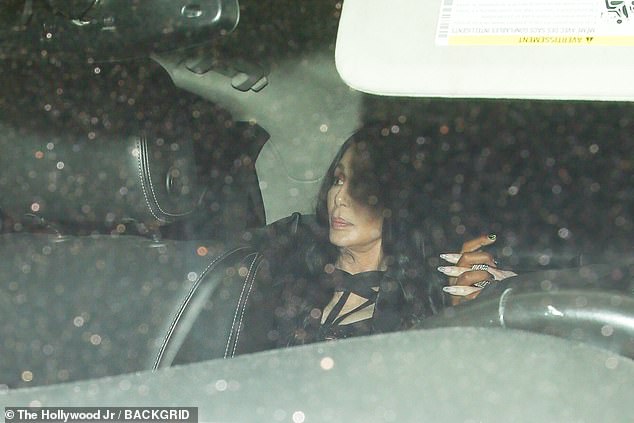 Holding hands: The two stars were seen hand-in-hand as they comfortably sat in the back of a black Cadillac that took them to the singer’s Malibu mansion during the late night hour 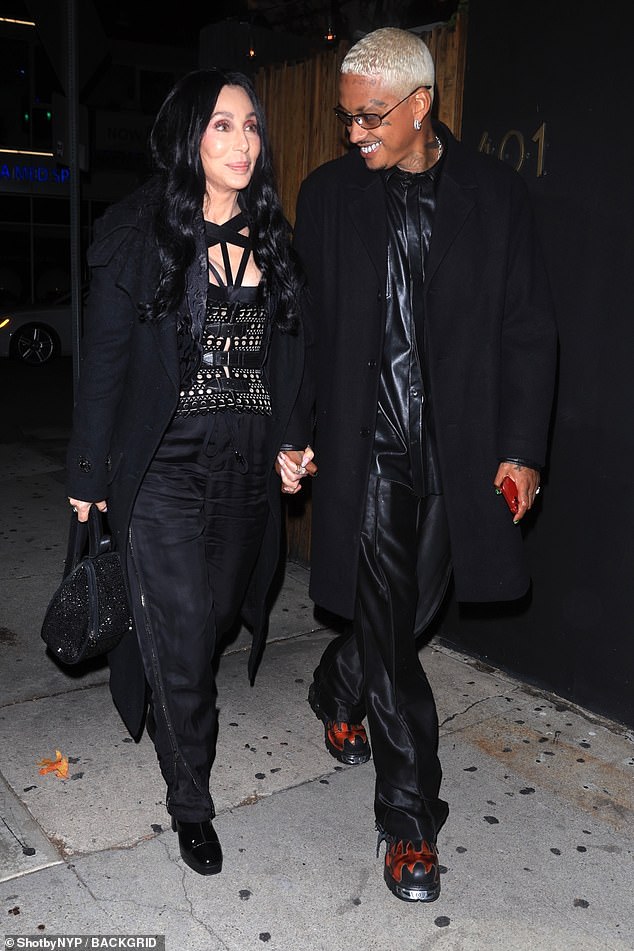 Smitten: The pair seemed very cozy as they held hands and flashed warm smiles at each other during their evening out 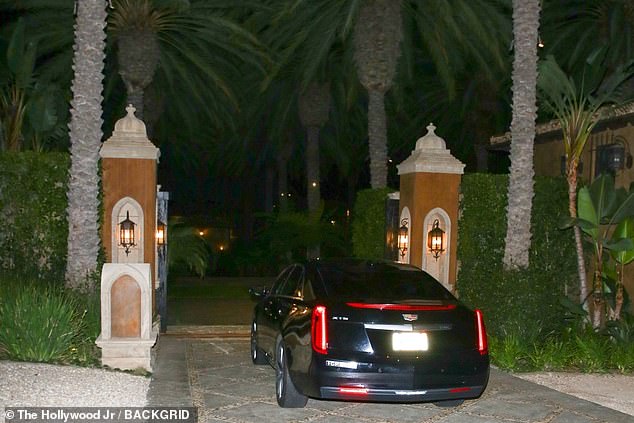 Continuing to spend time together: After their dinner outing with Tyga, the rumored couple were then taken to the Moonstruck actress’s home

Cher and Alexander were all smiles as they strolled through the crowded sidewalk full of passersby and paparazzi.

The Goddess of Pop donned a pair of loose-fitting black pants along with a corseted, belted top with cutouts for an edgy touch to her outfit.

Her long black locks were parted in the middle and fell down past her shoulders in elegant curls to complete her overall look.

Her rumored beau, Alexander, also opted for black pants and a faux leather top, which was covered by a black jacket. 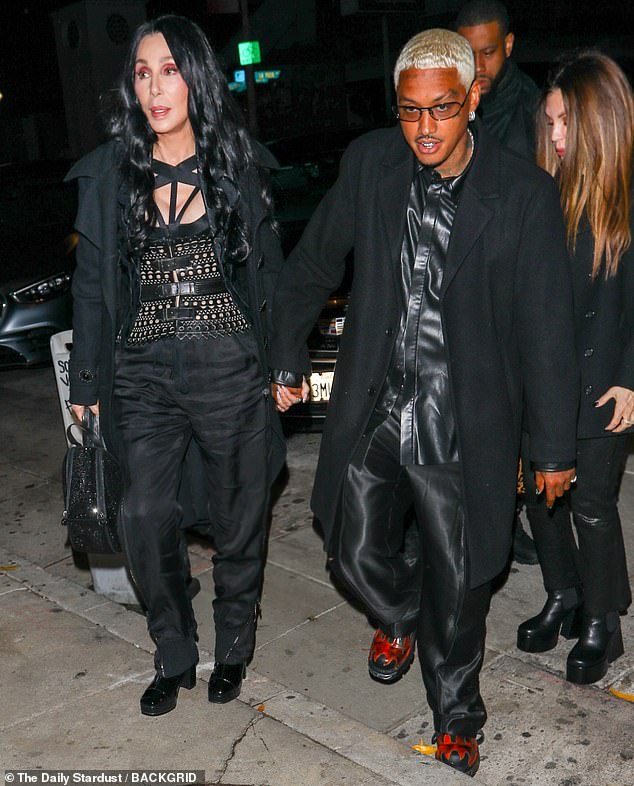 Moving on: The music executive previously was in a relationship with Amber Rose, but the two split one year ago after Alexander admitted to cheating 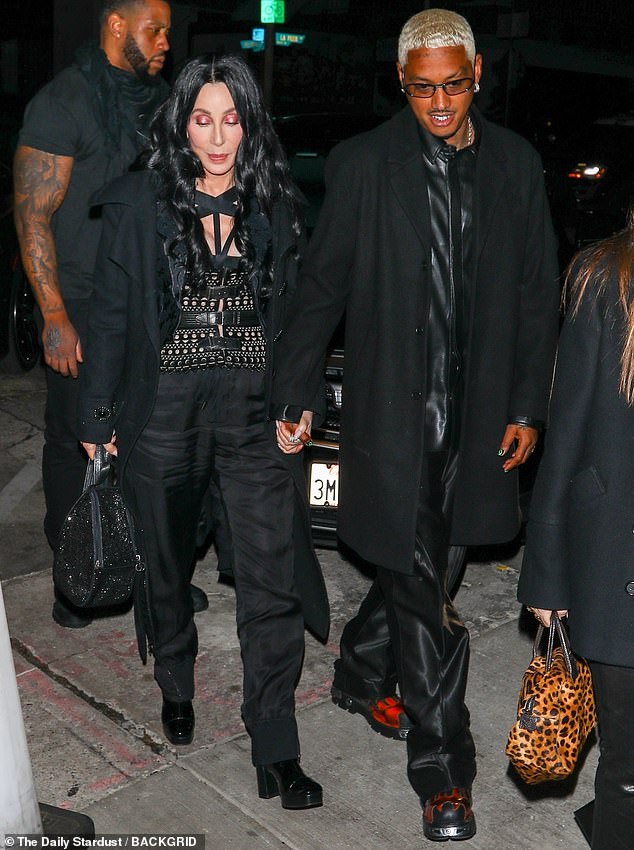 Cheating allegations: After Amber accused the music producer of cheating, he admitted to having an affair on the model with 12 women

The music executive notably was in a previous relationship with model and TV personality, Amber Rose. However, the two split one year earlier after she accused Alexander of cheating with 12 women, which he admitted to.

The two stars share their three-year-old son, Slash, who was welcomed to the world in 2019.

Cher last marriage was to musician Greg Allman from 1975 to 1979, and the two share their son Elijah Blue Allman. Her first marriage was with Sonny Bono from 1964 until their divorce in 1975. They also share a son, Chaz Bono.

As Cher and Alexander stopped for a bite to eat, Tyga was spotted following closely behind.

Earlier last week, the rapper and music producer paid a brief visit to the Burlesque star at her Malibu home, but the exact reason for the visit is unknown. 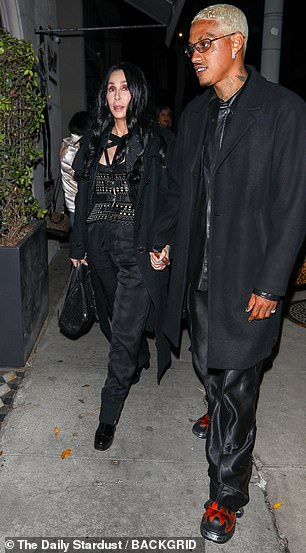 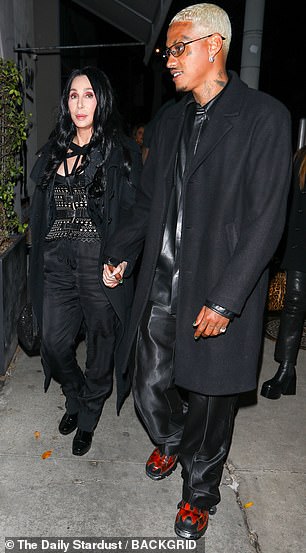 Having a blast: Cher and Alexander appeared to be in good spirits as they spent quality time together in West Hollywood 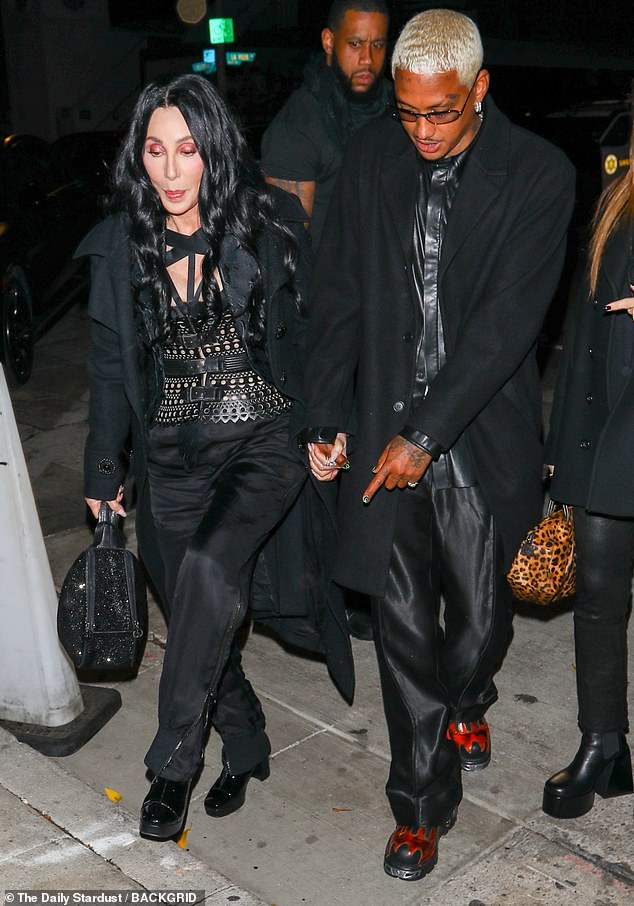 Caring: Alexander appeared to be pointing out the curb to Cher so she doesn’t trip as a swirl of people and cameras surrounded them

Tagging along: Tyga was also seen hanging out with Cher and Alexander at Craig’s during the weeknight outing. He wore black vinyl pants with a dark jacket and a gray Balenciaga T-shirt on

Later in the evening, Cher and Alexander jumped into the back of their awaiting vehicle together to head to their next destination.

Edwards, who is the VP of A&R at Def Jam Records, was pictured adorably laying a kiss on the music icon’s hand as the car began to drive off into the night.

According to Entertainment Tonight, eyewitnesses who had seen the rumored couple during their outing to Craig’s opened up about the two stars.

‘Cher and Alexander looked very flirty and were holding hands at the table,’ sources informed the entertainment publication.

Despite publicly showcasing affection Wednesday night, both Cher and Alexander have yet to comment on the romance rumors. 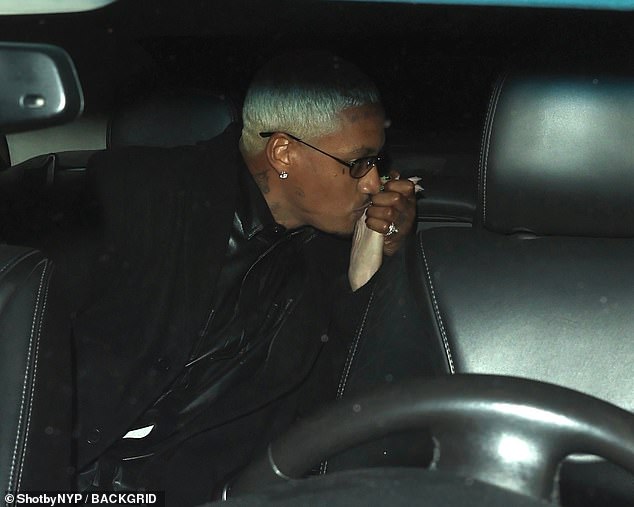 A kiss on the hand: Alexander was pictured laying a gentle kiss on Cher’s hand as they jumped back into their awaiting vehicle 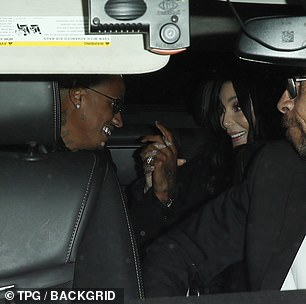 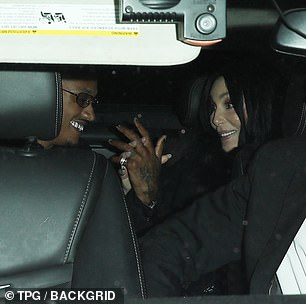 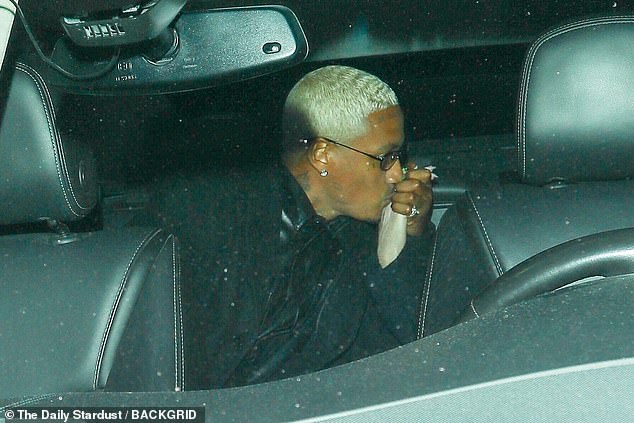 Unconfirmed: Despite sparking romance rumors Wednesday evening, Cher and Alexander have yet to comment on the status of their rumored relationship

Anna Richardson reveals she is ‘filled with dread’ by the future after her split...

EDEN CONFIDENTIAL: Nigella Lawson’s recipe for cooking up some confidence and conquering her fears

Jeremy Hunt faces fresh claims he is a ‘lockdown fanatic’