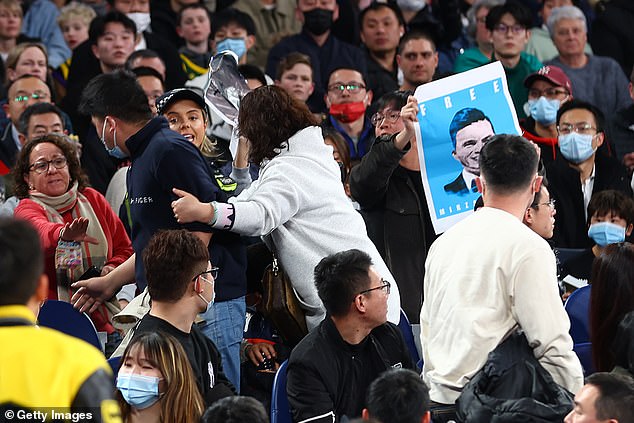 Crowds were left shocked at the chaotic display during the FIBA World Cup qualifier on Thursday night at John Cain Arena in Melbourne.

Footage shows him yelling and holding a poster before he is pushed by a larger man as his girlfriend tries to hold him back.

Another protester brandishes a Tibetan flag – used since the 1960s as a symbol of the Tibetan independence movement.

The flag in banned in mainland China because the communist superpower claims Tibet as its territory, therefore says the flag of the People’s Republic of China should represent it.

Security at John Cain Arena were forced intervene to break up the confrontation on Thursday night and then called in police to assist them.

Victoria Police played down the clash and said the group of protesters was small.

‘Police were pleased with the overall crowd behaviour, however, seven spectators were ejected for breaching the conditions of entry during the game,’ a spokesperson told Daily Mail Australia.

‘There was no physical violence or any injuries related to these incidents.’ 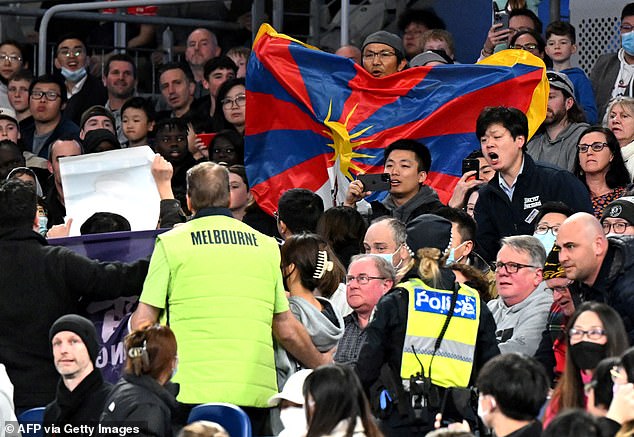 The Boomers won the game 76-69, narrowly holding off a charge by the Chinese team late in the third quarter.

A corner three-pointer from Jack White with 33 seconds left put Australia up by seven, clinching the win for the green and gold.

Australia is now 4-0 ahead in their World Cup qualification run and is safely into the next round, though will still want wins against Japan on Friday and China again on Sunday to make the draw as friendly as possible. 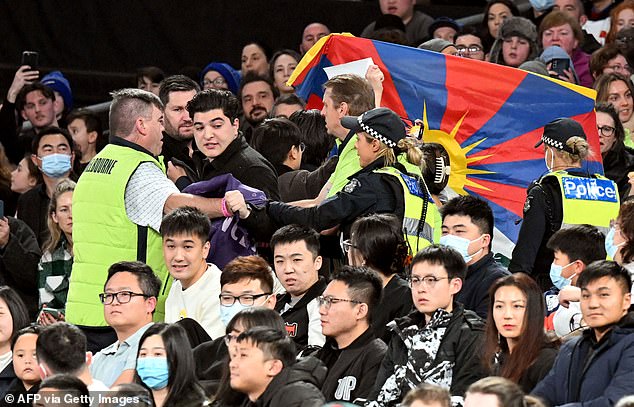 Texas governor slams Biden for the deaths of migrants whose bodies were found ‘stacked’...

One dead, one missing and 11, including 8 children, are hospitalized after Colorado boat...

Man, 55, sought as ‘person of interest’ in the murder of a NYPD civilian...

Tales of the drug mule who smuggled cocaine to the Rolling Stones when he...