The call that Boris Johnson has been dreading for months finally came on Sunday afternoon. As the Prime Minister prepared to attend the Jubilee Pageant on The Mall, the Downing Street switchboard told him Sir Graham Brady was on the line.

Sir Graham, head of the ‘men in suits’ of the Tories’ 1922 Committee, got straight to the point. For all the talk of a ‘Jubilee truce’, the number of letters from mutinous MPs calling for a vote of no-confidence in the PM had passed 54 – the level needed to trigger a formal vote.

What is more, several other MPs had sent post-dated letters that would become active as soon as the four-day Jubilee celebrations were over. A contest was inevitable. The only question was, how quickly did the PM want to act? Mr Johnson did not hesitate, telling Sir Graham: ‘Let’s get this over with and move on.’

After that, there was just time to summon a meeting of his inner circle for that evening, before heading off to the pageant, where he and his wife Carrie took their places behind the Duchess of Cambridge to watch the gloriously British display.

If he was concerned about the potentially career-ending vote he did not let it show. He could not afford to – not only were the world’s cameras in attendance, but Labour leader Sir Keir Starmer was seated just a few places along.

On the PM’s return to No 10, his allies gathered in his Downing Street flat to dust off a plan that has been in preparation since January, when the Partygate row was at its height. In the room were Mr Johnson’s chief of staff Steve Barclay, chief whip Chris Heaton-Harris, long-time ally Nigel Adams, communications chief Guto Harri and Ross Kempsell, political director of the Conservative Research Department. Also in attendance was polling guru Sir Lynton Crosby, who has no formal role in government, but whose advice the PM has trusted for years.

‘It was calm,’ one source said. ‘We’ve had a plan for a long time – it was just a matter of going over that, checking it, tweaking it and putting it in motion.

‘It was also pretty clear the other lot didn’t have a plan. They stumbled into this without any idea of what would come next.’

The meeting also discussed how the PM could stamp his authority on the party again after what looked certain to be a bruising, divisive experience.

Plans for a summer reshuffle could be fast-tracked to take place in the coming days. Mr Johnson was also advised to withdraw the whip from the ‘serially disloyal’. 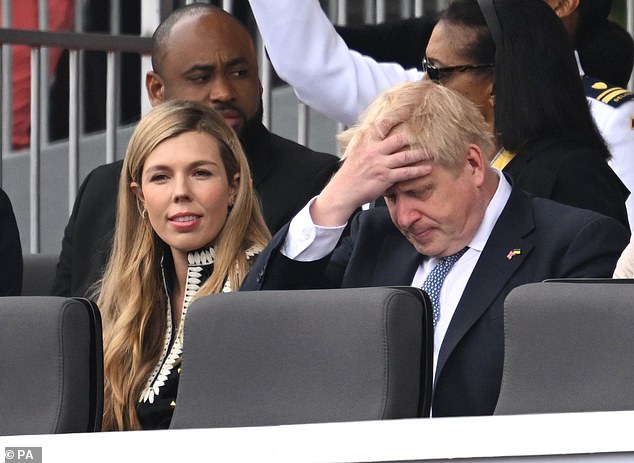 ‘The PM’s weakness is he’s too nice to people,’ one source said. ‘We need to start getting tough with some of these people and send a message that we’re not going to put up with it any more.’ The PM then worked on a personal letter to Tory MPs, which was sent to aides for approval at 10.30pm.

News of the impending contest was kept extremely tight – to the extent that even Health Secretary Sajid Javid was not told before he was sent out to defend the Government on a morning broadcast round. But the surprises were also still coming for No 10.

At 7.36am, the PM’s old friend Jesse Norman plunged the knife in, releasing a scathing letter saying the Government ‘lacks a sense of mission’. Mr Norman said neither the Tories nor the country could afford to ‘squander the next two years adrift and distracted by endless debate about you and your leadership’.

One insider acknowledged that Mr Norman, an Eton contemporary of Mr Johnson who backed him for the leadership, was ‘not on anyone’s list’ of likely rebels.

A couple of minutes after 8am, Sir Graham broke cover to tell the world that ‘the threshold has been reached’, triggering a formal vote of confidence later that evening. A few minutes later, a one-page summary of the case for the PM’s defence dropped into Tory MPs’ inboxes. At 9am, government whips were summoned to a meeting to war-game the day and identify the waverers who might respond positively to a call from Mr Johnson. 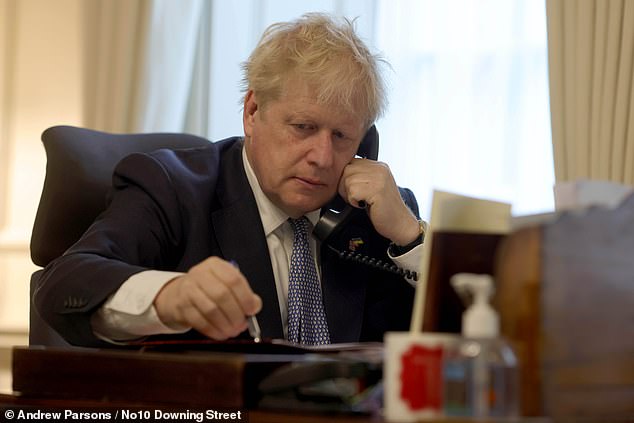 The PM also spent an hour personalising his letters to MPs, with a handwritten note on each one – a use of time that raised eyebrows among some supporters.

No 10’s confidence had previously been buoyed by the fact that there was no obvious challenger. As one old hand put it: ‘You can’t have a challenge without a challenger.’ That changed shortly before 11am when Jeremy Hunt took to social media to savage the PM. The former foreign secretary, who was defeated by Mr Johnson in the 2019 leadership contest, has been ‘on manoeuvres’ at Westminster for months.

He did not mince his words, saying: ‘Today’s decision is change or lose. I will be voting for change.’

Mr Hunt is widely seen as one of the leading agitators undermining the PM and the Government. The response from Mr Johnson’s allies was immediate and brutal.

Culture Secretary Nadine Dorries said: ‘Your pandemic preparation during six years as health secretary was found wanting and inadequate. Your duplicity right now in destabilising the party and country to serve your own personal ambition, more so.’ Her no-nonsense response underlined how difficult it could be to put the Tory Party together again after last night’s vote.

Education Secretary Nadhim Zahawi said he was ‘heartbroken’ to see senior colleagues tearing lumps out of each other.

A No 10 insider acknowledged that Mrs Dorries’ forthright response ‘wasn’t in the comms playbook’, but said she ‘speaks from the heart’. Privately, loyalists were delighted to see Mr Hunt flushed out, believing some of the PM’s Brexiteer critics might pause for thought at the prospect of a Hunt takeover.

The business of government also had to continue. The PM pressed ahead with a planned phone call with Ukrainian president Volodomyr Zelensky. He then hosted a meeting about Ukraine with Estonian PM Kaja Kallas.

In Portcullis House, the large office block in which coffee shops serve as Parliament’s public square, Tory whips stationed spies to report on who the plotters were meeting.

Yet there was some unease at the effectiveness of the No 10 operation. Some wavering MPs said they had not been called. 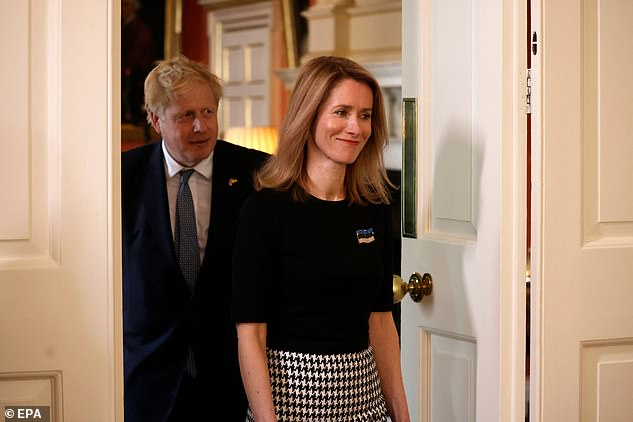 And while loyalist ministers such as Jacob Rees-Mogg were all over the airwaves making the case that a win by one vote is ‘enough’ for the PM to continue, Cabinet big-hitters Rishi Sunak, Liz Truss and Priti Patel confined their enthusiasm to tweets or brief statements. None of Mr Johnson’s predecessors as prime minister offered any words of support.

At 4pm, Mr Johnson came to make his own final appeal to MPs, setting out plans for the future ‘if I am still here’. Speaking at a packed meeting of the 1922 Committee, he pleaded with MPs to break free from the ‘media-driven focus’ on his leadership and concentrate on delivering for the public – and taking the fight to Labour.

‘This is not the moment for a leisurely and entirely unforced domestic political drama,’ he said. ‘This is the moment for us to lift our gaze from our navel.’ He highlighted his own track record of winning elections, dangled a hint of future tax cuts and gently pointed out that the rebels have ‘no alternative agenda’. To no one’s surprise he faced hostile questions on Party-gate from long-time malcontents Mark Harper and John Baron.

The PM continued to work the phones from his Commons office to try to twist a final few arms.

But eventually there was nothing more to do but wander up the corridor to cast his own vote. And wait for Sir Graham’s verdict.

The Queen’s magical home movies: Monarch is seen beaming alongside her sister and father