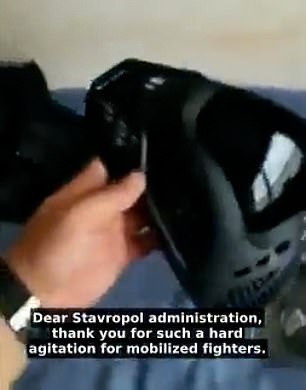 Putin‘s troops moaned that they have been issued with plastic paintball masks, children’s gloves and rubber boots to fight in Ukraine.

Footage taken in Stavropol region in southern Russia reveals a man complaining about the pitiful resources he has for fighting, showing his paintball mask.

The man said: ‘Thank you for these warm gifts for mobilised fighters.

‘They think we will be wandering around like Star Wars wearing this b*******t, with no aim and no goal.’ 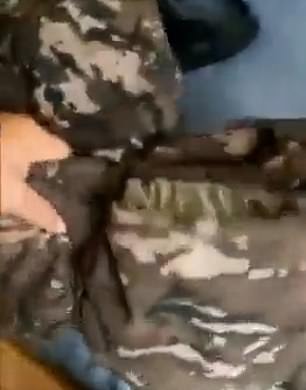 Still unimpressed, he reveals the hat and one litre thermos he has, which he also mocks.

Throwing the thermos down on the bed he says: ‘Very useful thing, it will help us.’

Another item which is not satisfactory for him is the child-sized gloves he has received.

He quips: ‘The best thing that is, these are tactical gloves for a child. Because they don’t fit my hand at all, and they didn’t fit any fighter.’ 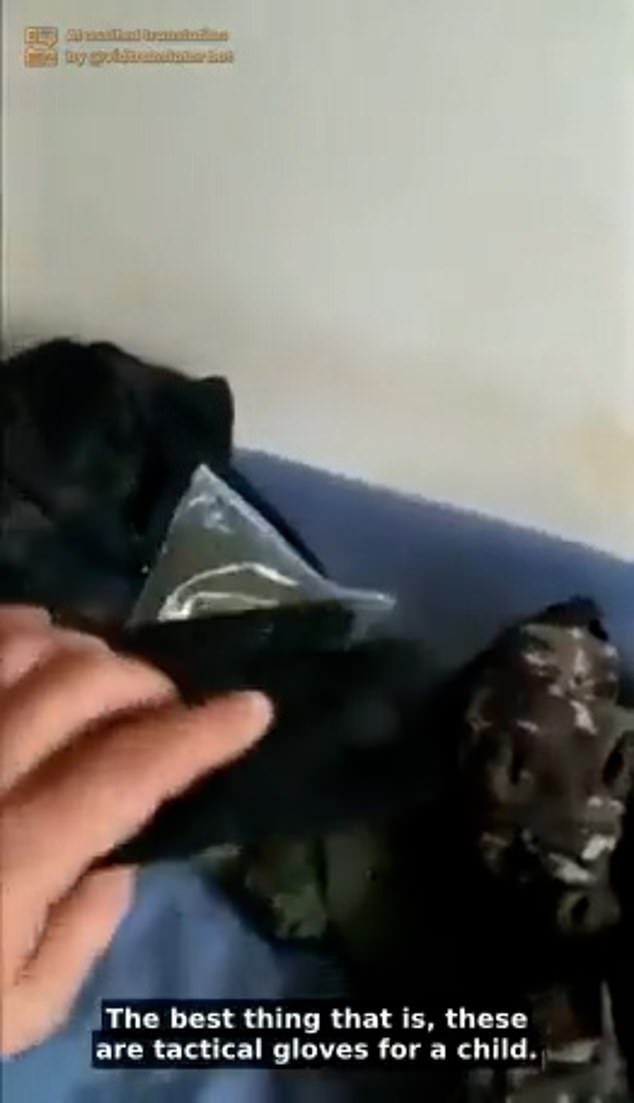 Another item which is not satisfactory for him is the child-sized gloves he has received, pictured

The video continues with him showing the camera some rubber boots which he is frustrated with as they are rubber and says he will throw them away.

And he bemoans the fact that he has not got access to a ‘warm’ winter uniform and shows the raincoat he is wearing to fight.

Footage concludes with one of the soldiers wearing some of the equipment as the men laugh and joke: ‘Elite star warrior’ and say ‘Ready?’ 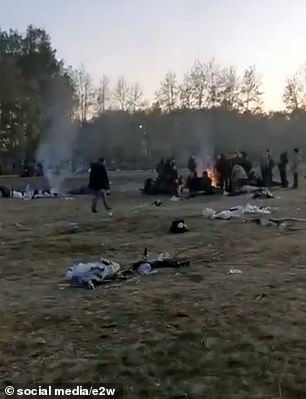 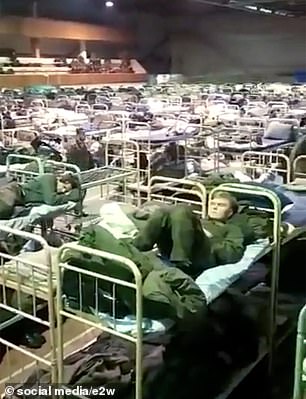 Scores of men have headed to the frontline in the last few weeks hugely under-equipped and under-prepared. Pictured: Men after conscription from Norilsk

The clips are more examples of the chaos that has ensued amid the scramble to mobilise Russian men after Putin’s conscription order on September 21.

Scores of men have headed to the frontline in the last few weeks hugely under-equipped and under-prepared.

It has led to some of the men already losing their lives and being returned to Russia to be buried by their families.

Angry men have said that often they were required to buy their own food and equipment and food. 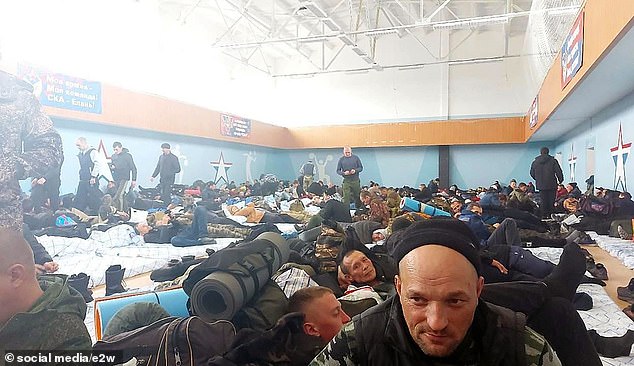 Pictured: Men from Norilsk who were conscripted sleep on the floor

And there is such a high demand for kit that prices have surged in Russia, according to the Kommersant newspaper.

Body armour in Russia has soared to around £1,115 with a rucksack costing up to £560 and thermal underwear skyrocketing to more than £300.

Putin’s call for conscription was a bid to bolster his Russian troops in his war against Ukraine as Zelensky’s troops fought on.

The extra 300,000 soldiers from Russia were called up to fight in the first scramble for conscription since 1941. 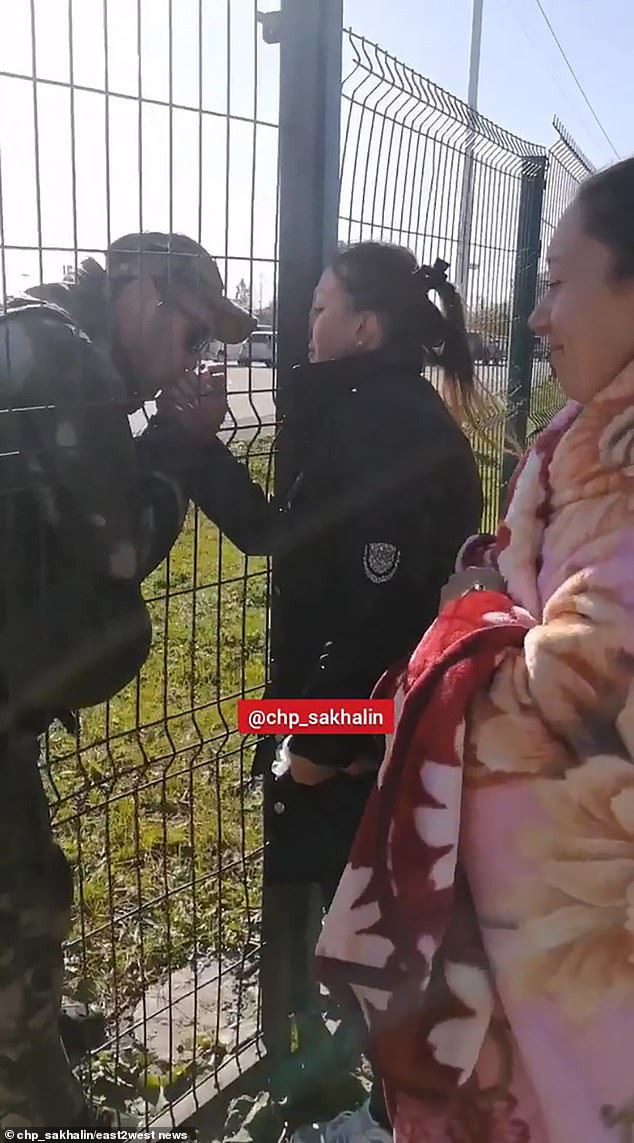 However, frustrated Russians have criticised Putin and his war in the wake of the announcement.

One woman expressed her fear about the conscription in footage from Kursk, Northern Russia.

She said: ‘The guys are being abandoned in the forest without ammunition, without food or water and are being fired at, wounded and killed.

‘Who are we to turn to? The president? The govenment? Help us. Return our children to us.’ 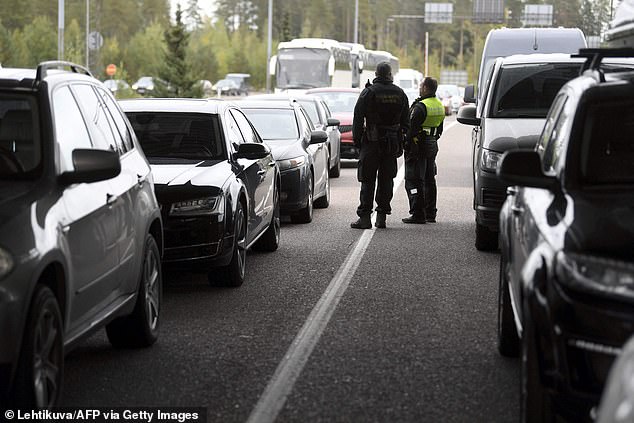 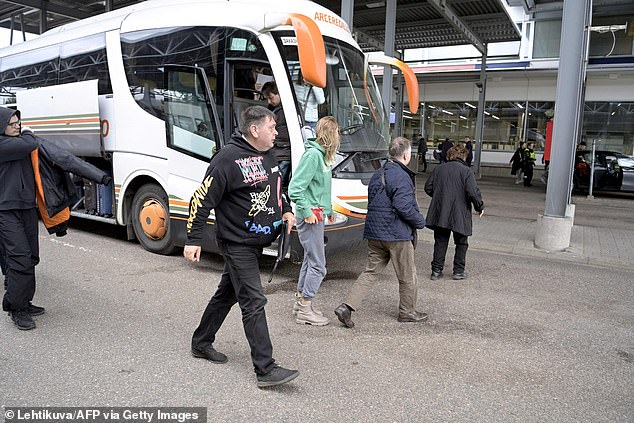 Passengers get off a Russian coach to have their documents checked at the Vaalimaa border check point in Virolahti, Finland, on September 25, pictured

It comes after some desperate men got friends and their wives to deliberately break their bones as they hoped to avoid conscription.

And photographs showed hundreds of people trying to flee the country over the last month.

Those remaining in Russia have often been plucked from the street to fight in Ukraine.

Police and enlistment officers have been spotted lurking on street corners and near blocks of flats.

Armed recruiters have even been visiting offices seeking men for mobilisation and in some cases enlistment teams are reportedly using facial recognition cameras to snare dodgers.

‘They are acting like dog catchers. It’s sickening how they are dragging men away as cannon fodder,’ said one commenter. 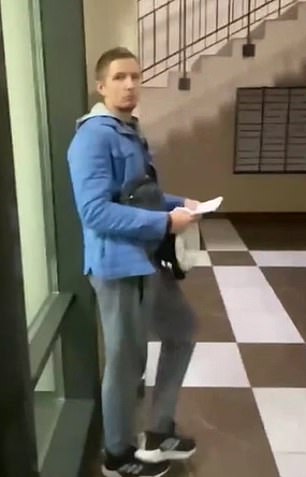 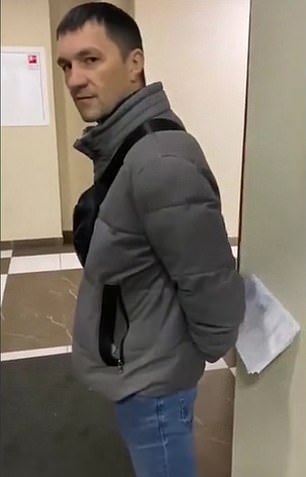 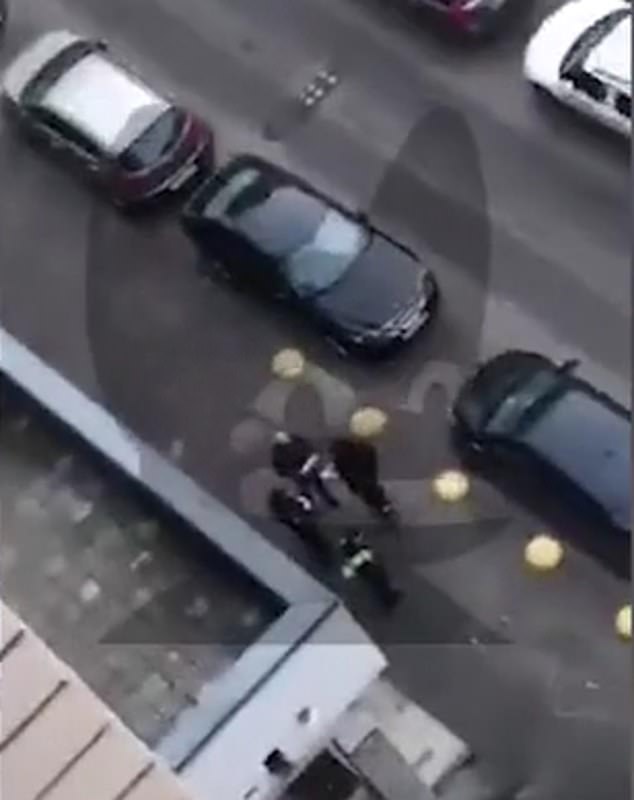 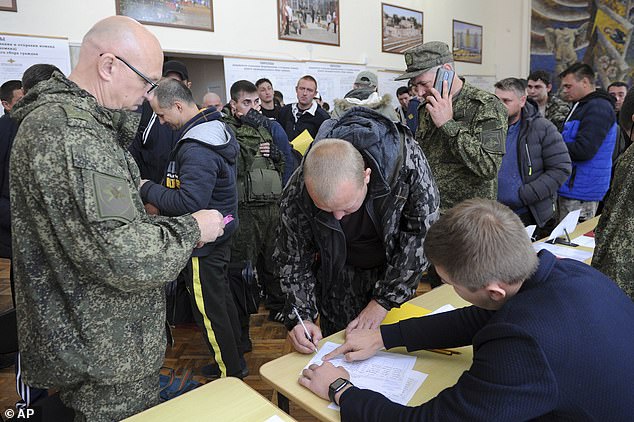 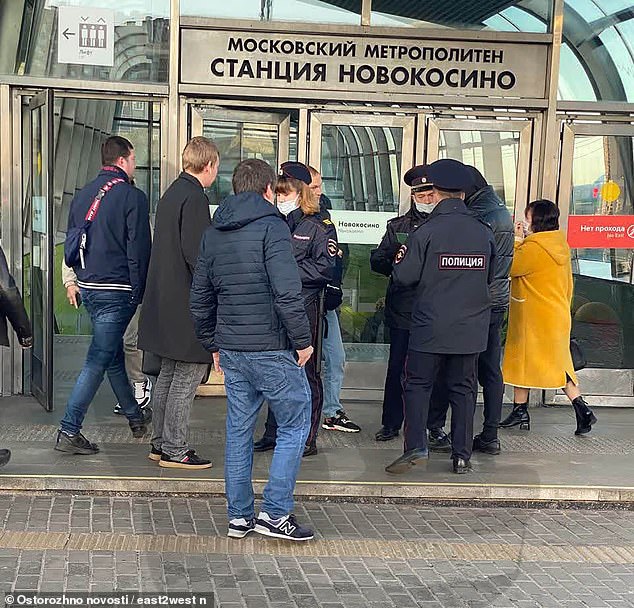 In Polyustrovo Park residential complex in St Petersburg, men of mobilisation age were trapped near the entrance for summonses to be served.

In Moscow, there was a mass delivery of summonses at underground stations, reported Ostorozhno News.

Witnesses said police officers interview men, take their personal details, then serve some of them with summonses. Some people are taken away to police cars.

‘There are cases of summonses being served on the street, citizens being detained by the police in the subway and hotels, and their forced delivery to military enlistment offices or mobilisation points’

He stated: ‘This practice is illegal.’

Senator Andrey Klishas – from the pro-Putin United Russia party – called for checks on whether it was legal to pluck men from the metro and force them to the war.

They are also raiding offices to root out men of mobilisation age, even though Russians were promised that one percent of the male population would be sent to Putin’s war.

‘Police officers walk around the floors and take men of military age,’ reported a source of The Village online media.

‘In the morning there was one paddy wagon, it was filled. A second was brought. They took our administrator and other men who were on the first floor. [Men] are caught in the corridor. 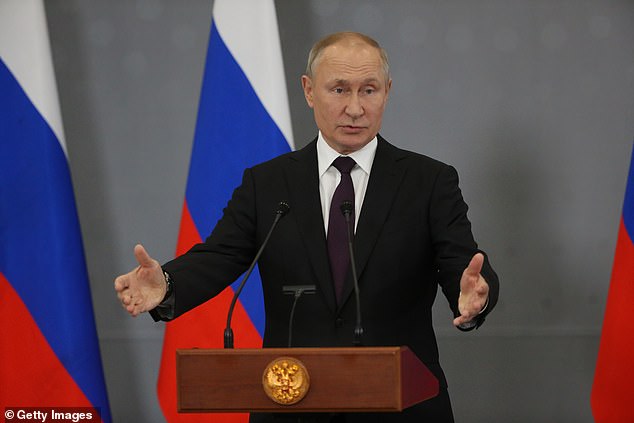 Putin said in Astana that the ‘partial mobilisation’ he announced last month, which the defence minister said aimed to recruit 300,000 soldiers, was finishing and would be over within two weeks 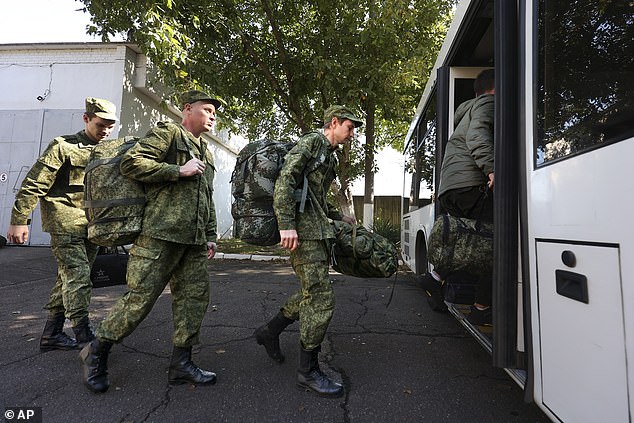 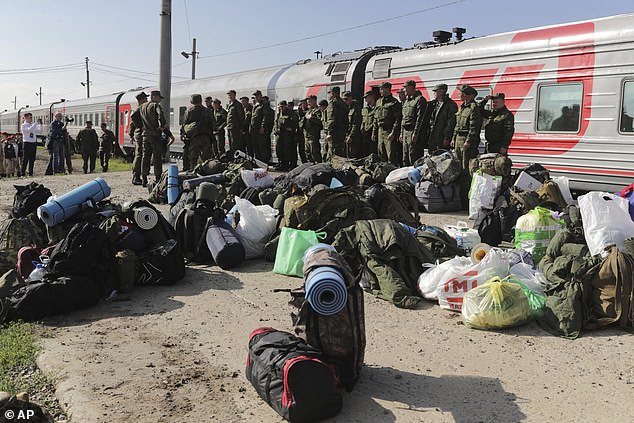 Russian recruits gather to take a train at a railway station in Prudboi, in the Volgograd region of Russia, September 29

The conscript-catching raids seem to give lie to claims in Russia that the first wave of mobilisation is over, and that no second wave has begun.

The sinister conscript catchers come as a holiday flight in Russia was delayed for nine hours because the co-pilot was conscripted.

The unnamed pilot was barred from going abroad even as passengers were on board and ready to fly to Antalya in Turkey.

Holidaymakers in the AzurAir flight were told: ‘Due to the mobilisation and subsequent prohibition on crossing the border for the co-pilot, take-off has been cancelled.

‘We ask you to leave the plane.’

The flight left oil city Ufa in the Urals some nine hours later once a replacement co-pilot was found.

‘Everyone was shocked,’ said passenger Vadim.

‘It was insane, the military enlistment office came for the co-pilot. We were supposed to take off at 5:20 am, but we eventually left only at 2pm.

‘At first we waited for two hours, then we were all sent to hotels.’

Officials evidently blamed the plane nightmare on the co-pilot ignoring an initial summons to fight in Putin’s bloody war in Ukraine.

This is why he was barred from leaving Russia, it was claimed.

Meanwhile, Russian president Vladimir Putin has increased the number of his strategic nuclear bombers stationed at an airbase near the Finnish and Norwegian borders, satellite images show.

The move comes amid high tension over whether Putin plans to launch an atomic attack in Europe and his on-going invasion of Ukraine, which has suffered a string of embarrassing setbacks in recent months.

The Russian tyrant has gradually increased the number of strategic bombers at Olenya air base – from none on August 12, to four supersonic Tu-160s on August 21, to 11 now. 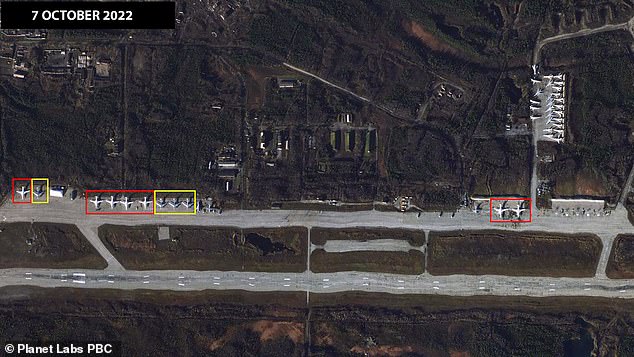 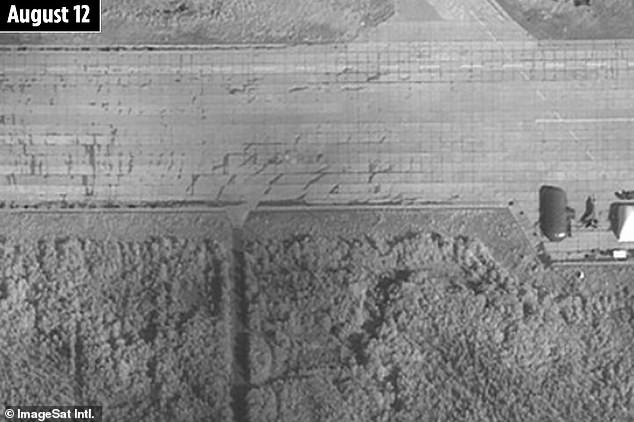 Pictured: The runway of the Olenya air base at the Kola Peninsula is seen empty on August 12, 2022 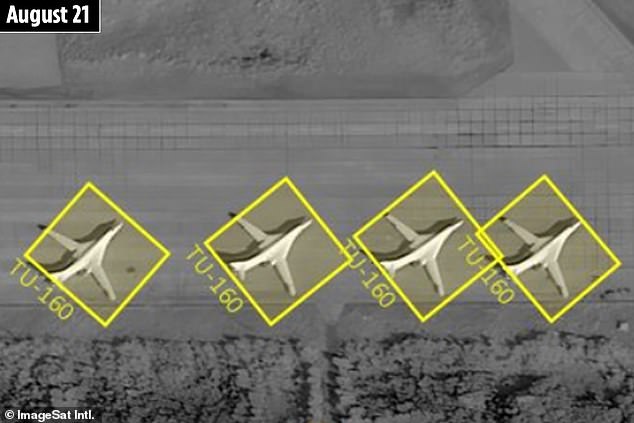 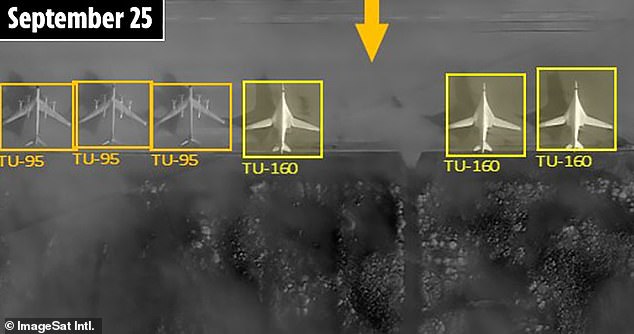 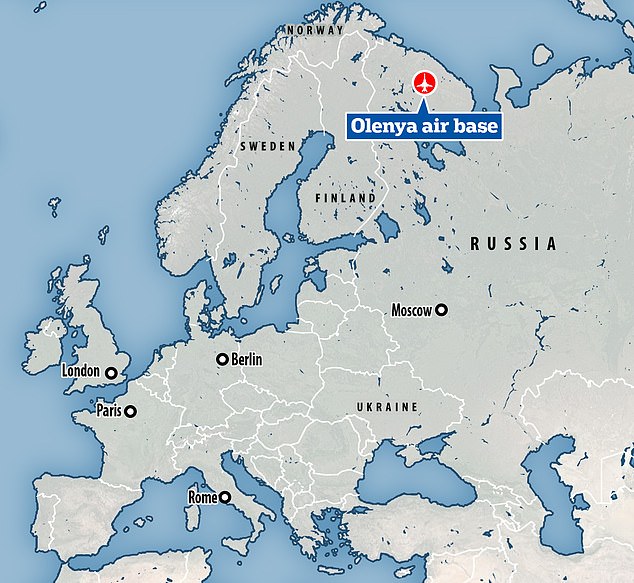 The Armageddon planes are usually stationed at Engels Air Base, 450 miles south-east of Moscow.

They can also be used with conventional weapons.

There is evidence the deployment at Olanya has Kh-101 cruise missiles for possible use against targets in Ukraine.

The Kh-101 can carry conventional or nuclear warheads.

The runway at Olenya airbase was empty on 12 August, with satellite images from October 7 showing that it is now full of warplanes.