Princess Beatrice revealed how she combines her official royal title with her married name for formal events when she stepped out at Ascot yesterday.

The royal, 33, who tied the knot with her husband in July 2020 in Windsor at the height of the pandemic, styled herself ‘HRH Princess Beatrice Mrs Edoardo Mapelli Mozzi‘ as she descended onto the racecourse in Berkshire.

It’s understood that’s guests in the Royal Enclosure at Royal Ascot can choose how they want to be referred to on their name badge.

Beatrice, who was joined by her Italian husband, 38, her uncle Prince Charles, 73, and her cousins Zara and Peter Phillips for the day, was also seen with a clutch bag reading ‘B.Y’ for ‘Beatrice York,’ from Misela, showing she enjoys a bit of branding on occasion. 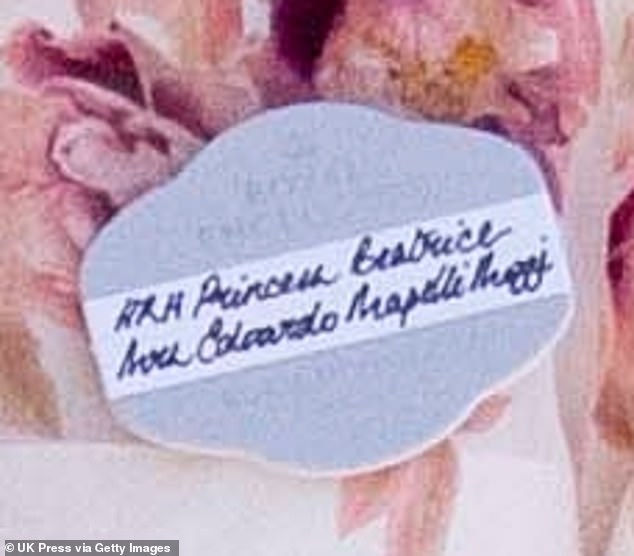 Pinned to her bust, her regulation Ascot nametag revealed she was styled ‘Princess Beatrice, Mrs Edoardo Mapelli Mozzi’ for the day at the races

The royal looked darling in a floral day dress and a raffia fascinator adorned with pink flowers.

The mother-of-one wore the dress once before to attend the Bahrain Grand Prix with her sister Princess Eugenie in March.

Pinned to her bust, her regulation Ascot nametag revealed she was styled ‘Princess Beatrice, Mrs Edoardo Mapelli Mozzi’ for the day at the races.

Her £656 belted cream Zimmermann midi frock came with a pink floral print design, puff sleeves and a Mandarin collar. Beatrice’s waist was cinched in with a raffia belt, which matched her hat. 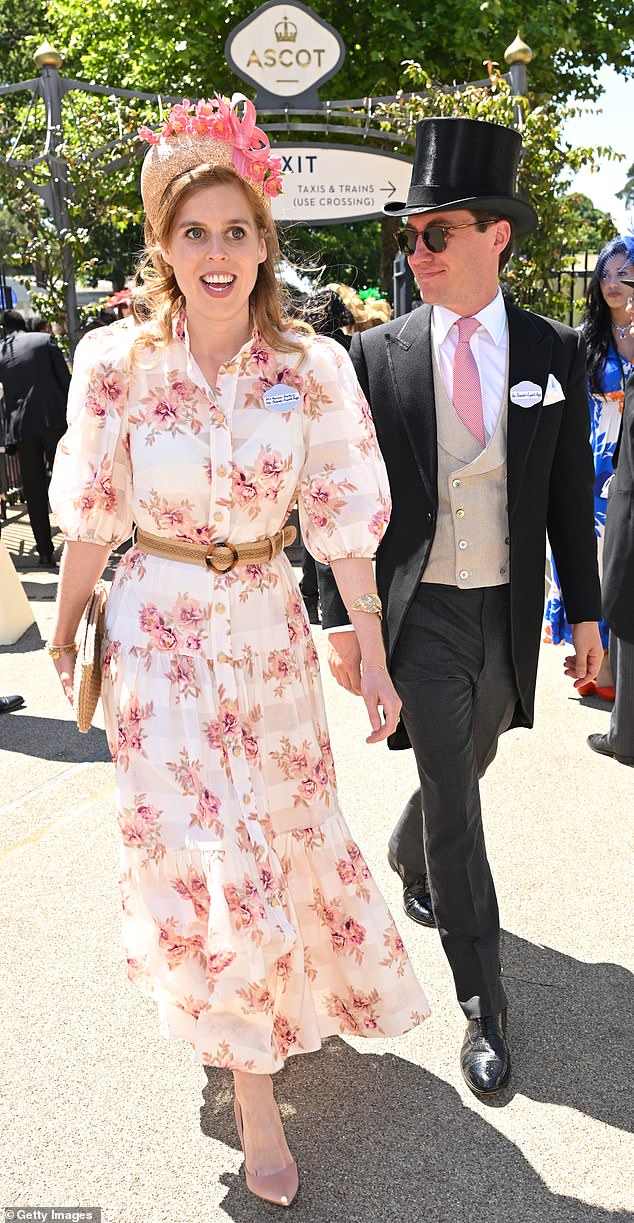 Beatrice’s £656 belted cream Zimmermann midi frock came with a pink floral print design, puff sleeves and a Mandarin collar. Her waist was cinched in with a raffia belt, which matched her hat

She paired the look with neutral heels and the £370 Juliette Botterill Millinery floral straw headband for the yearly horse-racing event.

The delicate fascinator, also in raffia, was adorned with pink flowers, which matched the royal’s choice of dress.

Her ‘B.Y’ clutch also matched her other accessories as she stepped out into the Berkshire sun.

Her strawberry blonde locks were styled in an updo tucked under her hat, with tresses cascading down her shoulders at the back. 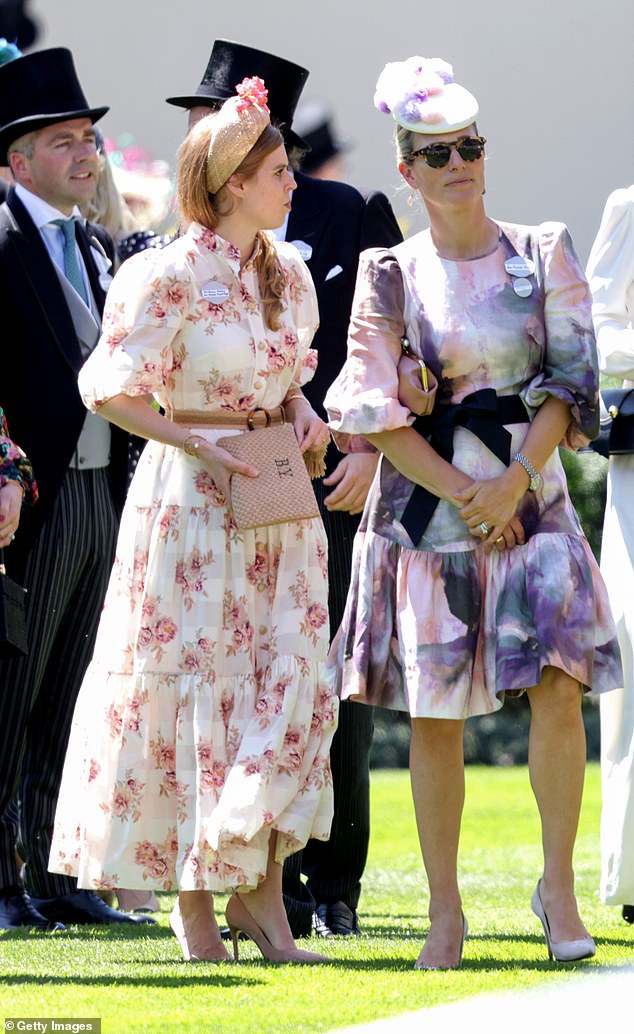 Stylish Beatrice was seen chatting with her cousin Zara Tindall, 41, by the racecourse during the event 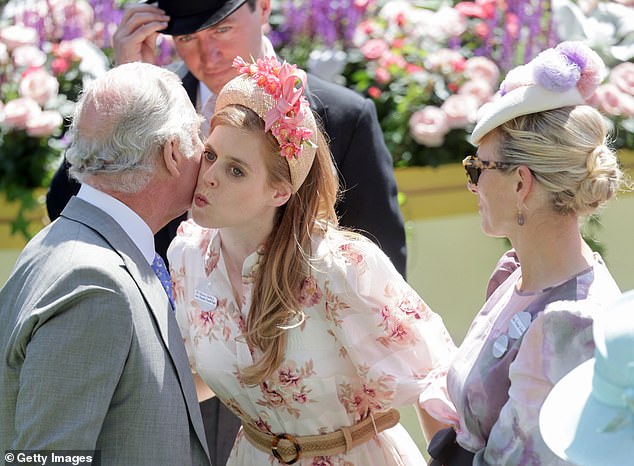 Prince Andrew’s daughter gave her uncle the Prince of Wales, 73, a kiss on the cheek as they arrived at Royal Ascot

The daughter of Prince Andrew looked very elegant in her race outfit, donning a natural makeup that highlighted her healthy glow.

The mother-of-one sported a dash of blush on the cheeks and a pink lip, as well as a discreet trait of eyeliner around her eyes.

Meanwhile, her husband of two years Edo looked dapper as he stood by her side in a morning coat and a pink tie that matched the hue of the flowers on her hat.

The couple looked relaxed as they joined Prince Charles, the Duchess of Cornwall and the rest of the royal attendees.

The royal family showed up in force at the race yesterday, while it’s been announced the Queen missed the event amid her ongoing mobility issues. 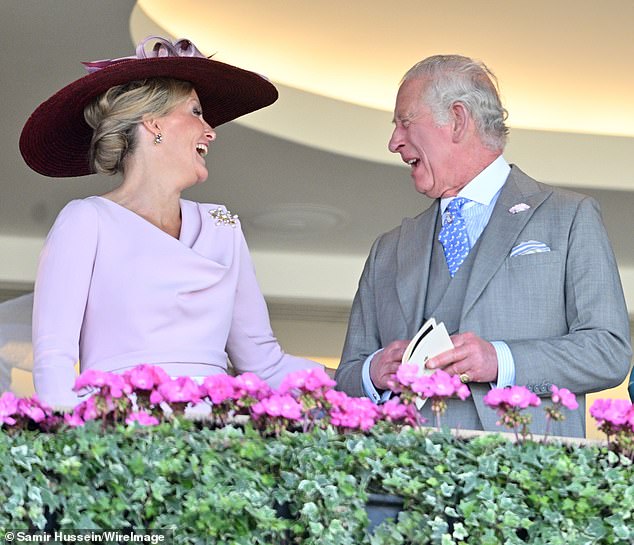 It looked like Prince Charles and Sophie Wessex, 57, were enjoying each other’s company during the racing event yesterday 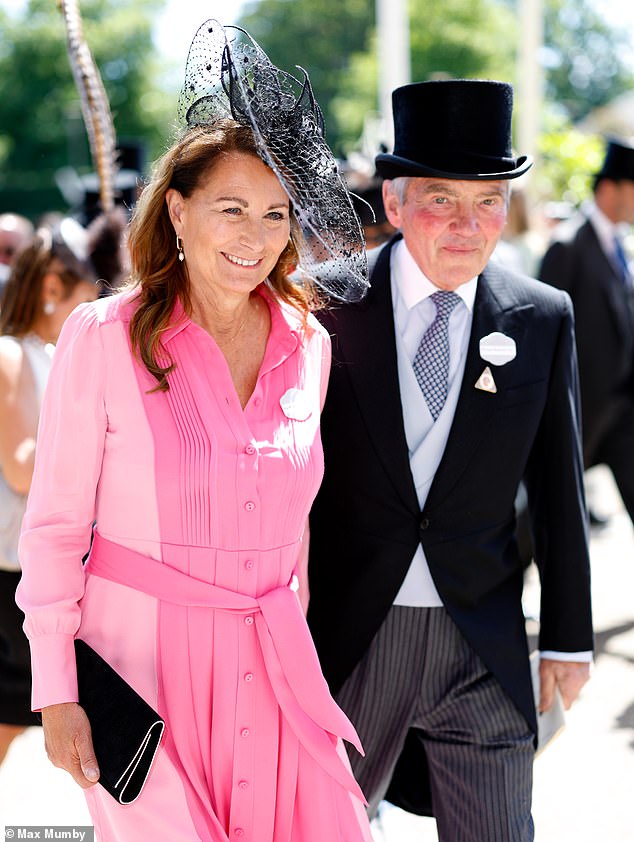 Her Majesty was a regular at the Berkshire racecourse before the pandemic and has been at every Royal Meeting since acceding to the throne in 1952, apart from when it was held behind closed doors in 2020.

However, it was suggested the 96-year-old monarch would likely be watching from home just seven miles away at Windsor Castle.

Her son the Prince of Wales, 73, and Duchess of Cornwall, 74, were in attendance alongside a host of other royals – including Princess Anne, 71, and her two children Peter Philips, 44, and Zara Tindall, 41, Countess Sophie Wessex, 57, and Princess Beatrice, and Edo.

Just over a week after the Platinum Jubilee celebrations ended, members of the royal family appeared in high spirits, with many taking part in the carriage procession, before greeting one-another in the warm summer sunshine at the racecourse.

Zara could be seen affectionately greeting her uncle Charles, as well as Princess Michael of Kent, while Princess Beatrice was also beaming with joy at the event.

Meanwhile the Duchess of Cambridge’s parents Carole and Michael Middleton also made a surprise appearance at the event today.

The Queen, who is a passionate horse breeder and has owned 22 winners of races at Royal Ascot, was among racegoers attending last year after it was selected to take part in the Government’s events research programme on behalf of the sport of racing.

She did not attend the first day of last year’s races but was later present at day five with her racing manager John Warren and inspected her four horses in the Parade Ring after they crossed the finish line.

Did Meghan and Harry have dance lessons ahead of their first dance?