A man who was caught in possession of about 20,000 fentanyl pills in New York City was released back out onto the streets of The Big Apple the very same day.

Pagen was charged with criminal possession of a controlled substance and then released on his own recognizance, police sources told The Post.

It comes just weeks after a passenger at Los Angeles International Airport was caught trying to smuggle 12,000 fentanyl pills through the airport in Whoppers, SweeTARTS, and Skittles wrappers.

Ahead of Halloween, authorities had warned that drug dealers have been disguising fentanyl in candy wrappers and manufacturing them in rainbow colors.

Manuel Pagan, 49, was arrested in Manhattan’s trendy Chelsea neighborhood on Friday with ‘approximately 20,000 multi-colored M-30 fentanyl pills’ on him and released the same day 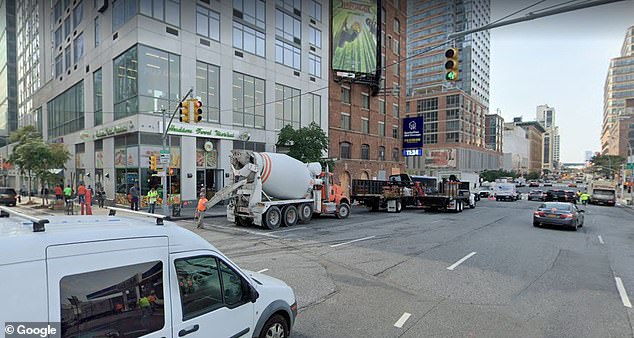 Pagan was arrested around 2 p.m. on Friday in the area of 11th Avenue and West 30th Street in Chelsea and charged with criminal possession of a controlled substance, NYPD said

Last month, about 12,000 pills were seized by sheriff’s detectives and US Drug Enforcement Administration agents after the passenger tried to go through with the pills hidden in candy and snack bags, the Los Angeles County Sheriff’s Department said.

Seizures of Fentanyl have rocketed in recent years. The latest Customs and Border Protection data shows that, in the year to August, 12,900lbs of fentanyl has been seized.

The data also shows that three times more fentanyl was seized in the first eight months of this year than in the entire year of 2020 – and more than four times the total for 2019.

In September 2021, the Drugs Enforcement Agency (DEA) launched One Pill Can Kill – a public awareness campaign to combat the fake pill threat and educate the public about the dangers of fentanyl pills being disguised and sold as prescription medications.

They stressed that drug traffickers have expanded their inventory to sell fentanyl in a variety of bright colors and packages. 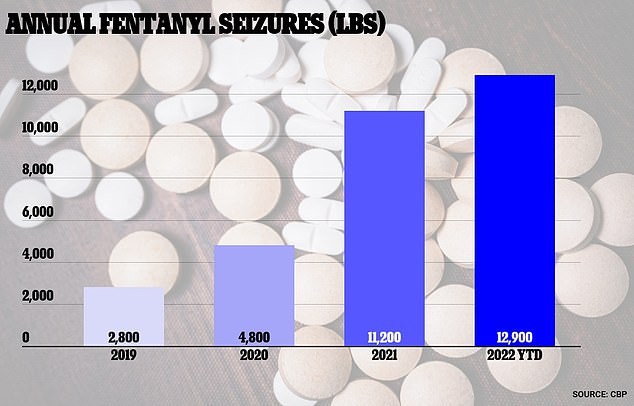 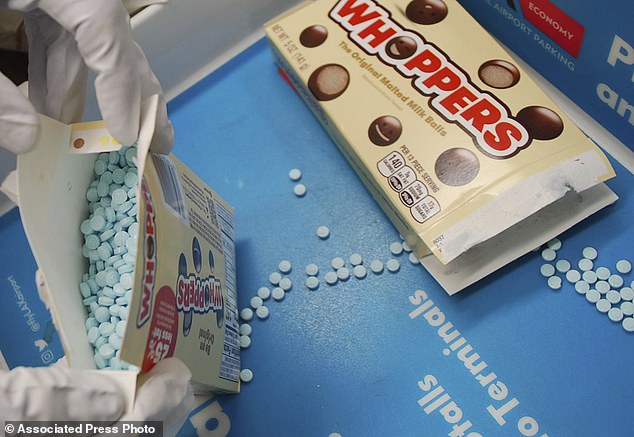 Last month, a passenger at Los Angeles International Airport was caught trying to smuggle 12,000 fentanyl pills through the airport in Whoppers, SweeTARTS and Skittles wrappers 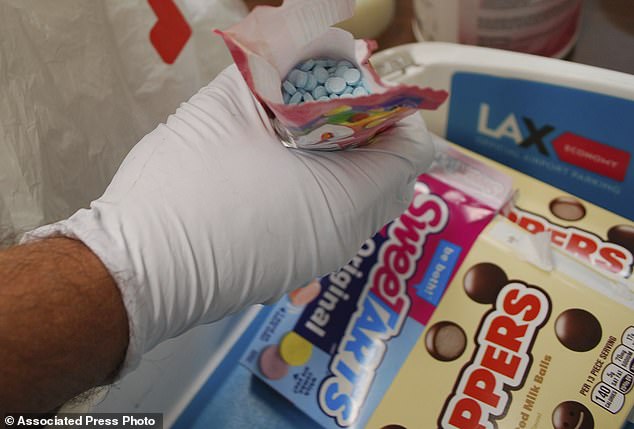 An estimated 12,000 fentanyl pills were contained inside the packets of candy and snacks

What is fentanyl and why is it so dangerous?

Fentanyl was originally developed in Belgium in the 1950s to aid cancer patients with their pain management.

Given its extreme potency it has become popular amongst recreational drug users.

Overdose deaths linked to synthetic opioids like fentanyl jumped from nearly 10,000 in 2015 to nearly 20,000 in 2016 – surpassing common opioid painkillers and heroin for the first time.

It is often added to heroin because it creates the same high as the drug, with the effects biologically identical. But it can be up to 50 times more potent than heroin, according to officials in the US.

In the US, fentanyl is classified as a schedule II drug – indicating it has some medical use but it has a strong potential to be abused and can create psychological and physical dependence.

Rainbow fentanyl was first reported to DEA in February 2022, and it has now been seized in 21 states, the DEA said last month.

Around 300,000 rainbow fentanyl pills and 22 pounds of the drug in powdered form – with a combined street value of $9 million – were seized from an apartment in the Bronx.

The DEA has claimed that the rainbow-colored fentanyl pills are part of a marketing scheme by Mexican drug cartels to drive addiction among kids and young adults.

The record-breaking Bronx bust came around a week after 15,000 pills were recovered in Manhattan, on September 28.

They were hidden in plastic bags in a LEGO box and were being carried in a tote bag by a woman on 10th Avenue.

‘Disguising fentanyl as candy – and concealing it in children’s toys – will never hide the fact that fentanyl is a deadly poison that harms our communities, our families, and our city,’ said Keechant Sewell, NYPD Commissioner.

And then in March 2021, three New York City professionals all died on the same day after ordering cocaine from the same delivery service.

A report from the Wall Street Journal detailed last month how Ross Mtangi, 40, a trading executive at Credit Suisse Group AG; Julia Ghahramani, 26, a first-year lawyer; and Amanda Scher, 36, a social worker, all died on March 18, 2021, after getting cocaine laced with fentanyl delivered. 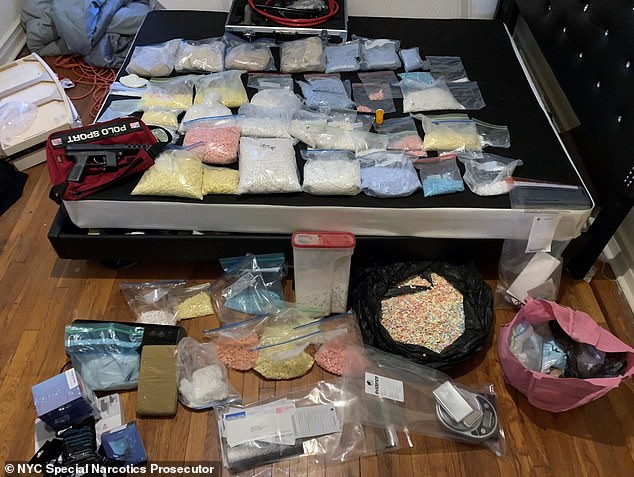 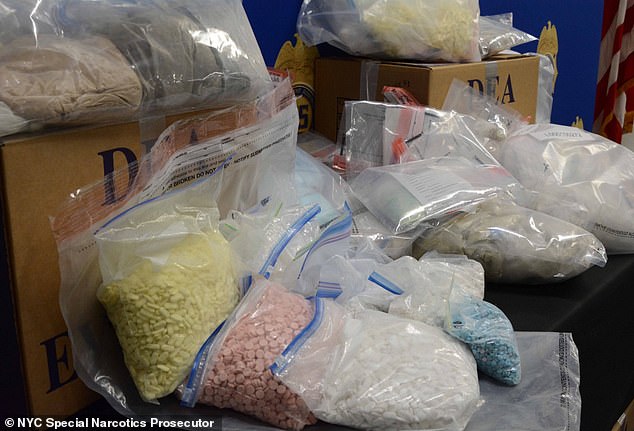 Around 300,000 rainbow fentanyl pills and 22 pounds of the drug in powdered form – with a combined street value of $9 million – were seized from an apartment in the Bronx 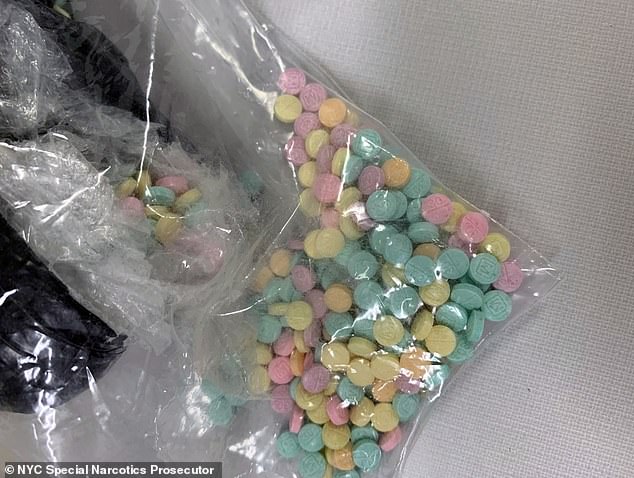 Prosecutors say the three professionals ordered the drugs from Billy Ortega, whom they accuse of arranging New York City drug deals from his home. His attorneys, though, have claimed he is just a stay-at-home father from New Jersey.

The drugs were then allegedly delivered to the victims by Kaylen Rainey, a courier for Ortega who lives in an apartment registered to Ortega’s family.

But the victims apparently did not realize that the cocaine, which remains popular amongst New York City elites, was laced with fentanyl — a powerful opioid that dealers cut into cocaine to make it more potent and addictive.

Just a small amount of fentanyl could kill an inexperienced user.

Both Ortega and Rainey have since pleaded not guilty to causing the three deaths and distributing drugs, and are awaiting trial.

They had previously been arrested for committing a robbery together in 2016,  according to the criminal complaint. 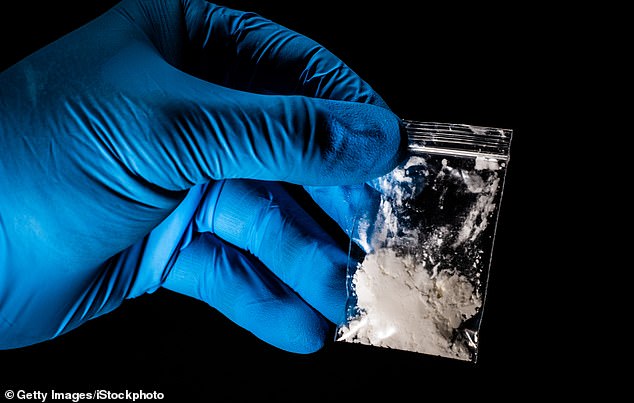 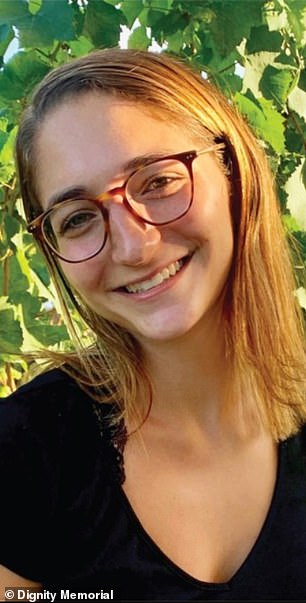 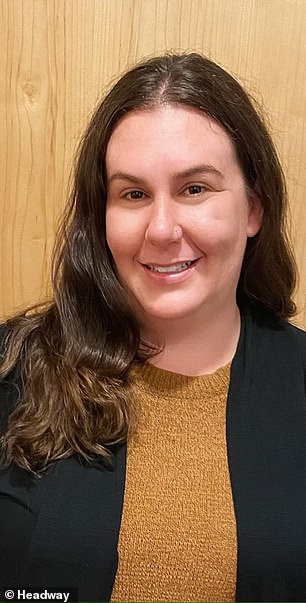 Julia Ghahramani, 26, a first-year lawyer, and Amanda Scher, 36, a social worker, died on March 18, 2021 after ordering cocaine from a delivery service 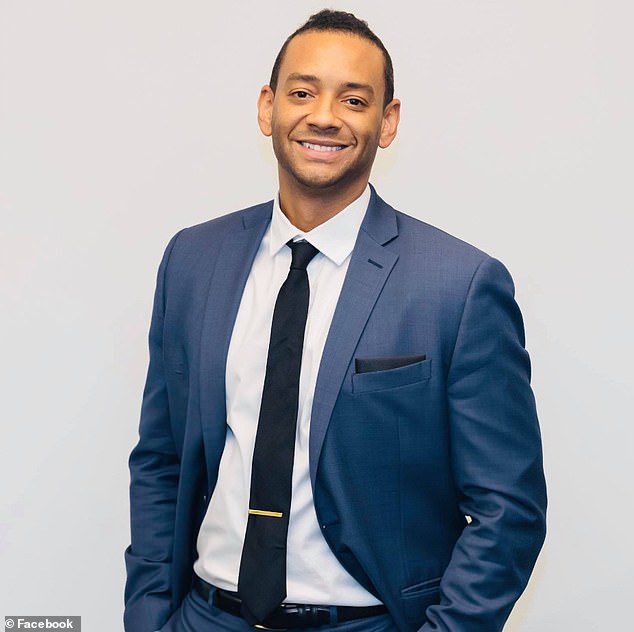 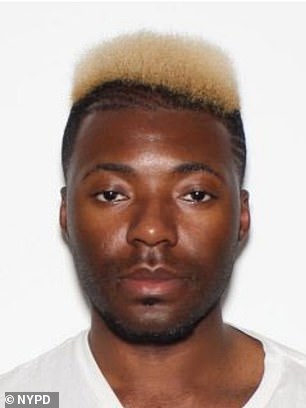 Prosecutors say Kaylen Rainey (pictured) delivered the drugs to the victims, working for Billy Ortega. He has pleaded not guilty to causing the three deaths and distributing drugs, and is awaiting trial

Cocaine has been a popular drug amongst New York working professionals since the 1980s when it became associated with jet setters and elite professionals.

Usage estimates in the city now remain higher than the two percent national rate of Americans taking the drug annually for the past two decades, the Journal reports.

The addition of fentanyl over the past decade, meanwhile, has tripled the yearly number of New Yorkers dying.

Of 980 cocaine deaths in 2020, 81 percent involved fentanyl, according to the most recent New York City health department data.

And drug use has only increased during the pandemic, with deaths hitting an annual high of 107,521 in 2021, according to the Centers for Disease Control, up 51 percent since 2019.

Nearly three-quarters of those deaths have involved fentanyl.

They have also handed out fentanyl testing strips that can be used to test cocaine and other drugs for fentanyl.

Meanwhile, crime in the Big Apple remains up 29.1 percent over the past year.

Robberies are up 31.5 percent and felony assaults are up nearly 14 percent, with police recording 22,319 cases so far this year, and rapes have increased by nearly 11 percent. 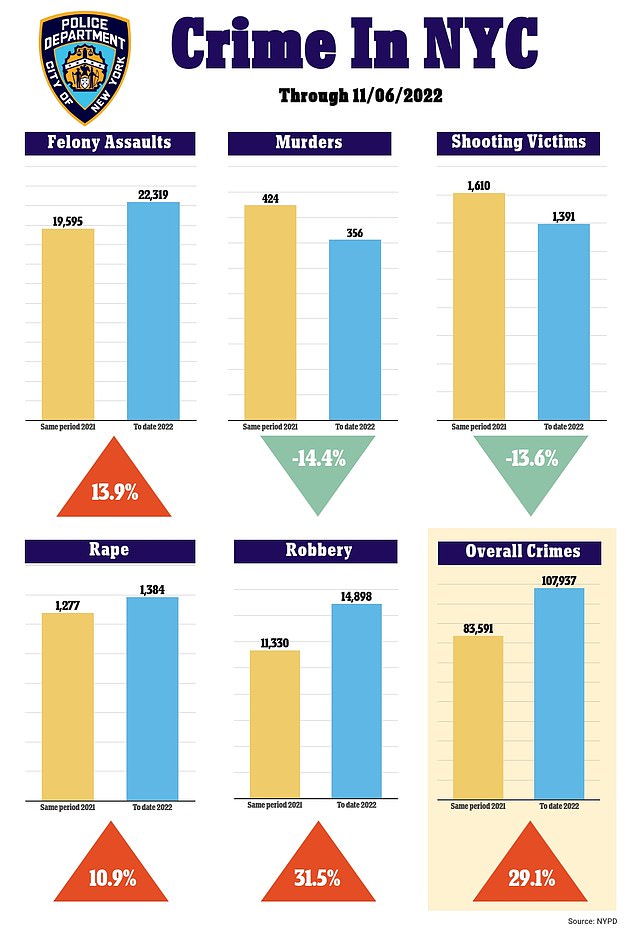 Overall crime in the Big Apple is up 29.1 percent from last year

Girl who was ‘stolen’ by travellers aged four but reunited with her birth family...

‘Keep your nose out of my business!’ Love Island’s Gemma fumes at Ekin-Su for...