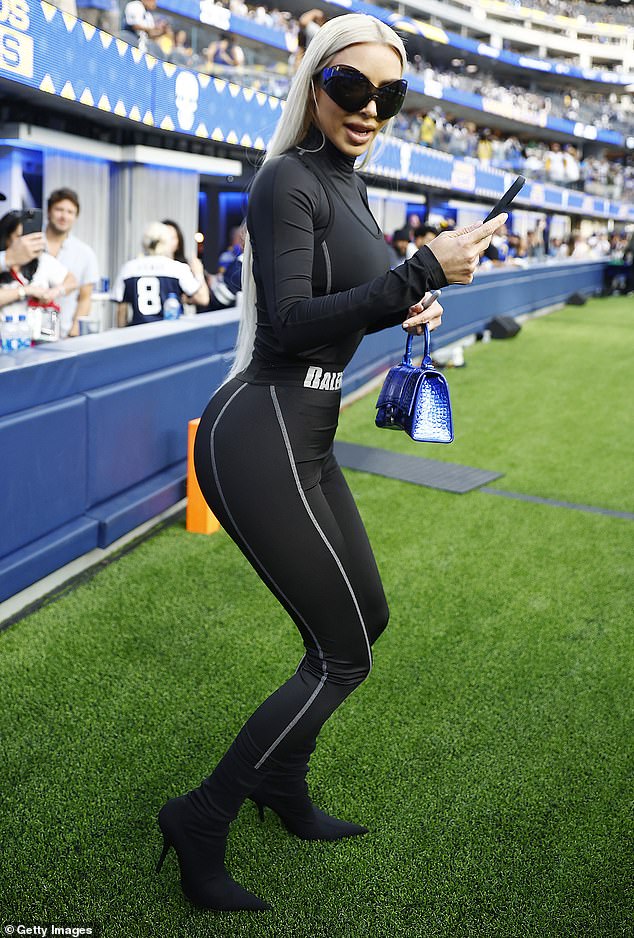 Kim Kardashian made a show-stopping appearance as she stylishly attended the Los Angeles Rams vs. Dallas Cowboys football game at SoFi Stadium after her ex Kanyue West was embroiled in another controversy with shock anti-Semitic outburst which left him suspended on both Twitter and Instagram.

The reality star, 41, was accompanied by her six-year-old son, Saint, as they happily watched the anticipated game together earlier Sunday.

The beauty was decked out from head to toe in Balenciaga pieces, while her son showed his support for the LA Rams by wearing the team’s blue color. 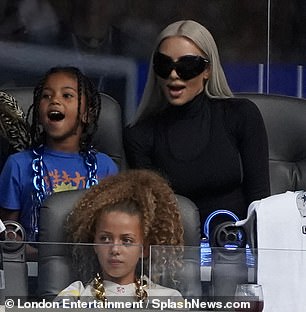 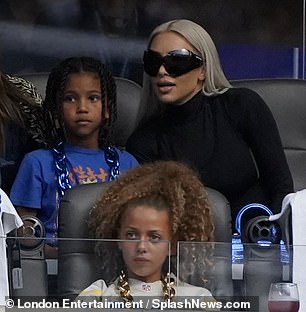 Watching from the stands: The reality star and her son, whom she shares with ex-husband, Kanye West, were seen intensely watching the sport 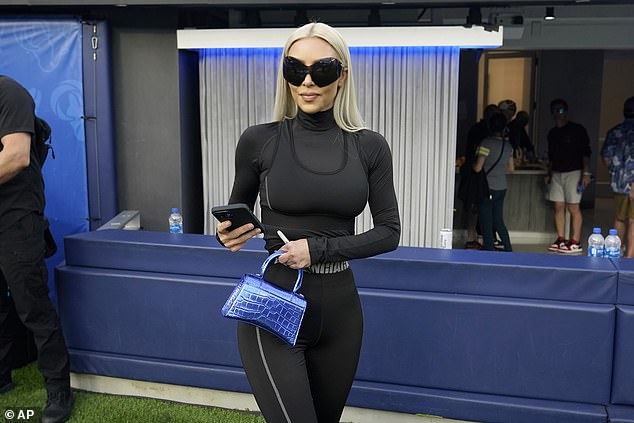 Picture time: The mother of four was seen taking a few memorable snaps of her son, Saint, during the exciting game

The mother of four, Saint, Chicago, Psalm, and North, whom she shares with her ex-husband, Kanye, donned a luxurious ensemble to attend the game.

She slipped into a pair of figure-hugging Balenciaga leggings that contained a gray stripe, along with the brand’s logo printed on the waistline.

The activewear piece, which is priced around $795, showcased her fit physique and curves.

Kim added a long-sleeved shirt and added a Balenciaga sports bra on top for a stylish edge to her ensemble. The sports bra can be purchased at $650.

For an additional pop of color, the TV personality carried a vibrant blue $3000 Balenciaga crocodile handbag, also showing her support for the LA Rams. 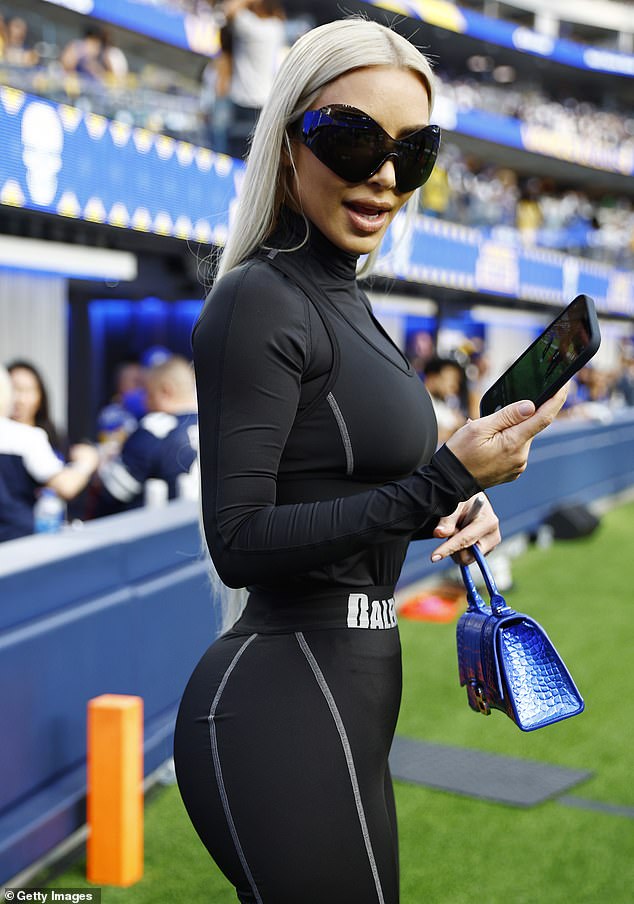 Sunday outing: Kim was pictured holding her phone in her hand as she awaited to take a few snaps of her son, Saint, on the field 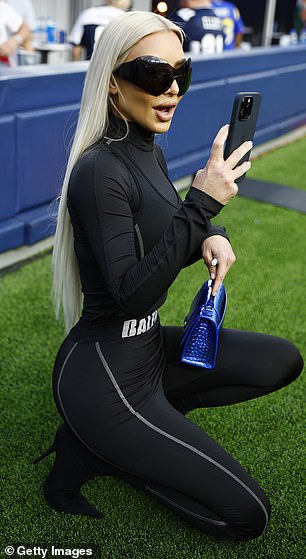 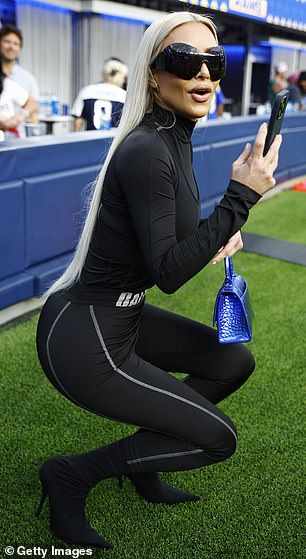 Getting the perfect picture: The star knelt down on the ground to take a few snaps

To accessorize her look for the special outing, the talented beauty donned a pair of large, black sunglasses.

Her blonde locks were parted in the middle, allowing her hair to fall straight past her shoulders.

Kim slipped into a pair of high-heeled, black ankle boots to complete her overall ensemble for the game.

Her son, Saint, appeared to be in high spirits as he donned a blue, printed T-shirt to support the LA Rams. He added a large blue necklace for an added accessory piece.

Later on in the day, Saint donned a Rams number five jersey along with a cap, and posed for a small photo session wearing the outfit. 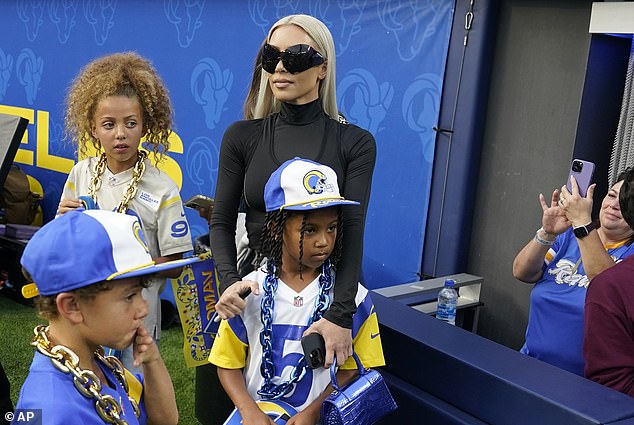 New outfit: Later in the day, Saint donned a LA Rams jersey along with a hat to support the football team 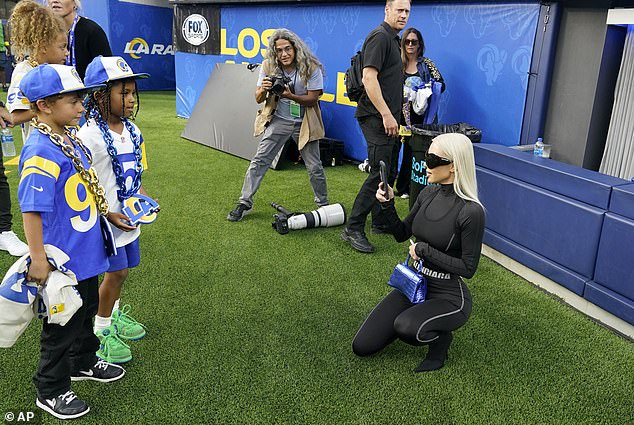 Cute! Kim was seen kneeling down on the green turf to take a few snaps of her son with a fellow friend who also attended the game 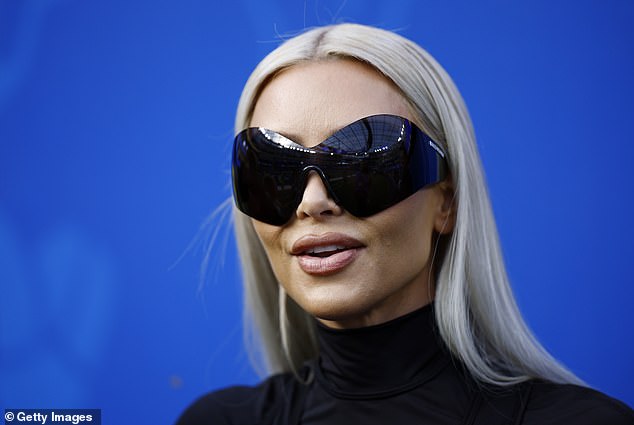 Balenciaga: Kim donned a Balenciaga ensemble, including her sunglasses, after collaborating with the brand during Milan Fashion Week

Shortly after kickoff, Kim and Saint were pictured sitting in the stands and cheering on their team.

The SKIMS founder was seen filming her son as he excitedly jumped up and down when the LA Rams scored or threw a successful pass.

Following the game, Kim took Saint down to the field to take a few memorable snaps. She could be seen kneeling down on the turf to get perfect angles for the photos.

The mother son duo appeared to be in high spirits as they enjoyed a relaxing Sunday outing to watch the beloved sport.

Kim also shared an assortment of photos and videos onto her own Instagram story that captured a few moments during the day. 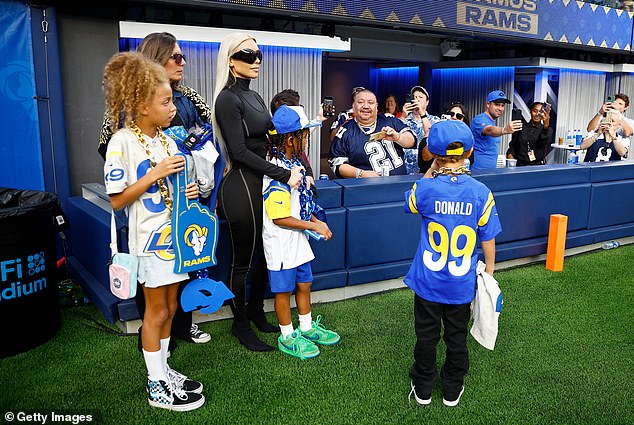 Waiting: Kim’s arms were gently wrapped around her son as they awaited their turn to take photos on the field following the game 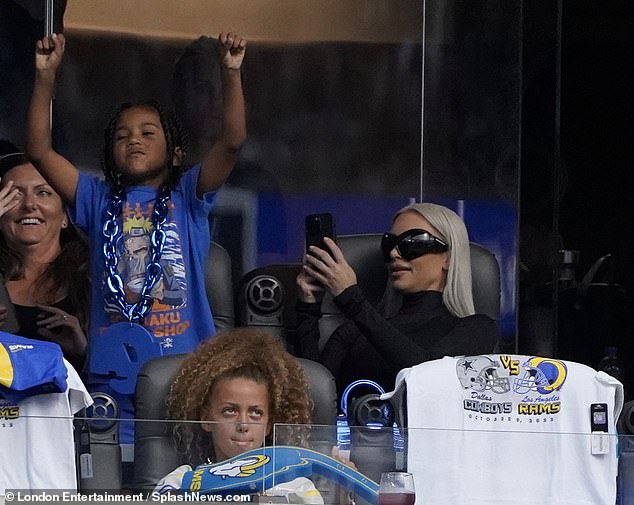 Fun: Kim was spotted filing her son, Saint, as he happily cheered for his team in the stands 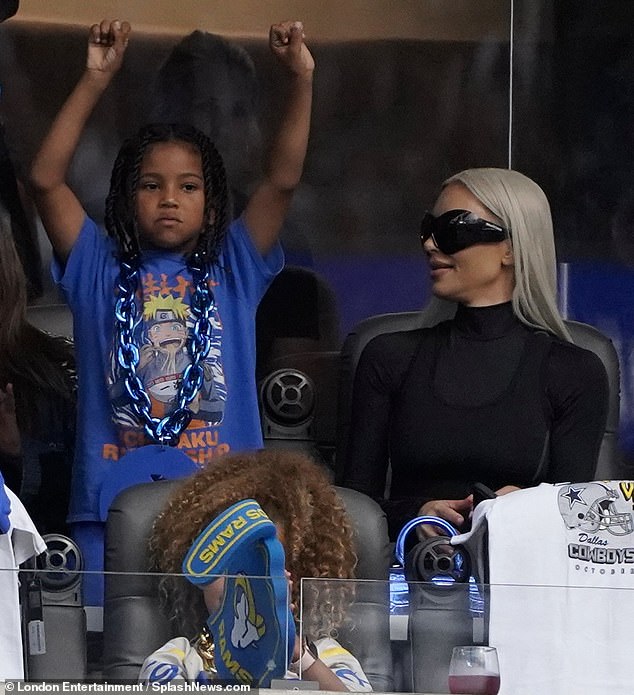 Quality time: Amid her busy schedule, Kim seemed to be enjoying spending quality time with her son during the weekend 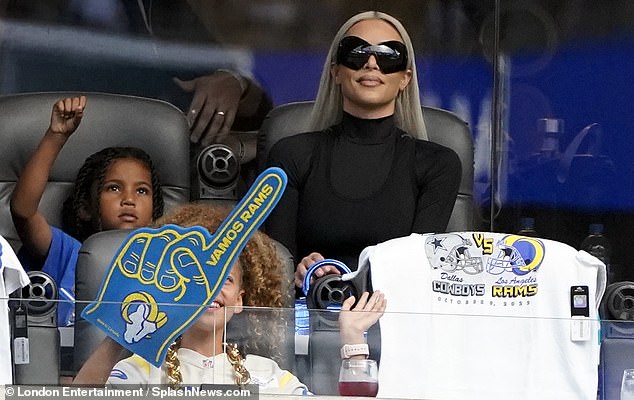 Having fun: The two were pictured keeping track of the game score as they watched from above

The star, who is in the process of studying law, gave a behind the scenes glimpse of her time at the LA Rams game on her Instagram to her 331 million followers.

She shared a snap that she had taken when the two stepped down onto the field in the crowded stadium. Saint was pictured next to a friend who had also attended the anticipated game. The two adorably posed next to the end zone.

Kim also shared a photo of her Rams merchandise, with her Balenciaga bag placed in the middle of the items.

A few reels were uploaded, where she filmed Saint celebrating the Rams scoring a touchdown. He could be seen jumping up and down, while waving his hands in the air as he supported the team.

The businesswoman gave a look of her viewpoint of the field from their seats in the large stadium. 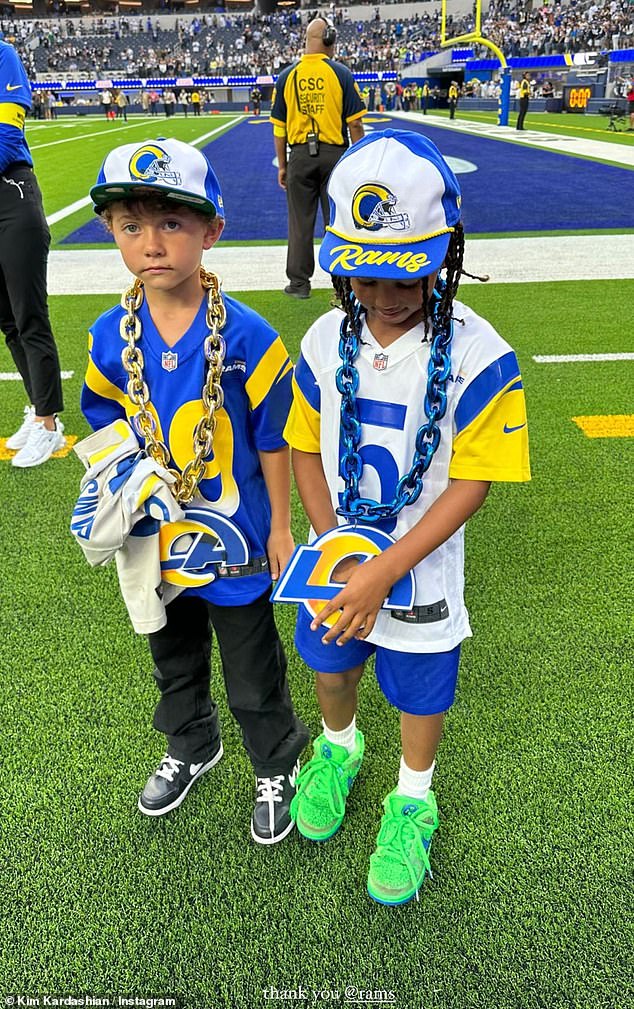 Buddies: Saint was pictured next to a friend who also attended the game as they posed next to the end zone on the football field 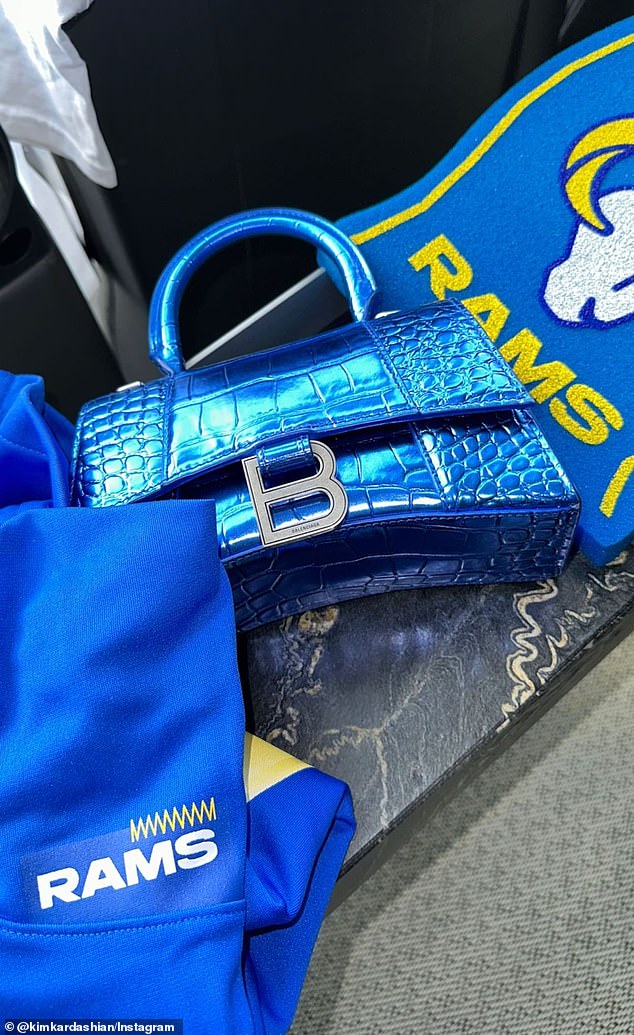 Memorable snaps: As she sat in the stands, Kim took a picture of a few merchandise items along with her blue Balenciaga handbag, which supported the Rams team color 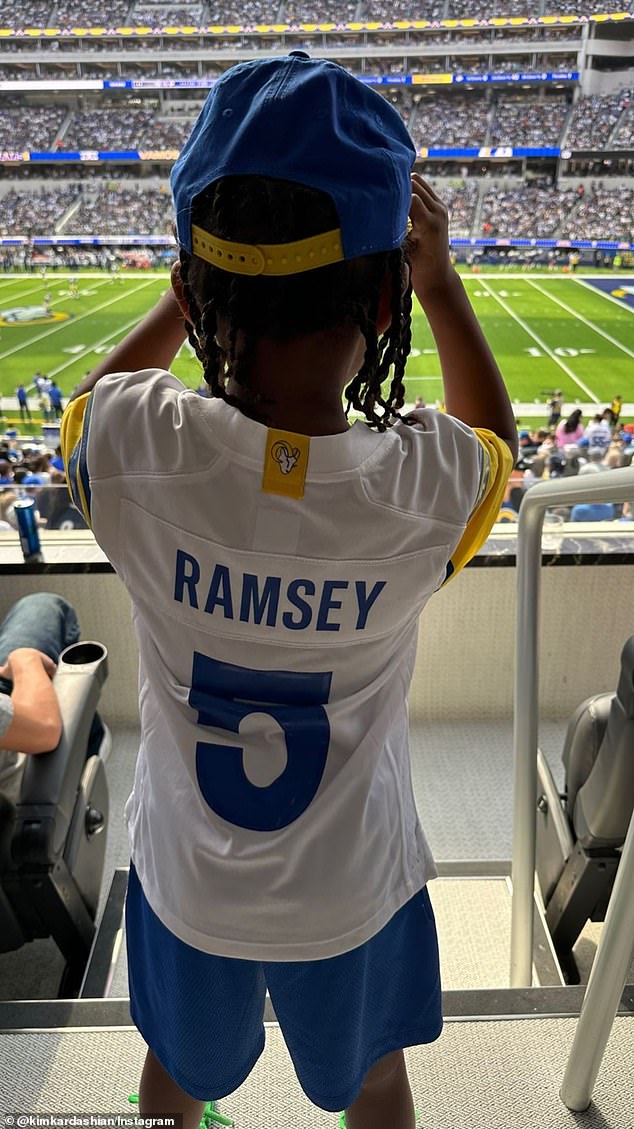 Supporting his team: Saint later donned a jersey with the number five printed on the front and back in support for cornerback, Jalen Ramsey 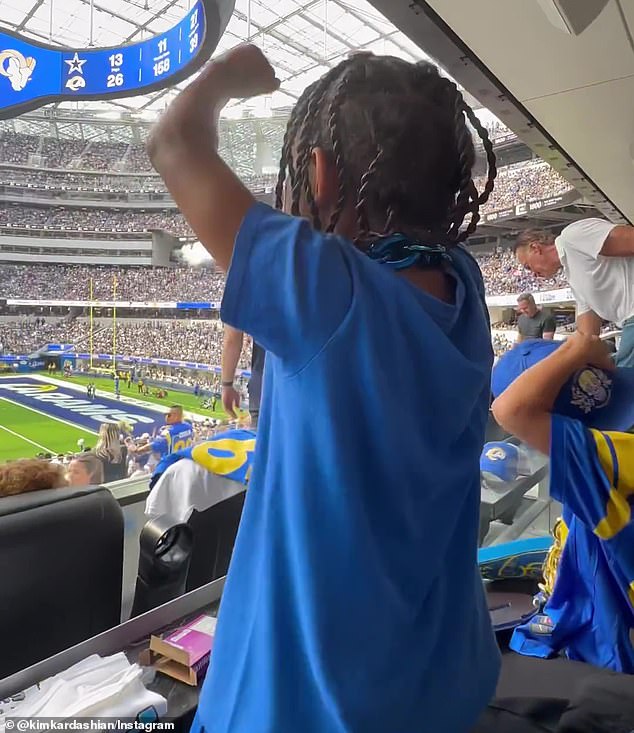 Touchdown: Kim filmed her son celebrating the La Rams scoring a touchdown during the football game

Kim and her son’s outing to the football game on Sunday occurred not long after Kanye, also known as Ye, came under fire for his recent anti-Semitic tweet against the Jewish community.

The blowback from A-listers came as both Twitter and Instagram face huge criticism at their apparent reluctance to delete anti-Semitic comments from the site.

In a post, that has since been removed by Twitter, Kanye wrote: ‘I’m a bit sleepy tonight but when I wake up I’m going death con 3 On JEWISH PEOPLE.’

He added: ‘The funny thing is I actually can’t be Anti Semitic because black people are actually Jew also.

‘You guys have toyed with me and tried to black ball anyone whoever opposes your agenda.’ 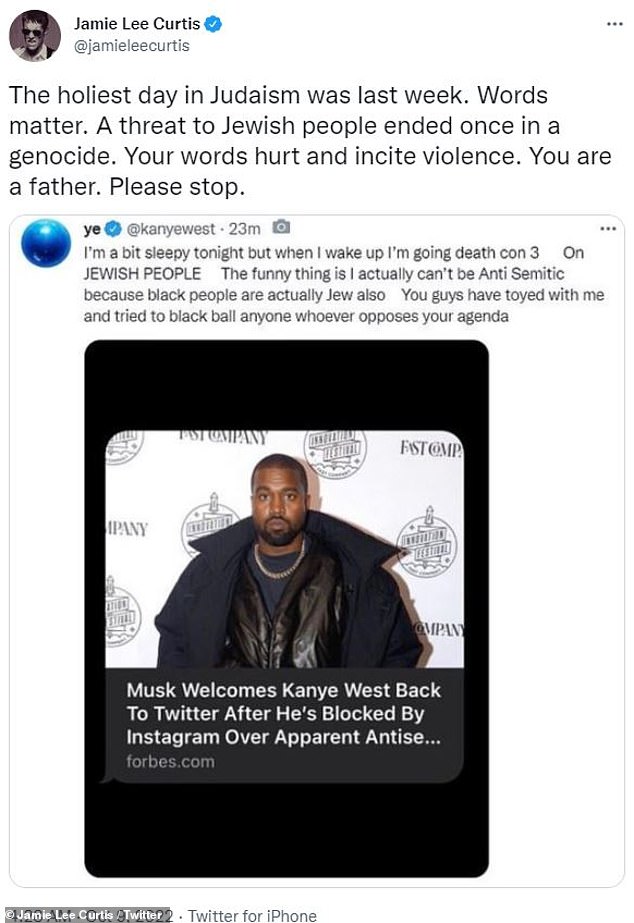 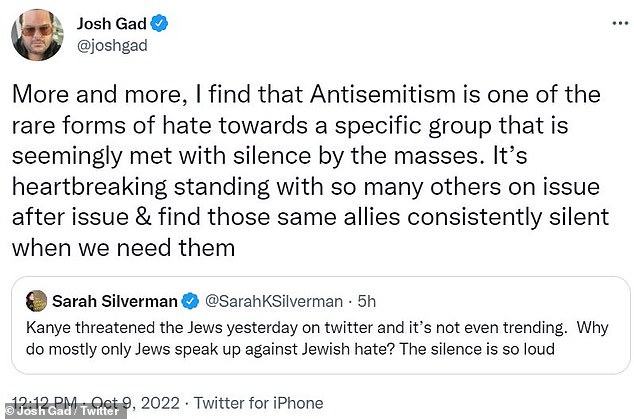 Jamie Lee Curtis spoke about the timing of West’s words, coming a week after Yom Kippur, adding: ‘Words matter. A threat to Jewish people ended once in a genocide.’

Silverman, 51, tweeted: ‘Kanye threatened the Jews yesterday on twitter and it’s not even trending. Why do mostly only Jews speak up against Jewish hate? The silence is so loud.’

Hours after posting, West was locked out of his Twitter account – as Jewish celebrities and politicians condemned him for the vile online abuse.

A Twitter spokesman said of West’s remarks: ‘The account in question has been locked due to a violation of Twitter’s policies.’ This means that the rapper will be unable to post.

Backlash: A Twitter spokesperson recently announced: ‘The account in question has been locked due to a violation of Twitter’s policies’

Liverpool fans line the streets around the city as Jurgen Klopp’s men show off...

WORLD CUP 2022 LIVE: England to go with unchanged side against France