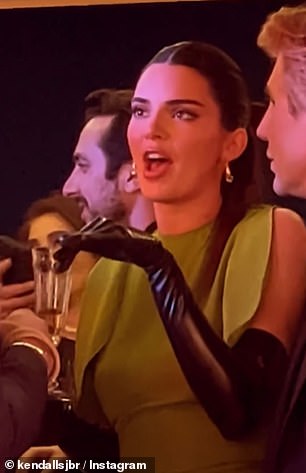 Multi-millionaire Kendall is being slammed online for her jaw-dropping entitlement after sneering at ‘horrible horrible’ Dubai while attending a lavish opening of the new A-list Atlanits hotel.

The 27-year-old had been attending the grand opening of the new hotel Atlantis, The Royal Dubai, during which fans believe they caught her making the elitist comments.

In a video shared on TikTok Kendall was seen wearing a green dress with shoulder-length black gloves at an after party and although she couldn’t be heard is believed to be mouthing: ‘This is my third time. The first two times were horrible! Oh my god!’

Social media users fumed at the outrageous statement calling out the Kardashian sister for being ‘entitled’ and ‘fake’ and out-of-touch with her own opulent lifestyle. 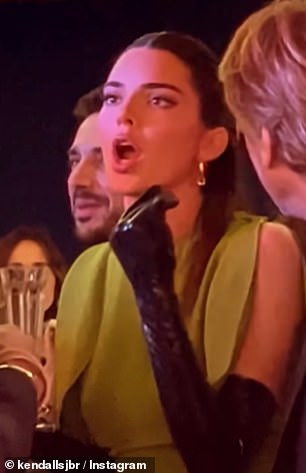 Kendall Jenner was filmed apparently mouthing that her first two visits to Dubai were ‘horrible, horrible’ as she partied at Atlantis The Royal opening bash

Critics slammed her for flaunting her wealth, one person said: ‘So unlikeable. The nerve!’

Another commented: ‘She really gives off a bad vibe. Sorry, not sorry.’

A third raged: ‘Kendall seems so fake, forced, and attention-seeking at the party.’

‘Kendall comes off snobby, delusional, and entitled,’ said yet another user.

Meanwhile one mocked: ‘I wish I could afford a horrible experience from Dubai too!’

The young Victoria’s Secret model is no stranger to fame, luxury and exclusivity coming from a long lineage of female entrepreneurs and celebrities. 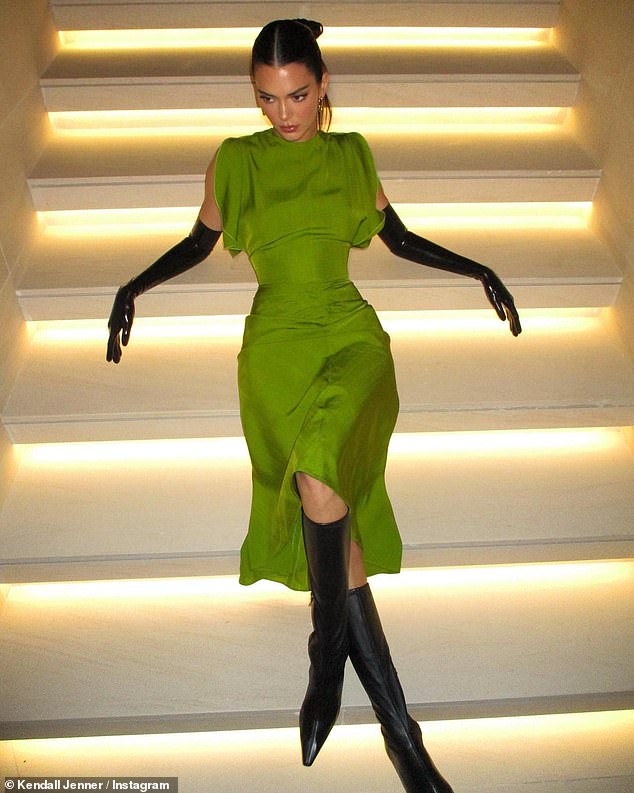 The young Victoria’s Secret model is no stranger to fame, luxury and exclusivity coming from a long lineage of female entrepreneurs and celebrities 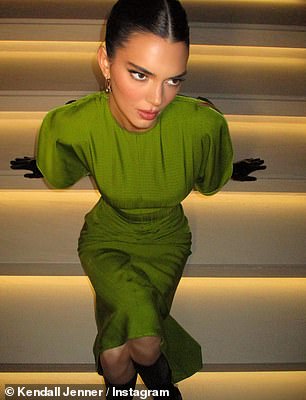 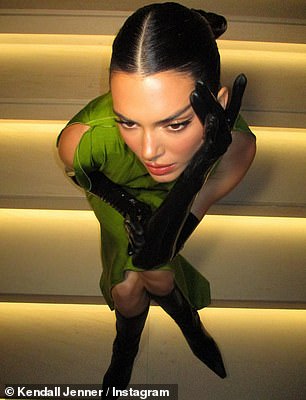 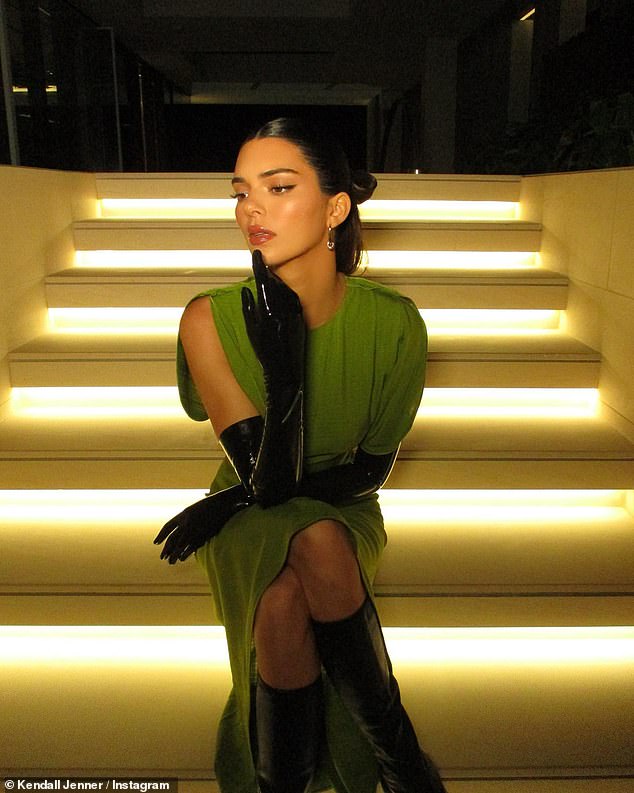 Critics slammed her for flaunting her wealth, one person said: ‘So unlikeable. The nerve!’

She started the lavish weekend on Friday night, attending the grand re-opening of Nobu Dubai, followed by the after party for her liquor brand, where she made the fiery comments.

She, previously enjoyed a trip to Dubai to ring in 2015 on New Year’s Eve with stars such as Gigi Hadid and Selena Gomez – before famously cutting ties with the latter.

At the time, the group shared a series of snaps from the trip as they appeared to be partying it up for the New Year’s celebrations free of charge and were paid to post pictures and videos from the trip. 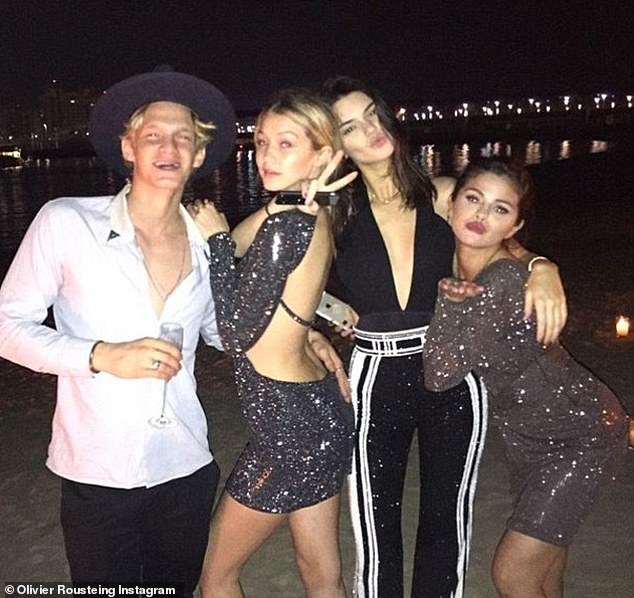 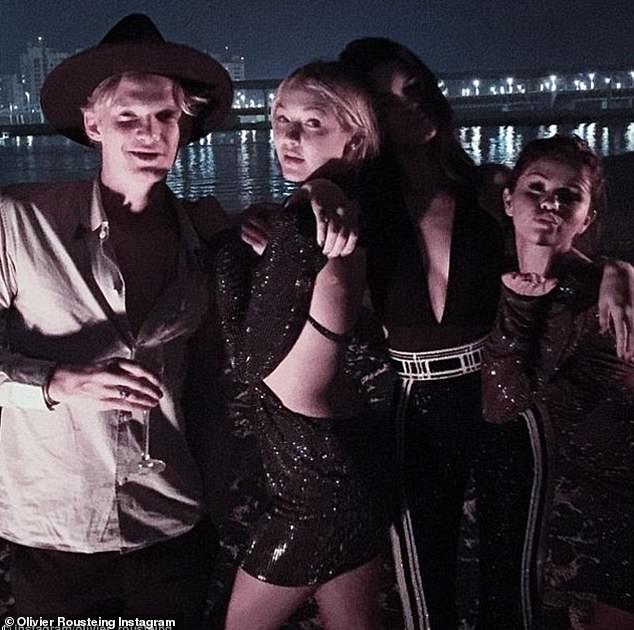 Having a good time? At the time, the group shared a series of snaps from the trip as they appeared to be partying it up for the New Year’s celebrations 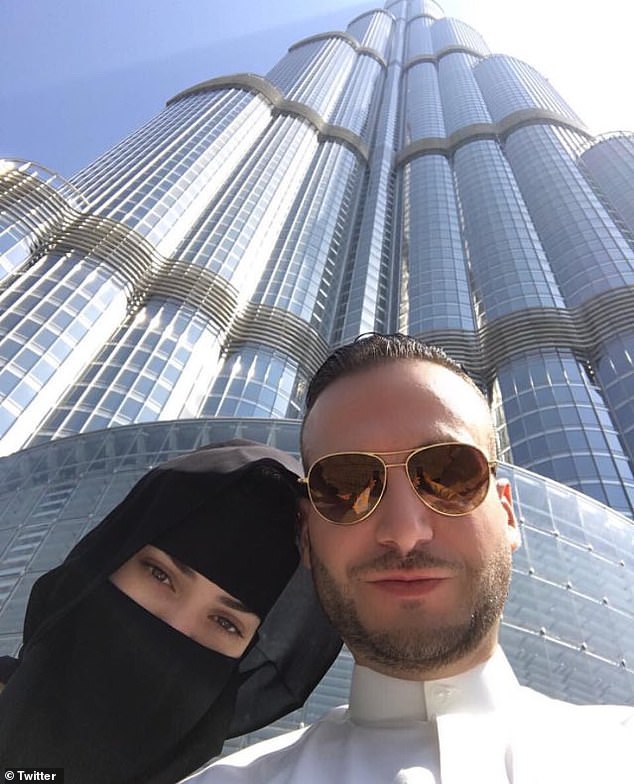 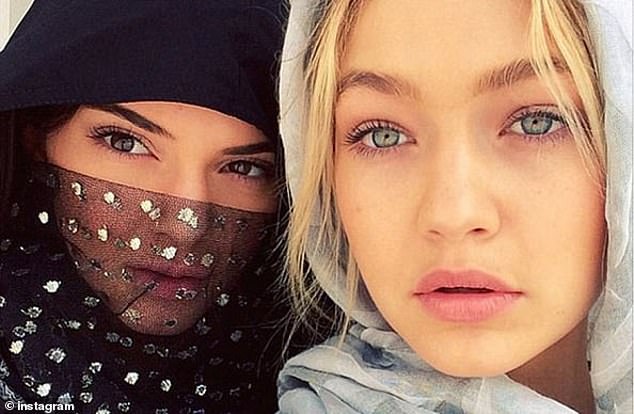 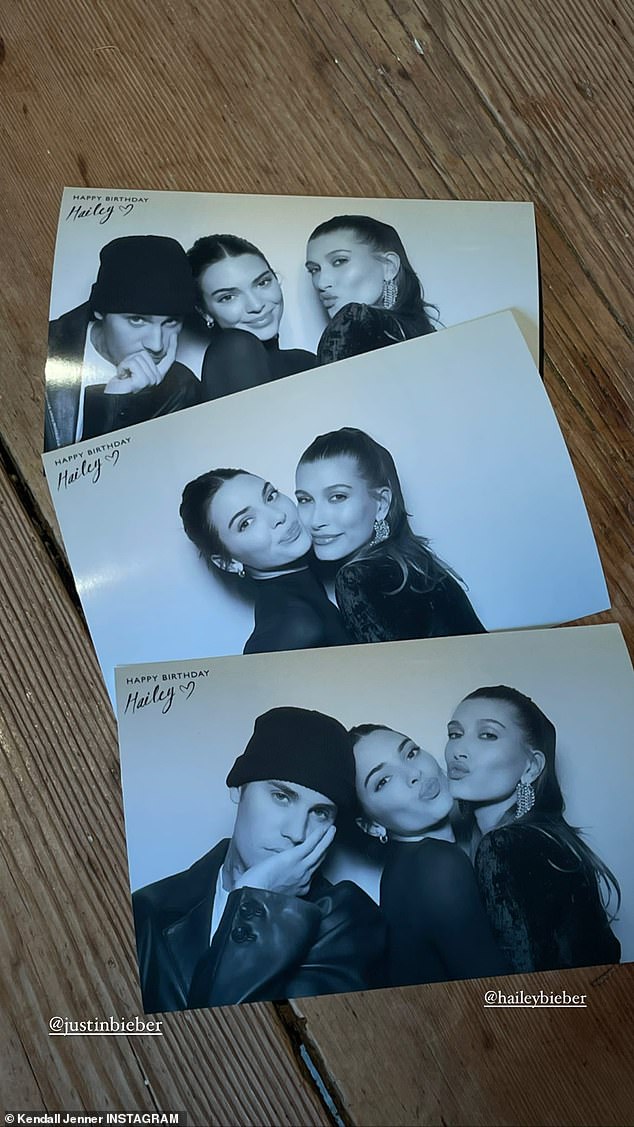 Kendall is reported to have fallen out with Selena years ago, but has remained close pals with her ex-boyfriend Justin Bieber and his now-wife Hailey

Kendall previously shared her travel stats for the year of 2016, with the longest flight being from L.A to Dubai, it remains unclear why she was there that year.

However, that same year, she was gifted a Rolls-Royce from Saygin Yalcin, a Dubai-based German entrepreneur and academic lecturer of Turkish origin.

Third time appeared to be the charm, however, as she was seen partying with a star studded list of celebs at the lavish opening’s which featured a performance by Beyoncé.

Kendall and Selena have famously parted ways and haven’t been seen together in years – with the model’s new claims suggesting that they didn’t quite get along on the trip.

While the source of their feud has never been revealed, the pair are said to have fallen out over Selena’s ex-boyfriend Justin Bieber. 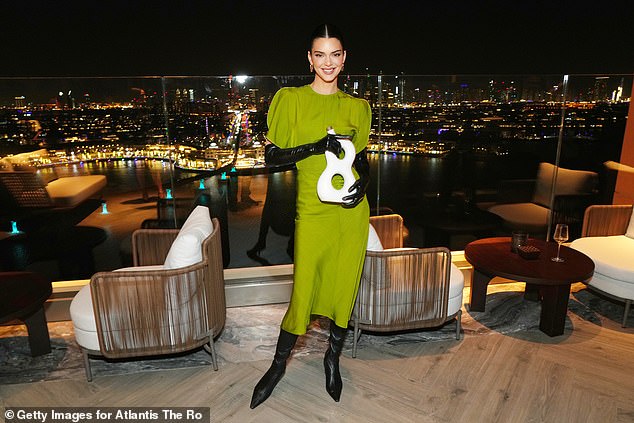 Kendall, who is the proud owner of 818 tequila, brought it to the Dubai hotel’s opening with guests sharing videos and pictures drinking the celebrity liquor 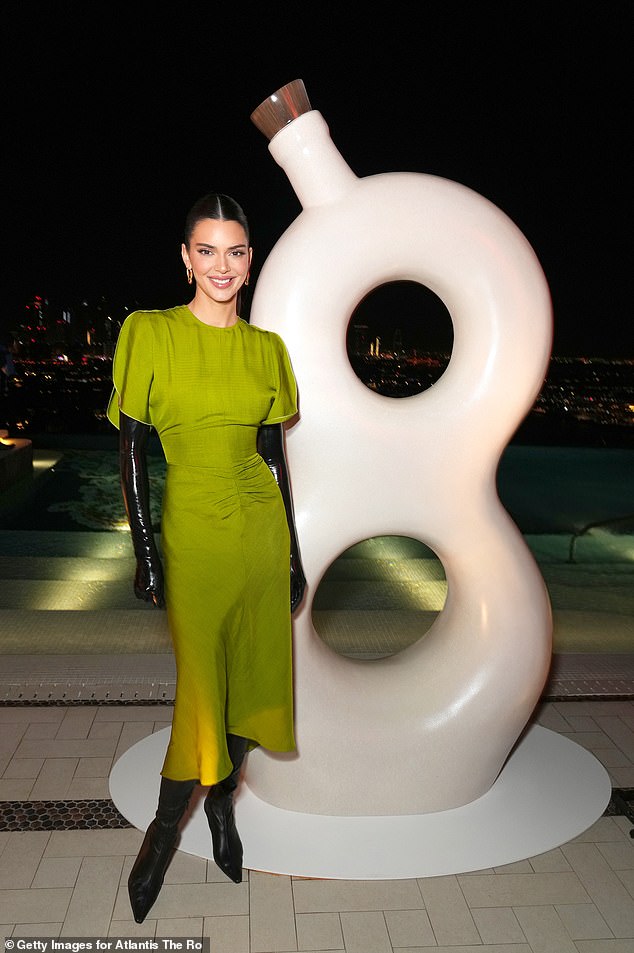 Despite Kendall being close to the singer and his now-wife Hailey, it was once reported that actress Selena caught Kendall and Justin getting cozy – although the rumors are yet to be confirmed.

It has also been reported that Kendall and her sister Kylie saw Selena as a ‘bad influence’, with TMZ reporting that the sibling duo thought the Disney star was ‘out of control’ back in 2014.

Gigi also went on a trip to Dubai with her then-boyfriend Cody and Kendall.

The pair were pictured holding hands at the 2021 Met Gala in a sweet moment, but rumor’s circulated that they have since grown apart. 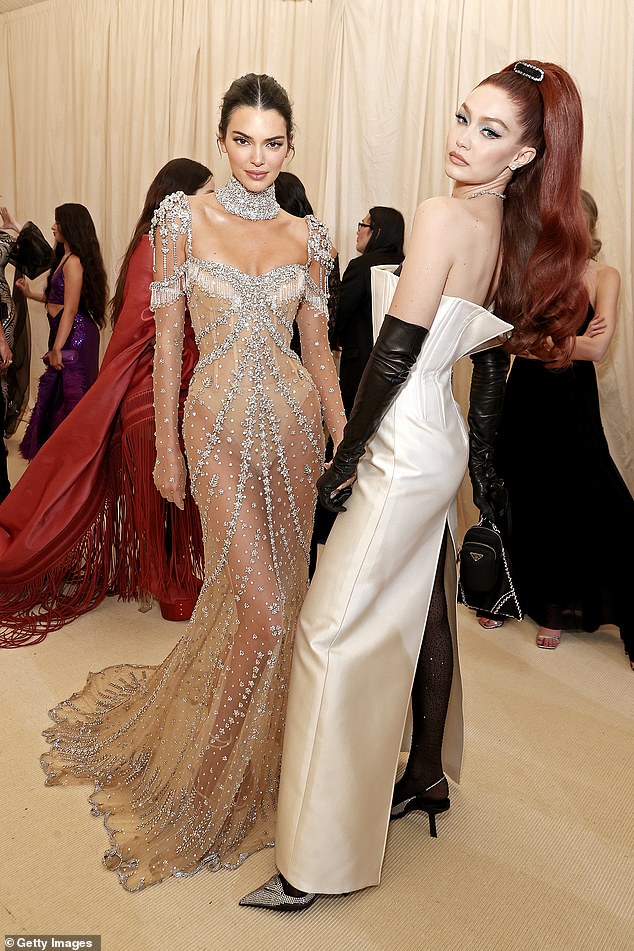 Gigi, who was also on the 2015 trip, appears to have remained friends with Kendall – posing together at the 2021 Met Gala 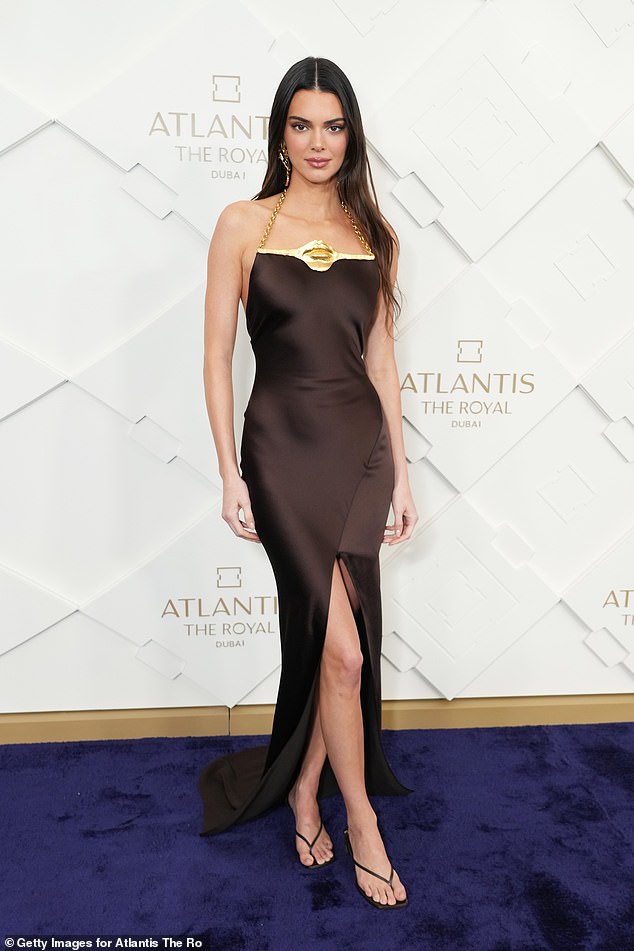 Third time appeared to be the charm, however, as she was seen partying with a star studded list of celebs at the lavish opening’s which featured a performance by Beyoncé

Kendall comes from a long line of wealth her sister Kim Kardashian started sKims, and sister Kylie started Kylie Cosmetics. Kim joined the Forbes billionaire list this year, and both sKims and Kylie Cosmetics have been valued at over $1 billion.

According to Hello Magazine, the Kardashian-Jenner’s have a combined property portfolio worth more than $200 million that figure on the rise.

Meanwhile, Kendall lives in Beverly Hills, in a home she bought from Charlie Sheen in 2017 for $8.5 million.

Her sister Kourtney has previously shared a look inside her living room, which has rose-colored sofas, a wooden coffee table and Marilyn Monroe artwork on the walls.

Kourtney has also shared a look inside Kendall’s pantry, which is filled with dried foods including cereals, flour and crackers, all of which are stored in labelled glass jars and containers on floor-to-ceiling shelving.