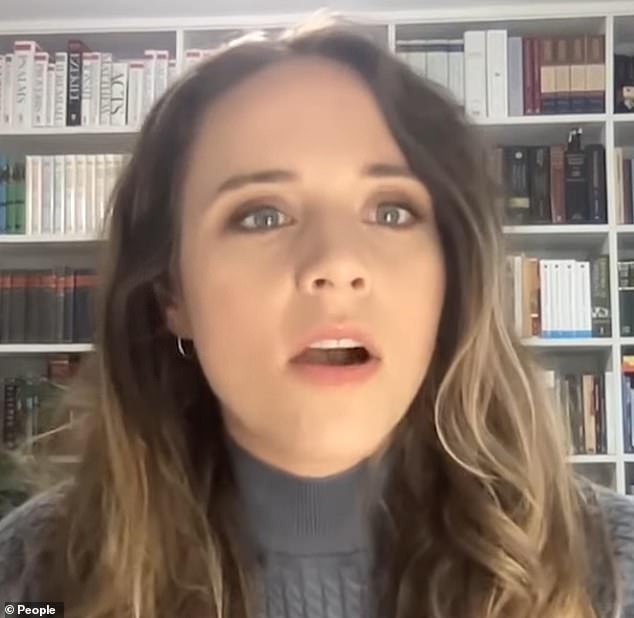 Jinger Duggar has spoken out to slam her ultra-religious parents’ ‘harmful’ beliefs – while comparing her famous family to a ‘cult’.

In a wide-ranging new interview, the 19 Kids and Counting star, 29, laid bare the lasting trauma of her incredibly-strict upbringing, revealing that she was left ‘crippled with anxiety’ and ‘terrified of the outside world’ as a result of the rigid ‘cult-like’ rules she was forced to follow as a child.

Speaking with People, Jinger said that the strict religious beliefs she grew up under were so severe that she was tempted at one point to abandon her faith altogether and ‘leave Jesus’.

Now, the former reality star says she has finally found ‘freedom’ from the ‘tangled’ web she grew up in – an experience that she recounts at length in her new book, Becoming Free Indeed.

The former TLC star was raised by her parents Jim Bob, 57, and Michelle Duggar, 56, who were both devout followers of the Institute in Basic Life Principles, which is denominational Christian organization that acts as an umbrella organization for other ministries and was established by shunned minister Bill Gothard. 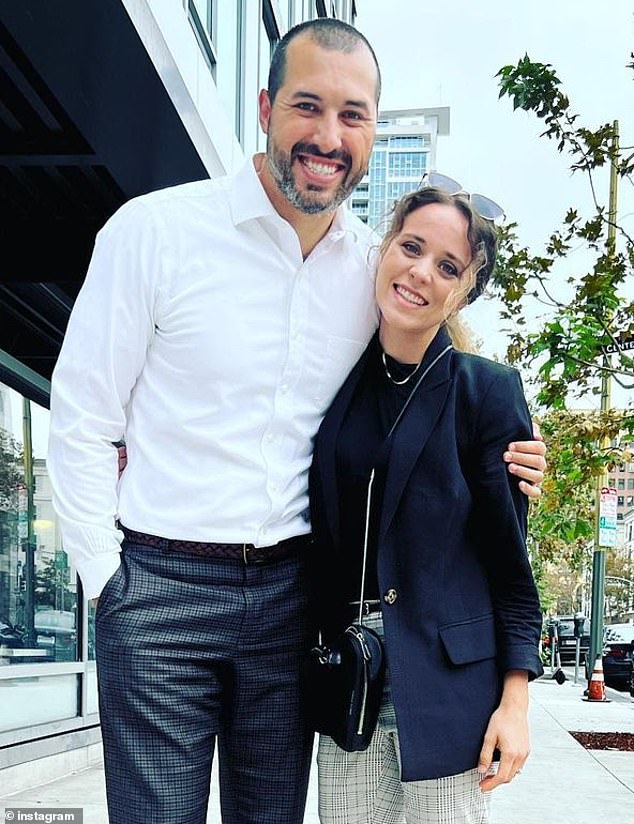 The 19 Kids and Counting star, 29, explained that the strict religious beliefs she grew up under ‘threatened’ her to ‘leave Jesus’ 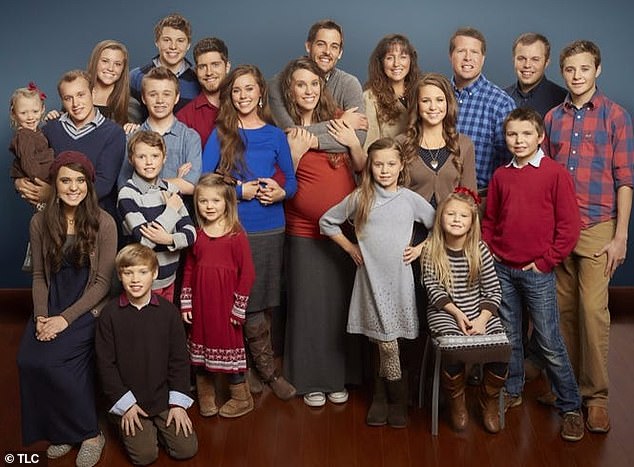 In an exclusive interview with People , Jinger spoke about her book Becoming Free Indeed and how she ‘detangled’ the web of ‘truth and error’ to ultimately ‘find freedom’

Jinger noted that Gothard’s teachings were ‘based on fear and superstition’ and left her questioning what God actually wanted from her – leading her to believe that she would be ‘harmed’ if she strayed from the rules or made a mistake.

The 29-year-old added that the strict directions included in the teachings – which see followers avoiding dancing, kissing, hugging, hand-holding, to name a few – left her ‘crippled with anxiety’ and ‘terrified of the outside world.’

Jinger explained that growing up under the rules that told her she had to wear a dress no matter the occasion and left her scared to make a mistake.

She revealed that when her and her family went to go play a sport, Jinger thought she would be ‘killed.’

‘I thought I could be killed in a car accident on the way, because I didn’t know if God wanted me to stay home and read my Bible instead,’ she told People.

She detailed a moment that she debated wearing something other than a dress but then remembered that God would be ‘so disappointed’ in her for disobeying the rules that he would bring ‘harm’ to her.

The reality TV star explained that modesty became a huge point of her life and she constantly lived in ‘fear’ because she wasn’t allowed to listen to certain types of music or even be friends with select people.

‘I thought I had to wear only skirts and dresses to please God. Music with drums, places I went or the wrong friendships could all bring harm,’ Jinger told People. 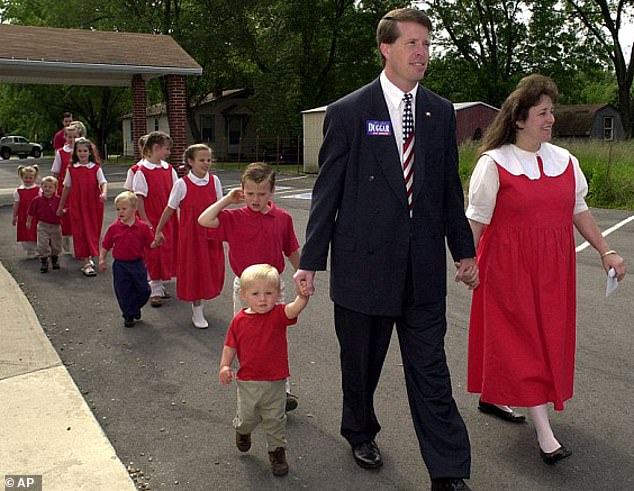 The 29-year-old noted that the rules that see followers avoiding dancing, kissing, hugging, hand-holding, and many other demands left her ‘crippled with anxiety’ 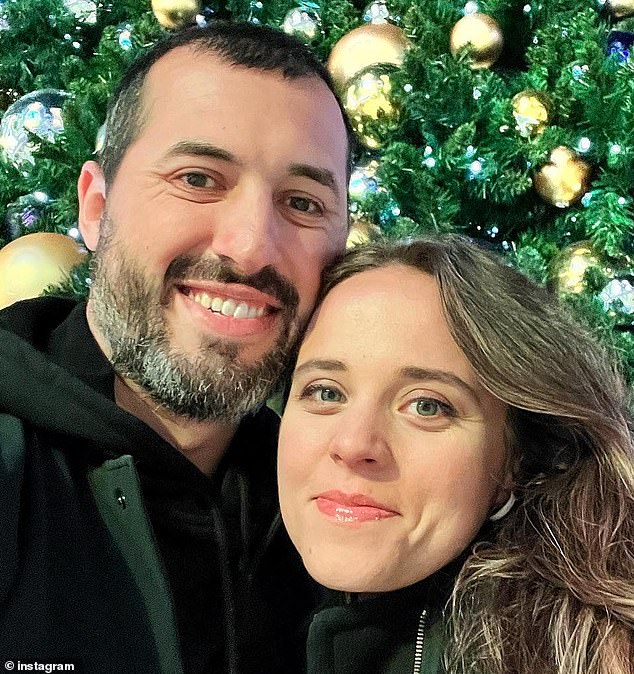 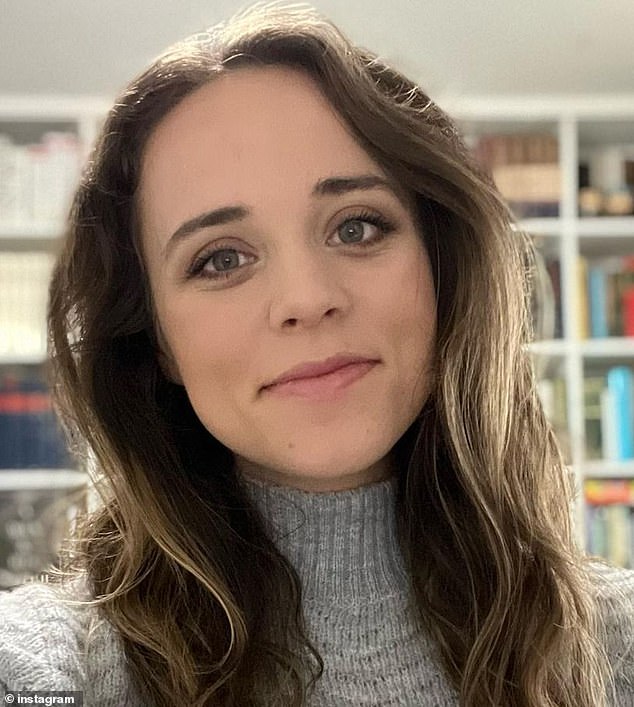 She revealed that when her and her family went to go play a sport, Jinger thought she would be ‘killed’ for not staying home and reading her bible

A ‘cult-like’ childhood: The strict beliefs Jinger had to follow growing up

‘There are a lot of cult-like tendencies,’ she added.

The 29-year-old hinted that her parents didn’t agree with her newfound freedom as she said that she ‘understands’ they are on their ‘journey’ and she is on hers and they can come to ‘different conclusions,’ after recounting the instance she told them she would be wearing pants.

Jinger – who is now married to Jeremy Vuolo – also touched on how her childhood affected her dating life.

Those who follow Gothard’s rules also stick by his seven phases of courtship, which include the man in the relationship being a ‘mature leader’ and ‘committed to Godliness,’ while the woman should be ‘grateful’ and ‘submit to her father.’

Jinger explained that growing up, she was taught to believe that those weren’t courting were setting themselves up ‘for a life of disaster.’

When Jeremy and Jinger began dating, the now 35-year-old appeared on 19 Kids and Counting and learned all of the rules to courting Jim Bob’s daughter.

Now, she looks back and ‘laughs’ because she was so ‘consumed’ by the idea that you should ‘have a chaperone, not hold hands and not kiss’ to have a successful love life.

The 29-year-old said that now she has re-examined her relationship with God and noted that she has had to come back to the bible for ‘every topic.’

She gave birth control as an example, noting that she once thought it was ‘so wrong,’ before adding that she ‘no longer sees it like that.’

Jinger also discussed her brother Josh Duggar, 34, who was arrested in April 2021 for possession of child pornography and also confessed to molesting his sisters.

Jinger noted that the whole situation regarding her brother was ‘so tough to talk about.’

‘It’s so heartbreaking to see the decisions my brother Josh has made and my heart just really breaks for the victims and their families and all that they have been through,’ she said.

‘I just pray that Josh will genuinely change one day and come to know Christ for who he is and repent,’ she said before adding that she is ‘always’ there for Josh’s wife, Anna, and his kids. 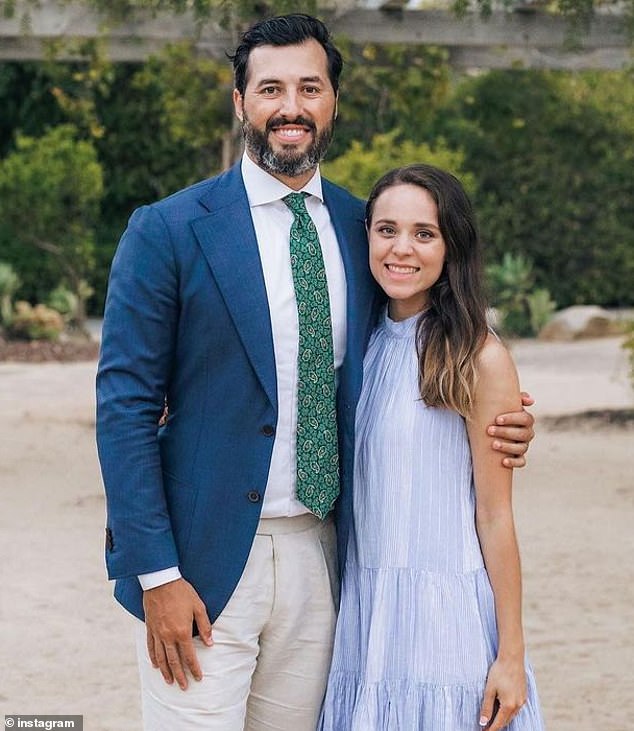 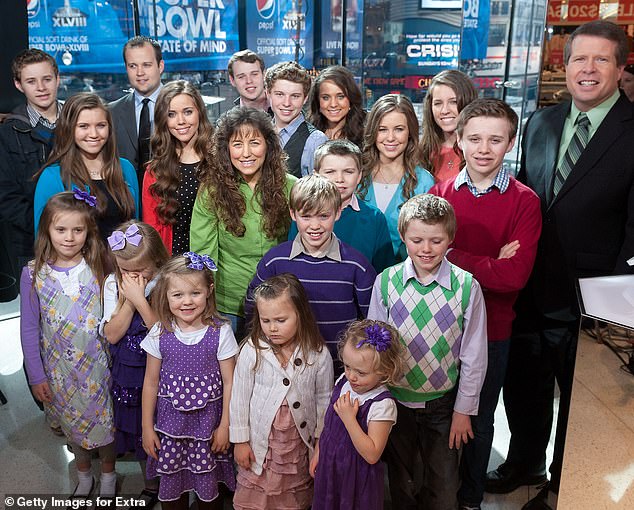 The 29-year-old said that now she has re-examined her relationship with God and noted that she has had to come back to the bible for ‘every topic.’ 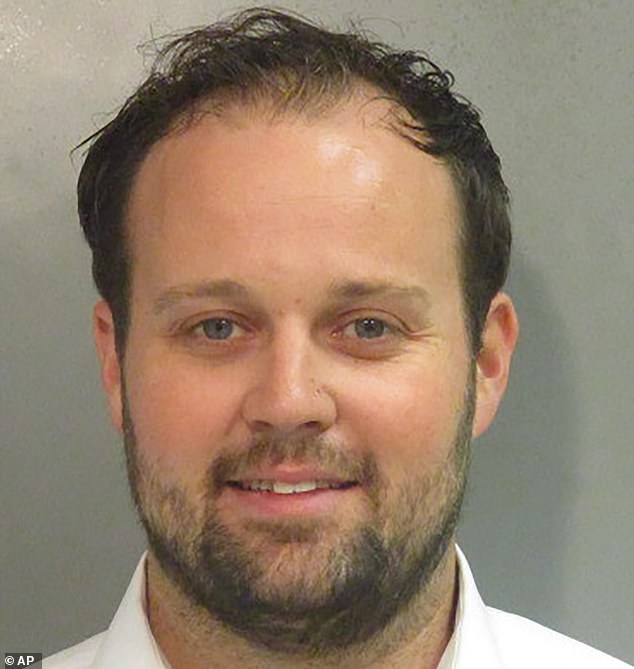 Jinger also discussed her brother Josh Duggar, 34, who was arrested in April 2021 for possession of child pornography and also confessed to molesting his sisters

According to a 2006 police report shared by InTouch Weekly in 2015, Josh’s behavior was first discovered in 2002, when one of his youngest sisters went to Jim Bob ‘very upset and crying.’

The sister explained that Josh had been sneaking into the shared girls’ bedroom and touching her breasts and genitals while she slept on four or five occasions.

Josh then admitted to doing so when he was confronted by Jim Bob, who said he would be ‘disciplined.’

The following year, in 2003, there was another incident where Josh was accused by several minors of similar sexual touching.

On one occasion, he was reading to a little sister on his lap and touched her ‘breasts and vaginal area. On another, he cornered one of his sisters in the laundry room and put his hand under her dress.

Instead of going to the police, Jim Bob sent Josh to a Christian program that consisted of ‘hard physical work and counseling from March 17, 2003 to July 17, 2003

Later, a tip was sent to the Arkansas State Police Child Abuse Hotline about Josh’s behavior. 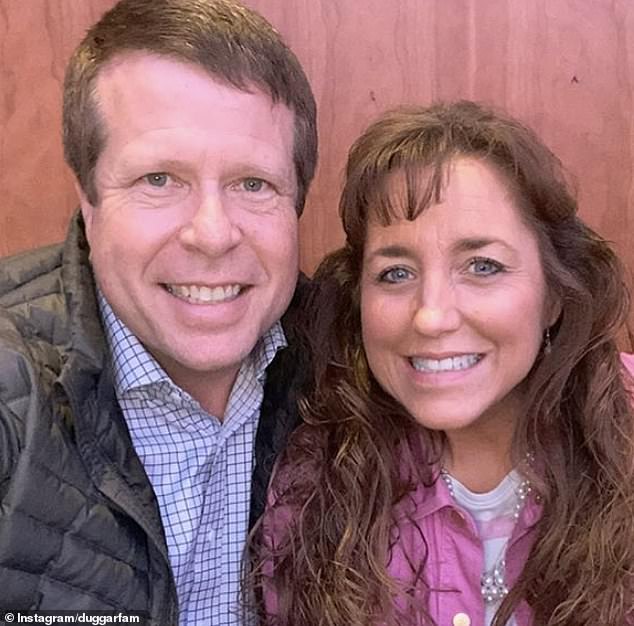 After learning he was molesting his sisters, Jim Bob and Michelle sent Josh for Christian counseling and didn’t talk to police about it until an anonymous tip forced their hand 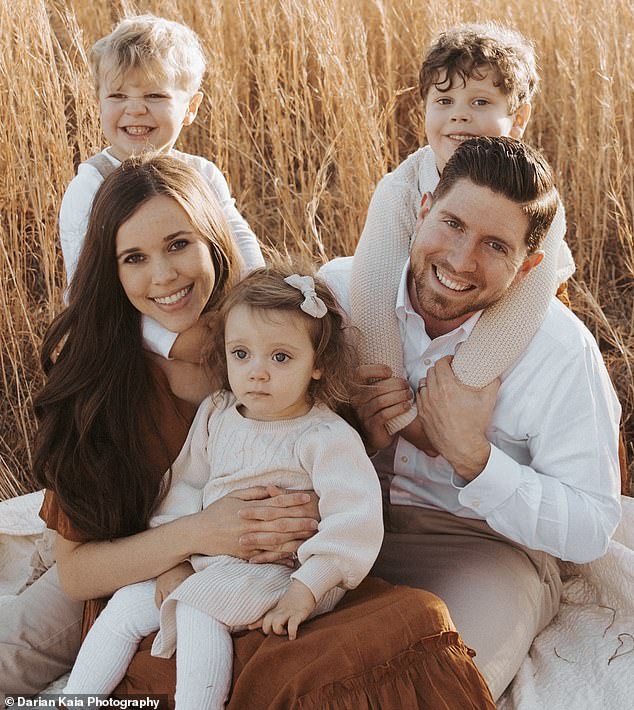 After a police report documenting the abuse was unearthed, his sister Jessa, 28, identified herself as one of his vitims 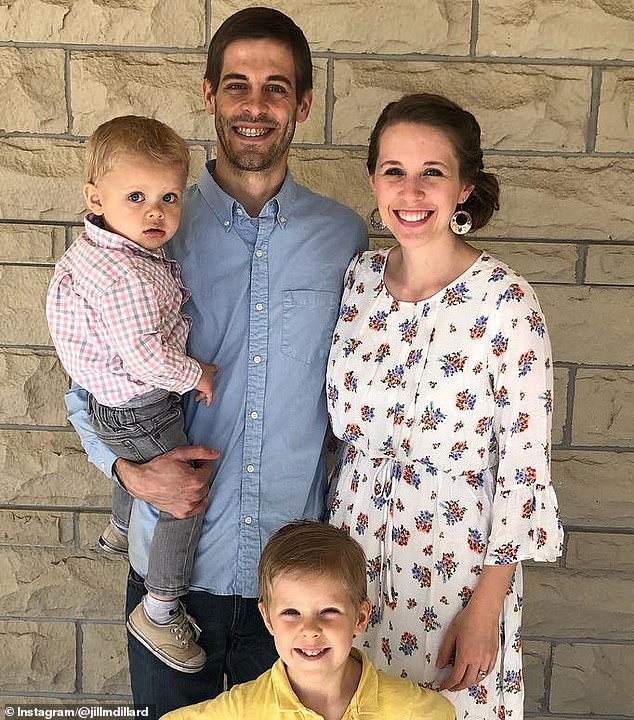 Jill also came out as one of Josh’s victims. Jim Bob and Michelle also told the local police that Josh had ‘apologized’ to his victims and said they had ‘forgiven’ him

When the police report describing Josh’s transgressions was made public in 2015, two of his sisters — Jill, 29, and Jessa, 28 — identified themselves as two of his victims. Later, in 2017, Jinger and Joy were identified as the other victims in a lawsuit.

Jim Bob, Michelle, Jill, and Jessa all sat down for an interview with Megyn Kelly to discuss the situations — and some viewers were left alarmed by the way the parents tried to minimize their son’s behavior.

‘He was still a kid, you know, and he was still a juvenile. He wasn’t an adult,’ Jim Bob said. ‘Kids will make their own choices.

He also seemed to imply that a brother molesting his sisters was common, saying: ‘We talked to other parents and different ones since then, a lot of families have said that they’ve had similar things happen in their families.’

Johnny Depp, 59, looks ready to party as he holds a red plastic cup