Missouri officials have declared a ‘large fatality event’ after a passenger train traveling from Los Angeles to Chicago hit a dump truck that was blocking a public crossing and completely derailed on Monday.

Three people are dead — including two on the train and one in the dump truck — after the train’s eight cars and its two locomotives came off the tracks, officials with the Missouri State Highway Patrol said.

At least 50 people were injured, the Chariton County Ambulance Service said. At least nine patients were being taken to a University of Missouri Health Care hospital in Columbia, Missouri, about 90 miles away, several of them arriving by helicopter.

State Highway Patrol Lt. Eric Brown said at a 5pm press conference there was still an ‘active and ongoing investigation at the scene’ but that all the injured had been transported to area hospitals.

The wreck occurred at 12.42pm CT Monday, when the Southwest Chief Train 4 collided with a truck that was obstructing a public crossing and came off the tracks near Mendon, Missouri, about 100 miles northeast of Kansas City, Amtrak confirmed to DailyMail.com.

The collision occurred at the uncontrolled Porch Prairie Avenue gravel road crossing, which has no electronic warning devices or gates, officials said.

Amtrak said in a statement that there were 243 passengers and 12 crew members aboard at the time of the crash. State troopers said the total number of people on the train may have been lower, but estimated that it was at least 200.

The federal National Transportation Safety Board is deploying a 14-member ‘go-team’ to the site of the derailment to investigate. NTSB Chair Jennifer L. Homendy will join to serve as the spokesperson on the scene, the agency said.

Transportation Secretary Pete Buttigieg said in a statement that he was ‘saddened by the tragic loss of life and injuries in the Missouri train derailment today,’ adding that Federal Railroad Administration staff would support the investigation.

Shocking photos taken in the immediate aftermath of the train wreck show a female passenger being helped out of a window, while others were seen atop overturned cars. 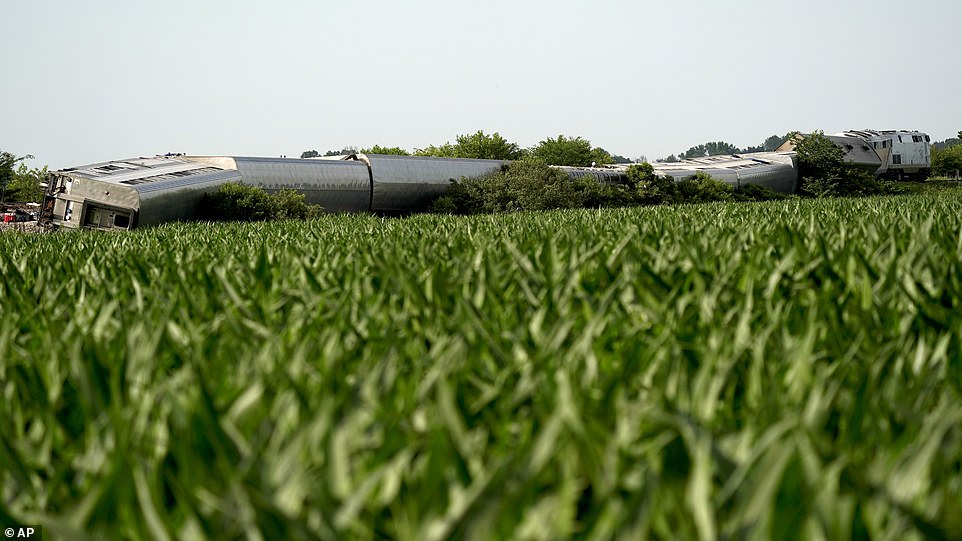 An Amtrak train which derailed after striking a dump truck is seen beyond a corn field Monday, near Mendon, Missouri 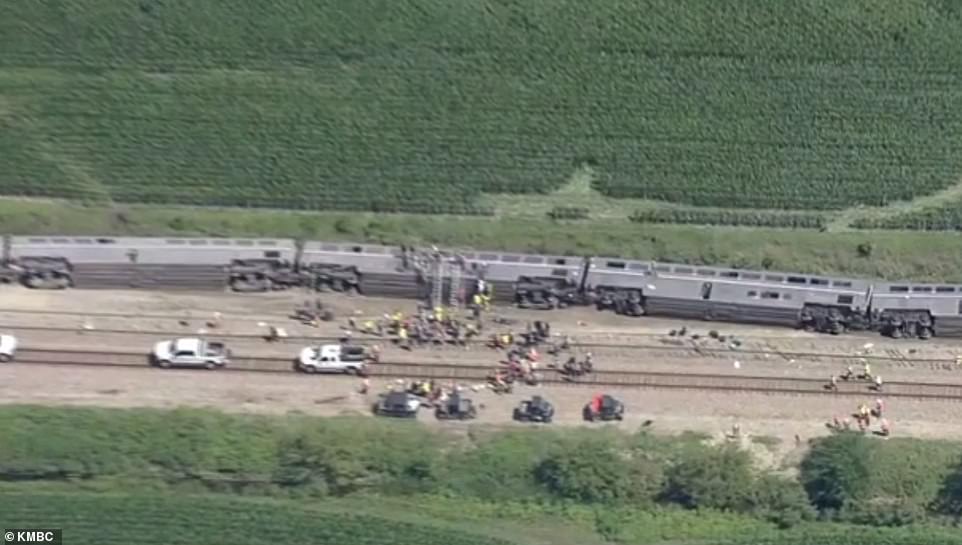 The Southwest Chief Train 4, which was traveling from Los Angeles to Chicago, collided with the truck that was obstructing the public crossing and came off the tracks at Mendon in Missouri around 12:42 p.m. CT Monday 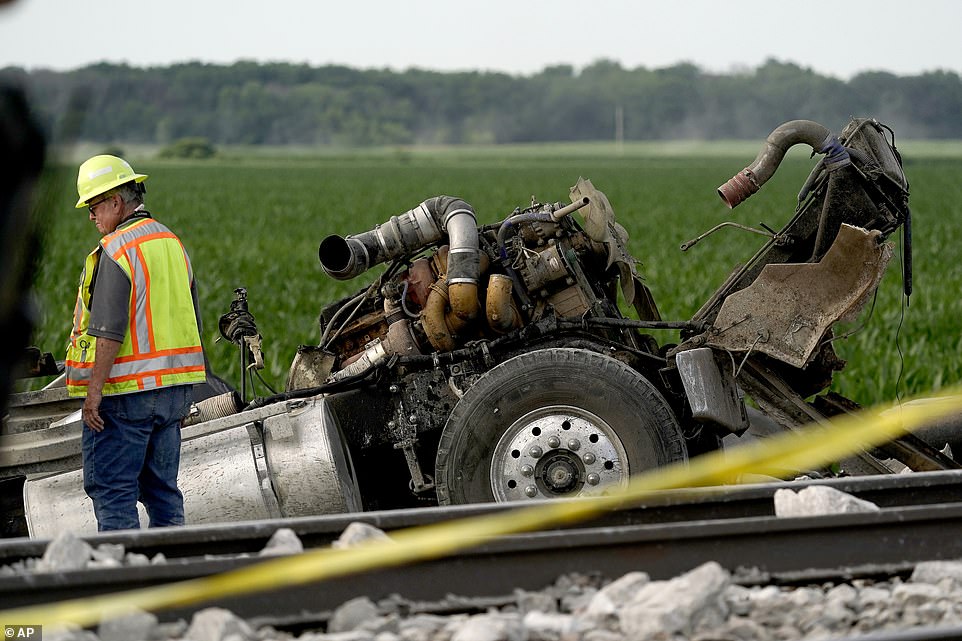 A worker looks over the decimated remnants of a dump truck that that was struck by an Amtrak train, causing it to derail 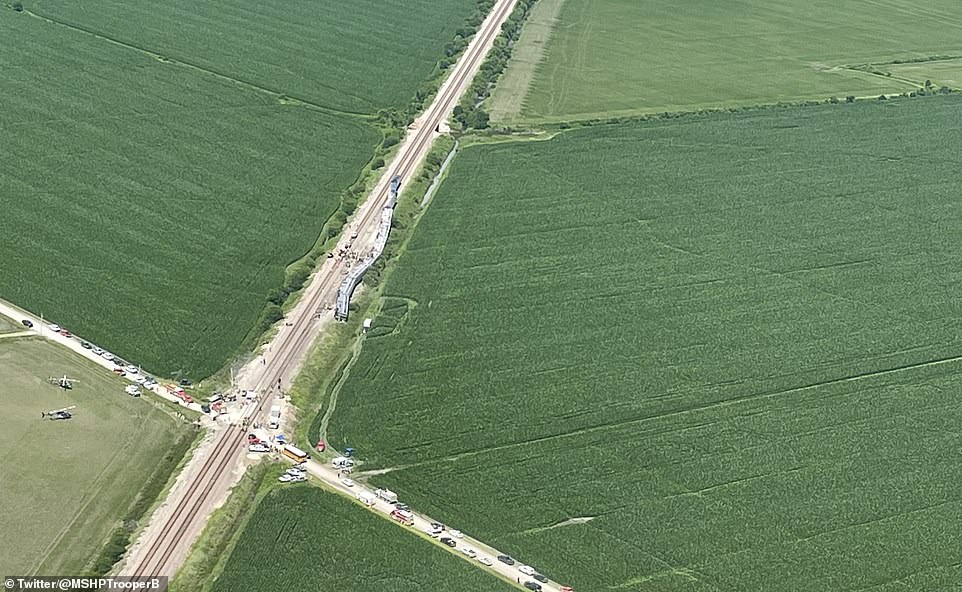 The derailment is seen in an aerial image. The federal National Transportation Safety Board is deploying a 14-member ‘go-team’ to the site of the derailment to investigate

The collision occurred at the uncontrolled Porch Prairie Avenue gravel road crossing, which has no electronic warning devices or gates, officials said

‘We ask Missourians to join us in praying for all those impacted,’ Missouri Governor Mike Parson said on Twitter.

‘The investigation is in its preliminary stages and as more information becomes available, we will be releasing it at that time,’ Corporal Justin Dunn, a spokesman for the Missouri State Highway Patrol, told reporters at a press conference.

‘There are multiple injuries and we can confirm there were three fatalities — two on the train and one in the dump truck,’ Dunn said.

Rob Nightengale, one of the train passengers, went live on Facebook shortly after the accident that sent at least eight of the train cars rolling onto their sides.

In the video, the train passengers’ world is turned upside down and they are seen trying to prop themselves awkwardly against the side of the toppled over train car, while trying to avoid stepping on glass from the shattered windows.

Nightengale spoke to CNN in a phone interview and said that those in the dining car and observation deck had the hardest time getting to safety. 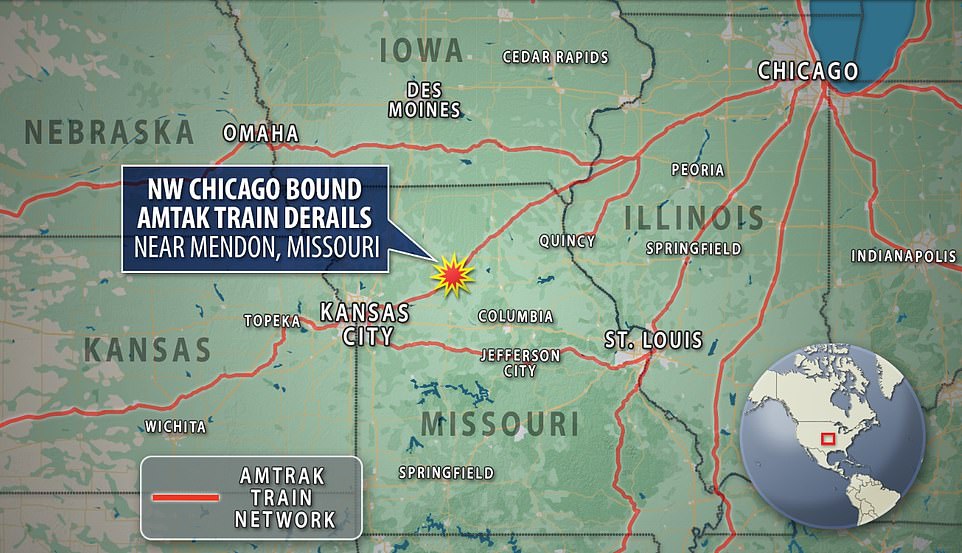 The Amtrak train was traveling from Los Angeles to Chicago when it collided with a dump truck at a public crossing in Mendon, Missouri and derailed from the tracks. Mendon is about 100 miles northeast of Kansas City, Missouri 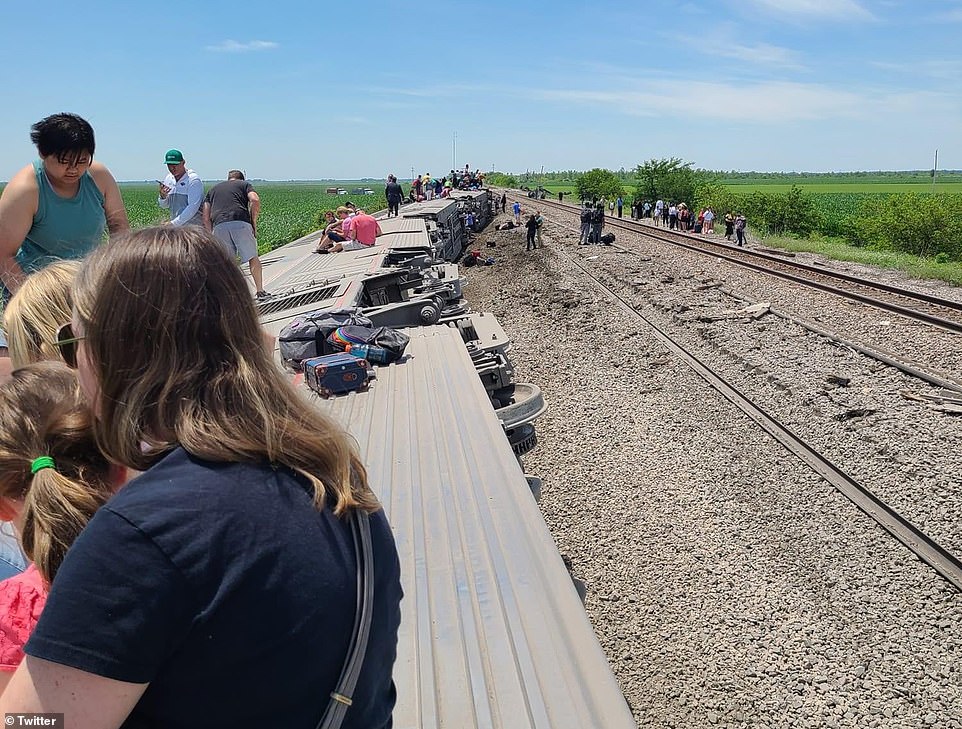 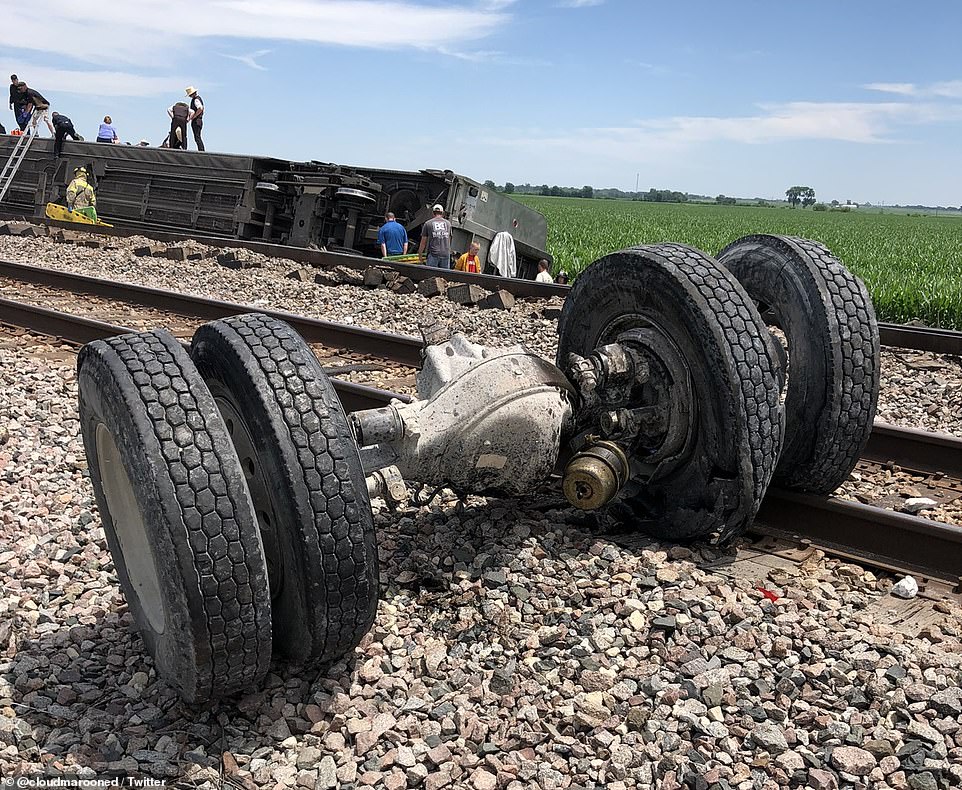 A broken truck axle was photographed close to the track in the aftermath. It’s still unclear why the truck was in the crossing 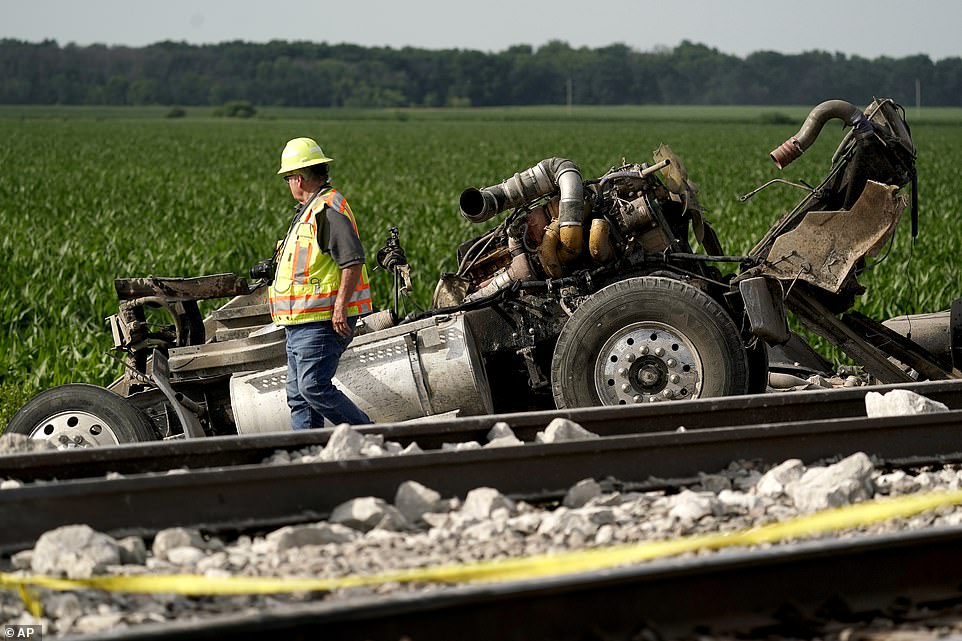 One person in the dump truck, presumed to be the driver, was killed in the collision. The truck’s chassis is seen above 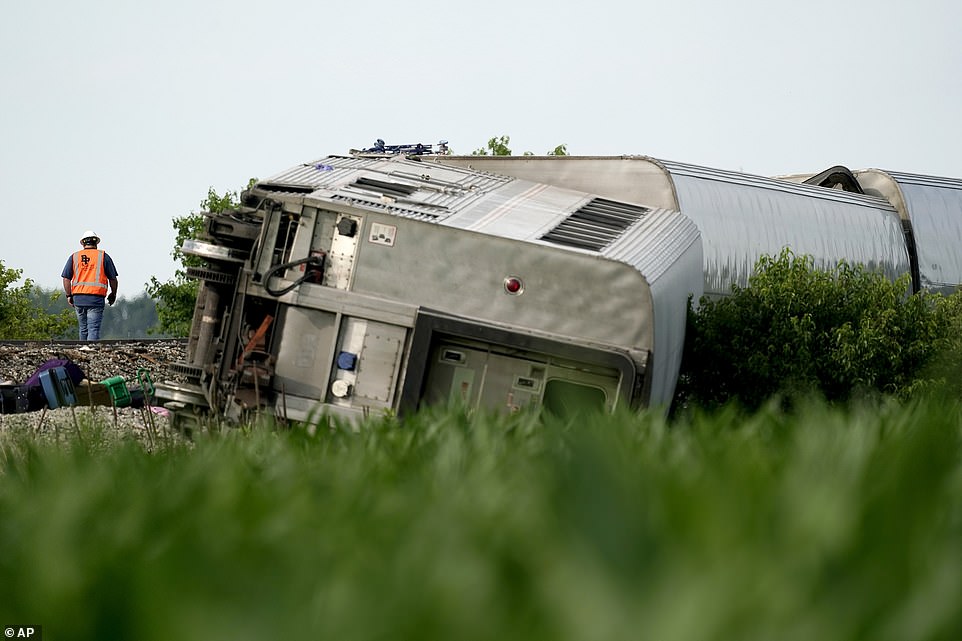 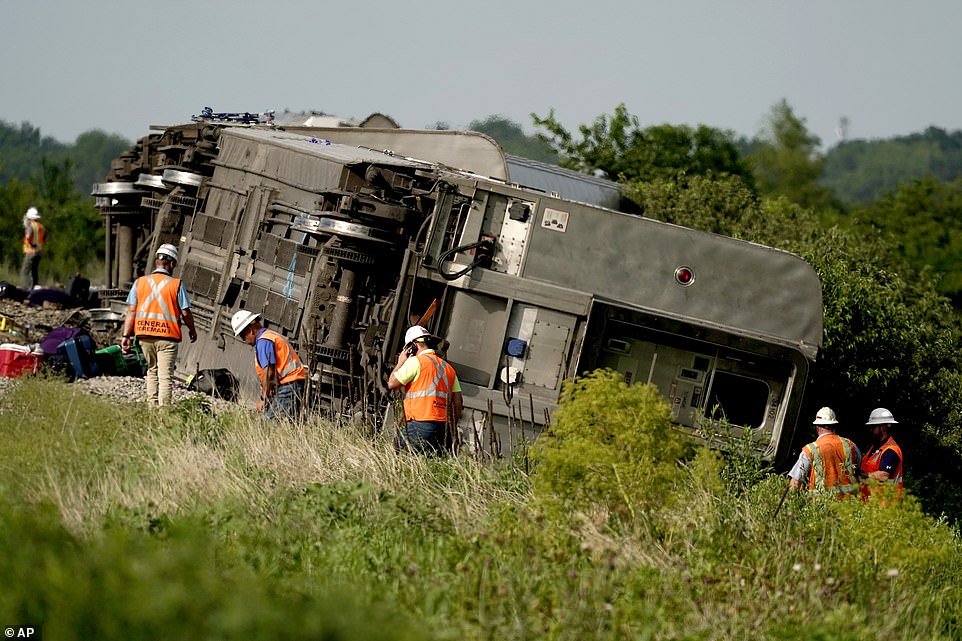 He said he had been dozing off in his car when the train derailed. ‘I could feel the tracks go back and forth, back and forth, and then it started to go, to tumble on my side of the road,’ he said.

Another passenger tweeted several images of the derailment, then posted that the survivors had taken refuge at a local high school in Mendon, Missouri.

‘So thankful for the people here, safely at the Northwestern high school near Mendon,’ Dax McDonald tweeted. ‘This town pulled together to help everyone.’

The Southwest Chief takes about two days to travel from Los Angeles to Chicago. Mendon, with a population of about 160, is about 84 miles northeast of Kansas City. 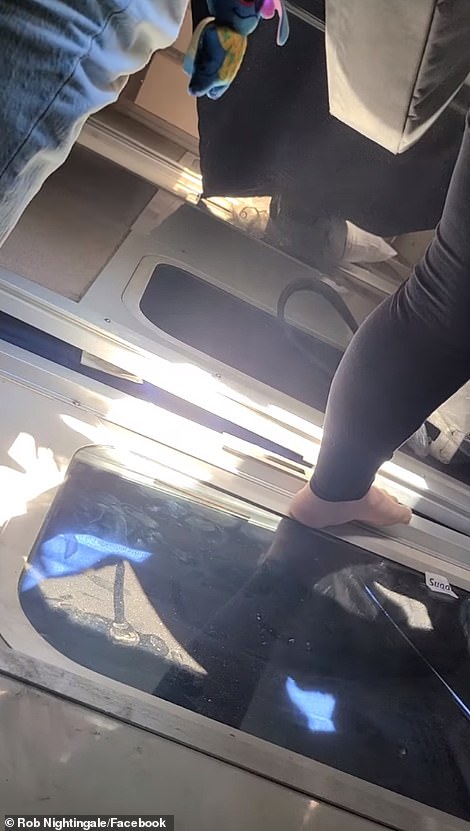 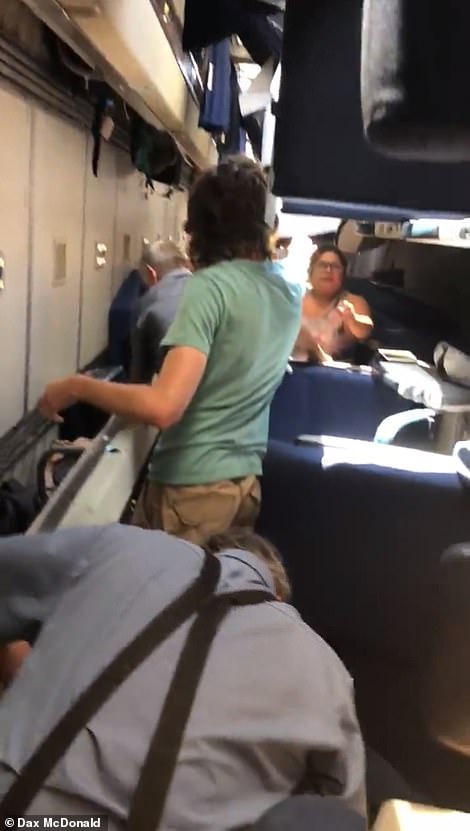 Rob Nightengale, one of the train passengers, went live on Facebook, showing the aftermath of the accident as the passengers awkwardly prop themselves against the side of the toppled over train car, and avoid stepping on glass 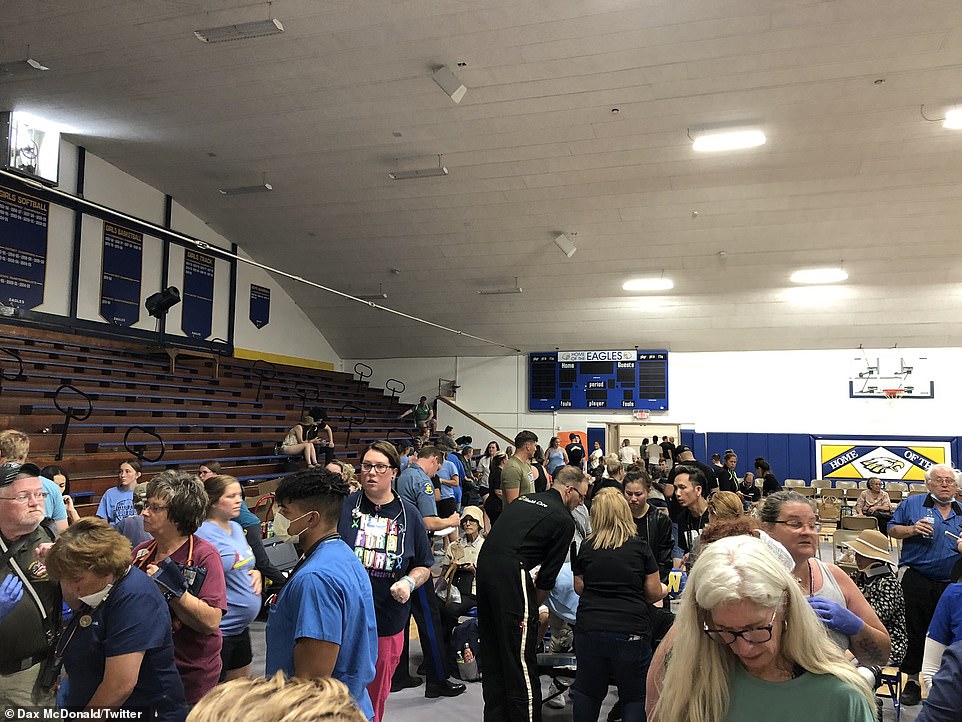 One passenger tweeted that the survivors (above) took refuge at a local high school in Mendon, Missouri, writing: ‘So thankful for the people here, safely at the Northwestern high school near Mendon. This town pulled together to help everyone’

Journalist Nylah Burton, who was on a separate Amtrak train set to depart Albuquerque, says she was informed of the possible deaths and injuries by a staff member who came into her car to announce a delay caused by the incident.

She tweeted: ‘An @Amtrak train just derailed in Kansas City (there are likely fatalities but they don’t know all the details) so I’m stuck in Albuquerque tonight because the train can’t go any further.’

Amtrak confirmed to DailyMail.com that multiple injuries were reported, but no additional details were released.

Amtrak tweeted that the Southwest Chief Train 3, which was scheduled to depart Chicago, has been canceled.

Individuals with questions about their friends and family who were traveling aboard the derailed train should call 1-800-523-9101. 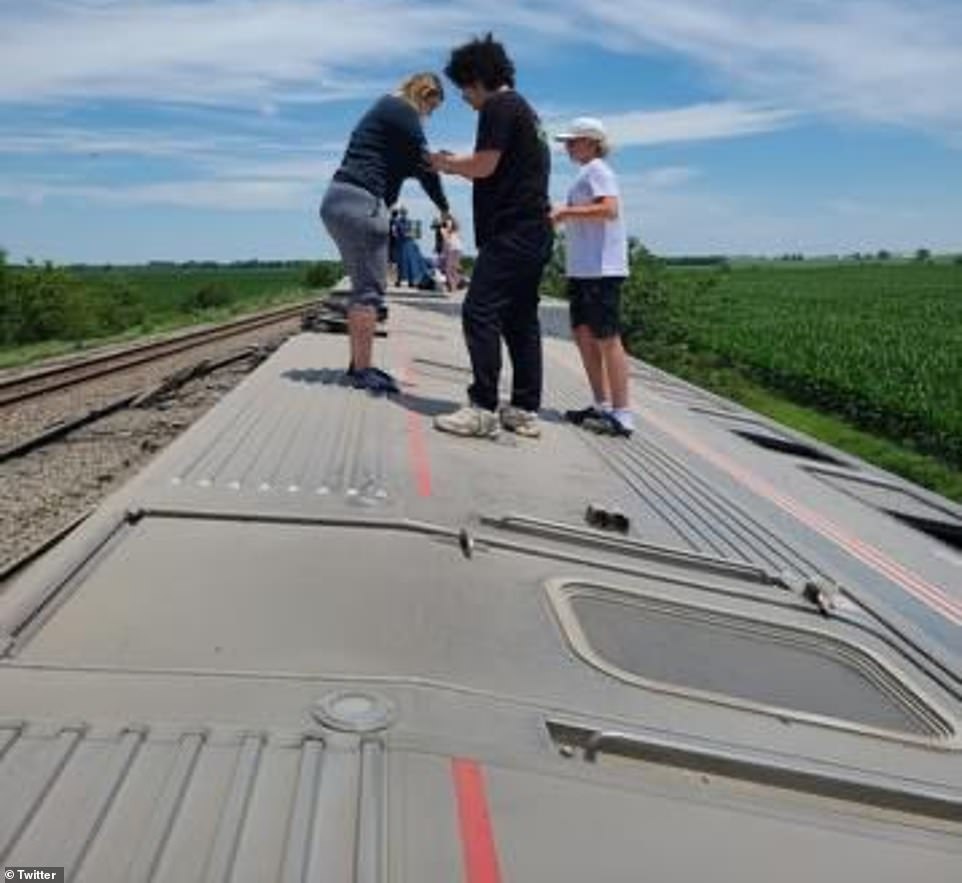 The derailment comes one day after another Amtrak train collided with a car at a crossing in Brentwood, California, on Sunday afternoon, killing three women, and injuring several others.

Three women, all over the age of 50, were pronounced dead at the scene in Sunday’s crash, according to The Mercury News.

Authorities say the car pulled into a long rural dirt driveway near the intersection of Orwood Road and Bixler Road around 1pm when the Amtrak train rammed into it.

The car then careened off the road and hit another vehicle.

A child and two men were also hospitalized with serious injuries, and another person suffered from moderate injuries.

In total, a spokeswoman for BNSF Railway told the New York Times there were ‘approximately’ five people injured, though the number remains in dispute. 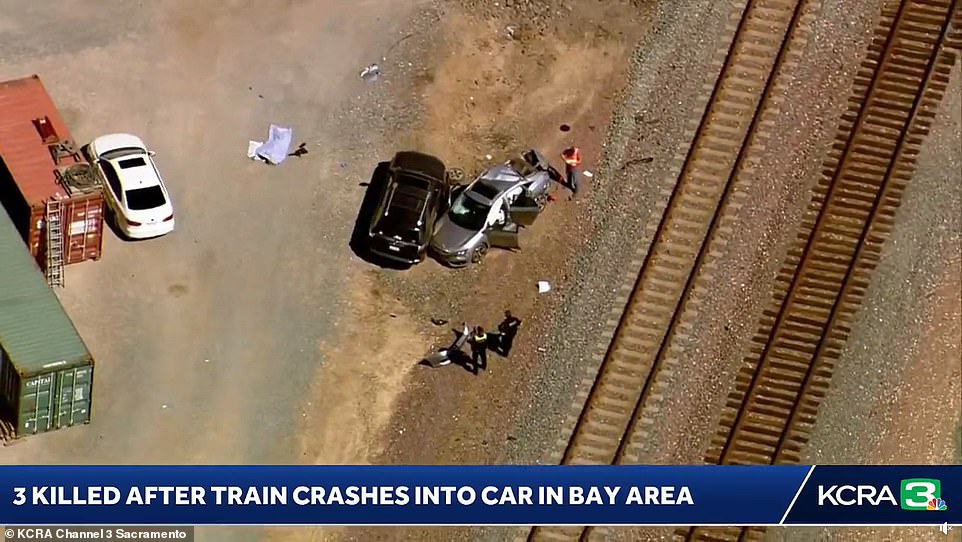 On Sunday (above), three women were killed and four others were injured in a separate crash when an Amtrak train slammed into a car at around 1pm in Brentwood, California. 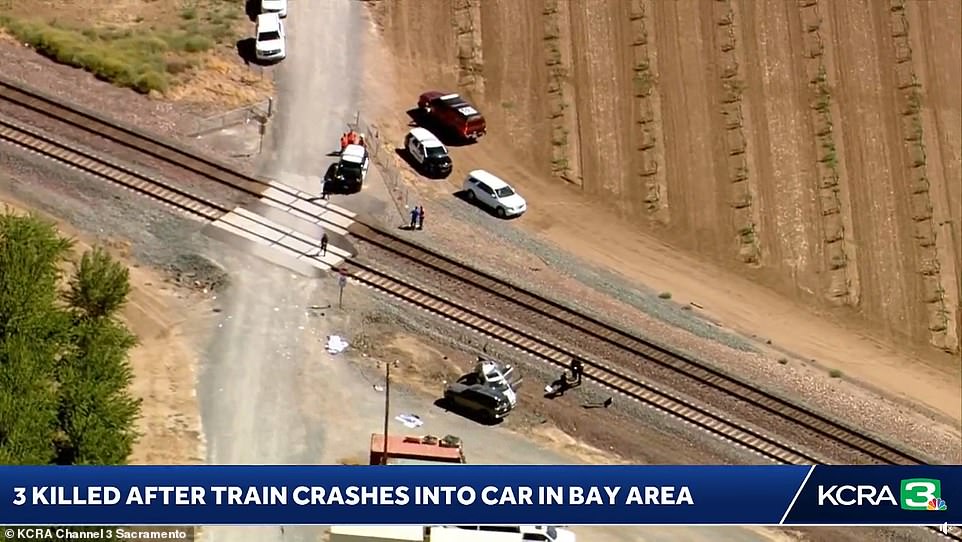 Those who who were seriously wounded were rushed to the John Muir Medical Center after the crash on Sunday afternoon, according to ABC News. One of the adults was airlifted and the child was transported by the ground, the San Francisco Chronicle reports.

The victims were all inside the four-door sedan when it was struck, officials say, and Battalion Chief Craig Auzenne, of the East Contra Costa Fire Protection District, told reporters at the scene that none of the 81 passenger or five crew members on board the train were injured.

In fact, he said, the train came to a stop about a quarter-mile from where the sedan slammed into an SUV.

An investigation into the crash is ongoing.

But East Contra Costa Fire Department officials say they’d already been called out to that train crossing twice last year because it does not have a traffic guard.

‘It’s a bad crossing,’ Steve Aubert, a fire marshal said, noting that trains travel at about 80mph on the tracks.

Other Amtrak derailments and crashes in recent years

An Amtrak passenger train struck a dump truck Monday at an uncontrolled crossing in a rural area of Missouri killing two people on the train and one in the truck. Others were injured. The crash happened just after noon near Mendon, Missouri. Several cars derailed. The train was traveling from Los Angeles to Chicago.

The crash came a day after three people were killed when an Amtrak train smashed into a car in California killing three people in the vehicle.

Here’s a look at other recent Amtrak accidents:

June 26, 2022: Three people in a car were killed when an Amtrak commuter train smashed into their vehicle in Northern California. No one in the train was injured.

Sept. 26, 2021: Three people died and others were injured when an Amtrak derailed in north-central Montana as it traveled from Chicago to Seattle. 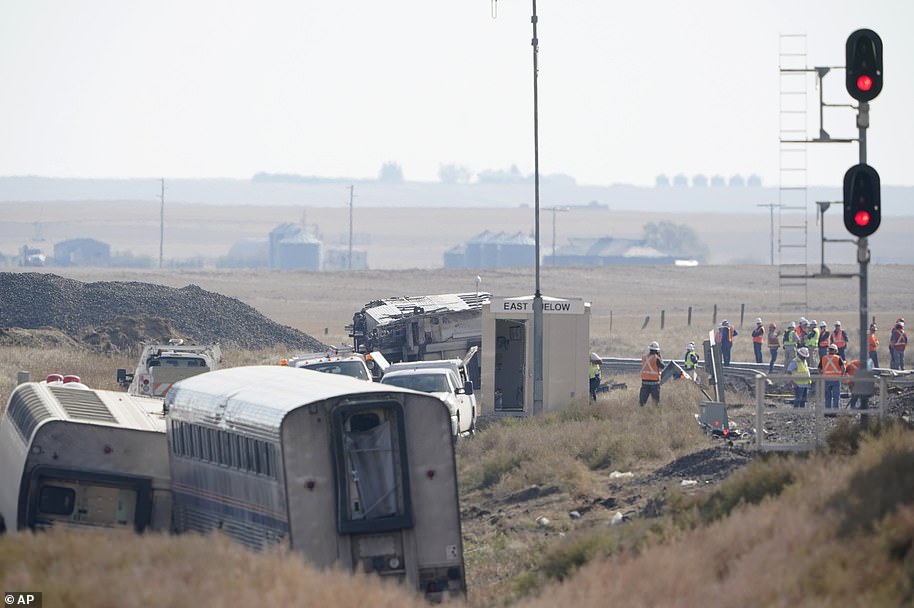 September 2021: Three people died and others were injured when an Amtrak derailed in north-central Montana as it traveled from Chicago to Seattle

Dec. 18, 2017: Three people were killed and 10 seriously injured in a derailment near Olympia, Washington, in which part of the train landed on Interstate 5. The train was traveling more than 80 mph during its inaugural run of a newly opened, faster rail line when it left the tracks.

April 3, 2016: Two maintenance workers were struck and killed by train going more than 100 mph in Chester, Pennsylvania. The lead engine of the train derailed.

March 14, 2016: A train traveling from Los Angeles to Chicago derailed in southwest Kansas, injuring at least 32 people. Investigators concluded a cattle feed delivery truck hit the track and shifted it at least a foot before the derailment.

Oct. 5, 2015: A train headed from Vermont to Washington, D.C., derailed when it hit rocks that had fallen onto the track from a ledge. Seven people were injured.

May 12, 2015: A train traveling at twice the 50 mph speed limit derailed as it entered a sharp curve in Philadelphia. Eight people were killed and more than 200 were injured.

Teenage boy dives into a New York bay to save woman who drove her...

‘We’ve not seen the WORST of Covid’: Bill Gates warns of the risk for...