Elon Musk said he has not yet made a decision to reinstate Donald Trump on Twitter despite allowing Kathy Griffin, Jordan Peterson and The Babylon Bee back on the social media platform.

The Chief Twit, who dubbed today ‘Freedom Friday,’ announced that Griffin, who had called him an ‘a******,’ would be reinstated on the social media after she was suspended for impersonating him on Twitter last week.

Also back was conservative author and psychologist Dr. Peterson, who was suspended from the platform after saying transgender star Elliot Page had his breasts removed by a ‘criminal physician.’

The Babylon Bee – which had its account restricted in march for naming U.S. assistant secretary for health Rachel Levine, a transgender woman, ‘Man of the Year’ –  got full access to its account as well.

Musk has widely criticized Twitter’s suspension policies and following his $44 billion takeover, vowed to bring back prominent figures – like Donald Trump, who was booted from the platform for statements following the January 6 Capitol riot.

The CEO’s latest announcement comes as the company lost 1,200 staffers who refused Musk’s ultimatum to adhere to a new ‘hardcore’ work environment or resign.

Elon Musk said the accounts for comedian Kathy Griffin, Dr. Jordan Peterson & The Babylon Bee satire site have been restored. However, no decision has been made yet on Donald Trump

Musk added that Twitter will be a free speech platform, but that hate tweets will be demonetized and not seen by many 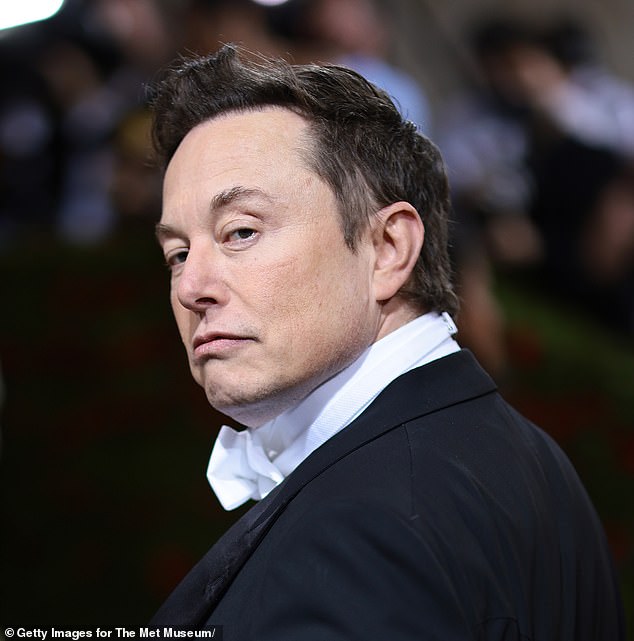 The CEO’s latest announcement comes as the company lost 1,200 staffers who refused Musk’s ultimatum to adhere to a new ‘hardcore’ work environment or resign 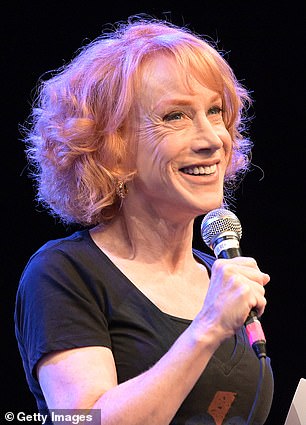 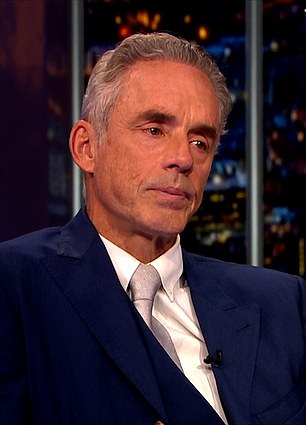 Along with reinstating the three accounts, Musk, who describes himself as a champion of free-speech, outlined the companies latest policy regarding that very issue.

‘New Twitter policy is freedom of speech, but not freedom of reach,’ Musk tweeted. Negative/hate tweets will be max deboosted & demonetized, so no ads or other revenue to Twitter.

‘You won’t find the tweet unless you specifically seek it out, which is no different from rest of Internet.’

Following his reinstatement, Peterson tweeted a picture of Jack Nicholson from The Shining, writing: I’m back. Thanks @elonmusk.’

‘We’re back. Let that sink in,’ the site tweeted, referencing Musk’s remarks after his Twitter acquisition. 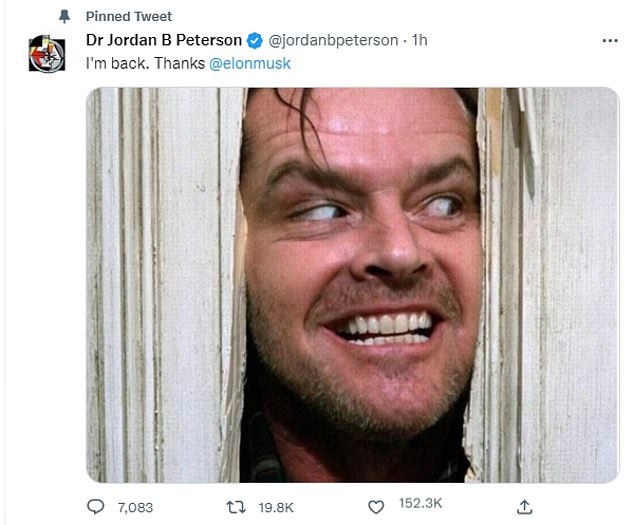 In response, Griffin then went off on Musk from her late mother’s account Sunday night, calling him an ‘a**hole’ for joking that she’d been ‘suspended for impersonating a comedian’

Along with Trump, the big names booted from Twitter include Roger Stone, Alex Jones, Steve Bannon and US Rep. Marjorie Taylor Greene.

Stone has said he wants to come back after being banned in 2017 for attacking a journalist.

He was briefly back on Twitter in April using an alternate account as he said he was ‘anxious to see how strong Elon Musk’s commitment to free speech is.’

Steve Bannon is another former Trump adviser looking to return to the platform after being kicked out in 2020. 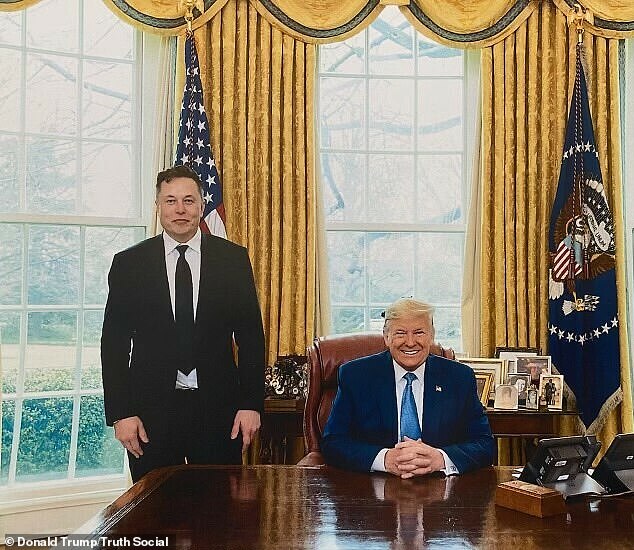 Musk is expected to bring back the Twitter account of former President Donald Trump after he was kicked off the site for posts made after the January 6 Capitol riot. The two are pictured here at the Oval Office of the White House

In his statement, Trump both welcomed Musk’s arrival at Twitter while trying to boost the fortunes of his own social media 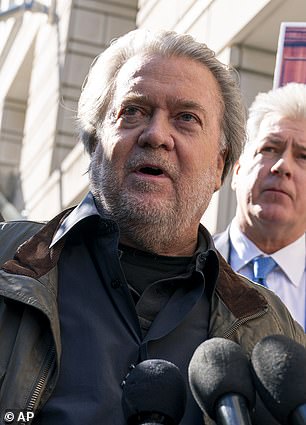 Among those expected to be brought back to Twitter under Musk include former Trump advisers Roger Stone (left) and Steve Bannon (right), who were booted from the platform in 2017 and 2020, respectively

One of the more controversial figures to be booted from the platform is InfoWars host Alex Jones, who was ordered to pay $95 million in damages over false claims that the Sandy Hook Elementary School shooting was a hoax.

Families of the victims branded Jones a conspiracy theorist whose claims have caused years of harassment and even death threats from his believers.

The congresswoman had received multiple warnings before her account was pulled.

Also banned on Twitter are David Duke, the former grand wizard of the Ku Klux Klan, as well as Milo Yiannopoulous, who was accused of stirring abuse toward Ghostbusters actress Leslie Jones.

Trump has said that he has no intention of returning to Twitter after he created his own social media site, Truth Social.

As chaos befell the sight over rumors that it was shutting down over the mass exodus, Musk tweeted: ‘What should Twitter do next?’

Musk sent an email to his remaining 3,700 workers on Wednesday and gave them a 5pm ET Thursday deadline to either click a link confirming their willingness to work ‘long hours at high intensity’, or leave the company with three months severance pay.

Although it remains unclear exactly how many have confirmed their resignation, Fortune estimates between 1,000 to 1,200 employees have resigned so far, with Musk demanding all remaining coders show up to Twitter’s San Francisco HQ on Friday.

On Twitter, Musk appeared unfazed by the mass resignations, claiming the site just ‘hit another all-time high’ in usage. ‘Let that sink in.’

As chaos befell the sight over rumors that it was shutting down over the mass exodus, Musk added: ‘What should Twitter do next?’ 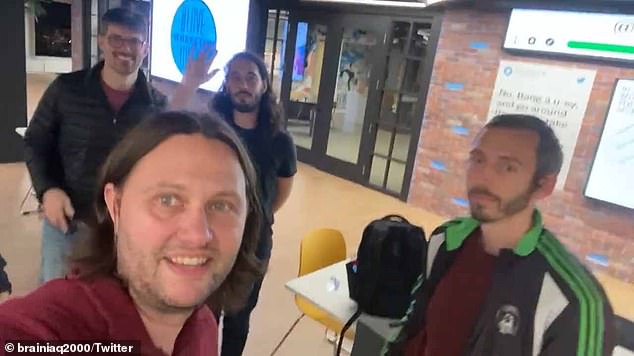 Matthew Miller (bottom left), shared a viral video of himself and coworkers counting down the moment they no longer worked for the company following Musk’s deadline 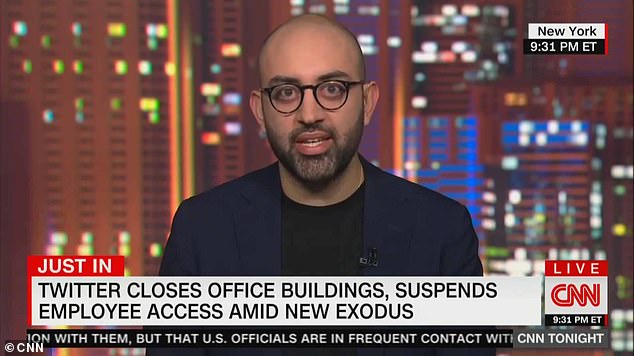 Many shared their departures on social media, including a viral video from Boston as workers counted down their last seconds at Twitter.

Matthew Miller, whose LinkedIn profile states he’s worked as a Twitter engineer for 9 years, shared the video of himself and co-workers counting down the moment they no longer worked for the company following Musk’s deadline.

Following the deadline, A former Twitter executive who recently left the company told CNN’s Oliver Darcy that: ‘Elon is finding out that he can’t bully top senior talent. They have lots of options and won’t put up with his antics.

‘[Twitter] will struggle just to keep the lights on.’

Lisa Rinna flips off the crowd as she is BOOED at BravoCon following backlash...

Western Australia housing industry proposes $20,000 worth of incentives to lure tradies to the...