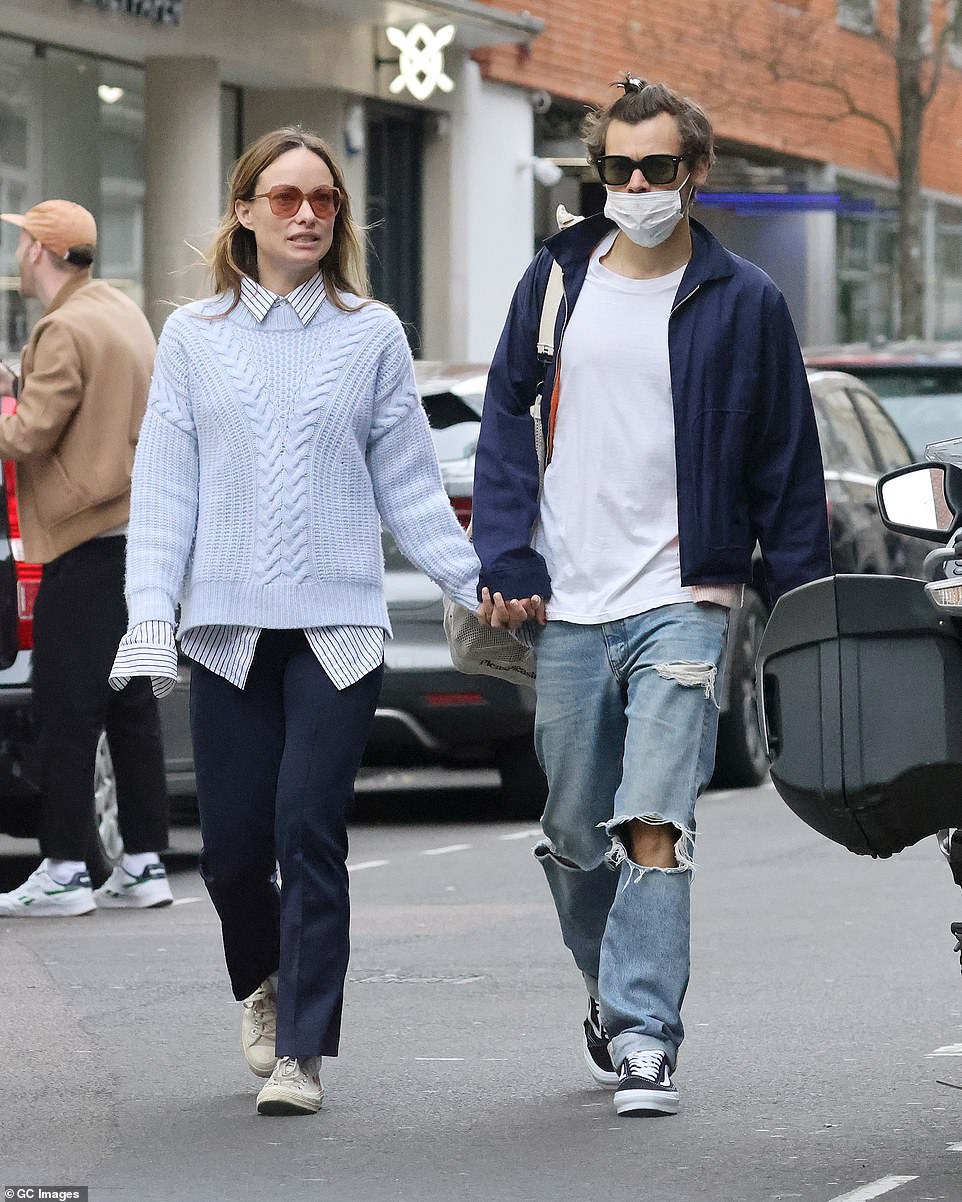 Harry Styles and Olivia Wilde have split after two years, according to a new report.

People Magazine claims the singer, 28, and actress, 38. are ‘taking a break’ from their romance after nearly two years due to having  ‘different priorities that are keeping them apart’.

A source said: ‘He’s still touring and is now going abroad. She is focusing on her kids and her work in LA. It’s a very amicable decision. They’re still very close friends.

A friend added to the publication: ‘Right now, they have different priorities that are keeping them apart. The public pressure on them has been difficult. They’ve had ups and downs throughout the relationship.’

Over: Harry Styles and Olivia Wilde have split after two years, according to a new report (pictured March)

DailyMail.com has contacted representatives for the pair for comment.

Just before the split news broke a smiling Olivia was seen leaving a gym in Studio City, LA on Friday, clad in a Ghostbusters tee.

The star looked in great spirits as she walked down the street, amid her painful break-up. Olivia was last seen supporting Harry when she attended his November 15 concert at LA’s Kia Forum, where she was accompanied by her two children 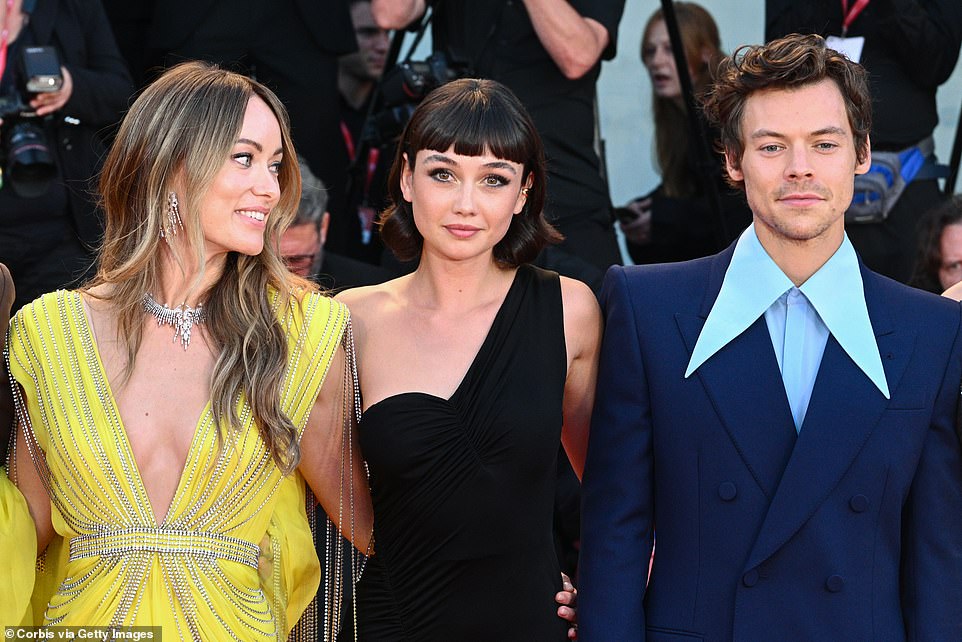 Happier times: People Magazine claims the singer, 28, and actress, 38. are ‘taking a break’ from their romance after nearly two years due to having ‘different priorities that are keeping them apart’ (pictured September with Sydney Chandler) 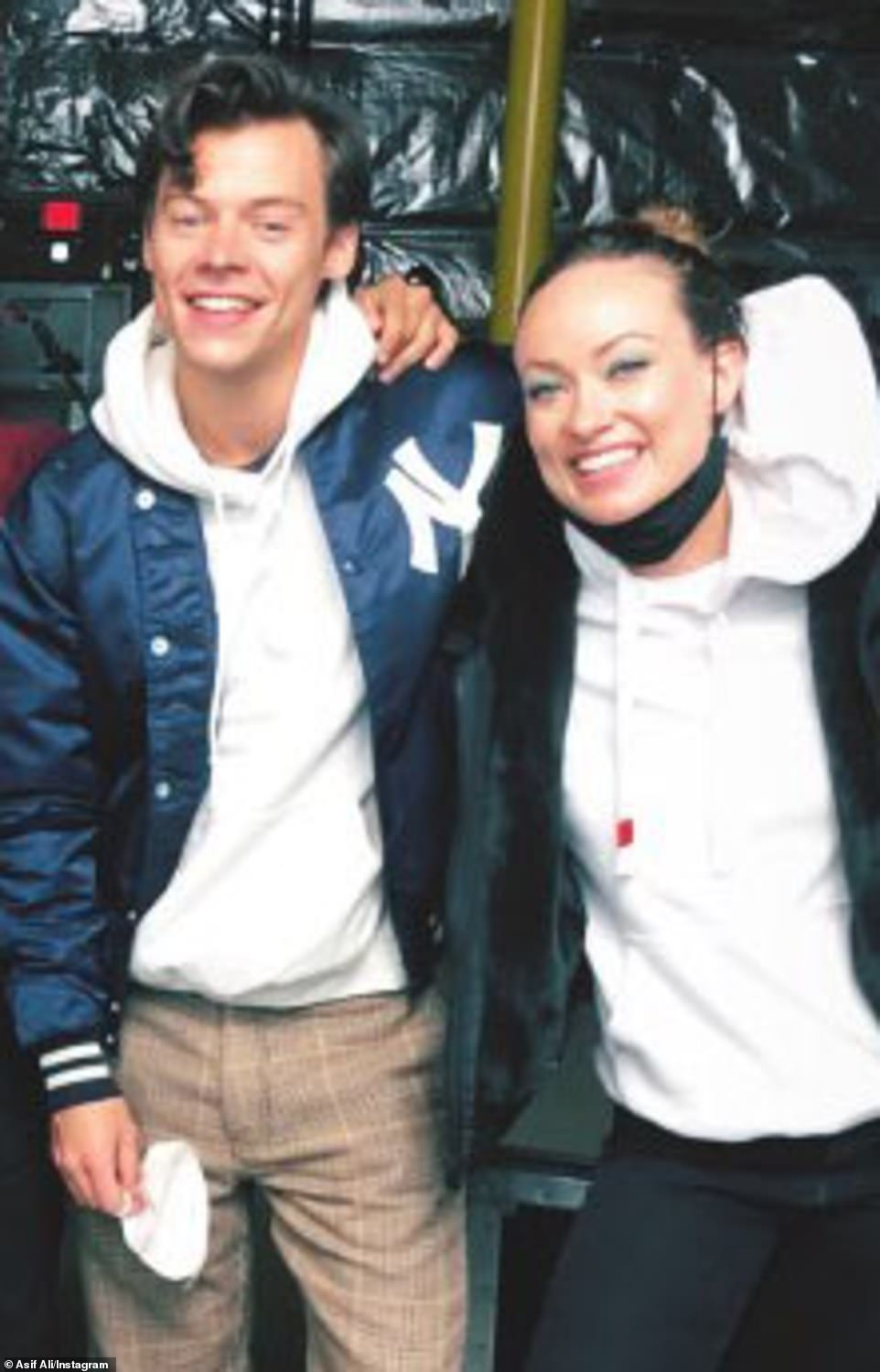 First sighting: Olivia put on a brave face as she was seen heading home from the gym in Studio City on Friday – as the split news broke

The singer who made his acting debut in 2017 film Dunkirk, signed onto Olivia’s film after impressing both director Olivia and star Florence.

After ‘growing close’ to each other on the set of Don’t Worry Darling, the Hollywood actress was pictured arriving at the former One Direction heartthrob’s LA home with her luggage in hand in January and the two were seen driving around California together in January 2021.

The pair then made their public debut when they were spotted holding hands at Harry’s agent’s wedding at the San Ysidro Ranch in Montecito, California. 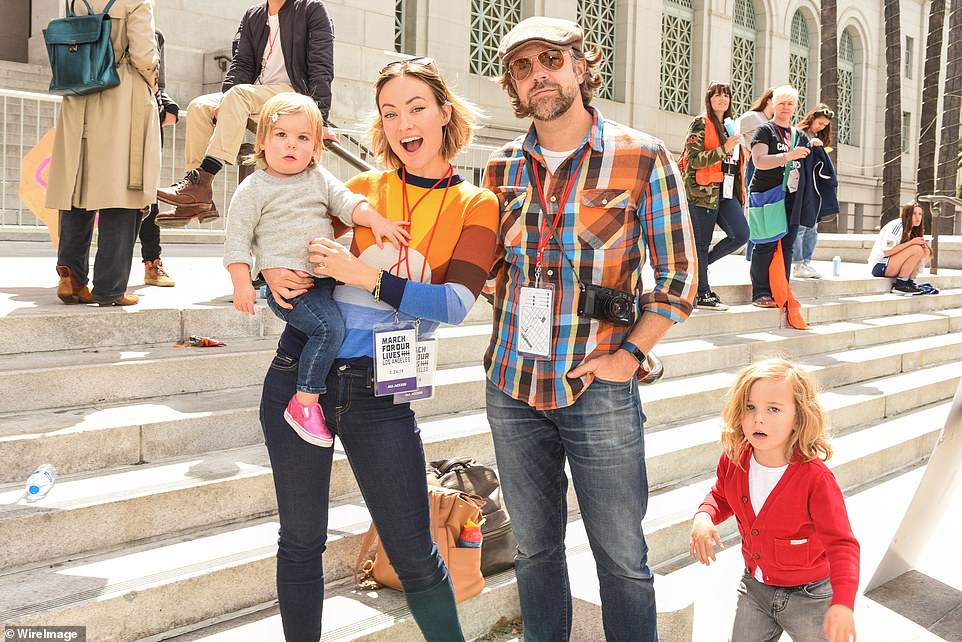 Their romance went from strength to strength as Harry and Olivia were seen enjoying a romantic date night on April 14 2021 at a pub in west London. According to others at the pub the couple looked ‘completely smitten’ and were all over each other throughout the night.

Onlookers saw the American actress stroking his leg beneath their table throughout the evening.

Three months later the pair were  pictured packing on the PDA onboard a yacht in Tuscany, the two couldn’t keep their hands off each other as they enjoyed a passionate kiss on the luxury yacht.

The couple enjoyed each other’s company while laying on the yacht before diving into the ocean, the two were said to have had an ‘awesome time’ and it made for the perfect spot for the couple to grow even closer.

In December 2021 Olivia addressed the ‘false narrative’ surrounding her relationship with Harry, who she went public with just two months after splitting with actor Jason Sudeikis. 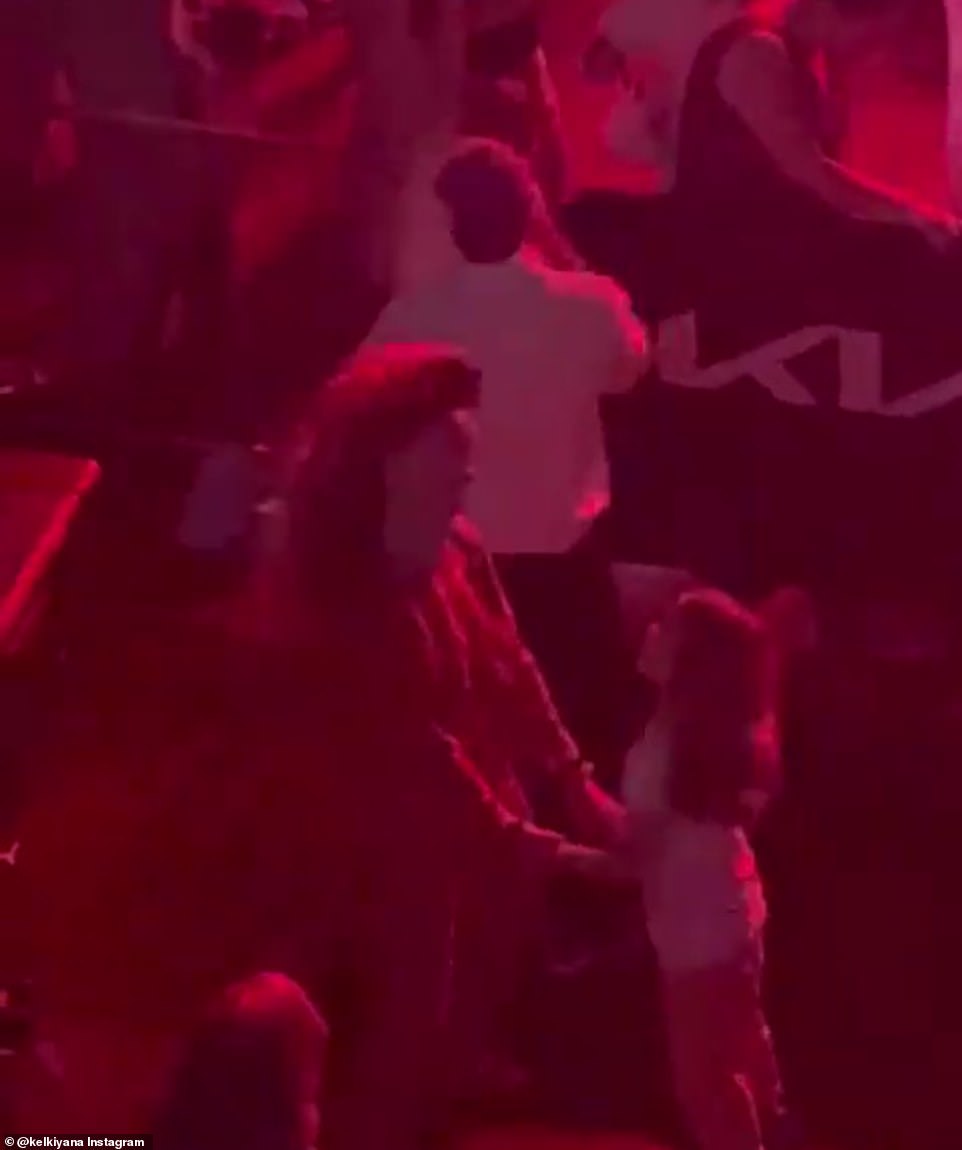 Before: Olivia was last seen supporting Harry when she attended his November 15 concert at LA’s Kia Forum, where she was accompanied by her two children 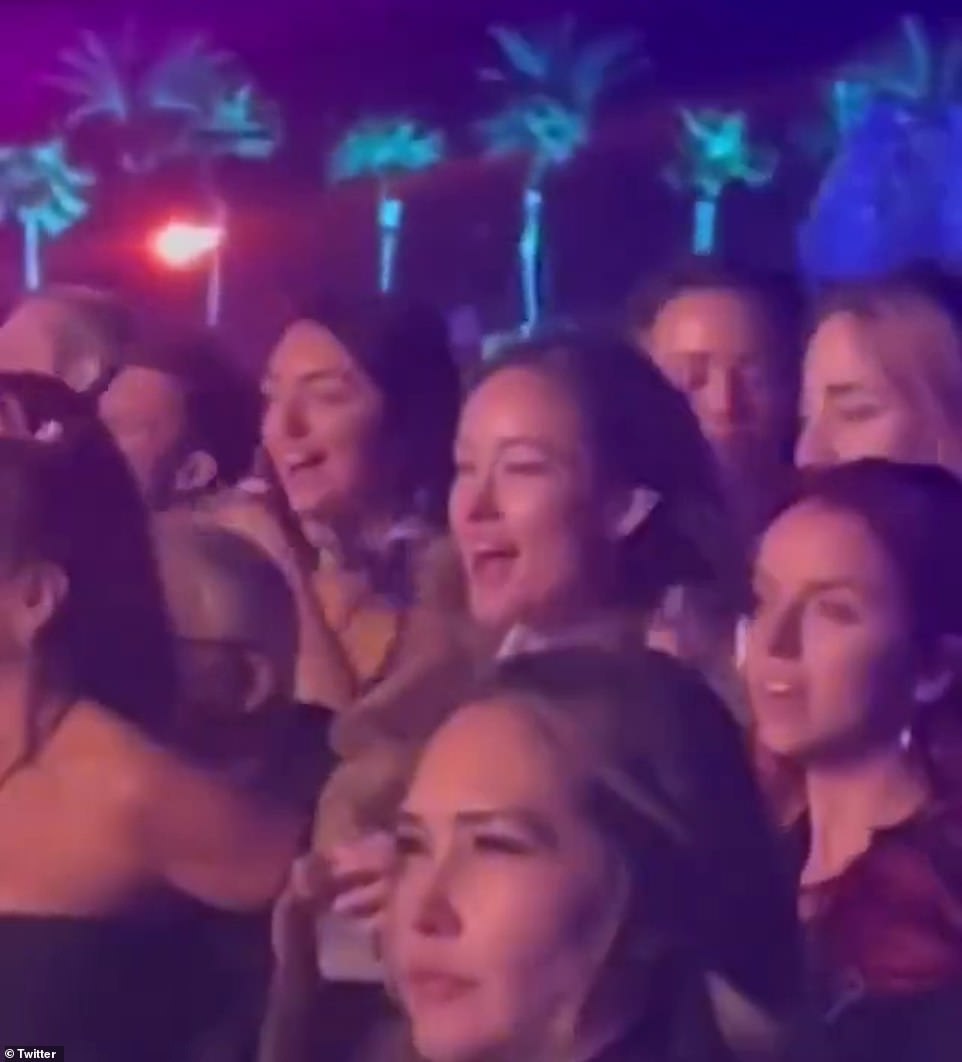 Fun; In April 2022 Olivia was seen cheering on her beau while he performed his headlining slot at Coachella musical festival in Indio, California

When Olivia was seen holding hands with her beau Harry, who is a decade younger than her, many people raised an eyebrow at how quickly she moved on.

And while the actress said it was ‘tempting’ to correct the false narrative she added in her Vogue interview: ‘But I think what you realize is that when you’re really happy, it doesn’t matter what strangers think about you.’

In April 2022 Olivia was seen cheering on her beau while he performed his headlining slot at Coachella musical festival in Indio, California.

Olivia was spotted rocking out and dancing with his friends. One video showed Olivia in the audience smiling while Harry belted out his solo hit Sign of the Times.

Last month it was reported Florence and Harry shared an offscreen kiss after developing ‘instant chemistry’ on the set of Don’t Worry Darling – weeks before the One Direction star began a relationship with Olivia.

The beleaguered film, in which Styles and Pugh play a married couple, has been overshadowed by a series of controversies both before and after its memorably awkward premiere at the Venice Film Festival in September.

Notably, Pugh failed to acknowledge Wilde on the red carpet following an on-set dispute – thought to be sparked by the actress’s discomfort at her director embarking on a very public relationship with Styles while shooting the film on location in Los Angeles.

Claims: Last month it was reported Harry and Florence Pugh  reportedly shared an offscreen kiss after developing ‘instant chemistry’ on the set of Don’t Worry Darling – weeks before the One Direction star began a relationship with Olivia

Sources claim their fall-out stems from the initial chemistry shared by Pugh and her screen husband before he became romantically involved with Wilde.

An insider told The Sun: ‘Harry and Florence had chemistry from the off, which translated incredibly well on-screen. One night they had a bit of a snog, all very light-hearted and a bit of fun, and that was that.

‘It was being gossiped about by a couple of members of production, otherwise no one would have known. Harry was very much single at the time and Florence had separated from Zach Braff, although she’d kept the split quiet to — ironically — avoid headlines.

‘There was no cheating or misbehaviour from anyone. However, later on, Harry and Olivia started spending more time together — sneaking off for coffees, hanging out in one another’s trailers, and sharing small, routine intimacies.’

The insider added that it was clear Harry and Olivia had a real connection and Florence was reportedly unhappy when photos of them holding hands surfaced.

There was already said to be tension between the two women, with Harry and Olivia’s burgeoning romance making things worse.

MailOnline contacted representatives for Styles, Pugh and Wilde for comment.

A report from Page Six in late July claimed that Pugh was upset with Wilde because she was hooking up with leading man Harry during the production — while still engaged to Jason Sudeikis — before they split in November.

‘I can tell you for a fact that Flo seeing Olivia and Harry all over each other on set did not go down well as Olivia was still with Jason when she first hooked up with Harry,’ the source said.

Pugh was asked by an Italian journalist at the event about what she found ‘inspiring’ in the film and appeared to make a sly dig at Wilde.

Asked when she ‘says ‘no’ off camera, Pugh jokingly responded: ‘When do I say ‘no’? When someone says I can’t have cake.’ 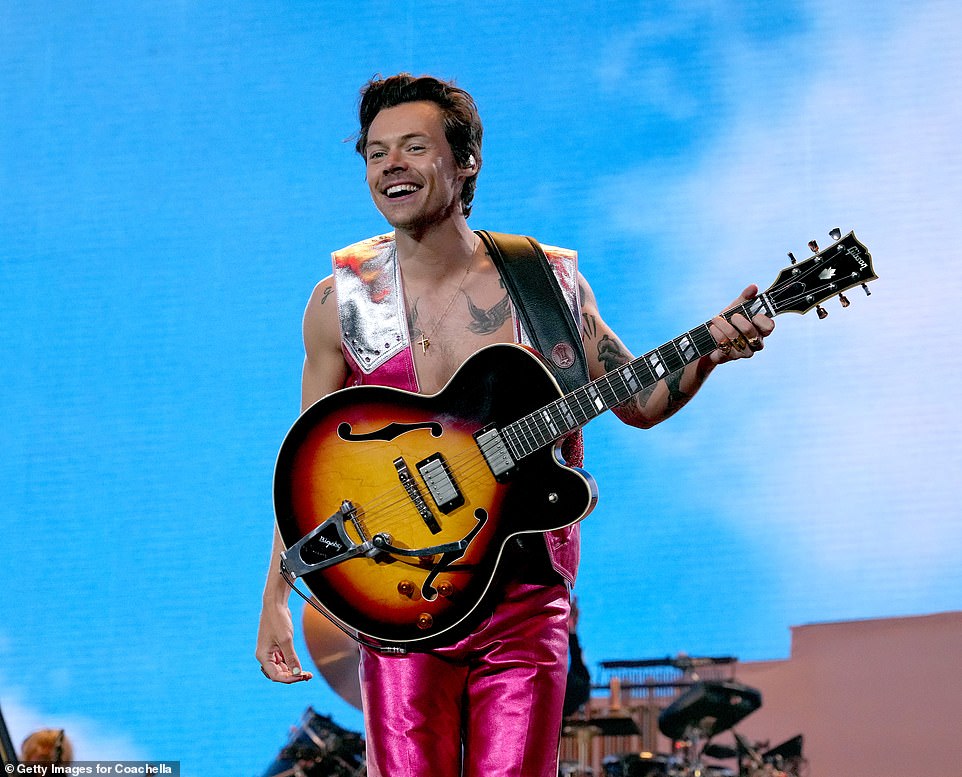 Back at it: Adore You hitmaker Harry recently battled a brutal flu which saw him cancel three of his sold-out Los Angeles concert dates just hours before he was set to take the stage at The Kia Forum in Inglewood (pictured April)

Ancient ford is closed after millions tuned in on TikTok to watch videos of...

Stassie Karanikolaou continues to use a scooter to help her move around with her...