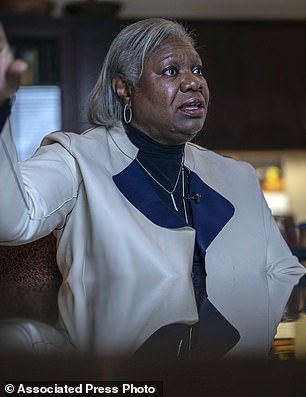 Faculty leaders at a Minnesota college that dismissed an art history instructor who showed depictions of the Prophet Muhammad in a course have overwhelmingly called for the university president to resign.

Faculty leaders at Hamline University said 71 of 92 members who attended a meeting Tuesday voted to call on President Fayneese Miller to resign immediately.

They say they lost faith in Miller because of her handling of an objection lodged by a Muslim student who said seeing the artwork violated her religious beliefs.

The adjunct instructor who showed the artwork, Erika López Prater, sued the private liberal arts school last week after it declined to renew her contract. 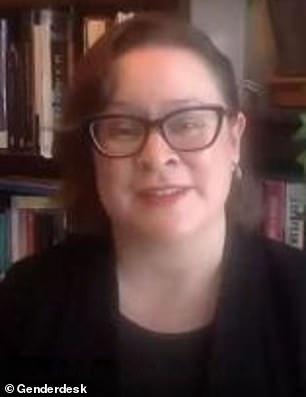 Faculty leaders at a Minnesota college that dismissed art history instructor Erika López Prater (pictured right), who showed depictions of the Prophet Muhammad in a course have overwhelmingly called for the university president Fayneese Miller (pictured left) to resign

‘It became clear that the harm that’s been done and the repair that has to be done, that new leadership is needed to move that forward,’ Jim Scheibel, president of the Hamline University Faculty Council, told the Star Tribune of Minneapolis.

The faculty objected to what they considered a violation of academic freedom.

‘We are distressed that members of the administration have mishandled this issue and great harm has been done to the reputation of Minnesota´s oldest university,’ the faculty council statement read.

It later went on to say, ‘As we no longer have faith in President Miller´s ability to lead the university forward, we call upon her to immediately tender her resignation to the Hamline University Board of Trustees.’

After criticism from across the country, Miller conceded last week that she mishandled the episode, which sparked a debate over balancing academic freedom with respect for religion.

‘Like all organizations, sometimes we misstep,’ she said in a joint statement with the chair of the school´s trustees. ‘In the interest of hearing from and supporting our Muslim students, language was used that does not reflect our sentiments on academic freedom. Based on all that we have learned, we have determined that our usage of the term `Islamophobic´ was therefore flawed.’

A Hamline spokesman told the St. Paul Pioneer Press that Miller and her team were discussing how to respond to the faculty vote. 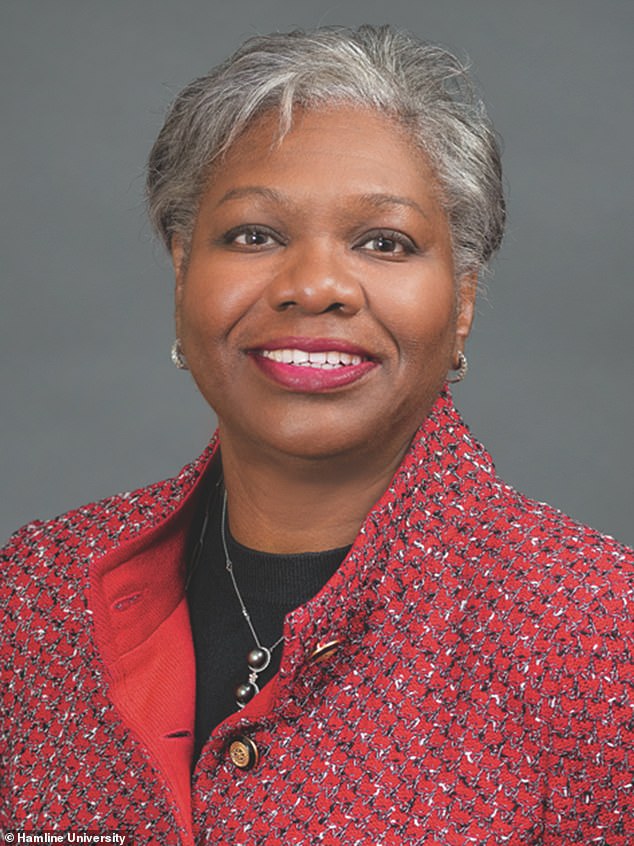 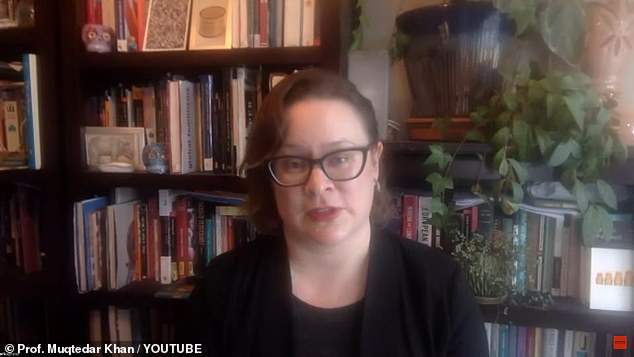 The adjunct instructor who showed the artwork, Erika López Prater, sued the private liberal arts school last week after it declined to renew her contract 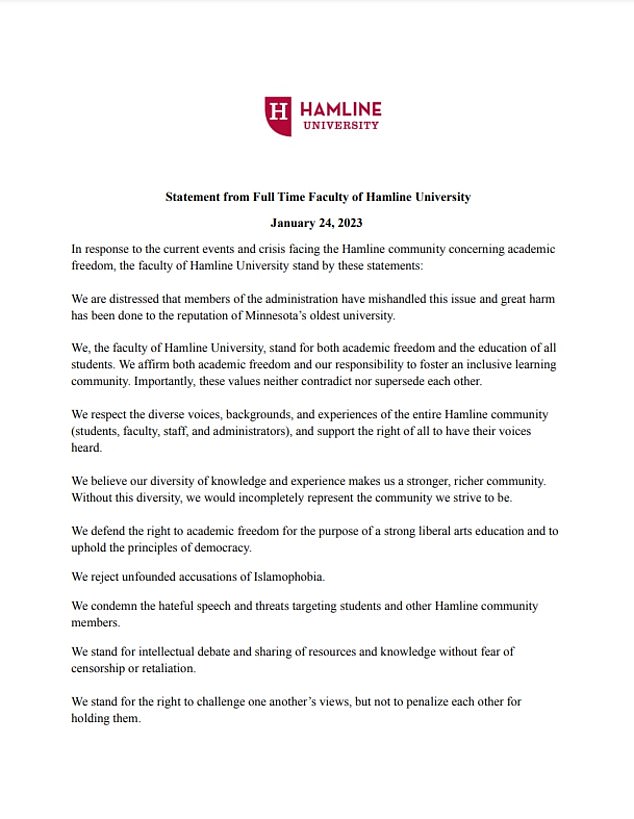 In October, adjunct professor Prater showed an online class an image of the Prophet Muhammad as part of an art history class.

She warned the students watching virtually what she planned to do, and gave them ample warning to look away from the image if they were so inclined. In some – but not all – fractions of Islam, it is forbidden to look at the image of the Prophet.

After the class, Aram Wedatalla – a student who is also the president of the university’s Muslim association – complained.

Wedatalla, the president of the university’s Muslim association who spearheaded the campaigning to get Lopez Prater fired, chose to remain online in the class.

Afterward, she and others promptly complained to school officials that the image ‘blindsided’ her and made her feel marginalized. 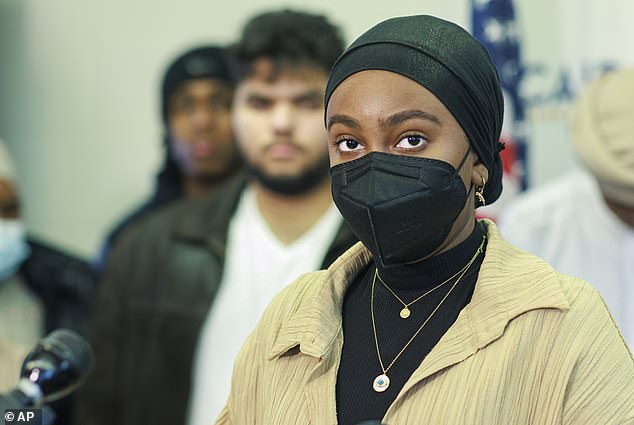 Aram Wedatalla complained to the school, claiming she’d been ‘blindsided’ by the image of the Prophet Muhammad despite Professor Prater giving them multiple warnings that she intended to show it. It was an online class, during which she said students had the opportunity to turn off their screens or look away

‘I’m 23 years old. I have never once seen an image of the prophet,’ she said in a conference streamed live on CAIR-MN’s Facebook page, adding that she felt marginalized.

‘It just breaks my heart that I have to stand here to tell people that something is Islamophobic and something actually hurts all of us, not only me.’

Prater, who’d been hired that semester for the first time and was due to return for the spring semester, was shown the door.

The university, bending to the demands of the Muslim association, called the incident ‘Islamophobic’.

It sparked uproar among other Muslims and professors across the country, who said the school had stifled academic freedom. 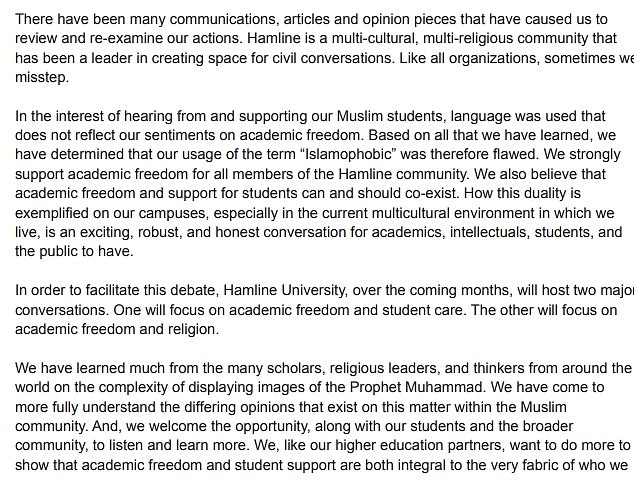 In a statement, Hamline said it was a ‘misstep’ to have labeled the lesson Islamophobic.  It came two hours after the professor and her attorneys filed a lawsuit 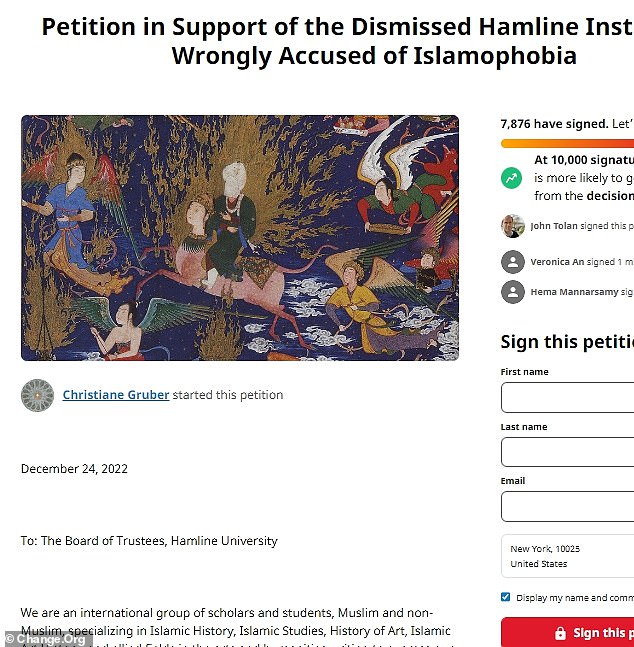 There was widespread support for the professor, with thousands signing a petition for her to be reinstated

One Muslim professor accused the school of advancing an ‘extreme’ Islamist view that is only held by a small number of people.

The school dug its heels in initially, saying it wanted to protect its Muslim students and make them feel heard.

On January 14, Professor Prater broke her silence in a discussion with Muslim scholars.

‘In the way that I was framing Islamic art, I know that there are many practices within Islam, I know historically there have been differing attitudes as to how the divine should be depicted but I know that inconsistency is consistent within many religions – it’s not specific to Islam. 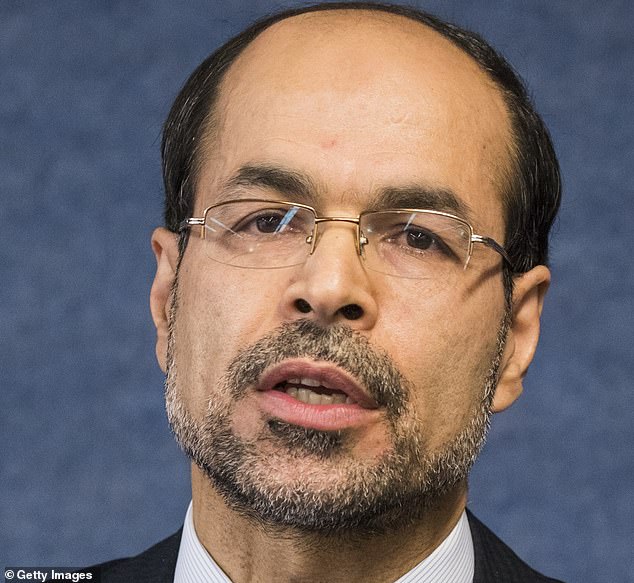 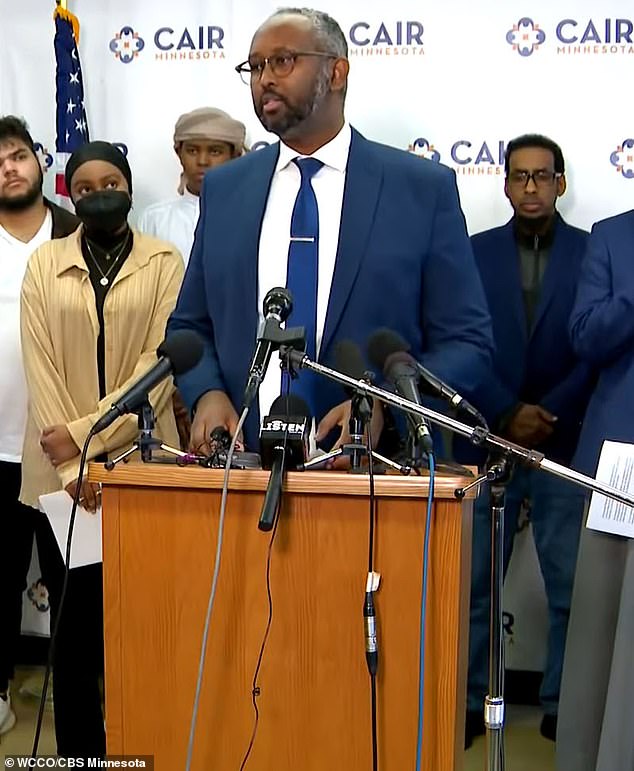 The statement did not mention how the firing was earlier celebrated by CAIR-MN’s Jaylani Hussein, executive director of its Minnesota sect. Hussein last week slammed the academic’s decision to show the art piece offensive and ‘an act of Islamophobia’

‘During my class I did give my students a heads-up that I was about to show an image of the Prophet Muhammad, I explained my reasons for doing so, but also to demonstrate the rich diversity within the history of Islam.

‘Of course, in an art history classroom, images are the primary source documents that we use as evidence in order to learn about diverse cultures and thinking and attitudes.

‘I spent a couple minutes explaining to students, before I showed the images. I told my students if they didn’t feel comfortable engaging visually, they were free to do what made most sense to them.

‘I tried to empower them to walk away from the video portion of the online classroom, or do what kind of made most sense to them.

‘I’m not a mind reader. My discussion in my class was fact based and on explaining the beginnings of Islam itself. 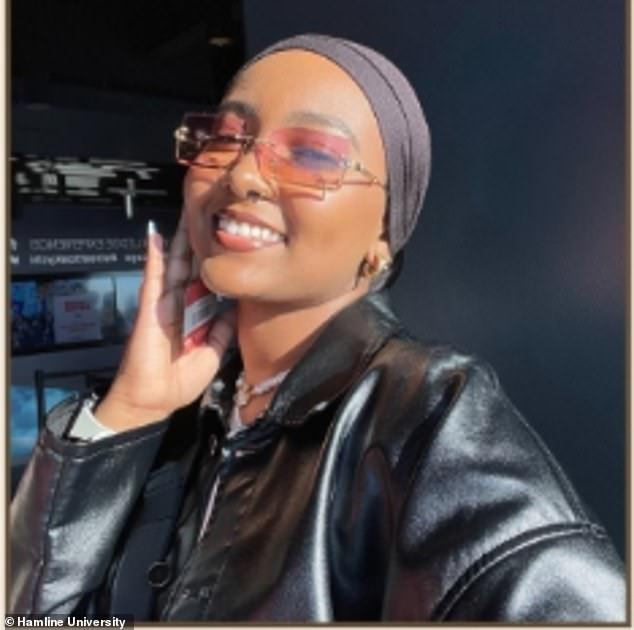 Wedatalla, the president of the university’s Muslim association who spearheaded the campaigning to get Lopez Prater fired, chose to remain online in the class 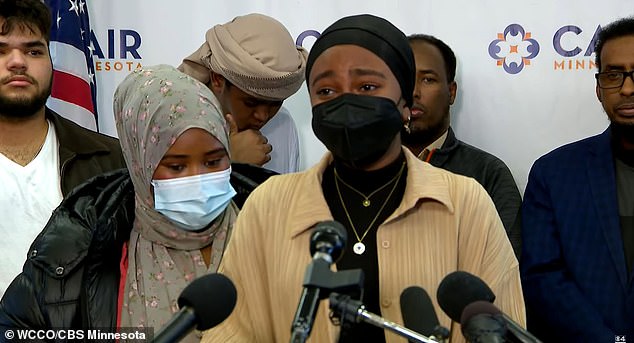 ‘All of the images that I used were very respectful, they were meant to be instructional and also referential in their original historical contexts.’

‘She had some pretty strong feelings that she expressed to me. But one of them that perhaps gets to the heart of the matter was she thought the warnings that I had provided to the class didn’t even matter, because she believed that images of the Prophet Muhammad should never be shown full stop.

The instructor alleges in her lawsuit that Hamline subjected her to religious discrimination and defamation, and damaged her professional and personal reputation.

The American Association of University Professors, which is devoted to academic freedom, has launched an inquiry and is planning a campus visit next month.

While leaders of some local Muslim groups have criticized López Prater, the national office of the Council on American-Islamic Relations disputed claims that her actions were Islamophobic. The group said professors who analyze images of the Prophet Muhammad for academic purposes are not the same as ‘Islamophobes who show such images to cause offense.’