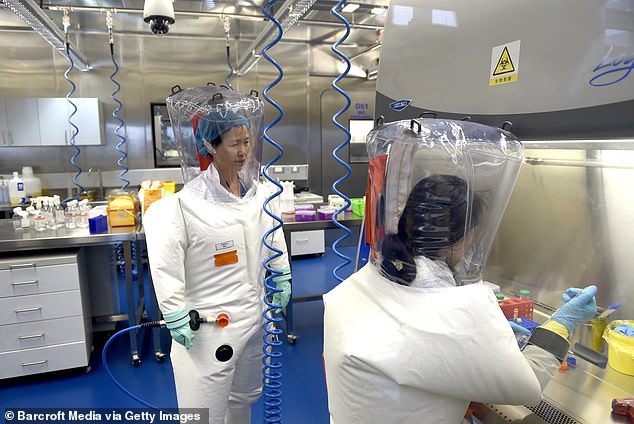 The NIH was blasted today by an official watchdog for failing to keep tabs on US-sponsored virus experiments in China, which are feared to have caused the Covid crisis.

A report by the US Office of Inspector General found the country’s medical research agency did not properly review whether the tests in Wuhan involved dangerous pathogens with pandemic potential.

The federal audit looked at three taxpayer-funded research grants awarded to the now-notorious EcoHealth Alliance, run by British scientist Peter Daszak, between 2014 and 2021.

It found the National Institutes of Health (NIH) and EcoHealth failed to ‘understand the nature of the research conducted, identify potential problem areas, and take corrective action’.

‘With improved oversight, NIH may have been able to take more timely corrective actions to mitigate the inherent risks associated with this type of research,’ the report added.

Virologist Shi Zheng-li – nicknamed the ‘Bat Lady’ – is pictured in the lab. She hunted down dozens of deadly Covid-like viruses in bat caves and studied them at the WIV 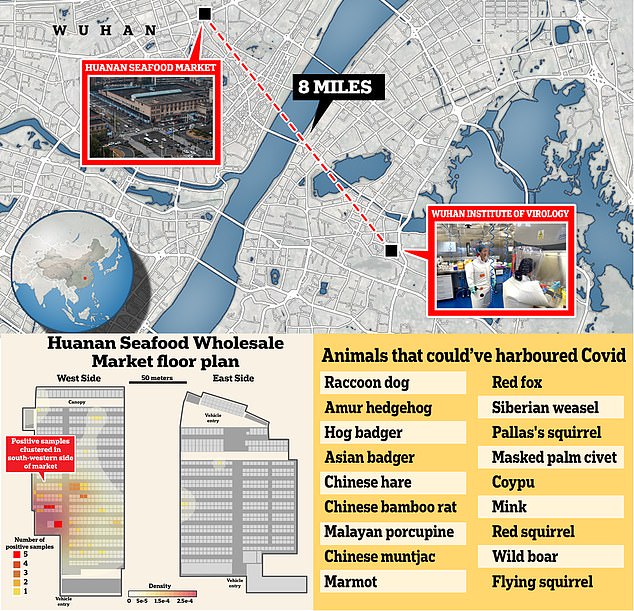 The question of whether the global outbreak began with a spillover from wildlife sold at the market or leaked out of the Wuhan lab just eight miles across the Yangtze River has given rise to fierce debate about how to prevent the next pandemic. New studies point to a natural spillover at the Huanan wildlife market. Positive swab samples of floors, cages and counters also track the virus back to stalls in the southwestern corner of the market (bottom left), where animals with the potential to harbor Covid were sold for meat or fur at the time (bottom right)

While the lab leak theory was initially dismissed as conspiracy and xenophobic, a growing number of scientists have come around to the idea the virus may have escaped during an accident at the Wuhan Institute of Virology (WIV).

The research facility is less than 10 miles from an animal slaughter market where the first series of human cases were clustered. Some experts also claim Covid’s unique spike protein, which it uses to infect people, shows hallmarks of engineering.

But others have deemed those scenarios unlikely and say that there is some indirect evidence that Covid did jump from animals at the Huanan Seafood Market, where animals known to harbor Covid including raccoon dogs, hedgehogs, rats and squirrels, were kept in squalid conditions.

Direct evidence for a natural or man-made origin has yet to emerge.

Do you think Covid was the result of a lab leak or natural spillover?

EcoHealth Alliance was awarded $8million in Government research grants between 2014 and 2021, which it subcontracted to research facilities. The WIV was one of eight teams awarded grants at that time.

Today’s audit said there was a lack of oversight by the NIH and EcoHealth at the Chinese facility and other labs that benefitted from Government grants.

The report said: ‘Despite identifying potential risks associated with research being performed under the EcoHealth awards, we found that NIH did not effectively monitor or take timely action to address EcoHealth’s compliance with some requirements.

‘Although NIH and EcoHealth had established monitoring procedures, we found deficiencies in complying with those procedures limited NIH and EcoHealth’s ability to effectively monitor federal grant awards and subawards to understand the nature of the research conducted, identify potential problem areas, and take corrective action.’

In the US, groups like EcoHealth that want to conduct research involving ‘enhanced potential pandemic pathogens’ must have their work approved by the Department of Health and Human Services (HHS). 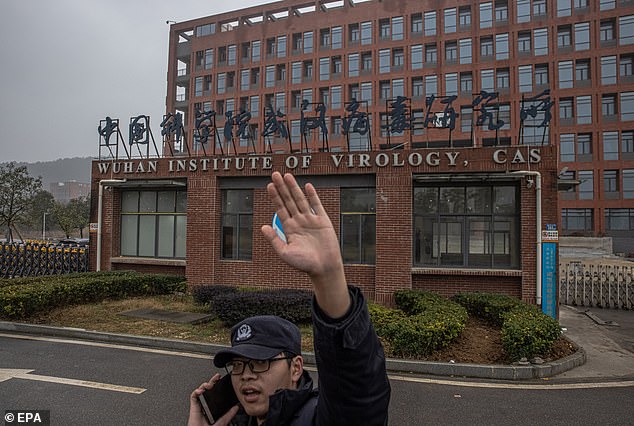 Pictured: The Wuhan Institute of Virology, where crucial data was wiped by Chinese scientists 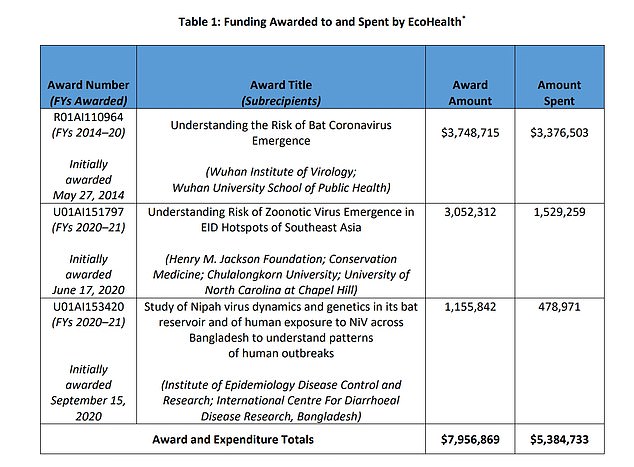 The OIG report cites three specific awards from EcoHealth, using NIH funds, that had the potential to be gain-of-function research but did not go through proper clearances. Included is the award to the WIV, which has been at the center of the lab leak theory

HHS developed a framework for approval of these experiments in 2017 after a three-year moratorium that paused all agency reviews of research proposals and funding from going toward such experiments.

Under the rules, HHS assembles a panel of reviewers to carry out a risk-benefit analysis.

The review board looks at three criteria: whether the pros outweigh the cons, whether there are no other equally effective but less risky options; and whether the research team and facility have the capacity to do the work safely and securely and to respond rapidly if there are any accidents or security breaches.

But the audit found the NIH did not refer the research for review ‘because it determined the research did not involve and was not reasonably anticipated to create, use, or transfer an ePPP.’

The report said: ‘Based on these findings, we conclude that NIH missed opportunities to more effectively monitor research.

The NIH’s infectious disease arm, the National Institute of Allergy and Infectious Disease, was led by Dr Anthony Fauci at the time the research was carried out.

Titled ‘Understanding the Risk of Bat Coronavirus Emergence’, some have speculated this research created the SARS-CoV-2 virus, which causes Covid. 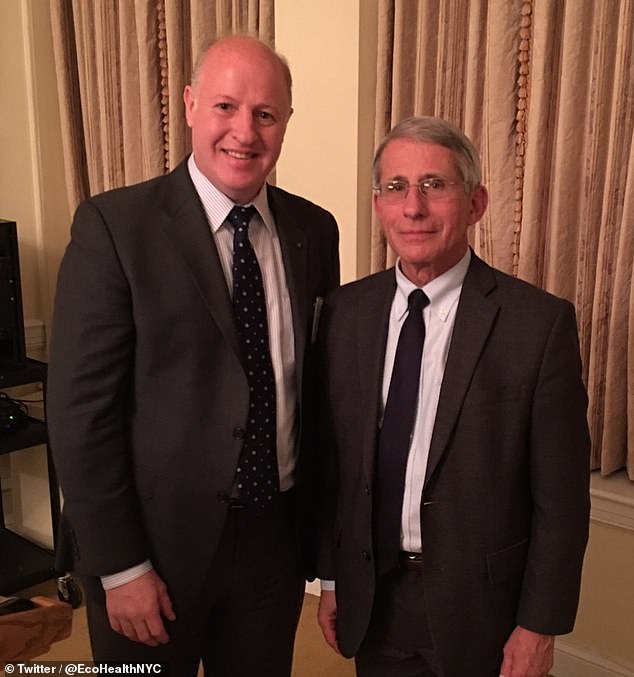 An award of $3million to the University of North Carolina on June 17, 2020, was cited by investigators too. The research in question was titled ‘Understanding Risk of Zoonotic Virus Emergence in EID Hotspots of Southeast Asia’.

A $1.1million award given to a national research facility in Bangladesh to study the Nipah virus in bats and humans ‘to understand patterns of human outbreaks’ was also cited as a cause for concern.

The report said oversight was crucial for grants given to foreign entities that may become uncooperative with investigators – like the WIV has in recent years.

Chinese officials were found to have wiped crucial databases from the lab and stifled independent investigations into the facility when questions started to be asked about its involvement.

Researchers who fell ill with a mysterious flu-like virus months before the official Covid timeline were silenced or disappeared.

One of its chief scientists was nicknamed the ‘Bat Lady’ for her extensive work on coronaviruses like Covid.

Investigators say EcoHealth also did not submit proper progress reports on the use of its fund in a timely manner, with information coming in two years late.

It also says the NIH failed to terminate its grant with EcoHealth after the non-profit broke protocols.

Sen Rand Paul, a Kentucky Republican who has been among the staunchest supporters of the lab leak theory, said in a statement: ‘The Inspector General confirms what we already knew – NIH failed to conduct oversight of EcoHealth Alliance’s grant awards.

‘The continued funding of EcoHeath Alliance despite its repeated noncompliance with federal regulations and policies further demonstrates the need to reform oversight of risky research paid for the the American taxpayers.’

‘Despite [EcoHealth] possibly having caused the COVID-19 pandemic, and despite definitely having repeatedly and gravely violated terms of a US-government grant, currently has 12 active US-government grants and contracts, totaling more than $34 million.’

Justin Goodman, from the White Coat Waste Project group, said: ‘This audit confirms what we have been documenting since early 2020 when we first exposed NIH’s funding of the Wuhan lab: EcoHealth Alliance shipped tax dollars to Wuhan for dangerous animal experiments that probably caused the pandemic, violated federal laws and policies and wasted tax dollars.

‘Yet, the Wuhan lab remains eligible for even more taxpayer money for animal tests and just since the pandemic began, EcoHealth has raked in at least $46million in new federal funds from the DOD, USAID, NIH, and NSF.

‘As the group that first exposed and ended EcoHealth’s calamitous collaboration with the Wuhan animal lab, we’re calling on Congress to defund these rogue organizations once and for all.

‘Taxpayers should not be forced to bankroll reckless white coats who waste money, break the law and place public health in peril. Stop the money, stop the madness.’

Astrologer reveals how tomorrow’s super blood moon could spark ‘chaos and disruption’ in your...

Chinese ‘Covid prevention guard’ chases down a corgi and beats it to death because...