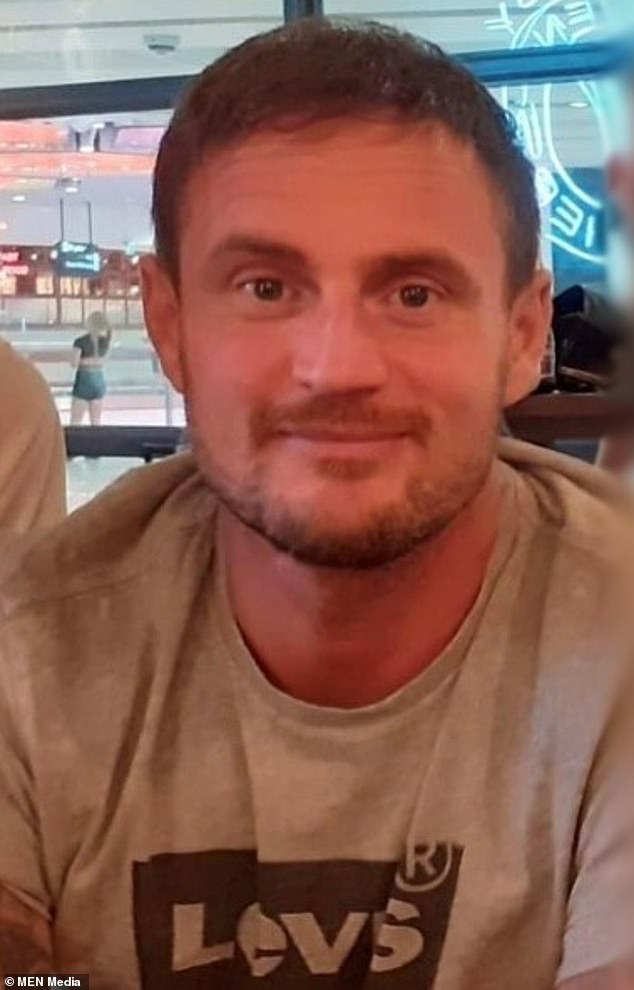 A man whose body was found ‘smoking’ and ‘covered in white powder’ in a village near Wigan has been named as a 38-year-old devoted father.

Liam Smith’s body was discovered on a residential street at around 7pm on Thursday in Shevington, a suburb of Wigan, Greater Manchester.

Police confirmed on Sunday he was fatally shot and had acid poured over his body.

In a brief statement released through Greater Manchester Police, his family said: ‘Liam was kind-hearted, funny, the life and soul of the party.

Father Liam Smith, 38, has been described as a ‘devoted dad’ who was ‘kind-hearted’

‘He was the most devoted dad, much-loved son, brother, grandson and uncle. He will sorely be missed by all who knew and loved him.’

Police were called to Kilburn Drive in Shevington on Thursday shortly after a member of the public discovered Mr Smith’s body on a path between two houses which led to open fields.

Eyewitnesses said the scene was ‘very odd’, adding: ‘The body appeared to have smoke coming off it and was covered in white powder’, The Independent reports.

Greater Manchester Police said there were potentially ‘hazardous substances’ on the body, but stressed any risk to the wider public was very low.

A police cordon was set up while officers investigated the scene, with a forensic tent erected on the road inside the tape.

A post-mortem by the Home Office has been carried out, enabling identification of Mr Smith.

His family are currently being supported by specialist officers, police said. 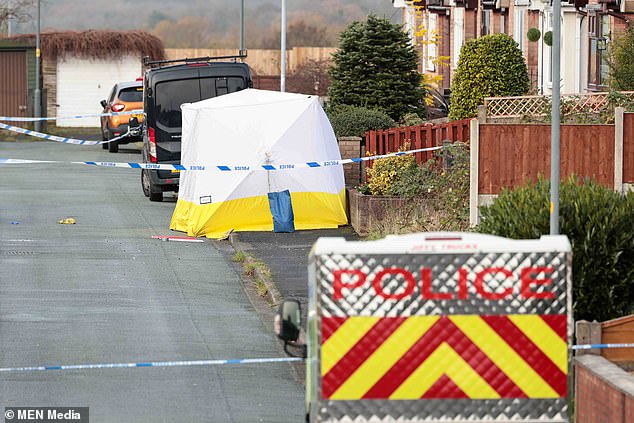 Forensic teams worked over a large area in Shevington, Wigan, after Mr Smith’s body was discovered 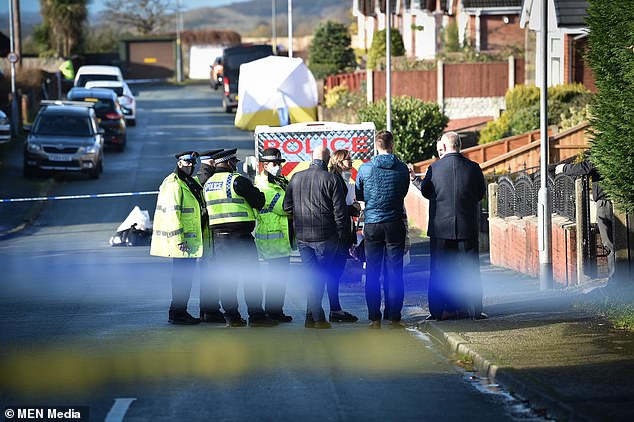 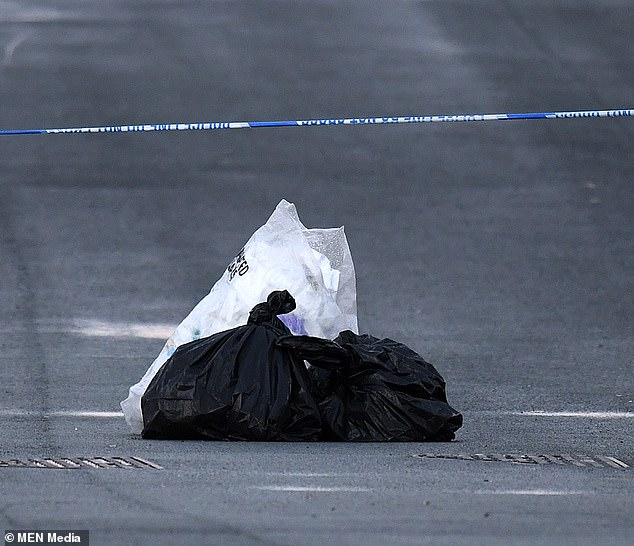 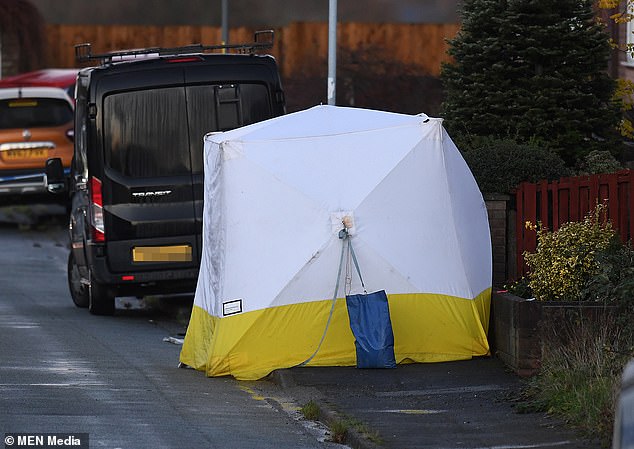 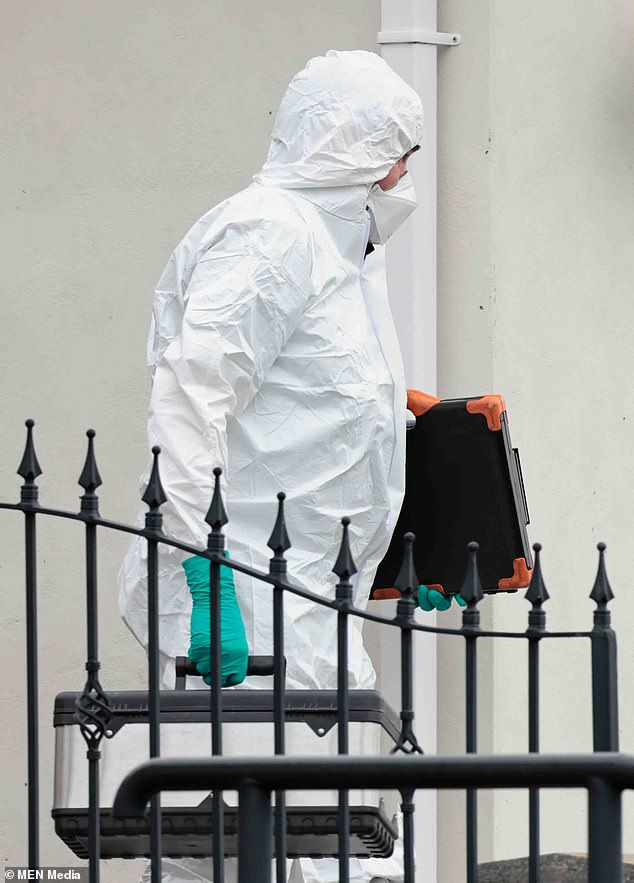 Speaking at a press conference on Friday, Detective Superintendent Alan Clitherow said: ‘It is a challenging set of circumstances, we have got dedicated officers from the Major Incident Team, obviously less than 24 hours into the investigation, so we are now unpicking exactly what has gone on.

‘We don’t know what the substance is, we have done some initial inquiries, we know it’s low risk, so as I mentioned before, anyone directly in contact with the body should seek medical advice if they feel unwell but there’s no wider risk to anyone else.’

Mr Clitherow said members of the public should not be alarmed if they see officers wearing protective clothing to remove the body, saying this is ‘purely precautionary’.

A spokesperson from GMP Wigan said: ‘Police are working to identify the body and enquiries are ongoing, we are keen to speak to anyone who has any information about this incident.

‘Officers are out speaking to residents and are highly visible in the area. The scene is contained, and it is believed there is no wider risk to the surrounding area,’ added the spokesperson.

Officers have urged anyone who had direct contact with the body to speak to officers or seek medical advice immediately.

They urged anyone with information about the incident to contact the force.

Pebble Beach: Caddie at Pro-Am ‘receives CPR on the course after collapsing on the...

Princess of Wales looks radiant in blue on first solo US tour engagement at...

Brawl breaks out in crowd at third and final test between England and New...

Hunter Biden sells more paintings for up to $225,000 to anonymous buyers