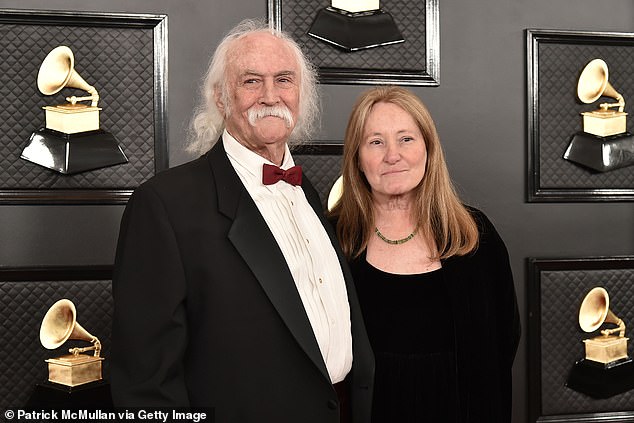 Iconic musician David Crosby has died at the age of 81, DailyMail.com has confirmed.

The member of the band the Byrds and Crosby, Stills & Nash died Thursday ‘after a long illness,’ his wife Jan Dance told Variety.

‘It is with great sadness after a long illness, that our beloved David (Croz) Crosby has passed away,’ she said in the statement. ‘He was lovingly surrounded by his wife and soulmate Jan and son Django. Although he is no longer here with us, his humanity and kind soul will continue to guide and inspire us.

The latest: Iconic musician David Crosby has died at the age of 81, as his wife Jan Dance told Variety that he passed away after a ‘long illness.’  Pictured in 2020 in LA

She continued: ‘His legacy will continue to live on through his legendary music. Peace, love, and harmony to all who knew David and those he touched. We will miss him dearly.

‘At this time, we respectfully and kindly ask for privacy as we grieve and try to deal with our profound loss. Thank you for the love and prayers.’

Crosby was a singer and guitarist for The Byrds from 1964-1967, along with Gene Clark, Chris Hillman and Michael Clarke. The folk rock group, based out of Los Angeles, had notable hits such as Turn! Turn! Turn! and Mr. Tambourine Man.

He later formed the musical trio Crosby, Stills & Nash with the Hollies’ Graham Nash and Buffalo Springfield’s Stephen Stills, with the group’s 1969 debut album going multi-platinum. The album had notable hits such as Suite: Judy Blue Eyes and Marrakesh Express. 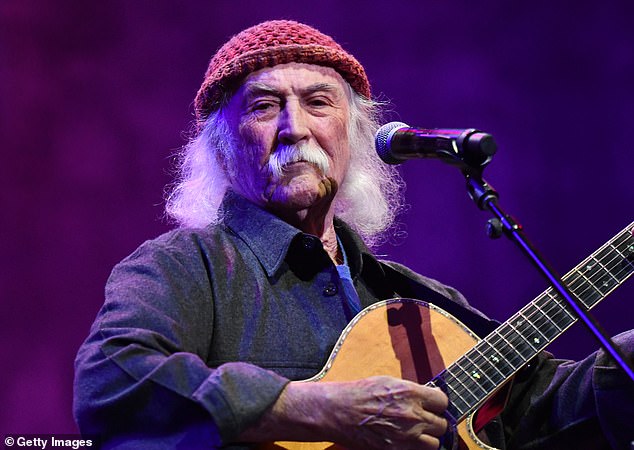 The famed musician was seen onstage in Los Angeles in 2019 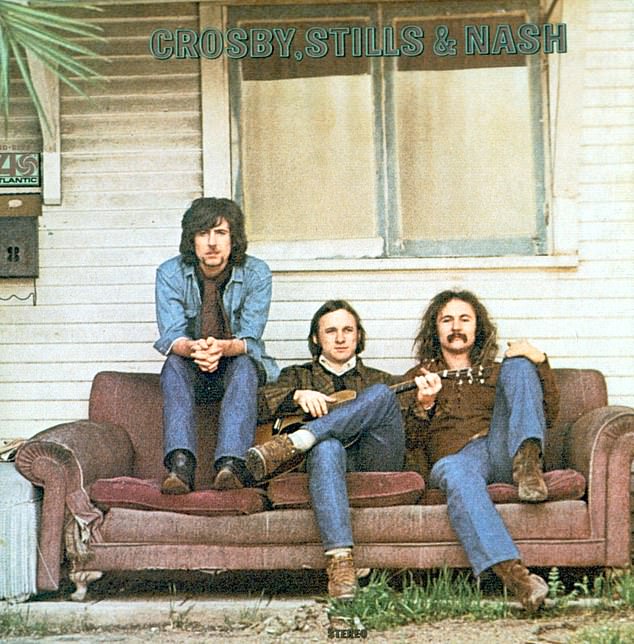 Crosby was pictured with bandmates Graham Nash and Stephen Stills on the cover of the 1969 album Crosby, Stills & Nash

The group eventually added legendary musical artist Neil Young into the fold, and were called Crosby, Stills, Nash & Young, before a series of partings and reunions in the 1970s.

The quartet had a trio of number one albums: 1970’s Déjà Vu – which includes the hits Teach Your Children, Ohio and Woodstock – as well as 1971’s 4-Way Street and the 1974 compilation So Far. 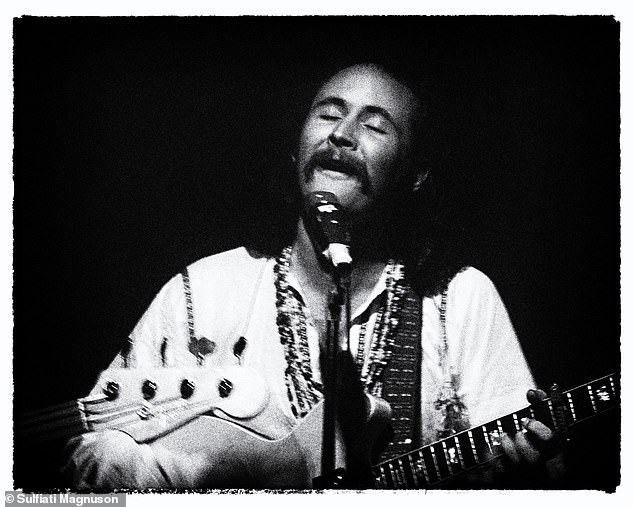 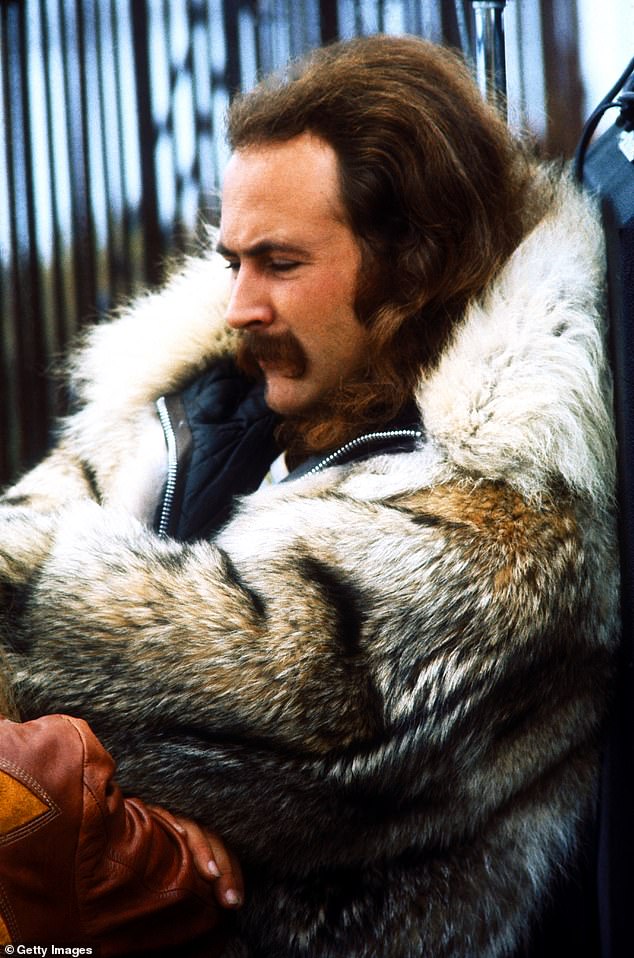 He was pictured in September of 1969 at the Big Sur Folk Festival in Big Sur, California 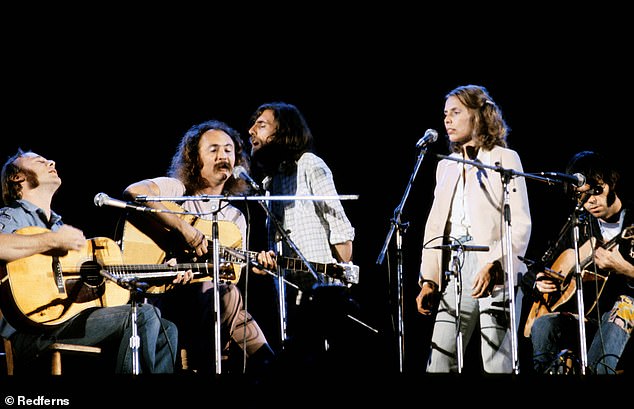 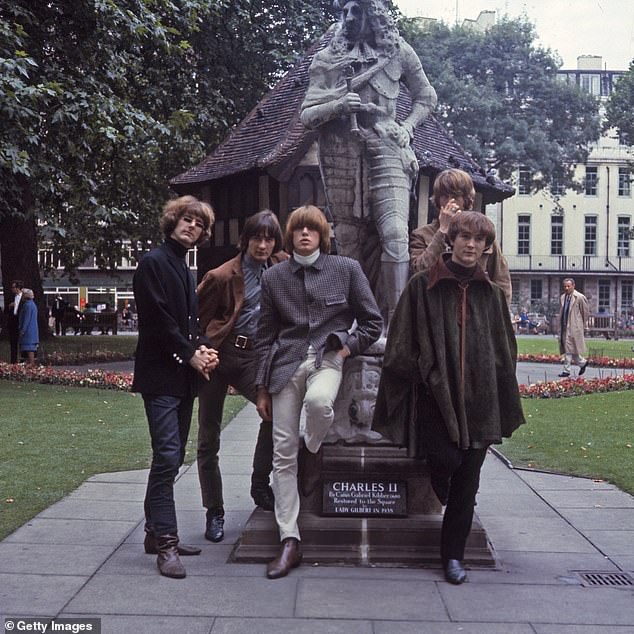 Crosby, Stills & Nash got back together for the 1977 album CSN, which featured the single Just a Song Before I Go.

The group also put out albums including 1981’s Replay and 1982’s Daylight Again, the latter of which included the singles Wasted on the Way and Southern Cross. The group also released the 1983 album Allies.

Crosby ran into significant legal troubles in the mid-1980s, as he was convicted in connection with drug and weapons charges, leading to a nine-month 1985 stint in Texas state prison. 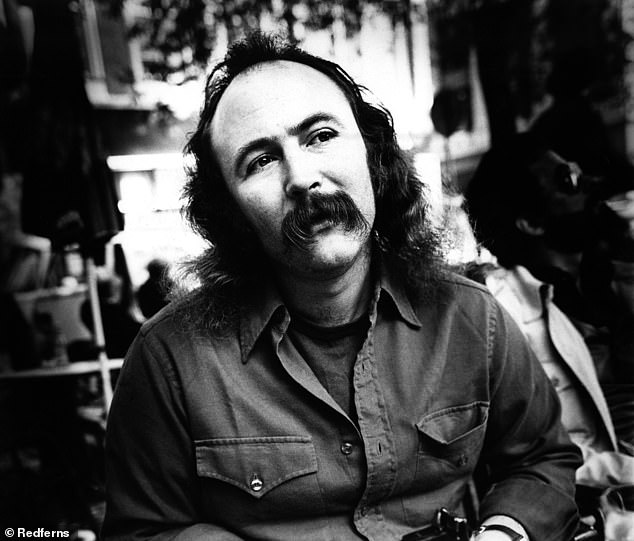 The accomplished musician was seen in the Netherlands in 1976 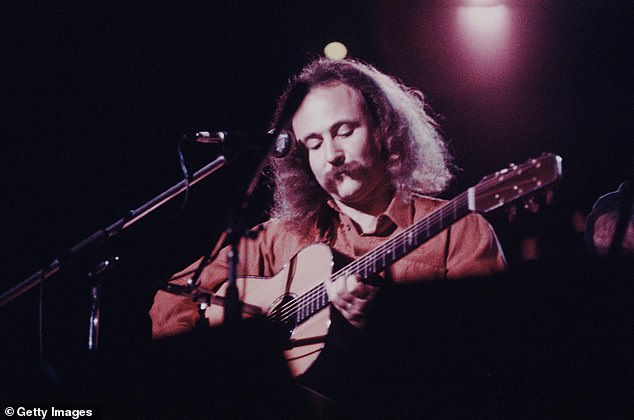 Crosby was pictured playing guitar in Tokyo in December of 1975

He made a comeback in 1988 with the album American Dream with Crosby, Stills, Nash & Young, as the album spawned the hit single Got It Made.

Crosby, Stills & Nash released a trio of albums between the years 1990 and 1998, with Young rejoining the ensemble for the 1999 album Looking Forward.

In 2006, the quartet toured the country on the Freedom of Speech concert tour following the release of Young’s album Living with War. The tour had a political message amid the midterm elections that year.

Crosby was a two-time inductee into the Rock and Roll Hall of Fame, with The Byrds in 1991, and with Crosby, Stills & Nash in 1997.

Crosby also dabbled in acting, appearing in films such as Hook and Thunderheart; TV shows such as Roseanne and The John Larroquette Show; and voicing two roles on The Simpsons. 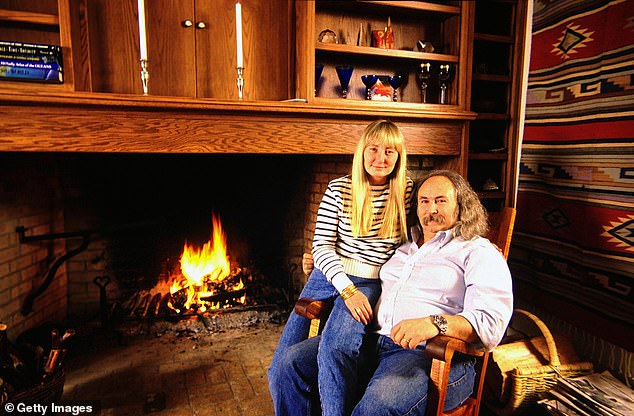 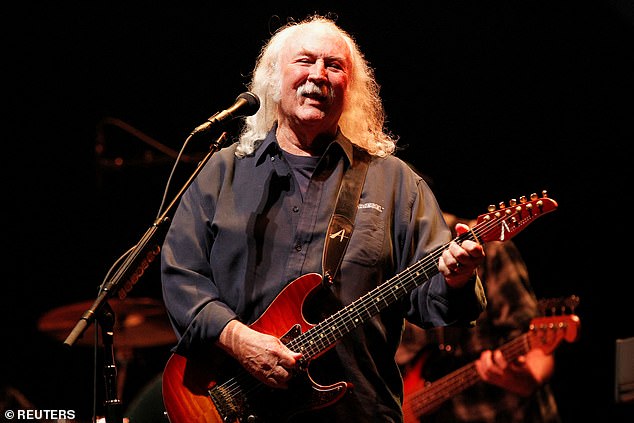 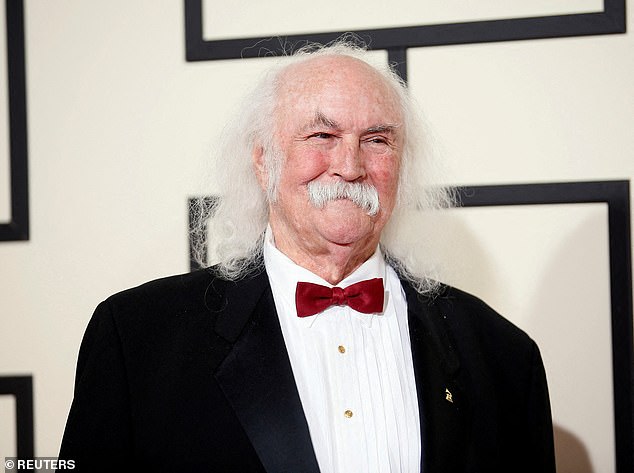 Crosby was the sperm donor father of lesbian singer Melissa Etheridge’s two children, one of whom ended up dying of a drug overdose in May of 2020.

Etheridge and former partner, Julie Cypher, used the musician’s sperm donation via an artificial insemination in conceiving daughter Bailey and son Beckett, who died at 21 from a drug overdose.

‘Today I joined the hundreds of thousands of families who have lost loved ones to opioid addiction,’ Etheridge said in a statement on Twitter at the time. ‘My son Beckett, who was just 21, struggled to overcome his addiction and finally succumbed to it today. He will be missed by those who loved him, his family and friends.’

Etheridge told the Today show in 2016 that she and Cypher had also considered using a sperm donation from her friend Brad Pitt, but circumstances prevented it, as Pitt was hoping to have a child at the time, and the then-couple were not interested in a third party parenting their kids.

‘It’s one of the reasons why David Crosby and his wife are so perfect – because they already had children,’ Etheridge said. ‘They were looking to do this as a gift.’

Etheridge was among the notable names to take to social media with memorial messages for Crosby, sharing a picture of them together.

‘I am grieving the loss of my friend and Bailey’s biological father, David,’ Etheridge said. ‘He gave me the gift of family. I will forever be grateful to him, Django, and Jan. His music and legacy will inspire many generations to come. A true treasure.’ 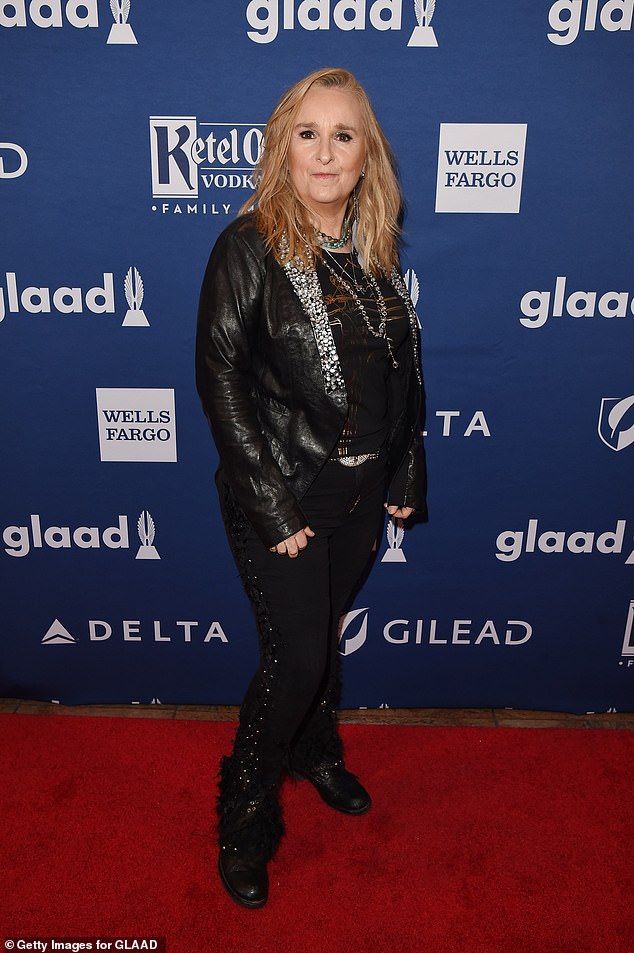 Crosby was the sperm donor father of singer Melissa Etheridge’s two children, one of whom ended up dying of a drug overdose in May of 2020. She was pictured in 2018

Also chiming in was Beach Boys legend Brian Wilson, who wrote, ‘I don’t know what to say other than I’m heartbroken to hear about David Crosby. David was an unbelievable talent – such a great singer and songwriter. And a wonderful person. I just am at a loss for words. Love & Mercy to David’s family and friends. Love, Brian.’

The official account for the late Tom Petty issued a statement that said ‘Tom counted David Crosby as a friend and a hero.

‘He visited often at his house in the valley. He was funny, provocative and electric with talent. His contribution to music will never be forgotten. Our thoughts and love to his family, bandmates and fans.’

The official account for The Doors called Crosby ‘another ethereal fixture of the ‘60s peace and love movement; a legend within his own right, and every group he was a part of.

‘Coming up in the same era as The Doors, David Crosby had the voice and song writing abilities that made him completely unique…’

Other notable memorials came from entertainers such as Billy Corgan, the group Hanson, and actress Christina Applegate.

Crosby was lauded by luminaries such as the Beach Boys Brian Wilson, as well as the official accounts for the late Tom Petty and The Doors

Other notable memorials came from entertainers such as Billy Corgan, the group Hanson, and actress Christina Applegate

Amber Heard breaks down as she describes Johnny Depp sexually assaulting her with a...

Tim Allen SLAMS new Lightyear movie after he was axed from Disney film that...