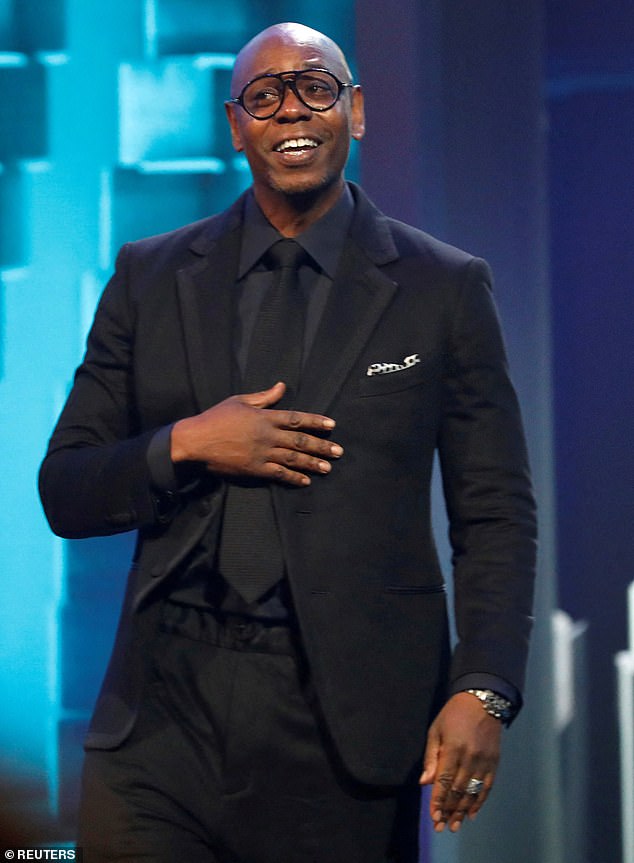 Dave Chappelle confronted the backlash to his past transphobic jokes on his podcast, where he compared being called a transphobe to being called the N-word and described the violence from protesters at his shows who accused him of harming them with his transphobic comments.

The comedian’s show in Minneapolis last summer was forced to change venues because of the backlash from the community. And while Chappelle was met with fans and a standing ovation at the Varsity Theater, he was also met with violent protesters.

In the latest episode of his podcast, ‘The Midnight Miracle’ podcast with co-hosts Talib Kweli and Yasiin Bey, Chapelle said the protesters threw eggs at him, yelled for him to go home and even threw a barricade at the crowd.

He pointed out the hypocrisy of protesters who have blamed transphobes and those speaking out against trans for recent violence against the trans community, yet are now causing violence themselves.

Chappelle drew a backlash in 2021 for material in his Netflix comedy special ‘The Closer’ that some in the LGBTQ+ community said ridiculed transgender people. His supporters viewed it as a cry against cancel culture.

Comedian Dave Chappelle confronted the backlash to his transphobic jokes on his podcast, ‘The Midnight Miracle’ describing how violent protesters threw eggs and a barricade at the crowd outside his show in Minneapolis last summer 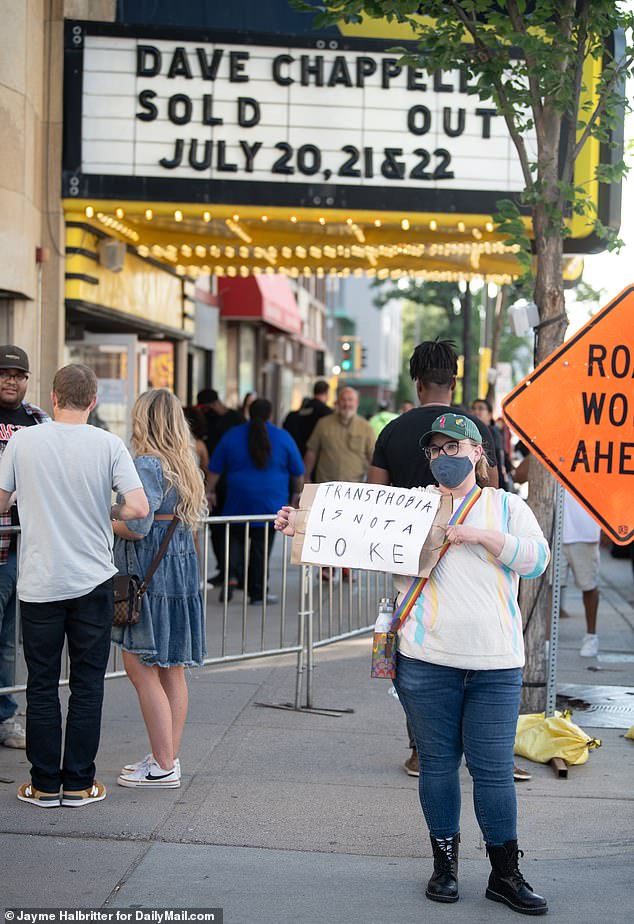 Chappelle’s show at Minneapolis’ First Avenue club in July was canceled with the venue apologizing to the community for booking him and vowing to keep the club a ‘safe space.’

‘I guess apparently they had made a pledge to the public at large that they would make their club a safe space for all people, and that they would ban anything they deemed transphobic,’ Chappelle said on the podcast. ‘This is a wild stance for an artistic venue to take, especially one that’s historically a punk rock venue.’

Yet, when his show was rescheduled for the Varsity Theater, large groups of protesters swarmed the outside of the venue and became violent.

‘They was doing all that s–t. Throwing eggs, and they had this rallying cry: they go, ‘Go home transphobe.’ They kept saying that: ‘Go home, transphobe,’ and ‘f–k you, transphobe.’ It was really confusing, but if you replace the word transphobe for n—– it makes perfect sense.’

Chappelle then talked about a protester who threw a police barricade into the crowd.

‘One lady was so mad with the protesters, she picked up a police barricade,’ Chappelle added. ‘You ever seen one? They look like a bike rack. This bitch picked that barricade up by herself and and threw it at the crowd. I gotta tell you, it’s an amazing feat of strength for a woman.’

But Chappelle said the protesters did not succeed in getting his show canceled. Instead, when he walked on stage, he was greeted with a standing ovation.

‘When I walked on stage, it was a huge ovation because suddenly going to see a comedy show was this huge act of defiance,’ Chappelle said.

‘I don’t think anyone had any malicious intent. In fact, one of the things that these people, the trans and their surrogates, always say is that my jokes are somehow gonna be the root cause of some impending violence that they feel like is inevitable for my jokes.

But I gotta tell you, as abrasive as they were, the way they were protesting, throwing eggs at people, throwing barricades, cussing and screaming, [none of my fans] beat ’em up. In fact, the people in the crowd would just say, ‘We love you. Like what are you talking about?” 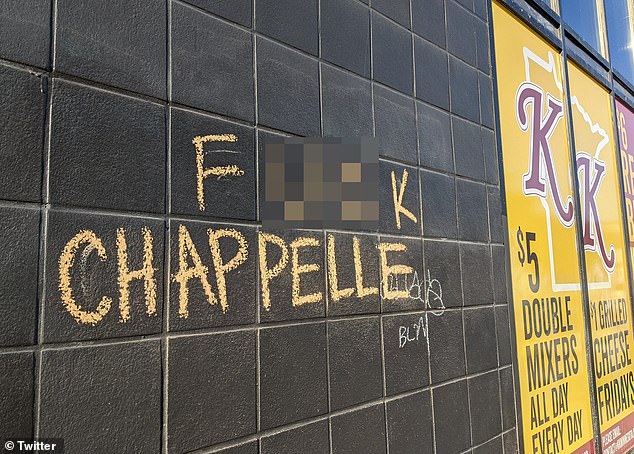 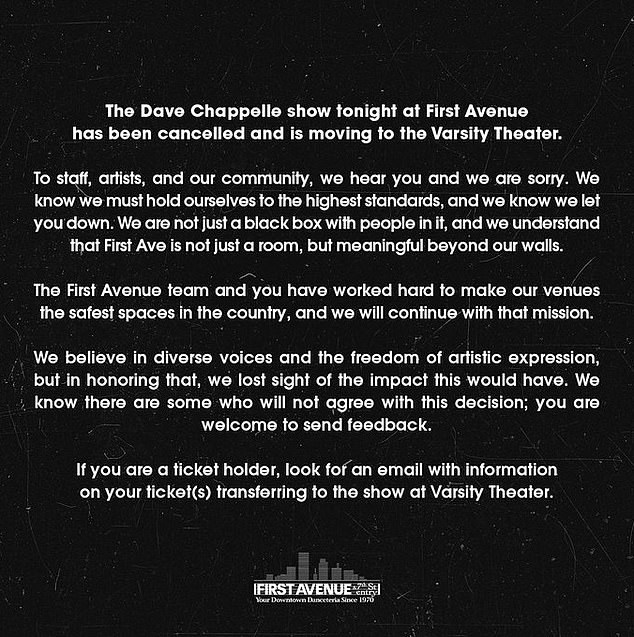 Chappelle said: ‘I guess apparently they had made a pledge to the public at large that they would make their club a safe space for all people, and that they would ban anything they deemed transphobic. This is a wild stance for an artistic venue to take, especially one that’s historically a punk rock venue’ 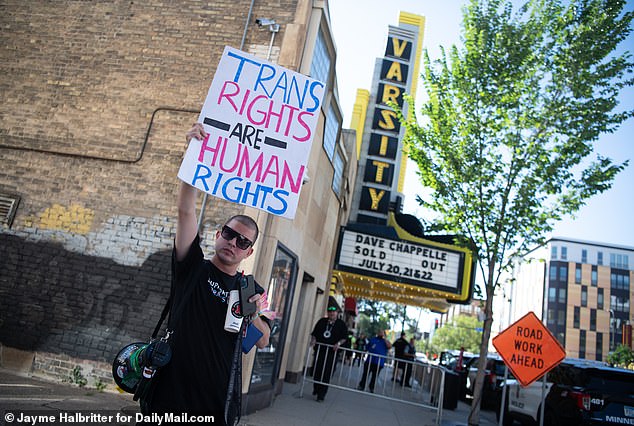 When Chappelle’s show was rescheduled for the Varsity Theater, large groups of protesters swarmed the outside of the venue and became violent 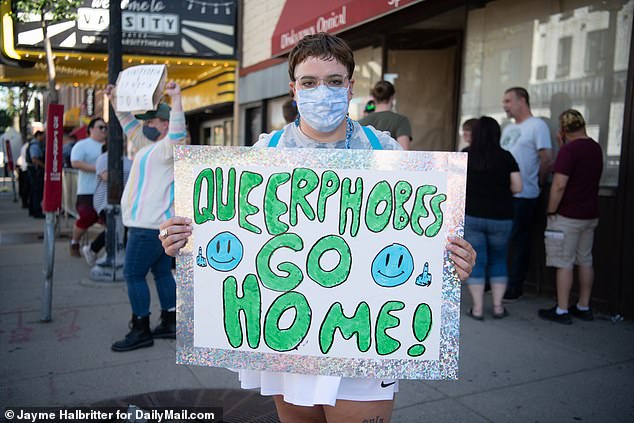 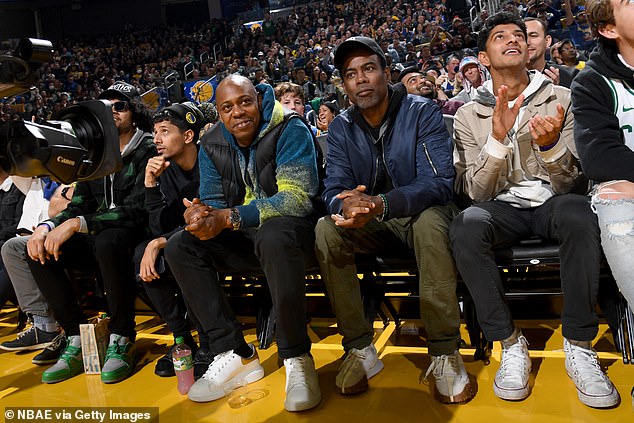 Chapelle, pictured here with Chris Rock at the Boston Celtics and Golden State Warriors game in December, said he has faced backlash for what many precieve as anti-trans jokes

Chappelle continued his argument by saying that he’s not mad that the groups take issue with his work, but that ‘because they don’t like it, I’m not allowed to say it.’

‘Now I have a belief that the gay community is not monolithic, and I think that in regards to me, that there’s probably a variety of opinions throughout that,’ he said. ‘But there’s a thing they do where they deliberately obscure what I think they believe is the intent of my work to make a moment of it that I don’t know that the work necessarily merits. You know what I mean?’

Chappelle continued: ‘I’m not even mad that they take issue with my work. Good, fine. Who cares? What I take issue with is the idea that because they don’t like it, I’m not allowed to say it.’

‘Art is a nuanced endeavor,’ he added. ‘I have a belief that they are trying to take the nuance out of speech in American culture, that they’re making people speak as if they’re either on the right or the left. Everything seems absolute, and any opinion I respect is way more nuanced than these binary choices they keep putting in front of us. I don’t see the world in red or blue.’

‘Trying to silence a person like me, I don’t think it has anything to do with being loved,’ Chapelle said. 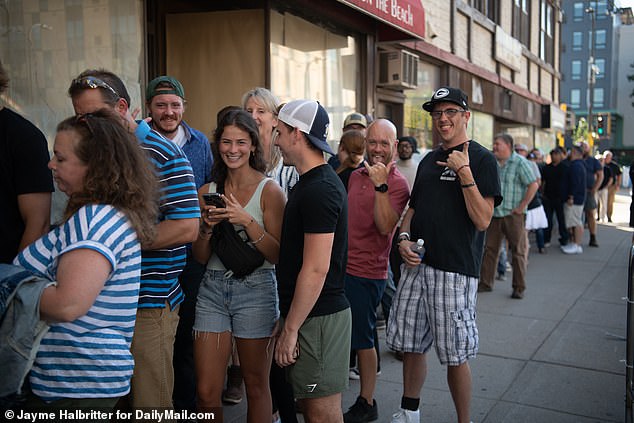 Chappelle said the protesters did not succeed in getting his show canceled. Instead, there were long lines of fans and when he walked on stage, he was greeted with a standing ovation 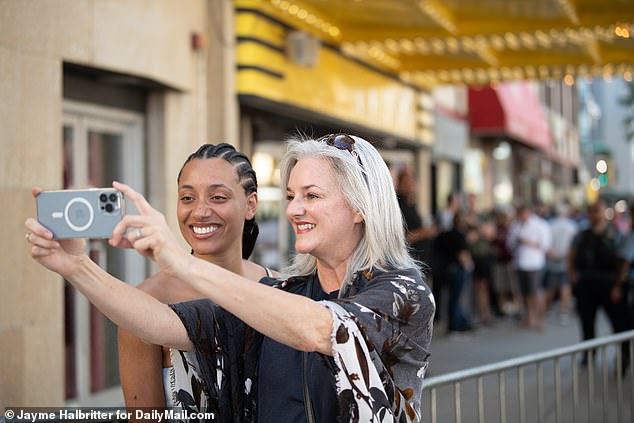 Chappelle generated anger last year after the October release of The Closer, which included remarks about the transgender community and prompted swift backlash from offended onlookers and even staffers at Netflix, which in recent years aired a slew of the comic’s specials.

The backlash included a staged walkout from employees at Netflix’s LA HQ, after the streaming giant’s CEO Ted Sarandos defended Chappelle’s jokes as artistic expression and nothing more than an example of the comedian’s ‘creative freedom.’

The special even spurred a response from transgender star Caitlyn Jenner, who also defended the comedian for his comments.

He also joked women are entitled to feel anger toward trans women, since Jenner won Glamour magazine’s 2015 Woman of the Year award.

‘I’d be mad as sh*t if I was a woman,’ Chappelle sarcastically says in one bit that had been deemed problematic.

The star also joked about the anatomy of trans women, joking they lacked real female reproductive organs and that they did not have blood but ‘beet juice.’

The comic, who has continued to produce content for Netflix over the past year despite the backlash, has since refused to defend his remarks, saying they were clearly made in jest, while also pointing to his status as a standup comedian – a job that is likely to often offend at least some. 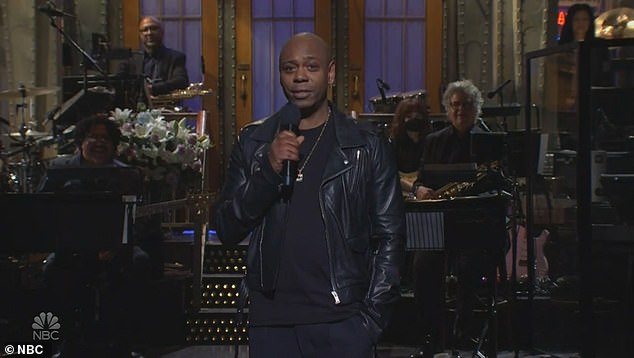 When Chappelle appeared on SNL in November, he declined to discuss is controversial jokes, but instead spent the first part of his monologue on Kanye West’s recent antisemitic remarks 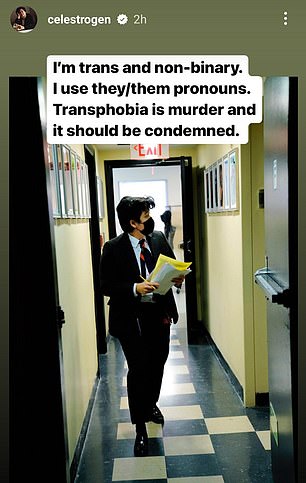 After the announcement that Chappelle would be hosting, non-binary SNL writer Celeste Yim posted this to their Instagram

This increasingly political correct climate has since become a pronounced topic in Chappelle’s material – though, notably, his sets, while still rife with his trademark tongue-in-cheek observations, have become markedly more toned down since The Closer.

When he appeared on SNL in November, he declined to discuss anything related to his jokes which drew controversy – but seemed to allude to them somewhat heavy-handedly with his material, which largely focused on topics that underpin enduring stereotypes – antisemitic and otherwise.

The appearance was Chappelle’s third-ever on the show, following a 2016 appearance and return to the show in 2020, during an episode that saw him lambaste a then ousted President Trump following that year’s presidential election.

Ahead of that performance, SNL staff members, seemingly still irate over the comic’s past material, threatened to boycott the episode – but ultimately did not make good on those threats.

One took to Instagram to argue ‘transphobia is murder and it should be condemned’ after Chappelle’s slot was announced, while others were rumored to be furious the show runners chose the controversial comedian.

Dave Chappelle became the woke mob’s target in 2021 after appearing in a Netflix stand-up special called The Closer.

He joked that like J.K. Rowling – who was eviscerated for sharing her view on the subject – he too was a ‘TERF’ – a trans-exclusionary radical feminist.

Chappelle had also claimed that gender was a ‘fact’.

He was eviscerated by activists calling for a boycott and claiming he was ‘harmful’ to them.

However many in the trans community said they had no problem with the jokes, and that the faux-outrage was largely leveled by cisgender people.

Among those who jumped to Chappelle’s defense was the family of the late trans comedian Daphne Dorman, who killed herself in 2019.

‘Daphne was in awe of Dave’s graciousness.

‘She did not find his jokes rude, crude, off-coloring, off-putting, anything. She thought his jokes were funny. Daphne understood humor and comedy—she was not offended. Why would her family be offended?’

‘Dave loved my sister and is an LGBTQ ally. ‘His entire set was begging to end this very situation,’ her family said.

Chappelle later offered to meet with critics and Netflix staff who had complained about the show.

‘It’s been said in the press that I was invited to speak with transgender employees at Netflix and I refused.

‘That is not true. If they had invited me I would’ve accepted, although I am confused about what we’re speaking about,’ he said.

George Clooney wraps his arm around wife Amal at the premiere of his film Ticket to...

Author Susan Meachen who faked her own death left red flags she was still...