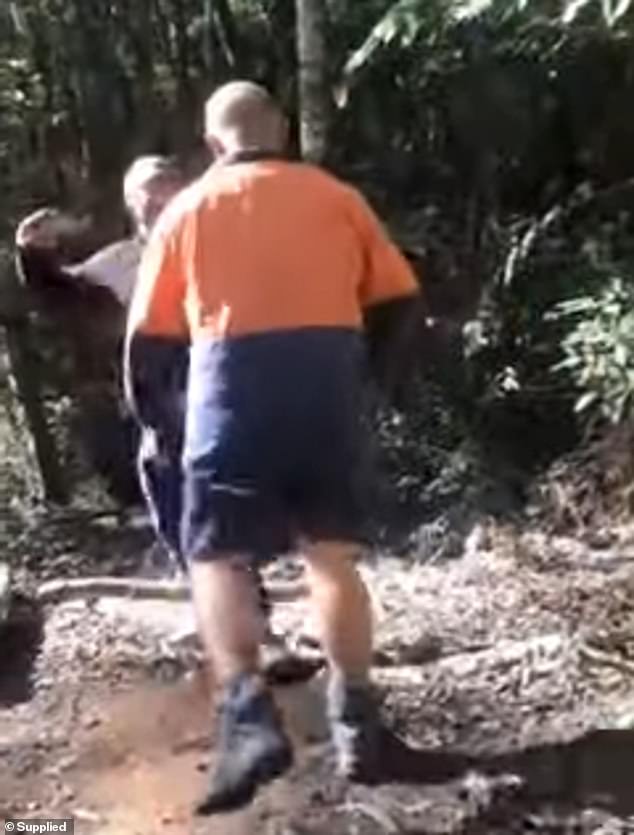 An environmentalist who was manhandled by loggers claims he is being targeted by police after he posted a video of the fiery scuffle.

Mr Graham now claims he is the target of a ‘police hit’ following his arrest two weeks after he published a video of the stoush online in August this year.

However, NSW police say the arrest stems from Mr Graham’s ‘illegal protest action’ in national parks in August and September this year.

In the video, Mr Johnston speaks to the woman recording – an employee from the state-owned Forestry Corporation – before the loggers, who are contracted by Forestry, physically confront him and Mr Graham.

The scuffle starts when Mr Graham walks out of the bush as he holds his phone up.

‘How we going? How are you? Hello,’ Mr Graham is heard saying.

He is then confronted by one of the contractors, who appears to try to snatch his phone.

The video shows the logger grabbing Mr Graham by his shirt before forcing him against a vehicle and asking one of his colleagues to ‘get the f***ing phone’.

The contractor then pulls Mr Graham off the vehicle and forces him against it again as Mr Graham hands his phone to Mr Johnston and tells him to keep filming.

‘I’ll give you a f***ing kick to the mouth, you understand me?’ the contractor says.

Mr Johnston begins to video the attack before the woman tells him to stop recording. 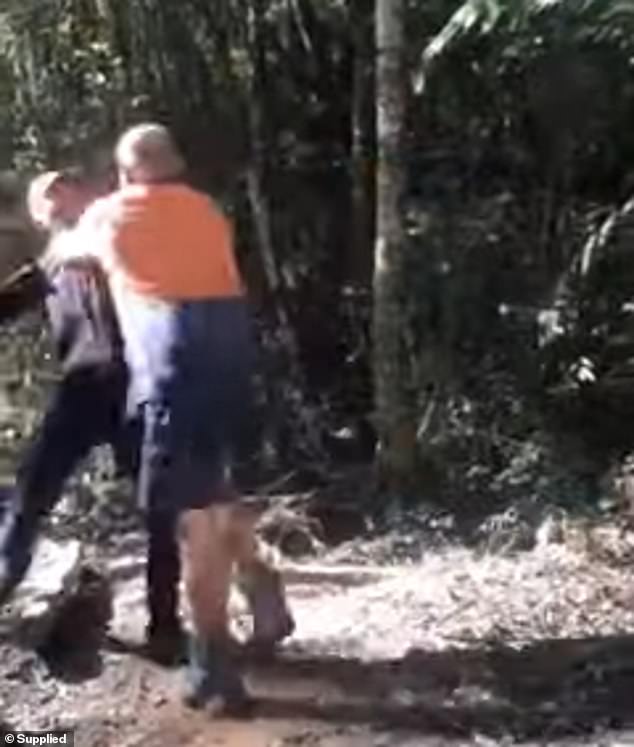 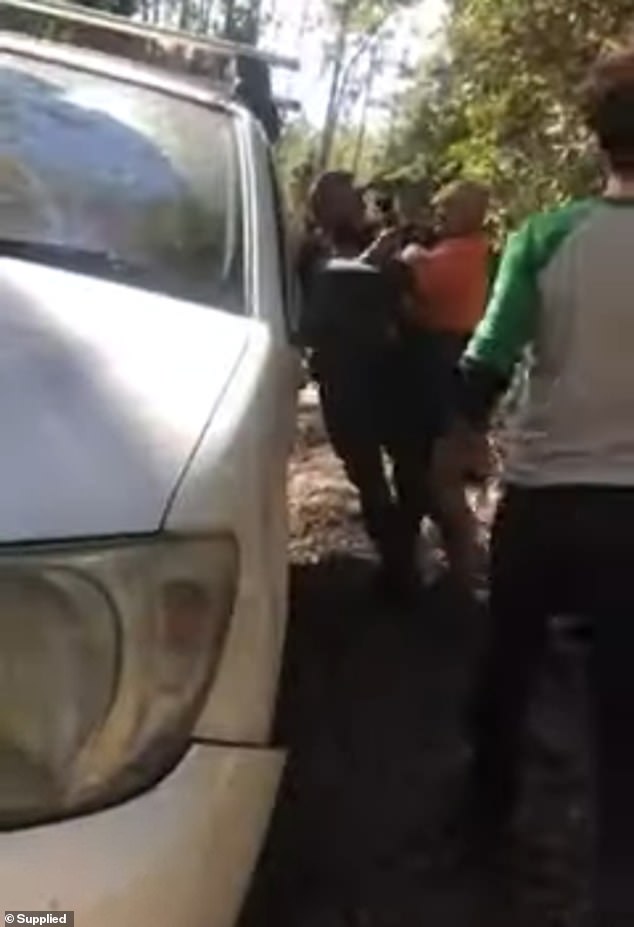 The contractor continues to hold Mr Graham against the side of the vehicle as another logger forces Mr Johnston to the ground.

The contractor continues to hold Mr Graham against the side of the vehicle as another logger forces Mr Johnston to the ground.

‘Give me the f***king phone c**t,’ the logger says as he stands over Mr Johnston.

The logger asks Mr Johnston why he was taking photos before he and another contractor demand he to give them Mr Graham’s phone.

One of the loggers then tells the two men to ‘get out of the f***king place’.

As Mr Graham and Mr Johnston leave the area, one of the contractors hits Mr Johnston in the head.

Those charges were dropped in May this year with the police investigation now subject to an internal review.

A police report obtained by Daily Mail Australia shows Senior Constable Wade Goddard took charge of the matter, interviewing both men, the contractors and the woman who recorded the incident, and watched the footage.

Sen-Constable Goddard referred to Mr Graham throughout the report as an ‘activist’ and ‘protester’ and described him as arrogant.

He did not charge the contractors or the woman who filmed the video.

Mr Graham said he and Mr Johnston were in the national park at the time as part of his ecology work.

He said the pair were driving down Moses Rock Road, which was ‘legally able to be accessed by the public’.

Mr Graham said he pulled over to the side of the road to urinate and take pictures of the forest when the woman recording the video and the contractors, who were conducting a harvesting operation nearby, followed them and parked them in.

‘(The woman) had driven her vehicle in front of mine. Another cruiser manned by (contractors) parked behind me,’ he said.

‘I had no idea who these guys were (following me).’ 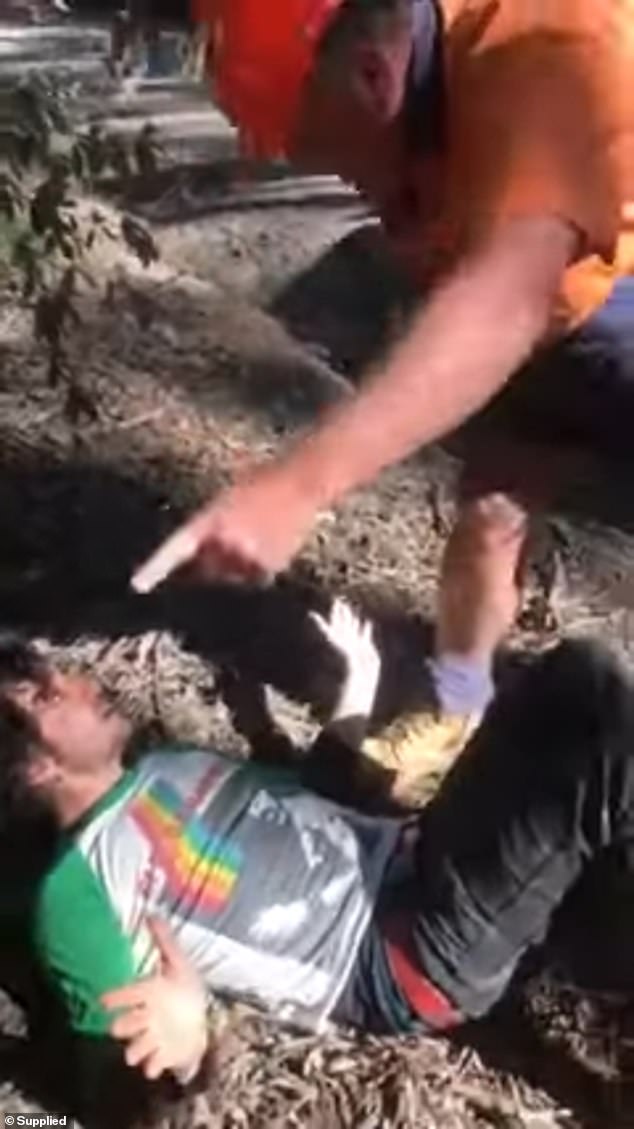 After Mr Graham handed the phone to Mr Johnston, one of the loggers forced Mr Johnston to the ground and demanded he relinquish it before hitting him 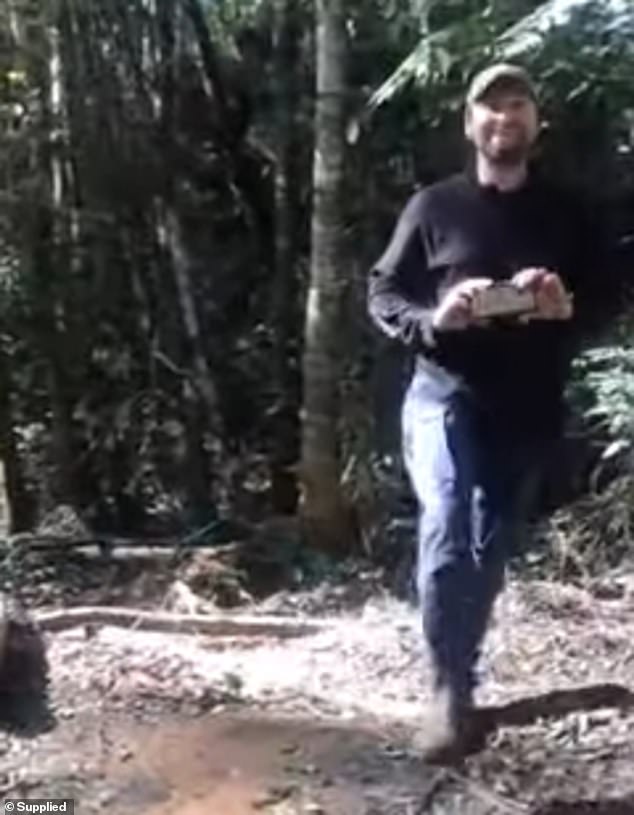 Mr Graham told Daily Mail Australia that he was driving down a road and pulled over the side to take photos and urinate. He alleged that the contractors had followed him and parked him in to prevent him from leaving the area

Mr Graham said he had noticed a logging operation taking place but claimed he was much further away than 100metres.

In fighting the infringement notice through the courts, Mr Graham was eventually given access to the video.

‘I litigated at great expense over the course of 18 months to defend myself, that’s how I was able to get the video,’ he said.

Mr Graham posted the footage on YouTube on August 27.

He was then arrested at Ellis State Forest on September 8.

He was put under strict bail conditions including not being able to use any social media platform or enter any state forest in NSW, and is fighting the charges in court.

A NSW Police spokesperson said Mr Graham’s arrest related to ‘multiple reports’ of protests in the Ellis and Bagawa state forests in August and September.

‘He was charged with nine offences relating to entering forestry area in contravention of displayed notice; as well as stalk/intimidate intend fear of physical harm, and resist officer in execution of duty,’ the spokesperson said.

The spokesperson said senior officers had ‘ordered an immediate review and investigation into the alleged assault’ in 2020. 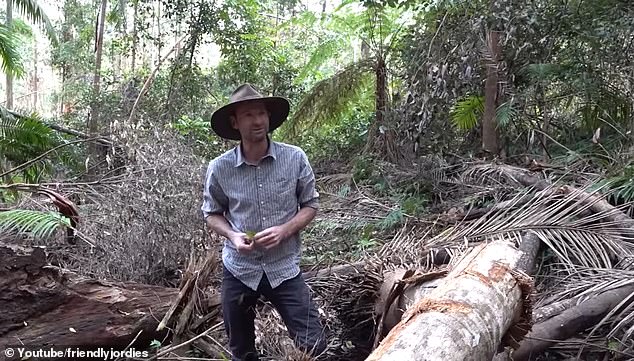 The ecologist was issued for being within 100metres of harvesting equipment, which was dropped in May this year 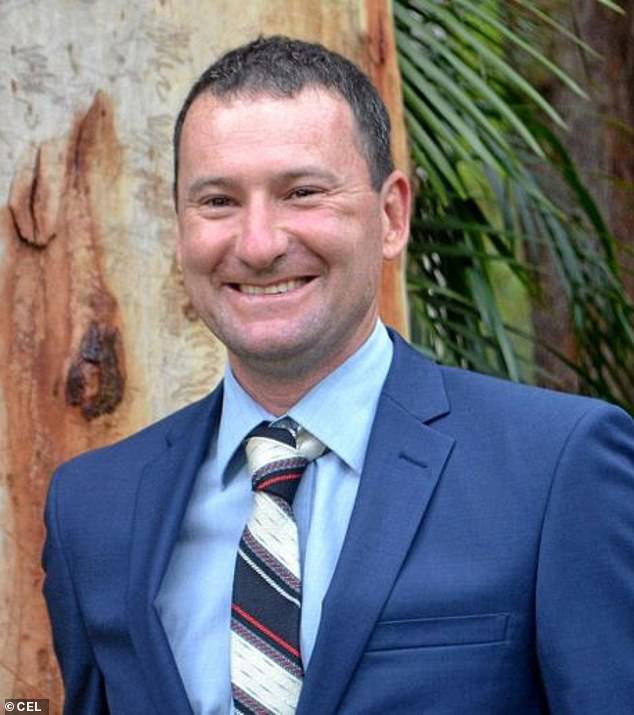 The police spokesperson said the initial investigation and actions by Sen-Constable Goddard was now under ‘internal review’ and that he had since left the force.

‘That officer left the NSWPF earlier this year under the Optional Disengagement Scheme,’ they said.

Forestry Corporation told Daily Mail Australia that they were aware of the loggers confronting Mark and Andre and disapproved of their actions.

‘Forestry Corporation is aware of the incident from 2020 at Wild Cattle Creek State Forest between contractors and a community member on an active worksite in close proximity to harvesting operations,’ a statement read.

‘These worksites have many hazards and it is extremely unsafe to enter an active worksite.

‘The content in the footage is not the behaviour expected of our contractors. As soon as this was brought to our attention, we referred it to the NSW Police to investigate.’

A Guide To Creating A Healthier You