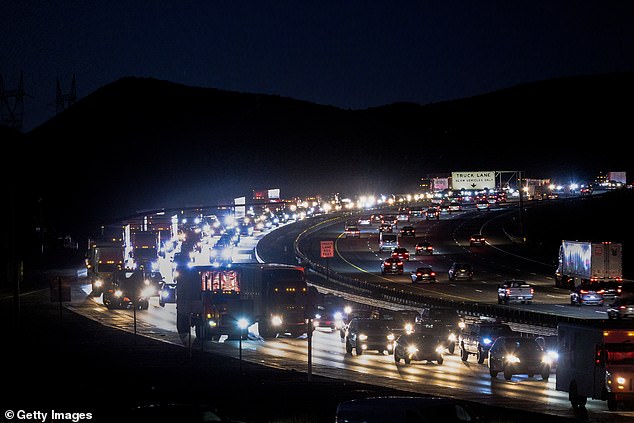 ‘I need help – dad is trying to take me to Vegas’: Officials rescue quick-thinking boy, 12, who called 911 after his father picked him up unannounced from a party then ‘drunk drove’ on freeway

His dad was drunk driving on the freeway, he said. But it wasn’t just any road trip — he was on the way to Las Vegas, a four-hour drive away.

The boy, identified only as Ayden, told the dispatchers that his dad had shown up unannounced from a birthday party and told them he was taking him to the park.

‘I need help… my dad is trying to take me to Vegas. He’s acting weird,’ Ayden was heard telling 911 dispatchers in a phone call heard by KTLA.

File photo: The freeway leading from LA to Vegas is pictured. Emergency responders had to stay on the phone for over an hour with a 12-year-old boy who told them his dad was drunk and driving him to Vegas 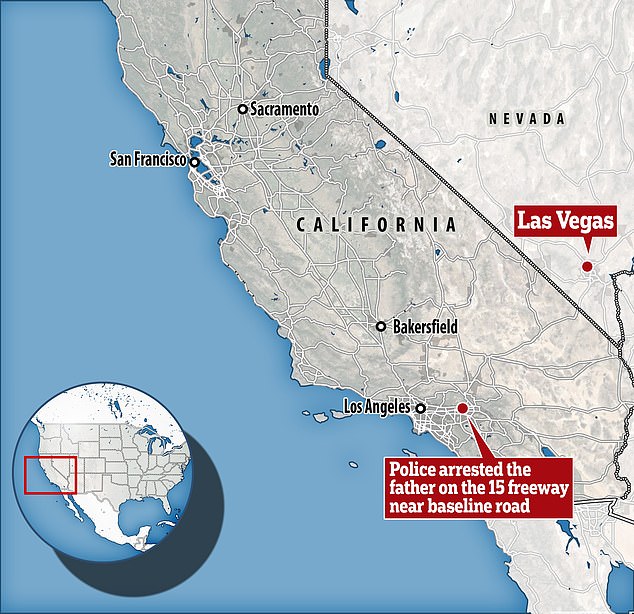 The route shows the road to Las Vegas from Los Angeles, and the spot of the dad’s arrest

Ayden’s dad sped down the freeway while wearing a Las Vegas Raiders football helmet, swerving as he went.

‘Are you guys at a house or in front of a business?’ the dispatcher asked during the call.

‘We’re in the freeway,’ Ayden replied.

They stayed on the phone for more than an hour while Ayden’s father continued to swerve across the road.

The boy remained level headed throughout the incident, which happened on October 26, calmly describing his surrounding to help police identify them.

The Toyota Camry, moving through heavy traffic, had Las Vegas Raiders plates and was missing license number missing — making it difficult for emergency responders to track down the vehicle.

Acting on the advice of responders, Ayden stuck his arm out the car window and waved to the police, who finally found them.

After spotting the waving hand, the authorities pulled over Ayden’s dad on the 15 Freeway near Baseline Road on the way to Vegas.

Police took the dad into custody and charged him with DUI and child endangerment, returning Ayden home safely.

It is not clear what Ayden’s dad had planned for their impromptu trip to Vegas or what prompted him to drive there.