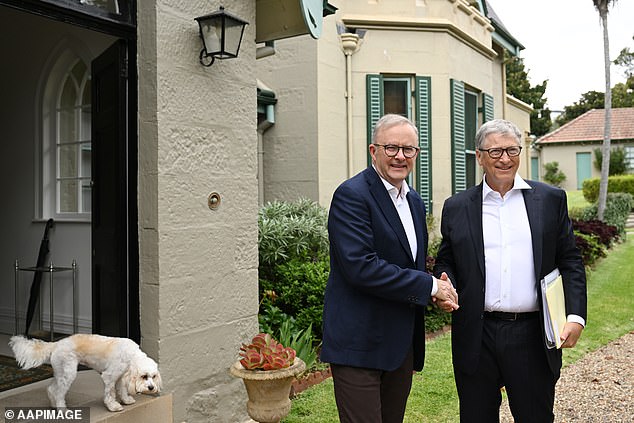 Mr Albanese – and his dog Toto – greeted the billionaire at the prime minister’s official residence in Sydney on Sunday.

It marked the first time the pair have ever met with the two discussing pressing issues including climate change, renewable energy and vaccines overseas.

Mr Gates said he loved visiting Australia while Mr Albanese said he ‘admired’ the philanthropy being done by the tech billionaire.

‘Can I welcome you here very much – we haven’t met before, but I’ve admired your work and your contribution not just financially but in raising debates, including the need to deal with health issues,’ the prime minister said.

‘We have just been through the pandemic, but we need to prepare for future health challenges – and the work that’s being done on eradicating malaria and other diseases in our region is very important.’

Mr Gates is visiting Australia with the Gates Foundation and representatives from his Breakthrough Energy company, which drives innovation in sustainable energy and in technology to reduce greenhouse gas emissions.

‘My government was elected on a platform of taking climate change seriously – we introduced the first legislative caps of 43 per cent by 2030 and net zero by 2050,’ the prime minister said.

‘We are engaged in setting a whole range of mechanisms that will drive private sector investment through. 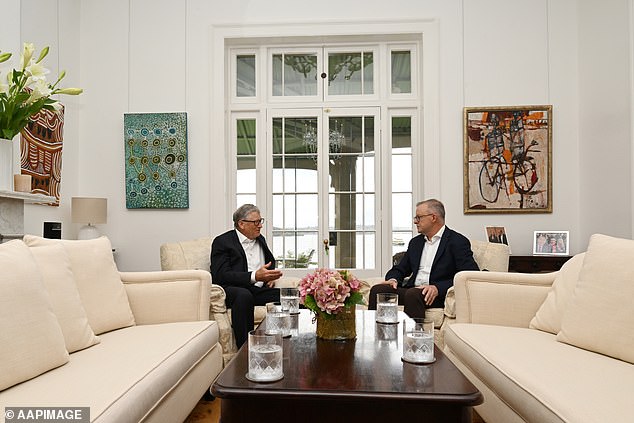 It marked the first time the pair have ever met with the two discussing pressing issues including climate change, renewable energy and vaccines overseas

‘Here in Australia the business community was well ahead of the government in action and now we are working with all the state and territory governments as well as the private sector in driving that change through.’

Mr Gates thanked the prime minister for his ‘great partnership’ on international health issues, including the Global Fund to Fight AIDS, tuberculosis and malaria.

‘A lot to do there as you say, the preparedness for the next pandemic is still a discussion that hasn’t been figured out,’ he said.

‘Malaria in the long run we want to do the same thing we have done with polio which is eradicate it regionally then eradicate it all over the world.

‘Both the foundation and Breakthrough Energy are excited about the things we can do together.’

Heidi Klum transforms into worm for her Halloween party but gets upstaged by daughter...