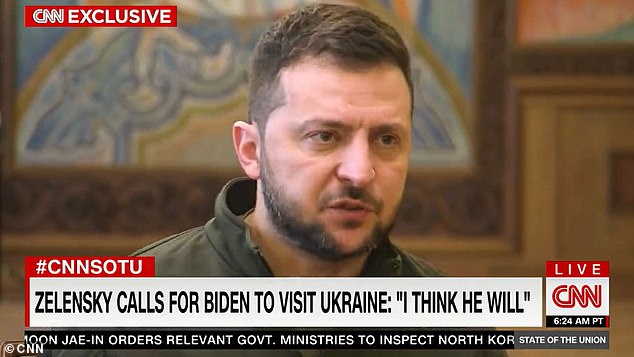 Ukrainian President Volodymyr Zelensky on Sunday called for US President Joe Biden to visit his country, and said he believes the commander-in-chief will make the trip.

Zelensky was asked by CNN State of the Union host Jake Tapper about whether there are ‘any plans’ for Biden to come see the situation for himself.

‘I think he will,’ the Ukrainian president answered.

He quickly added: ‘It’s his decision of course, and about the safety situation.’

‘But I think he’s the leader of the United States, and that’s why he should come here to see.’

Late last week Biden confirmed that his administration was discussing a possible Kyiv trip by a senior official and was ‘making that decision now.’ He told reporters that he wanted to go himself.

White House Press Secretary Jen Psaki backtracked on the president’s comment just hours later during a taping of the Pod Save America Podcast.

Psaki said it’s true Biden was ‘ready to go.’ But, she added, ‘we are not sending the president to Ukraine’ — a policy line that senior administration officials have held consistently through Russia’s war. 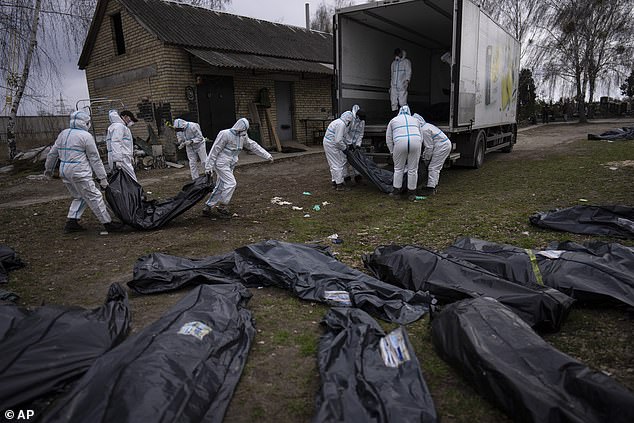 Volunteers load bodies of civilians killed in Bucha onto a truck to be taken to a morgue for investigation. Zelensky said there is ‘substantial evidence’ of genocide there and other towns around Ukraine

It comes after a slew of NATO leaders descended upon Kyiv in recent weeks, some even seeing the horrors found in the capital’s suburbs after Kremlin troops’ retreat firsthand.

‘I have the same opinion as President Biden, and I immediately saw what was happening here. Especially what happened in Bucha and in the east of our country,’ Zelensky said in his Sunday interview.

‘I speak about this because Russia calls it a military operation, and not a war. But look what happened in Bucha. It’s clear that is not even a war — it’s a genocide.’ 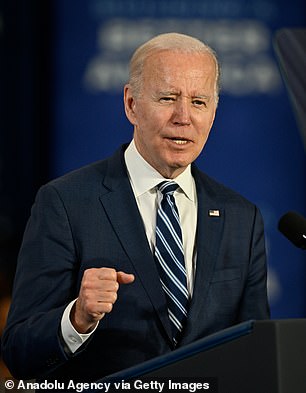 Biden has on multiple occasions expressed interest in visiting Ukraine, though his officials have backtracked each time

Scenes of devastation and carnage were revealed to the world as Russian troops retreated from Kyiv’s suburbs, with western intelligence pointing to an aim of regrouping to take over Ukraine’s east.

‘They just shot people in the streets. People were riding bicycles, taking the bus, or just walking down the street. There were corpses lying in the streets. These were not soldiers. They were civilians,’ Zelensky fumed.

‘They bound their hands. They forced children to watch as they raped their mothers. Then they threw them in a well or in mass graves, children, adults, the elderly.’

He continued, ‘We have substantial evidence that points to this being a genocide, audio and video where they talk about just how much they hate us.’

Zelensky said he was caught off guard by the magnitude of the hatred he felt.

‘I did not even know that there was such hatred of the Russian military for the Ukrainian people,’ Kyiv’s leader said.

‘They say they’re going to destroy us. Just to steal a toilet and a washing machine from an apartment, they shot an entire family. That is genocide.’

The heads of Lithuania, Latvia, Poland and Estonia took a train to Kyiv last week where they met with Zelensky.

And earlier this month, the UK’s Johnson stunned the world by appearing in Kyiv with Zelensky, after a secretly-planned train trip to the war-damaged capital city. 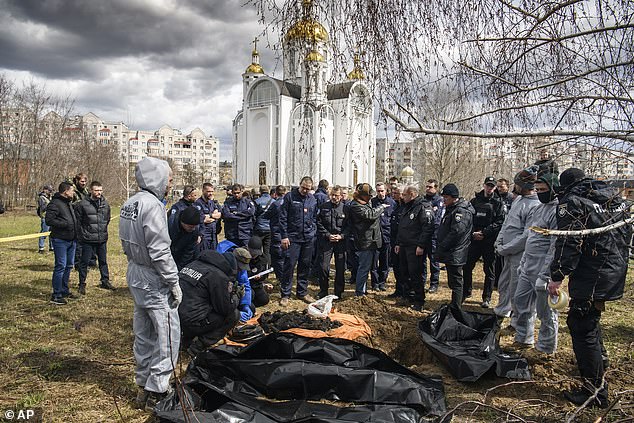 ‘They just shot people in the streets. People were riding bicycles, taking the bus, or just walking down the street. There were corpses lying in the streets. These were not soldiers. They were civilians,’ Zelensky fumed 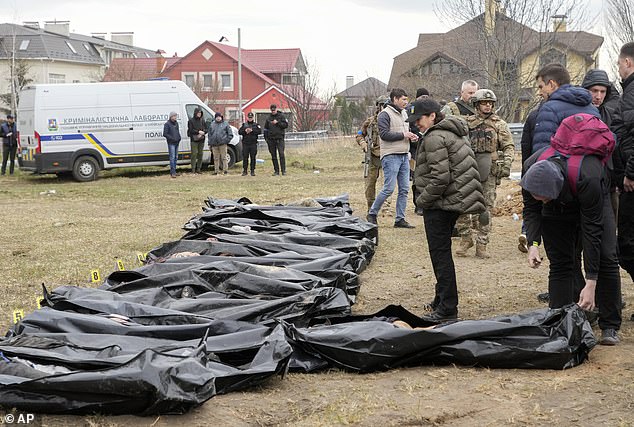 ‘I did not even know that there was such hatred of the Russian military for the Ukrainian people,’ Kyiv’s leader said

“I think he’s the leader of the United states and that’s why he should come here to see.” https://t.co/APkpjZFG6O

The recent spate of trips put renewed scrutiny on Biden, who said during a late March visit to Warsaw that ‘they will not let me, understandably, I guess, cross the border and take a look at what’s going on in Ukraine.’

Last Sunday, both Psaki and Biden’s National Security Adviser Jake Sullivan were forced to repeat that a Biden trip to Ukraine was off the table.

In addition to extending an invitation to the US president, Zelensky told CNN he would also like French President Emmanuel Macron to visit.

Macron recently came out against Biden calling Putin’s actions a ‘genocide,’ claiming it was a counter-productive ‘escalation.’

‘I talked to him yesterday,’ Zelensky said of France’s leader. ‘I think he wants to take some steps to ensure that Russia engages in dialogue.’

‘I just told him that I want him to understand that this is not war, but nothing other than genocide. I invited him to come when he will have the opportunity. He will come and see, and I’m sure he will understand.’

Zelensky also said Sunday that he was ‘happy’ with Biden’s recent greenlighting of $800 million in weapons aid to Ukraine but ‘of course we need more.’

‘There will never be enough. Enough isn’t possible. there is a full scale war ongoing today. So we still need a lot more than what we have today,’ Zelensky said.

He also admitted, ‘It’s been very, very difficult. Because there aren’t many countries that have really helped us.’

In the nearly two month-long invasion, more than 10 million Ukrainians have been forced to flee their homes. The majority have been women, children and the elderly.

Zelensky urged those vulnerable groups not to return yet, even as reports indicate some traffic headed back to Kyiv as people desperately look for what’s left of their homes after Russia’s retreat.

‘I think not now. First of all, it’s about women and children. They should come when the situation will be stabilized and when the war will finish, of course, because they will not help us now,’ the leader said.

In other places where Russians took over before many were able to flee — like the besieged city of Mariupol — Zelensky claimed as many as 5,000 Ukrainian children were forcibly deported to Russia.

‘Several thousand, tens of thousands were forced to evacuate in the direction of the Russian Federation. And we do not know where they are. They have left no document trail. And among them are several thousands of children,’ Zelensky said,

‘We have information that perhaps 10,000 people have died there, all civilians who stayed. We’re talking about civilian deaths, not military. About 5,000 children deported from this region to Russian side, because they didn’t allow them to go to the Ukrainian side.’

Biden slams GOP for trying to ban sex changes for children in interview with...

Children In Need 2022: Mimi Webb kicks off the show with incredible performance