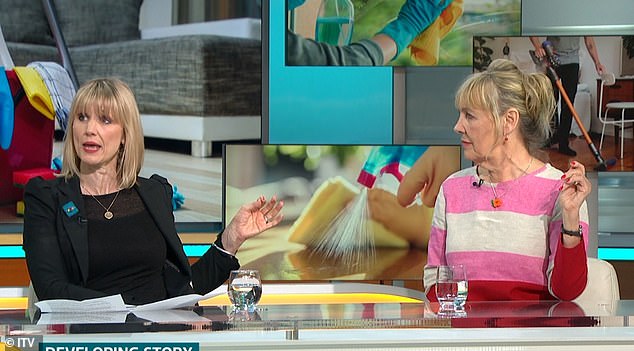 Richard Madely has branded a proposal to make it a criminal offence to not do household chores as ‘absolute nonsense’.

Starting the discussion, Richard’s co-host Ranvir Singh explained that almost half of French people back a proposal to make it a criminal offence to avoid doing household chores.

The legalisation was proposed last month by feminist politician Sandrine Rousseau, with French pollsters since discovering 14 per cent of the public would be prepared to file a criminal lawsuit against their spouses for failing to do their share of the housework.

A furious debate erupted on ITV’s Good Morning Britain today as historian Dr Tessa Dunlop (left) suggested legislation could help balance the burden of domestic labour, which often falls on women. The panel were joined by cleaning expert Aggie Mackenzie (right) who argued that it was ‘education’ not ‘legalisation’ that was needed. 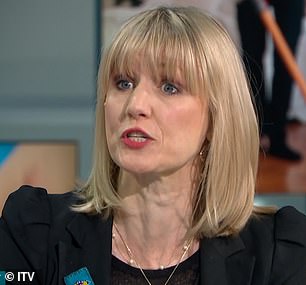 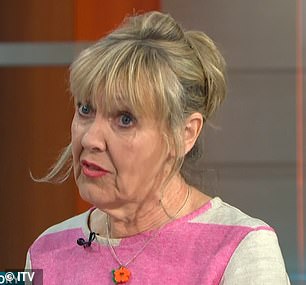 ‘The point that’s being made is that we’ve hardly seen an increase  in men doing chores since 1970s. Men only do 14 minutes more of household chores now that in 1970, if we keep going at this rate it will take 6,500 minutes to achieve equality,’ Ranvir suggested.

But Richard quickly responded arguing: ‘We’re talking about this being a criminal offence. This is absolute nonsense, to drag a man or a woman into court because they don’t do the washing up!’

The panel were joined by cleaning expert Aggie Mackenzie, who argued that it was ‘education’ not ‘legalisation’ that was needed.

But Dr Tessa Dunlop argued the opposite, saying there are ‘a lot of things legislated within a marriage’.

‘Let’s flip this argument on its head, we enshrined in law the idea of equal pay before I was even born,’ she argued.

‘That was in 1970 and we still haven’t achieved equal pay. Women are still paid 10 per cent less despite our best efforts. All the research says, until you have equality in the domestic space, until men are doing their fair share, it won’t be equal.’ 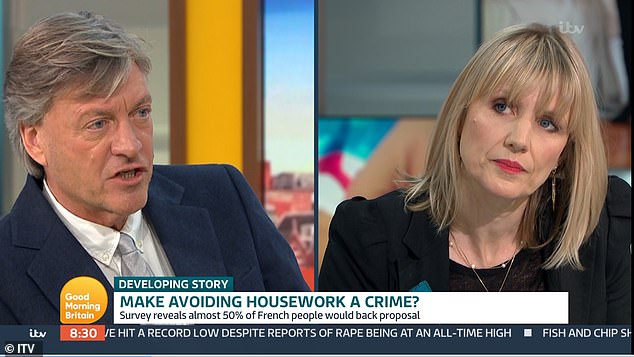 Richard Madely (left)  branded a proposal to make it a criminal offence to not do household chores as ‘absolute nonsense’.

But Richard argued it was a ‘false analogy’.

‘Can you imagine getting nicked and going down to the police station, what would the charge be?’ he added.

Aggie added: ‘And how do you measure it? It’s just crazy. It’s about respecting your partner’.

‘But it’s not simple is it? We haven’t shifted for decades despite all the conversation,’ Tessa added.

‘The statistics say we haven’t shifted. There’s a a massively gender based division of labour. Women do it all, men don’t

‘When I was a child there we got beaten about, they made it illegal in Scotland and now I wouldn’t dream of hitting my three year old, despite her being a pain in the neck and guess what, i do most of the cleaning up after her. 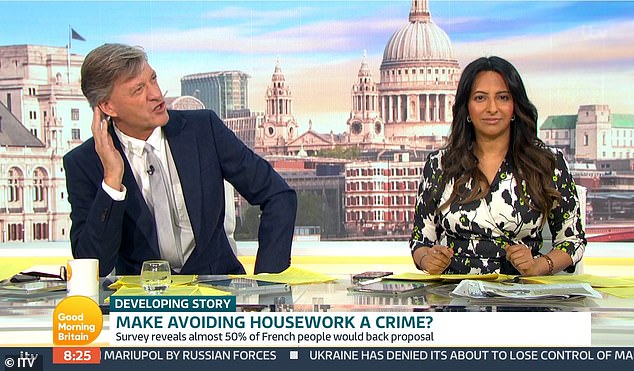 Starting the discussion, Richard’s co-host Ranvir Singh (right) explained that almost half of French people back a proposal to make it a criminal offence to avoid doing household chores.

‘When I get home  this morning, the dishwasher won’t be emptied, there will be dirty dishes over the clean ones.

‘There’s lots of stuff that’s legislated against in a marriage behind closed doors, I don’t think we should shy away  there’s lots of ways you can change behaviour from establishing things in law.

‘Generations older than me – women included – are to blame here because the patriarchy has made us believe men earn the bread and butter’.

Aggie added: ‘We’re talking about men who are doing less than women, but it’s down to mothers to educate their sons. It starts early on, we need to show sons how to clean, how to look after themselves how to be in a clean and just way.

‘We can’ t be taking this to legalisation.  It’s completely bonkers and a waste of police time’.

Viewers were baffled by the proposal, with one writing: ‘Should avoiding housework be a crime? what is the world coming too?’.

‘We’ve got a worker crisis, a labour shortage in this country, women between 18 and 40 are doing £140 billion of unpaid work in the home’.

But Richard argued there were ‘more serious crimes to investigate than men not fluffing up the pillows’ while Aggie added: ‘If you get to the point where you’re using the law, your relationship is over’.

Viewers were baffled by the proposal, with one writing: ‘Should avoiding housework be a crime? what is the world coming too?’.

‘There are too many serious problems in the world, housework division is not one of them,’ said another.

‘I’m a very clean person and hate mess but to make it a criminal offence is ridiculous. Can you imagine?? Also such a waste of police time. And can I say it’s not just men who are untidy!’ wrote a third.

Emma Raducanu is THRASHED 6-1, 6-1 in just 62 MINUTES by Marketa Vondrousova