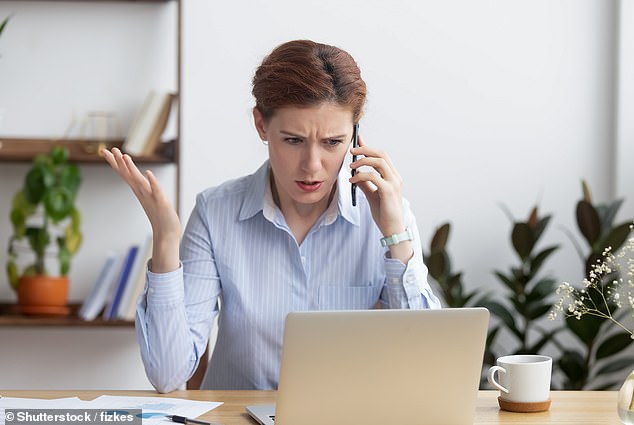 My cleaner refuses to give back my keys after GHOSTING me and now I don’t feel safe in my home – should I get the locks changed?

By Gwyneth Rees for MailOnline

A woman has sparked a furious online debate after revealing her cleaner had ghosted her and hadn’t return her keys.

Taking to British parenting forum Mumsnet, the mother wrote that her cleaner hadn’t turned up since Christmas.

She wrote that she has repeatedly asked for her keys back but is getting ignored.

And she wanted to know whether to ‘out’ the cleaner on Facebook – though some urged against this.

In the original post, the anonymous woman wrote: ‘My cleaner has not been since Christmas.

‘The problem is that she has stopped responding to texts, emails, calls, WhatsApp etc.

She then asks: ‘Am I being unreasonable to start putting messages on local Facebook groups asking? 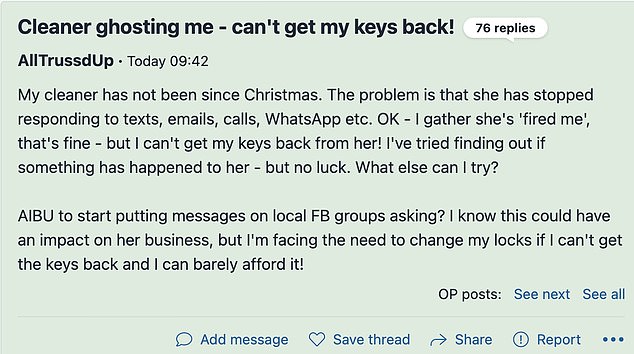 The woman wrote that not knowing where her keys were left her feeling unsafe, especially as crime was rising in her area

‘I know this could have an impact on her business but I’m facing the need to change my locks if I can’t get my keys back and I can barely afford it.’

She added that she found the situation ‘maddening’ and had tried to find out if the cleaner was okay.

But she admitted she was struggling to feel safe in her own home.

She wrote: ‘Last night, [I] was home alone and even with the door locked I didn’t feel secure.’

But many posters urged her not to expose the problem on social media.

One wrote: ‘I personally wouldn’t put a message on Facebook. If she’s been injured… or whatever then you’re no further forward.’

Another questioned: ‘You think she’s gonna come and burgle you just because she has a key?’

To this, the original poster replied: ‘No, I don’t think she’s going to burgle me. But the fact I don’t know where the keys are is a security risk.

‘We live rurally and crime has been rising in isolated properties.

‘I doubt my home insurance would be valid if I didn’t know where all my keys were.’

Another wrote that she needed to send a much more forceful message than just asking politely for her keys back.

They wrote: ‘”Just pop the keys back please” is unlikely to invoke the same sense of urgency in her as “I can’t afford to get the locks changed so I will have to bill you”.’

Some also urged the woman to check up on the cleaner’s business credentials or attempt to seek out a landline number.

While many others said she should get her locks changed regardless.

One wrote: ‘I would get the locks changed in any event. You have no idea if she has made a copy even if you get the key back.

‘I always change the locks if third parties have taken keys and they no longer work for me.’

Another agreed, saying that even if the cleaner eventually returned the keys, she might have left them lying about and someone could have copied them.

Some advised her that it was relatively easy to change the locks or the barrel mechanism in the door, and didn’t cost that much.

But one advised simply to add a bolt and chain to the door – which would help her fell safer when she was inside the property.

Some too reported that they had similar problems with cleaners.

One wrote: Oh my cleaner ghosted me in October too! I didn’t realise this was a thing.

‘Thankfully she didn’t have a key but after a year of coming, I’m baffled as to what has gone on.’

While another wrote her cleaner also refused to return keys.

She added: ‘Ended reporting theft at local police station and got the locks changed very quickly.’

Does zopiclone give you a good sleep?