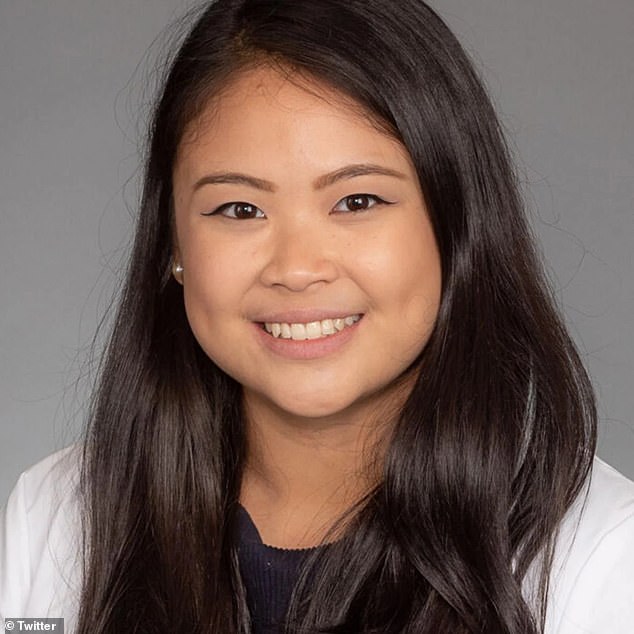 A North Carolina medical school put one of its students ‘on leave’ after she tweeted about purposefully missing a man’s vein while drawing his blood – an act apparently meant to punish the patient, who mocked her for wearing a pronoun badge that said ‘She/Her.’

In a statement, Wake Forest University simply claimed the trainee doctor, Kychelle Del Rosario, had made an ‘inaccurate statement’ on social media.

‘Wake Forest School of Medicine has completed a thorough review of the patient encounter with our medical student who recently made an inaccurate statement on social media,’ the school wrote in a statement to ‘Tucker Carlson Tonight’ producer Gregg Re on Friday.

‘The review determined that the student had no intention to harm the patient and followed Medical Center protocols The School and the student have agreed upon her taking an extended leave. During this time the student will not participate in any patient care activities.’

The university has not stated how long the ‘extended leave’ will be nor have they explained how they determined nature of the stabbing of the patient was accidental.

Wake Forest has also refused to state if the patient involved had been contacted about the incident. 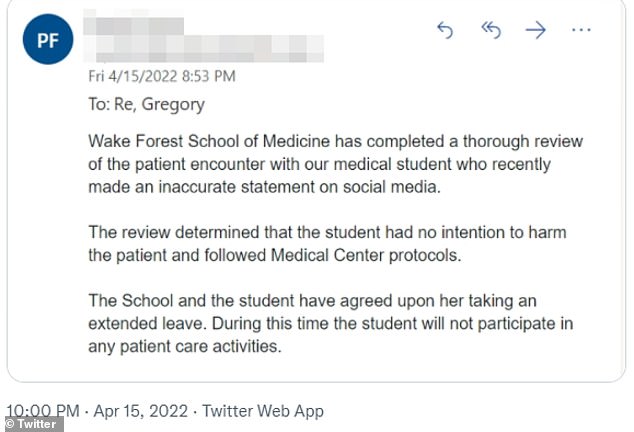 The trainee doctor sparked outrage last month after she implied she had deliberately injured a man who mocked her by missing his vein during a blood draw.

She now claims she did so accidentally, and says a more qualified medical professional made the second blood draw attempt in line with existing procedures.

Wake Forest said an investigation found Del Rosario’s claims on Twitter did not reflect the incident, adding she had followed the guidelines correctly.

They did not comment further on how they had established the facts of the case.

Meanwhile, a statement by the student hinted she would be back working after she had ‘reflected’ on her ‘social media use as a professional’.

The school was condemned for its slowness to respond to the scandal, and has yet to comment on the liability issues it could face if it does let Del Rosario loose again. 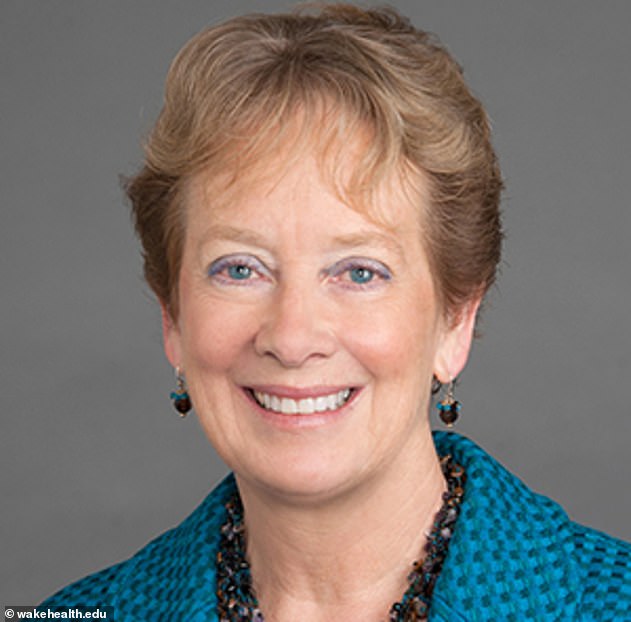 Wake Forest University School of Medicine said an investigation found Del Rosario’s claims on Twitter did not reflect the incident, adding she had followed the guidelines correctly. Above, the school’s Dean, Julie Freischlag 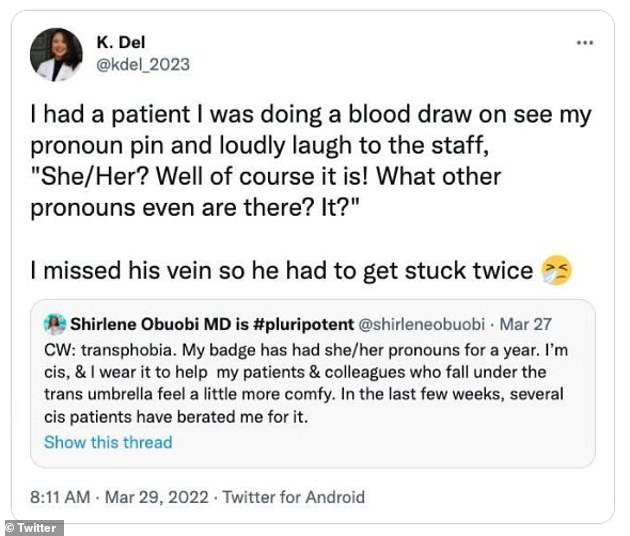 The institution said an investigation found her claims on Twitter (pictured) did not reflect the incident, adding she had followed the guidelines correctly

It comes as fellow students rallied around her and slammed the victim, with another future doctor, Ewen Liu,  even claiming the missed injection was ‘karma-tic’ for him mocking her.

Del Rosario, a fourth-year student, was widely condemned for claiming on Twitter to have purposefully missed the patient’s vein so she would have to jab him twice.

She suggested her attack was justified because the victim – who has not been named – laughed ‘loudly’ at her She/Her pronoun pin.

Wake Forest University School of Medicine said it reviewed the incident as soon as it was made aware of her tweet.

It said in an updated statement from earlier in April: ‘Our documentation verifies that after the student physician was unsuccessful in obtaining the blood draw, the student appropriately deferred a second attempt to one of our certified professionals.

‘The student did not attempt to draw blood again.’ The spokesman said she had followed the guidelines correctly after an investigation.

Del Rosario added: ‘I am writing this as an apology for a very irresponsible tweet that I sent on Twitter that I highly regret.

‘For the event mentioned in the tweet, I was performing a blood draw on a patient and during our conversation they had shown dismay at my pronoun pin.

‘I calmly shared my thoughts about pronouns and did not escalate the situation further.

‘When I was doing the blood draw, I missed the first time due to my inexperience as a student, and per our policy, my supervisor performed the successful blood draw the second time.

‘During this encounter, I never intended to harm the patient. I am truly sorry for poorly representing our school and our health system.

‘I will reflect on responsible social media use as a professional and my duty to care for all my patients, regardless of any differences of belief.’ 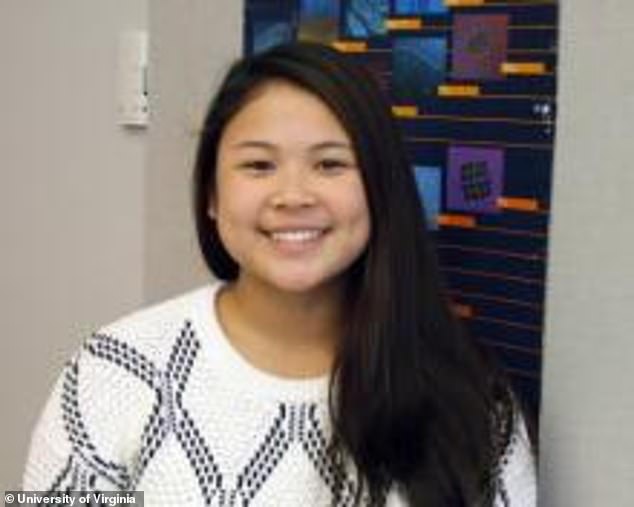 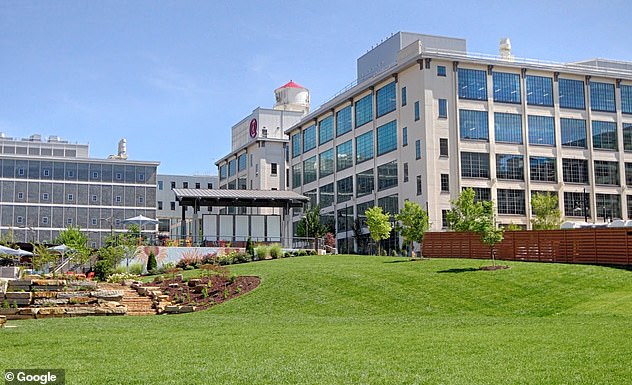 Wake Forest School of Medicine (pictured) did not respond to request for comment. DailyMail.com was also unable to reach Del Rosario 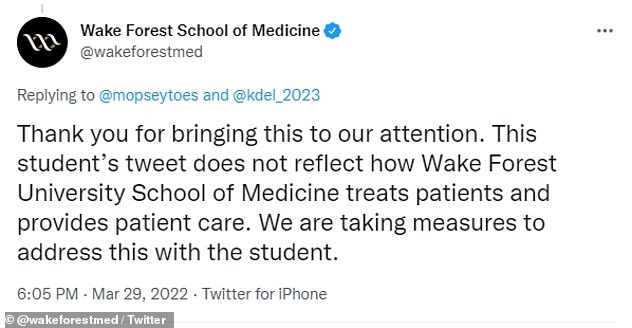 Del Rosario was slammed online last month after tweeting she had messed up the injection on purpose due to the patient mocking her.

She wrote: ‘I had a patient I was doing a blood draw on see my pronoun pin and loudly laugh to the staff ‘She/Her?

‘Well of course it is! What other pronouns even are there? It?’ I missed his vein so he had to get stuck twice.’

The medical student wiped all her social media pages when the university said it was looking into the post.

Despite the malpractice, students from Wake Forest University backed Del Rosario and hit out at the victim.

Ewen Liu, also a medical student, said: ‘[I] heard this story firsthand weeks ago and [it] seems like [people] are misinterpreting (understandably from the phrasing).

‘To clarify, the missed stick was COMPLETELY an accident and just seemed ‘karma-tic’.

‘She is kind and professional and would never harm anyone intentionally.’ She later deleted the post.

Ewen Liu, also a Wake medical student, said: ‘[I] heard this story firsthand weeks ago and [it] seems like [people] are misinterpreting (understandably from the phrasing)’

Meanwhile in an op-ed for student publication Old Gold and Black, Sophie Guymon – a psychology sophomore from San Francisco – claimed the response was ‘excessive’.

She wrote: ‘Twitter users were quick to condemn Rosario for purportedly violating the Hippocratic Oath to do no harm and ”assaulting” a patient over ”[differences] in political beliefs”, while failing to offer any substantive or nuanced criticism of the bigotry expressed by her patient.

‘The crux of the issue at hand is not the conduct of Del Rosario, but the bigotry expressed by her patient.’

She added: ‘Alleging that she attacked her patient simply because she disagreed with a remark they made and chose to tweet about it is an unwarranted logical fallacy.’

But Guymon was blasted in the comment section of her post, with former alumni who went on to become doctors saying it was ‘a disgrace’.

One woman, called Christina, posted: ‘She is a disgrace to the profession of medicine.

‘She certainly alluded to purposefully missing the draw so he would be stuck twice. Her apology is very staged and hollow.

‘She should be dismissed. We physicians will always encounter people who are not kind and we need to treat them equally.

‘The person making excuses for her obviously has an agenda and is displaying poor judgement as well. Truly disgusting.’ 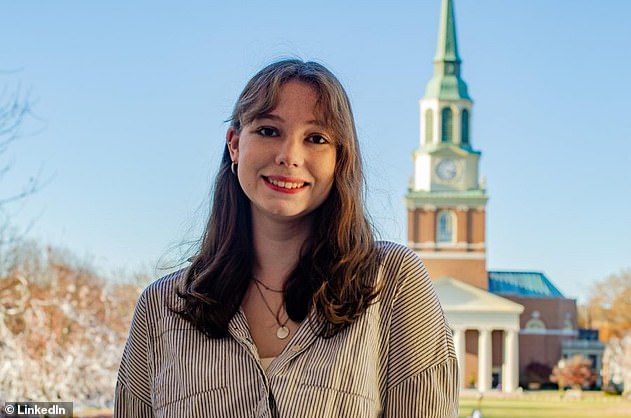 Meanwhile in an op-ed for student publication Old Gold and Black, Sophie Guymon (pictured) – a psychology sophomore from San Francisco – claimed the response was ‘excessive’

Del Rosario’s original tweet was made in response to a post from Ghanaian-American physician, cartoonist and author Shirlene Obuobi MD addressing transphobia.

Obuobj, who identifies as cisgender, said she has worn a she/her pronoun badge for a year to help patients and colleagues.

In a thread addressing transphobia, Obuobj wrote those ‘who fall under the trans umbrella feel a little more comfy.’

She added: ‘In the last few weeks, several cis patients have berated me for it.’ Del Rosario appears to have been an active advocate for the trans community.

Last year, she wrote an essay arguing against the ‘Bathroom Bill’ that sought to get people to use public restrooms corresponding to their gender assigned at birth.

The medical student argued ‘policies like these have consequential impacts on the health of transgender people’.

She also shared how she was a leader for Safe Zone in Medicine, which she said was ‘an organization run by health care trainees whose goal is to educate health professionals about the needs and disparities in LGBTQ+ healthcare.’

She went on: ‘This role prepares me to become a trustworthy doctor and advocate for the transgender community—a population which the medical field has harmed greatly in the past.’

‘It also allows me to train other health care professionals who aim to improve their practice to be more welcoming and gender-affirming.’

She argued she was ‘outraged and disheartened’ by the ‘countless horrors’ trans patients experience in the health care system, alleging many will not seek medical care ‘due to fear of discrimination and mistreatment’.

Del Rosario appears to have deleted all her social media accounts apart from her LinkedIn profile since her post sparked outrage across the country.

It says she graduated in 2017 from the University of Virginia with a bachelor’s degree in cognitive science with concentrations in neuroscience and biology.

She was ‘aspiring to become a medical doctor.’

Her biography also indicated she worked as a Scribe for ScribeAmerica in several general pediatrics clinics through Children’s Hospital of the King’s Daughters in Norfolk, Virginia, as well as at two dental facilities.

Tennis great Roger Federer hangs from the ceiling in nothing but his underwear and...