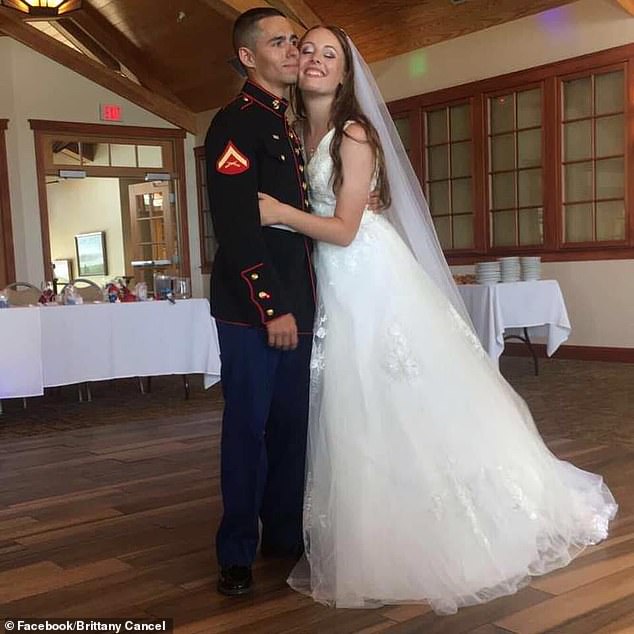 The wife of a former U.S. Marine who was killed while fighting alongside Ukrainian forces against Russia has seen her life ‘completely fall apart’ since she received the news of her husband’s death.

On Monday, Willy Joseph Cancel of Orange County New York, 22, was killed in Ukraine after he was deployed there by a private military contracting company.

In a GoFundMe post, his father, Willy Cancel, wrote that his 22-year-old widow, Brittany Cancel’s – who is also a Marine veteran – she received ‘the worst call of her life’ the next day, when she was informed that her husband was killed on the battlefield.

‘Your husband fought bravely but unfortunately he did not make it,’ she was told, Willy Cancel wrote.

‘As a family, we are trying to support them as much as possible and be there for each other, but Brittany and Anthony will need more than what we can provide.’

As of Saturday evening, the fundraiser has garnered over $63,000 toward supporting Cancel’s wife and his seven-month-old son.

‘He will grow up without a father, a father who was brave and selfless and whose life was senselessly lost,’ Cancel’s father wrote about his grandson, Anthony.

‘While he will grow knowing that his father died a hero, we know this will not be easy. No parent should ever have to bury their child, and no child should have to grow up without a parent.’

Willy Joseph Cancel, 22 (left), was killed fighting Ukrainian forces with a private security firm on Monday. His father, Willy, wrote on GoFundMe that his wife Brittany’s  (right) life has ‘completely fallen apart’ after her husband’s death 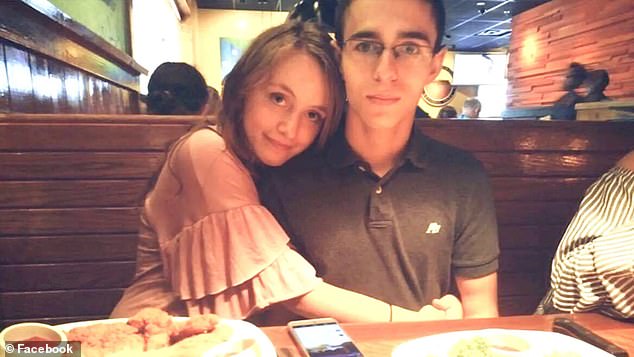 Cancel’s father wrote that Brittany, left, received the ‘worst call of her life’ on Tuesday, when she was told that her husband ‘found bravely, but unfortunately he didn’t make it 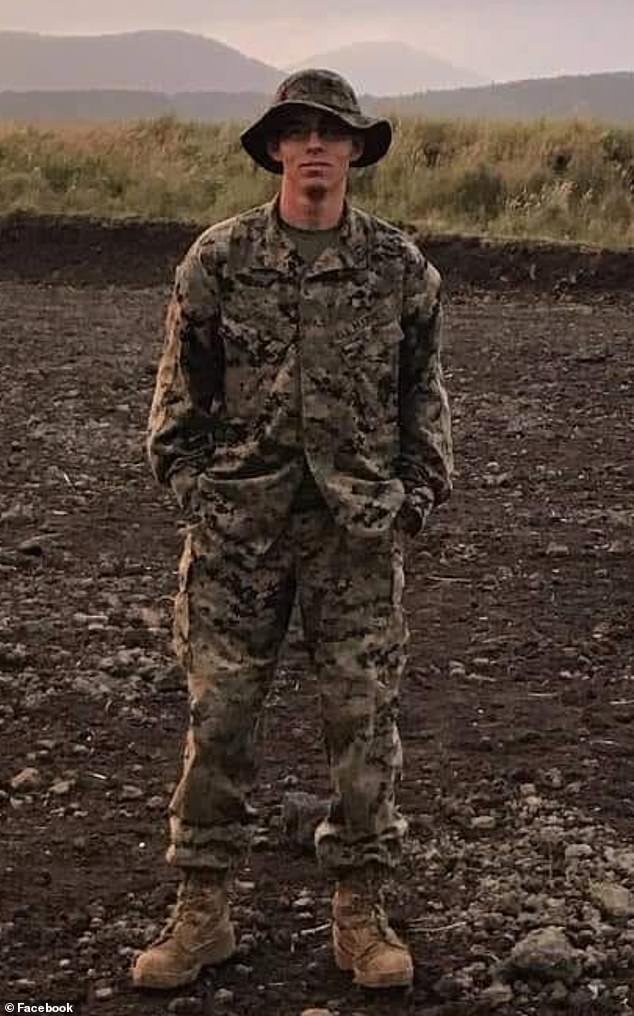 The circumstances surrounding Cancel’s death are unclear, and his body has not been recovered, according to this parents

Cancel’s mother, Rebecca Cabrera, said her son was working for a private military contracting company when he agreed to take up a job to fight in the Ukraine following Russia‘s invasion in February.

‘He wanted to go over because he believed in what Ukraine was fighting for, and he wanted to be a part of it to contain it there so it didn’t come here, and that maybe our American soldiers wouldn’t have to be involved in it,’ Cabrera told CNN.

The circumstances of Cancel’s death remain unclear, including how and where he was killed.

His mother added that those fighting alongside Cancel were not able to retrieve his body during the conflict that killed him.

‘They haven’t found his body,’ she said. ‘They are trying, the men that were with him, but it was either grab his body or get killed, but we would love for him to come back to us.’ 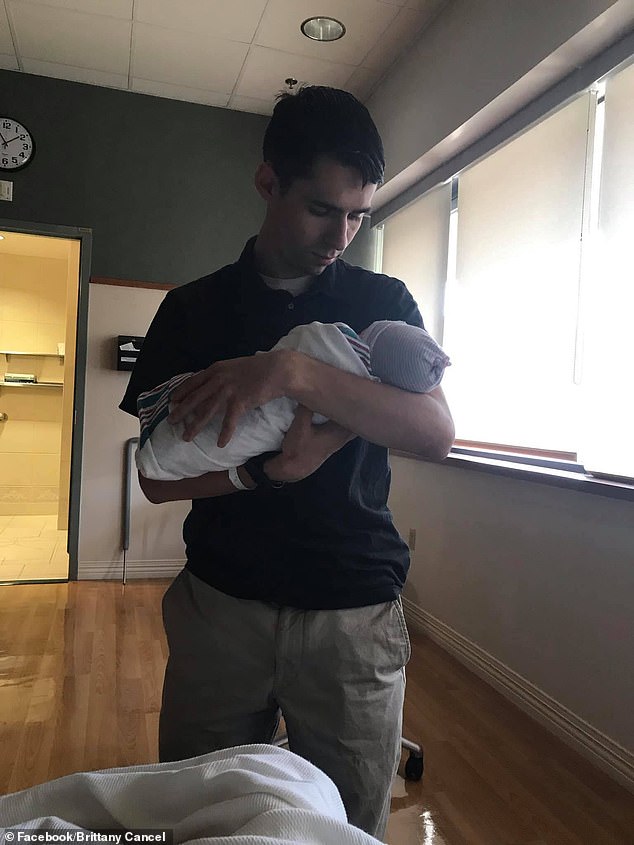 Cancel was the father of a seven-month-old son. The young dad is pictured cradling his son

The family said Cancel was living in Tennessee working as a corrections officer when he flew to Poland on March 12 and crossed into Ukraine.

Cabrera told CNN that her son was joined by men from ‘all different countries’ to assist the Ukrainian troops.

‘It was something that he believed in his heart, that was the right thing,’ Cabrera said. ‘He was the type of man who always stepped up when everybody else stepped back, and there were a lot of men who were like that that were with him.’

Cancel’s brother-in-law, Devin Tietze, echoed Cabrera’s remarks, saying that Cancel was the ‘type to fight for what’s right regardless of the outcome.’

‘He believed wholeheartedly this shouldn’t have happened and he wanted to go help the people in Ukraine,’ Tietze told CNN. 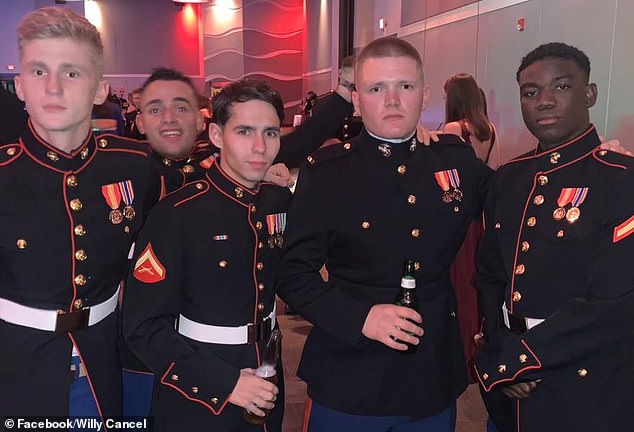 Cancel (second from the left, front row) moved on from the Marines to work as a correctional officer in Tennessee. While there, he also worked for a private security firm that provided him the opportunity to travel to the Ukraine to fight in March 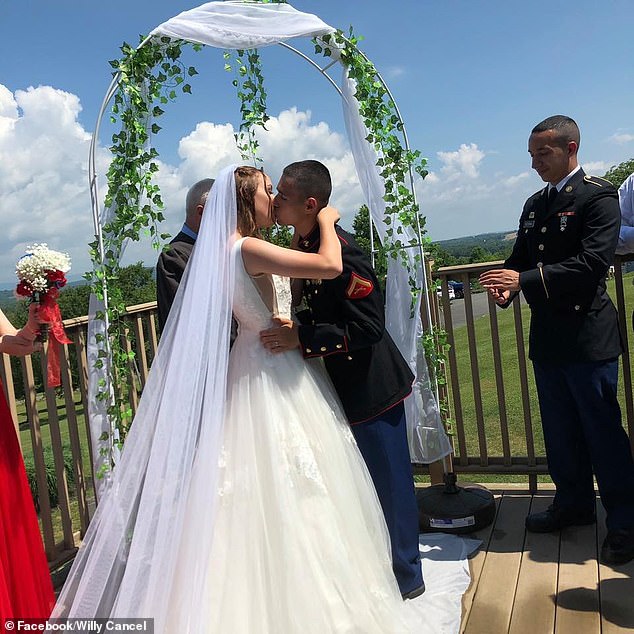 Cancel’s family said they are heartbroken by his death, and his body has yet to be found 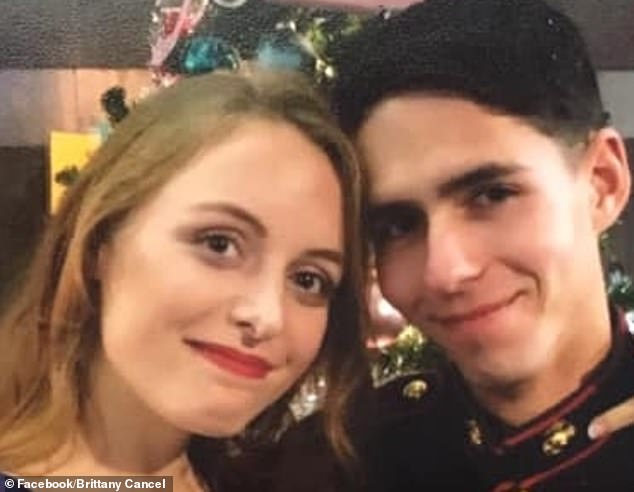 His family described him as a hero who wanted to help the Ukrainian people and stop the war before US troops could be called in. Cancel pictured with Brittany

Previously, Cancel  was stations at Camp Lejeune in North Carolina and served as a rifleman in the Marines. He was never deployed to a war zone, and was discharged for bad conduct after violating a lawful general order, according to Marine Corps spokesman Major Jim Stenger.’

The U.S. State Department said they were aware of the reports of Cancel’s death but could not comment based on privacy matters.

The Department reiterated in a statement that: ‘US citizens should not travel to Ukraine due to the active armed conflict and the singling out of US citizens in Ukraine by Russian government security officials, and that US citizens in Ukraine should depart immediately if it is safe to do so, using any commercial or other privately available ground transportation options.’

It is not known how many U.S. citizens are actively assisting Ukrainian troops in the war, but the Ukrainian Defense Ministry estimates that more than 20,000 volunteer veterans from 52 countries have joined the fight.

The influx of foreign fighters has led the Ukranian government to create the special International Legion, composed of the visiting veterans allied with the country. 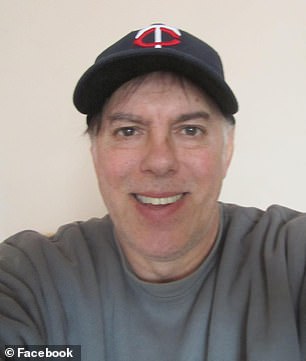 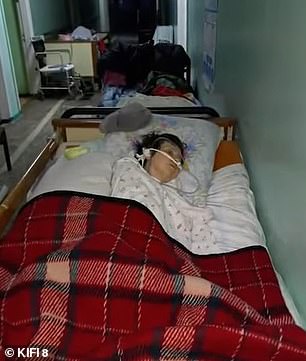 Hill had been in Ukraine caring for his partner Irina who has multiple sclerosis. He shared this photo of her, right, previously with an Idaho TV station about their fight to get out of the conflict zone 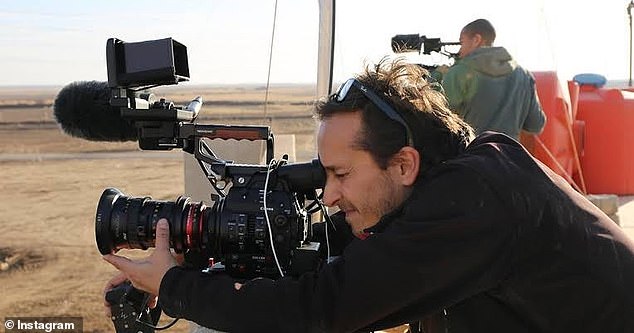 Brent Renaud, 50, was in a car with other journalists when Putin’s troops opened fire on him. He has worked in numerous conflict zones around the world and had won awards for his documentaries

Cancel is not the first American to die in the Ukraine as a result of the bloody war.

Jimmy Hill, 67, of Idaho, was gunned down in the streets of Ukraine while buying bread when he refused to leave the warzone because he was looking after his sick partner.

Hill was a lecturer in Kyiv but was in Chernihiv to care for his partner Ira, who has multiple sclerosis. They had returned to the country in December so Ira, who is Ukrainian, could be treated for MS, and became trapped at a regional hospital there.

Hill was among a group of 10 who were lining up to buy bread at a grocery store when Russian troops opened fire in a sickening act of war.

Renaud was in a car with other journalists in Irpin when Putin’s troops opened fire. He was fatally-shot in the neck, with one of his colleagues also injured.

Although Renaud was carrying a New York Times press badge at the time of his death, he was in fact working as a freelancer on a global film about refugees commissioned by Time magazine’s studio division.

Renaud’s death was announced by Andrey Nebitov, the head of Kyiv’s police department, who said he paid ‘with his life for trying to highlight the aggressor’s ingenuity, cruelty and ruthlessness.’

Savvy mother claims she can dry her bed sheets in ONE hour – and...