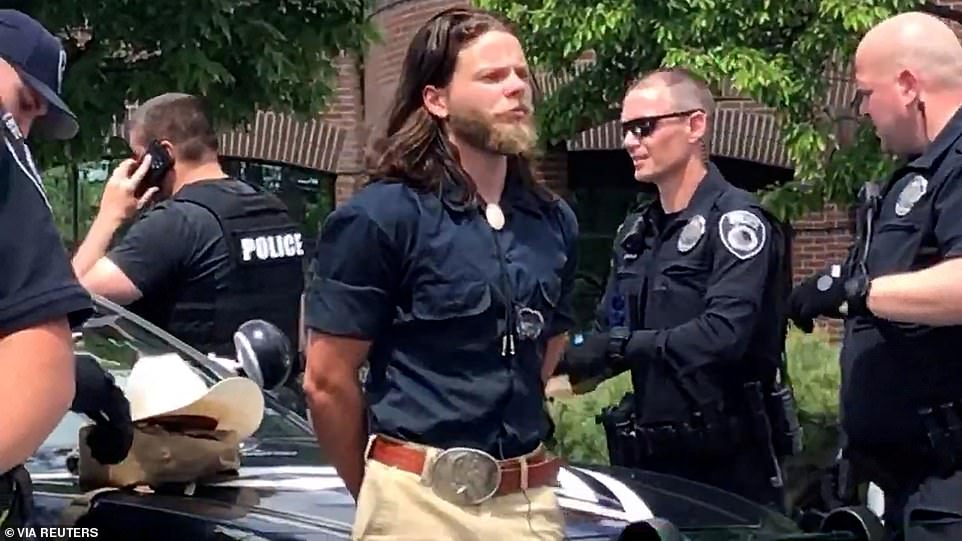 A 23-year-old self-declared leader of the alt-right was among 31 arrested for a planned riot on an Idaho Pride event Saturday – a large-scale detention that saw the members of the pro-white Patriot Front charged with criminal conspiracy.

Currently being held without bail, Thomas Ryan Rousseau – who, along with his followers, are faced with felonies for the alleged offense that could see them jailed for up to five years – founded the white supremacist group in 2017 at just 18, after starting pro-white Vanguard America when he was 16.

Rousseau, who grew up in a staunchly Republican suburb In North Texas, reportedly honed his rhetoric at his high school paper, writing opiniated columns before starting both organizations, which assert that its white members’ ancestors conquered America, and thus the country should be left to them.

Rousseau and dozens of other masked members of the group, which preaches its white nationalist ideology with propaganda shared on social media, were arrested in Coeur d’Alene, in northwest Idaho.

Police said the group, masked and decked out in military gear when apprehended, were plotting to incite chaos at a gay pride event in Coeur d’Alene City Park, and had been packed in a rented UHaul truck when they were pulled over by officers.

Cops said they were tipped off about the group’s planned strike from a ‘concerned citizen’ who saw the dozens of men load up into the truck ‘like a little army’.

Those arrested – including founder Rousseau – were all confirmed to be a part of the group, which was started by the then teen in 2017 shortly after the ‘Unite the Right’ rallies in Charlottesville, Virginia, that summer, which he attended with members of his former group, Vanguard America.

Thomas Ryan Rousseau, a 23-year-old self-declared leader of the alt-right, was among those cuffed for a planned riot on an Idaho Pride event Saturday – a large-scale detention that saw 31 of his Patriot Front charged with criminal conspiracy

An offshoot from that pro-white group, the Patriot Front has since maintained a similar white nationalist ideology, staging riots almost identical to the one police said they prevented Saturday.

In December, more than 100 masked members of the group marched on Washington DC in an an effort to ‘reclaim America’ -after which they were caught on camera loading themselves into the back of an U-Haul moving truck. 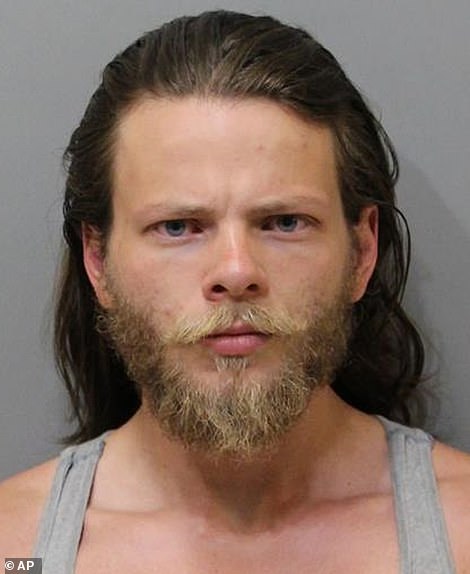 Thomas Ryan Rousseau, 23, of Grapevine, Texas, was among those facing felony charges of criminal conspiracy after dozens of members of the white nationalist group, known as the Patriot Front, were arrested in northwest Idaho Saturday

The procession, while peaceful, saw the white supremacists – uniformed in white gaiters, sunglasses, blue jackets, khaki pants, brown boots and hats – clutch American flags and plastic shields while marching down the steps of the Lincoln Memorial to a beating drum.

During that event, the Fort Worth Police Department (FWPD) cited Rousseau for placing signs, banners, stickers and other materials on public property without permission.

With that said, the rally, which prompted law enforcement to remain on standby, remained tame – with none of the protestors arrested.

That was not the case this time around.

All 31 men – who wore shirts inscribed with the message Reclaim America and hats that read ‘Victory of Death’ – were arrested on conspiracy charges Saturday, with nearly all being held on $300 bond.

Rosseau, however, is currently being held without bail, police records show – a move that may stem from the Texan’s prominence among the alt-right.

Rosseau grew up in the staunchly Republican suburb of Coppell, just outside of Dallas, to emerge as the leading figures of the pro-white right.

While enrolled in Coppell High School, Rosseau wrote a variety of opinion pieces for The Sidekick, the school’s newspaper, where he honed the propaganda production skills that would see him propelled into his current leadership role with white nationalists, first with first with Vanguard America and later with the Patriot Front.

Articles penned by the current white supremacist showed support for a plethora of conservative topics including the controversial ‘campus carry’ law in the lone state state, and North Carolina’s since nixed ‘bathroom bill’ that banned transgender citizens from using bathrooms that aligned with the gender they were transitioning to.

The pieces also saw the young conservative show his support of Donald Trump during the 2016 election, writing in in one article in October of that year, ‘Trump’s campaign is about more than just the election of who is president.’

‘It is a referendum on American democracy. A simple decision between who is really in control of this nation, a corrupt establishment with wishes to usurp democracy, or the American people.’

Rousseau and dozens of other masked members of the group, which preaches its white nationalist ideology with propaganda shared on social media, were arrested in Coeur d’Alene, in northwest Idaho 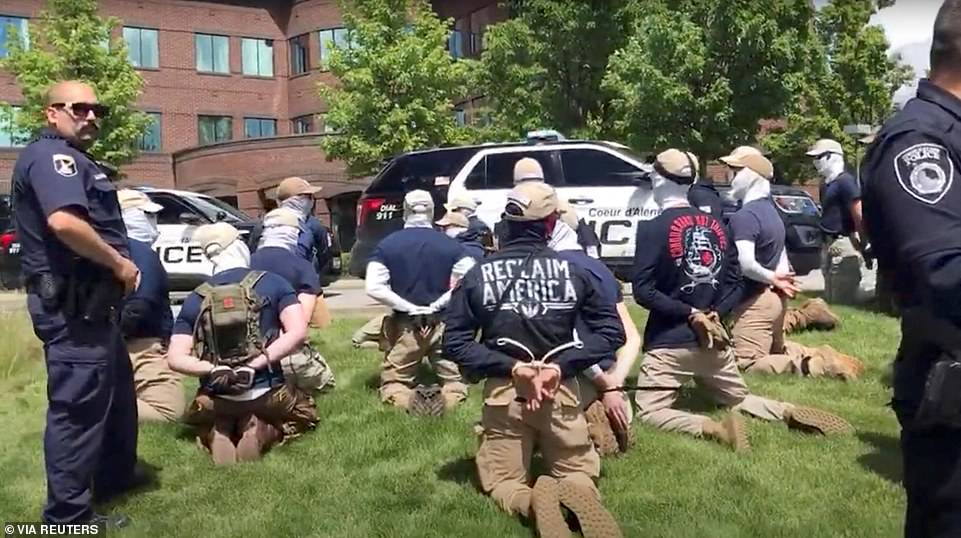 The group was rumbled when a local resident called cops after spotting the men, all wearing white masks and carrying shields, loading themselves into the vehicle ‘like a little army’ 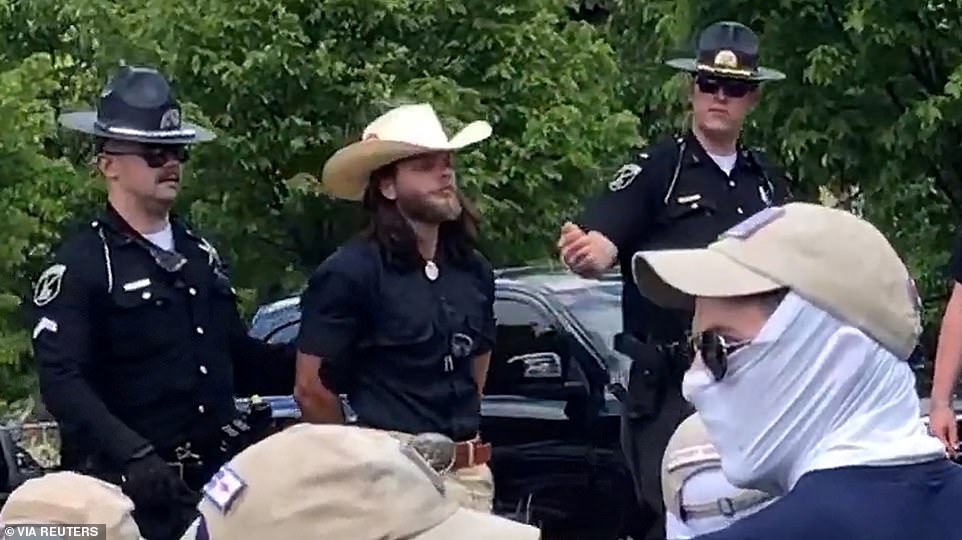 Rosseau, unlike others arrested, is currently being held without bail, police records show – a move that may stem from the Texan’s prominence among the alt-right

In a separate, since removed, column published days after the election, titled, ‘Trump: The silent majority no longer silent,’ Rousseau engaged in more rhetoric that would eventually reappear in future Patriot Front propaganda.

‘The truth is white voters, especially the working class, have had more than enough of being called racist, sexist, xenophobic, Islamophobic, homophobic and the rest of the usual trite buzzwords,’ Rousseau, then 17 and already heading Vanguard America, wrote.

‘The forgotten majority of the American electorate has shown that much to the dismay of the globalist agenda, that they have not yet been replaced by the tens of millions of blue-voting immigrants from abroad. That they can still hold up some semblance of a resistance against the decay of their nation.’

Rousseau would start the Patriot Front soon after, founding the org in 2017.

The group, responsible for more than 80 percent of white supremacist propaganda in 2020, was formed by Rousseau in the aftermath of the ‘Unite the Right’ rally in Charlottesville, Virginia, breaking off from Vanguard America.

What is the Patriot Front?

The group maintains a white nationalist ideology, firm in its belief that since its white members’ ancestors conquered America, the country should be left to them, and no one else.

The group, which sees black Americans, Jews and LGBTQ people as enemies, argues, argues that through processions and riots against these groups, it is preserving the ethnic and cultural origins of its members’ white, European ancestors.

The Patriot Front spreads its message predominantly  through the internet, via social media with materials such as banners, fliers, and posters.

In 2020, the group shifted its materials’ message from being more antisemitic and white supremacist to a form of ‘patriotism’ that justifies its bigotry, based in white supremacist, xenophobic, anti-Semitic, and fascist ideals.

The group is responsible for the majority of white supremacist propaganda in the US, representing 80 percent of all propaganda incidents nationally in 2020.

They currently participate in localized ‘flash demonstrations’ across the country.

Both groups preach a white nationalist ideology, based in a belief that since its white members’ ancestors conquered America, the country should be left to them, and no one else.

Rousseau led members of Vanguard America the 2017 rally – which made headlines after a man deliberately drove his car into a crowd of people peacefully protesting the right-winged demonstration, killing one – and can be seen in several photos of the incident with other members of his then group.

Other photos show the white supremacist with James Alex Fields, Jr., the man facing first-degree murder charges for the attack, which police contend was politically motivated.

No attorney was immediately listed for Rousseau, who is currently being held without bond, police records showed Monday.

Also among the arrestees was Mitchell F. Wagner, 24, of Florissant, Missouri, who was previously charged with defacing a mural of famous black Americans on a college campus in St. Louis last year.

Michael Kielty, Wagner’s attorney, said Sunday that he had not been provided information about the charges.

LGBTQ advocates said Sunday that polarization and a fraught political climate are putting their community increasingly at risk.

Those arrested came from at least 11 states, including Washington, Oregon, Texas, Utah, Colorado, South Dakota, Illinois, Wyoming, Virginia, and Arkansas, White said. Only one was from Idaho.

Their playbook, according to Lewis, involves identifying local grievances to exploit, organizing on platforms like the messaging app Telegram and ultimately showing up to events marching in neat columns, in blue- or white-collared-shirt uniforms, in a display of strength.

Though Pride celebrations have long been picketed by counter-protesters citing religious objections, they haven’t historically been a major focus for armed extremist groups.

Still, it isn’t surprising, given how anti-LGBTQ rhetoric has increasingly become a potent rallying cry in the far-right online ecosystem, Lewis said.

‘That set of grievances fits into their broader narratives and shows their ability to mobilize the same folks against “the enemy” over and over and over again.’ 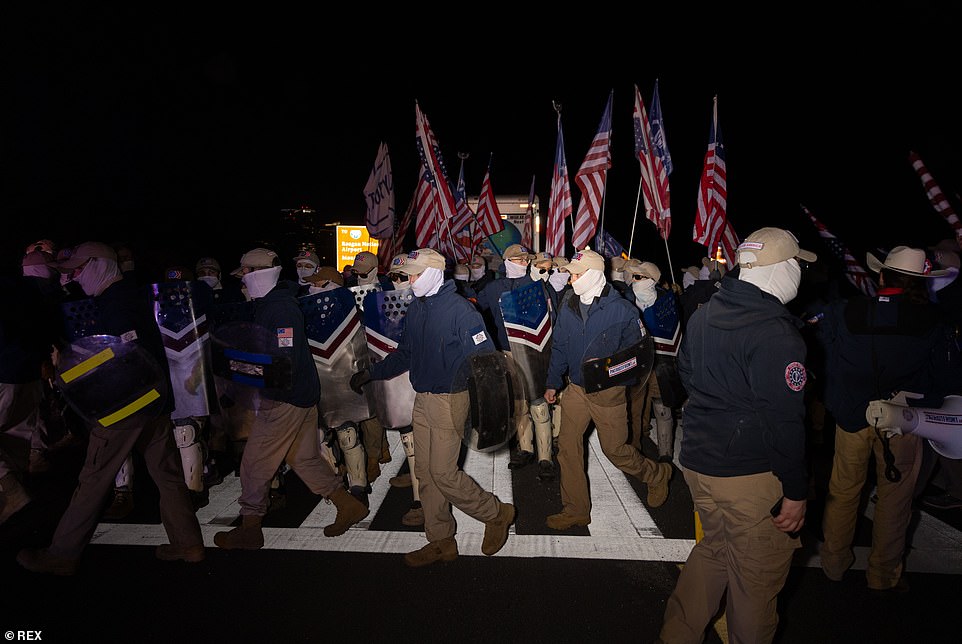 An offshoot from Rosseau’s previous pro-white group Vanguard America, the Patriot Front has staged riots almost identical to the one police said they prevented Saturday. Pictured: Members of Patriot Front hold shields after marching in Washington, DC on December 4, 2021 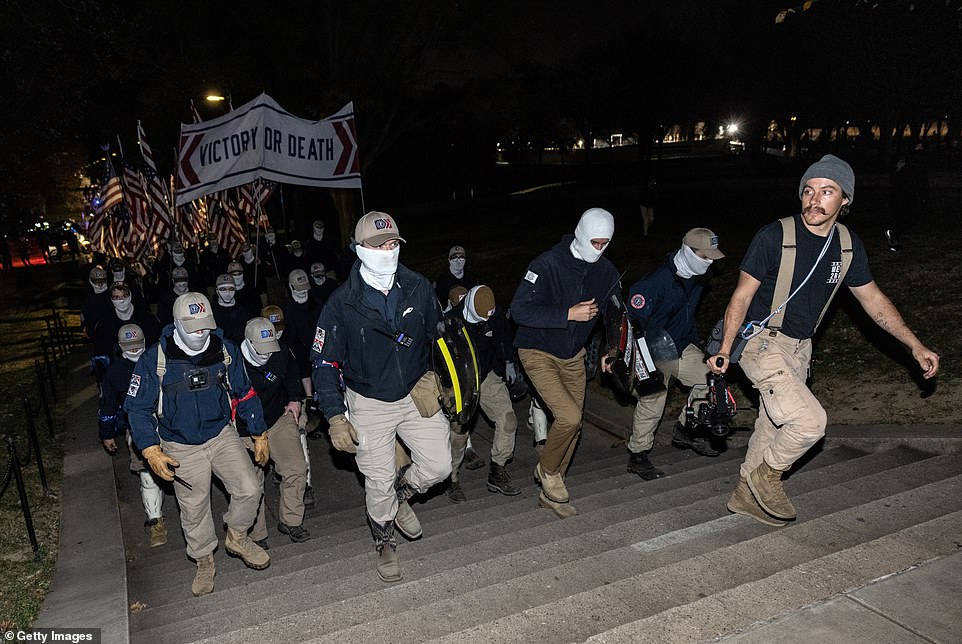 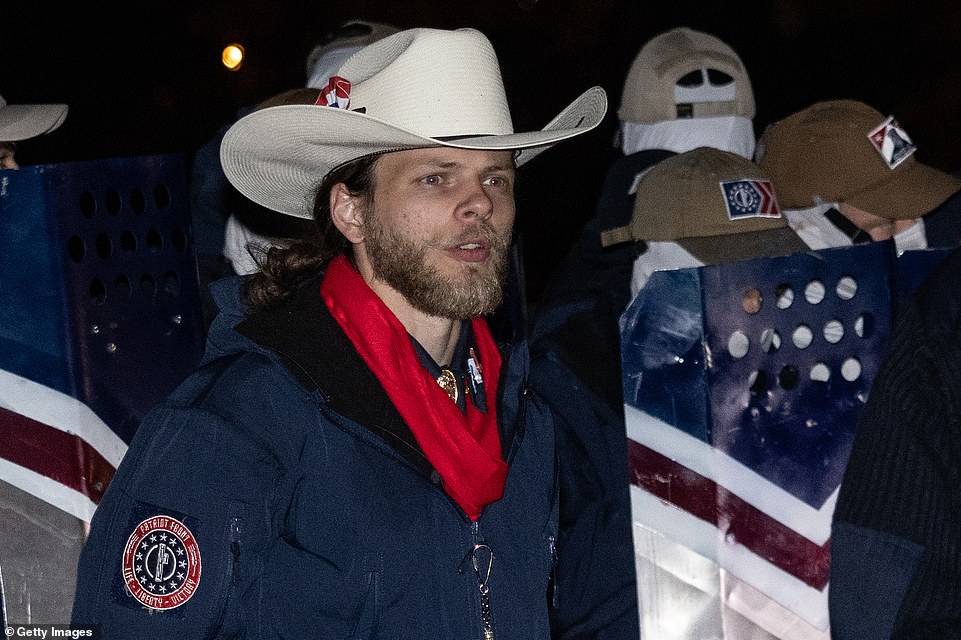 Rousseau also attended that protest, which occurred on December 4, 2021. No one was arrested after that procession, which remained peaceful 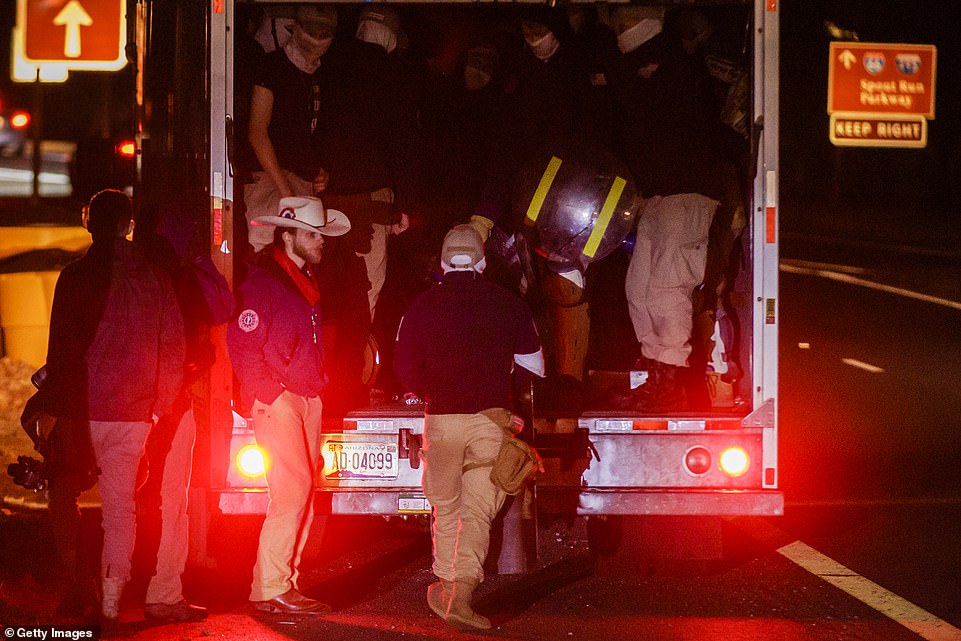 Christie Brinkley, 68, looks youthful as she talks climate change and how voting helps

As Beatles legend Paul McCartney turns 80, CRAIG BROWN gives a insight into what...

Pete Davidson strolls around Cairns with his zipper undone