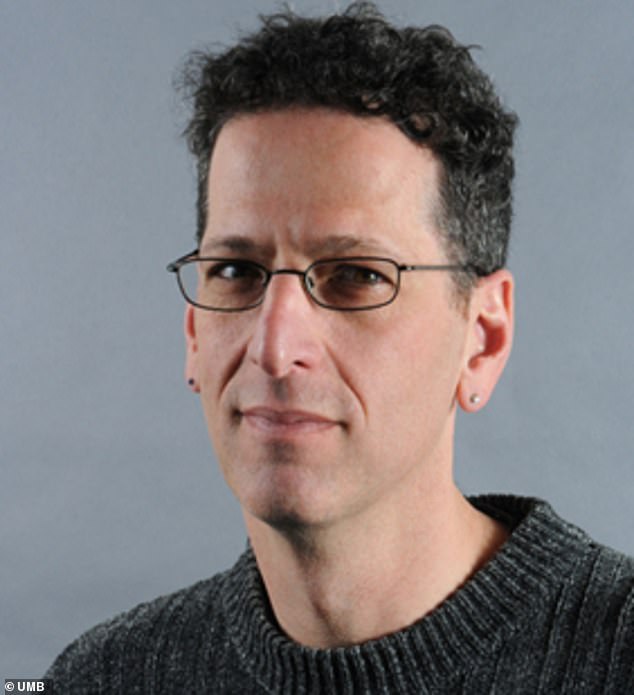 A white UMass Boston professor, Jeffrey Melnick, was accused of racism by the school chancellor, Marcelo Suárez-Orozco, who is Latino, in a school-wide email after he publicly questioned the qualifications of a black dean, Tyson King-Meadows, to chair a staffing committee.

During a February 7 faculty council meeting, Melnick, a professor of American studies and the elected Communications Director of the Faculty Staff Union, questioned Provost Joseph B. Berger’s decision to appoint King-Meadows – the newly hired dean of liberal arts – to lead the search for a new education dean.

During the faculty council meeting, which King-Meadows was attending, Melnick said King-Meadows’ appointment to lead the new staff search was ‘a matter of some controversy,’ because the faculty had not yet ‘worked out the feelings’ about the search that lead to King-Meadows’ own hiring.

Following this email, a letter signed by 10 faculty members – including four interim deans – was distributed to staff calling for an apology from Melnick and the entire faculty council (FC) on which he serves.

‘Listening to an FC executive committee member impugn the new Dean’s integrity and capacity to perform his job must have felt dehumanizing for him,’ the letter reads, referring to Melnick’s questioning of King-Meadows while he was present.

‘It seems patronizing and smacks of white privilege and a posture of supremacy.

‘It is time for this FC member, the FC executive committee and the entire Faculty Council to apologize to the CLA Dean for the remarks made on behalf of UMB faculty especially if the remarks harbored no ill intent.’

The accusation led to an ongoing campus and community-wide spat between faculty, administration and the Boston Globe newspaper about racism and school politics at the University of Massachusetts Boston.

Professor of American studies, Jeffrey Melnick, insists his comments were not racially motivated and that the administration is retaliating for his past criticisms of them 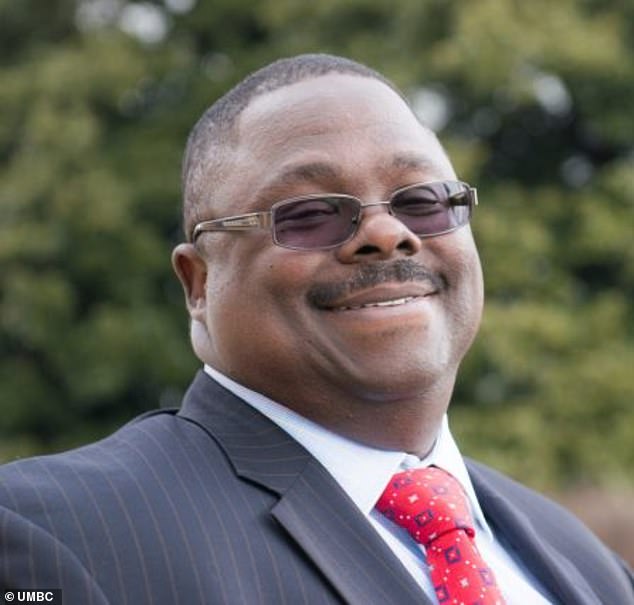 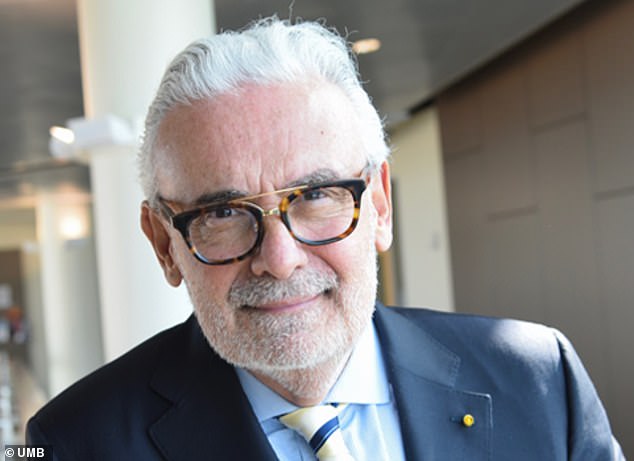 ‘There is widespread sentiment on campus (as our union president said) that this is retaliatory action for my very visible criticism of admin and represents an attack on faculty and union power more generally,’ Melnick told DailyMail.com.

‘The administration is weaponizing anti-racism to silence faculty on other issues that really don’t have to do centrally with race,’ UMass Boston labor historian and faculty union leader Steve Striffler, who is white, told Boston radio station GBH in March.

King-Meadows joined the UMass Boston administration just five months prior in September 2021, after the administration appointed him in favor of the faculty council’s other finalists, current professors Rajini Srikanth and Arindam Bandopadhyaya.

‘I had heard from a few people that they kind of wondered why this brand new dean — who wasn’t from the ed school and just got to UMass – why he had been named to lead the search,’ Melnick told GBH.

King-Meadows’ ‘role and responsibilities as the chair of a search committee are being scrutinized and challenged in ways that no other dean has experienced at UMass Boston,’ the email from the provost and chancellor read.

‘There’s no room for this behavior on our highly diverse campus, especially one that aspires to be the leading antiracist, health-promoting public research university.’

‘We stand in solidarity with Dean King-Meadows and all our African American and Black colleagues at the university. And let us be perfectly clear: We have full confidence in Dean King-Meadows to lead this search.’ 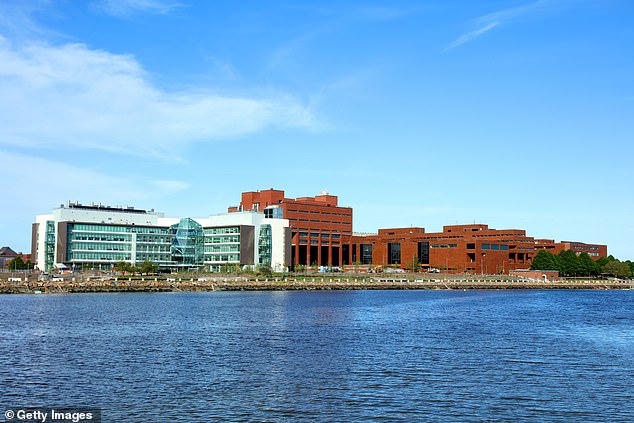 King-Meadows joined the UMass Boston (pictured) administration just five months prior in September 2021, after the administration appointed him in favor of the faculty council’s other finalists, current professors Rajini Srikanth and Arindam Bandopadhyaya

As of April, Suárez-Orozco and Berger are in talks with the UMass Boston faculty council to resolve the issue.

Melnick maintains that his remarks had no racial intention, and that the administration’s accusations are motivated by criticisms he has made in the past about the teeth of their own anti-racist policies on campus.

In a March interview with the UMass Boston student newspaper, The Mass Media, Melnick pointed to comments he has made about the administration in his weekly Faculty Staff Union newsletter, ‘The Point,’ and said that the administration has tried to silence him for them before.

‘When our provost first met with my union’s president after taking the job, the provost directly asked him to see if he could get me to tone down my criticisms of the administration,’ Melnick told The Mass Media. 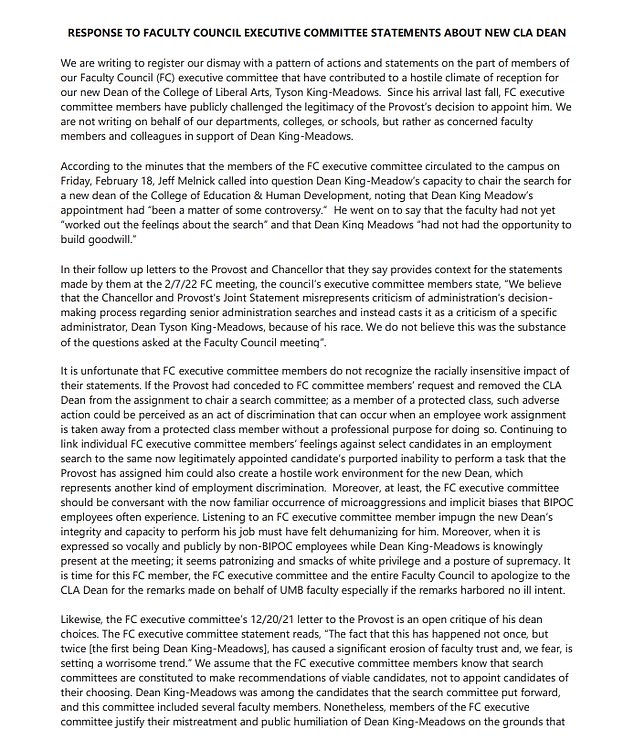 Following the chancellor’s accusations of racism against Melnick, 10 faculty members signed and circulated a letter demanding an apology from Melnick 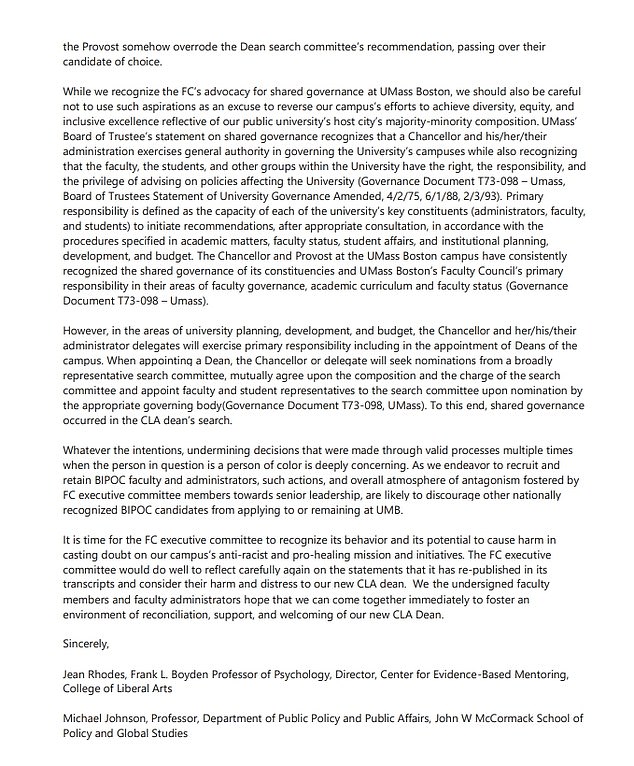 In a February letter to the chancellor and the provost, the UMass Boston graduate student union (known as GEO) denounced the accusations of racism and supported Melnick’s assertions that race was being used as a retaliatory tool of control. 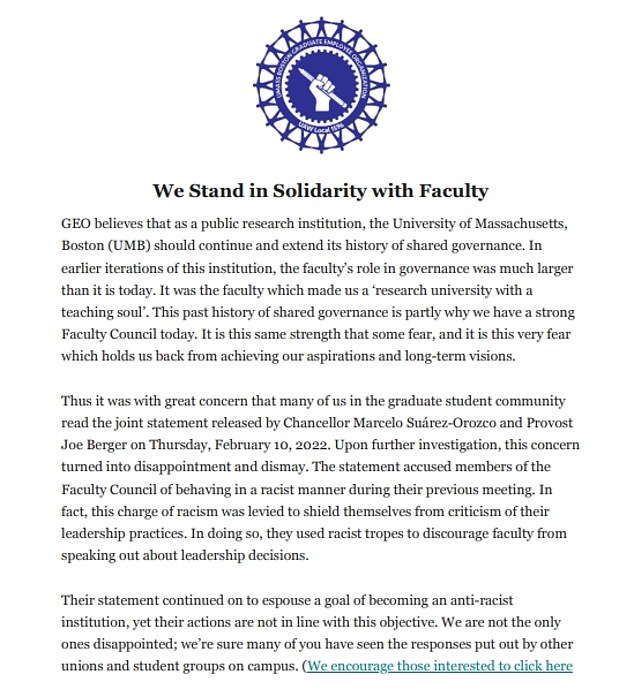 In February, the UMass Boston graduate student union (known as GEO) sent a letter to the chancellor and the provost in support of Melnick and the faculty 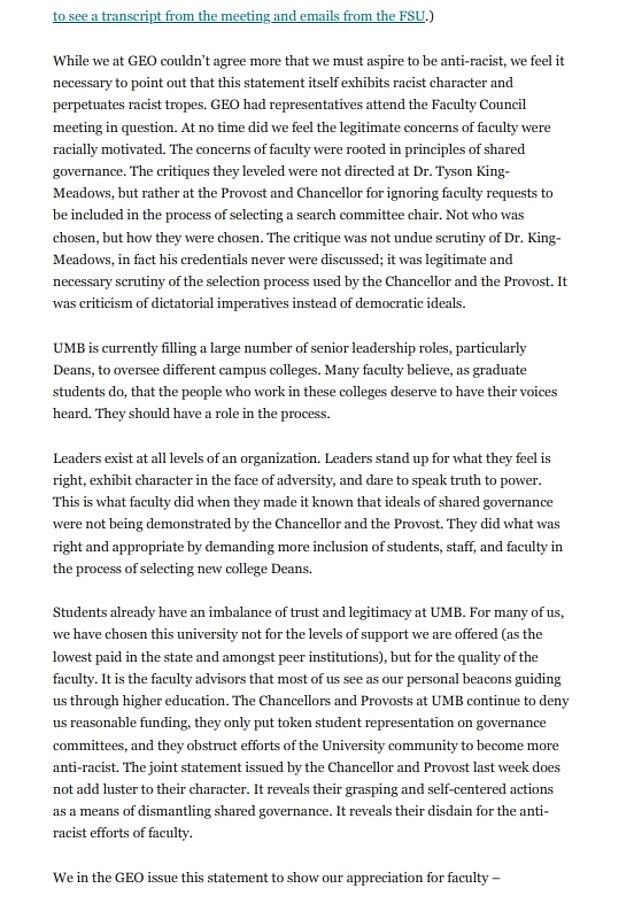 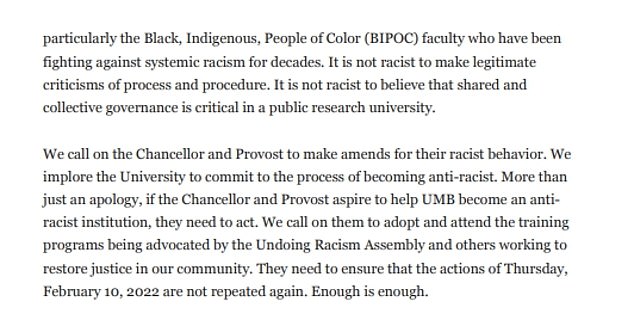 ‘As a white person committed to anti-racist work I welcome each and every opportunity to think about how systemic racism works and what part I might play in its reproduction,’ Melnick told The Mass Media.

‘So personally, I welcome this chance to keep on doing this work – even if the opportunity to do so was presented by two powerful administrators who put me on blast to the entire extended UMass Boston community without making any effort to first contact the Faculty Council leadership or me.’

UMass Boston administrators did not respond to DailyMail.com’s request for comment.