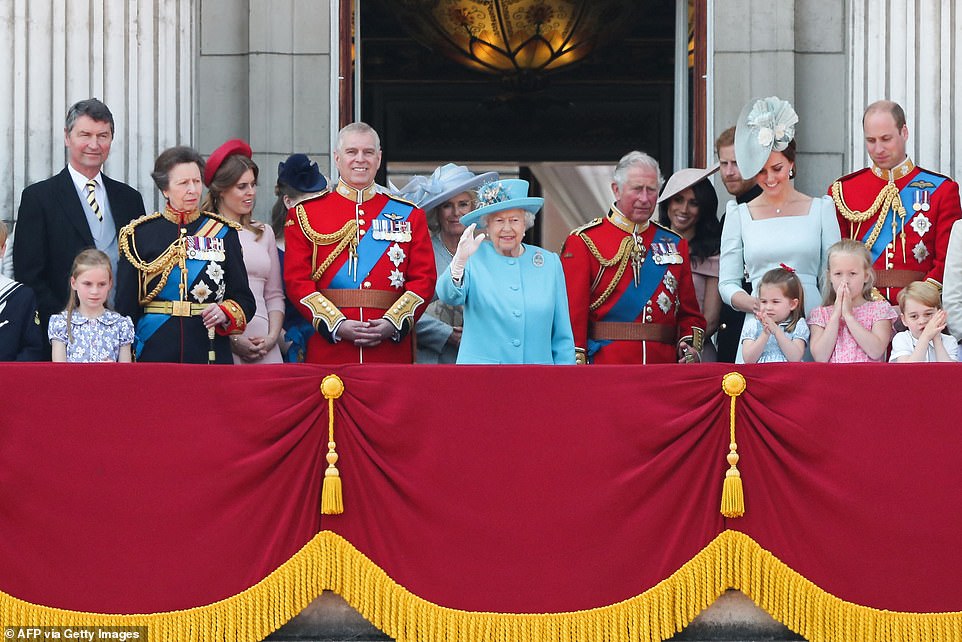 The Queen‘s decision to ban Prince Andrew from the Buckingham Palace balcony during her Platinum Jubilee celebrations proves ‘there is no way back’ for the disgraced duke, royal experts said today.

Andrew, 62, may still appear at other events over the Jubilee weekend, but his mother’s decision to exclude him from one of the most quintessential moments of any major royal event represents a powerful symbolic snub.

The balcony appearance during the RAF flypast is a traditional staple of Trooping the Colour in particular – which this year will serve as the spectacular start to a long weekend to mark the Queen’s 70 years on the throne.

‘Andrew must surely realise that there is absolutely no way back for him,’ Royal author Richard Fitzwilliams told MailOnline.

‘This clarifies matters, and it was essential to do so as his involvement in any event is so damaging for the reputation of the Royal Family.’

Biographer Tom Bower was equally emphatic, saying Andrew had been ‘ordered to disappear’.

Only senior royals will be allowed to appear on the balcony on the Queen’s official birthday, meaning Prince Andrew’s daughters Beatrice and Eugenie will not be invited.

However, the Queen is understood to be making a special effort to include the princesses in every other aspect of the celebrations, Daily Mail Royal editor Rebecca English reports.

Meghan and Harry will also be barred, it emerged today. Today, they promised to be in Britain with their children for the Jubilee next month – in a bombshell announcement made just minutes after the palace’s own statement.

Prince Andrew standing by the Queen’s side during Trooping the Colour on June 9, 2018. Royal expert Richard Fitzwilliams said his mother’s decision to ban him from appearing this year showed ‘there is no way back for him’

Today’s news is yet another public humiliation for Andrew.

A slew of authorities, institutions, schools and even golf clubs have all sought to distance themselves from the duke since he settled his civil case with Jeffrey Epstein sex trafficking victim Virginia Giuffre for £12million, despite denying any wrongdoing.

The Queen’s decision to publicly exclude him from a crucial family moment is likely to be particularly hurtful, not least due to his fondness for appearing at his mother’s side at public events and his determination, according to friends, to return to public life.

He prompted outrage in March when he insisted on accompanying the Queen from Windsor Castle to a Service of Thanksgiving for Prince Philip – pointedly walking her down the aisle at Westminster Abbey to her seat.

Andrew sparked yet more controversy days by issuing a now-deleted 700-word statement about the Falklands War that was signed off as ‘HRH’, despite Buckingham Palace saying he would no longer use the title.

Richard Fitzwilliams said it was important for the Queen to visibly demonstrate Andrew was no longer considered a visible part of royal life.

‘There has been endless speculation as to which members of the Royal Family will appear on Buckingham Palace’s iconic Balcony after Trooping the Colour this year,’ he said. 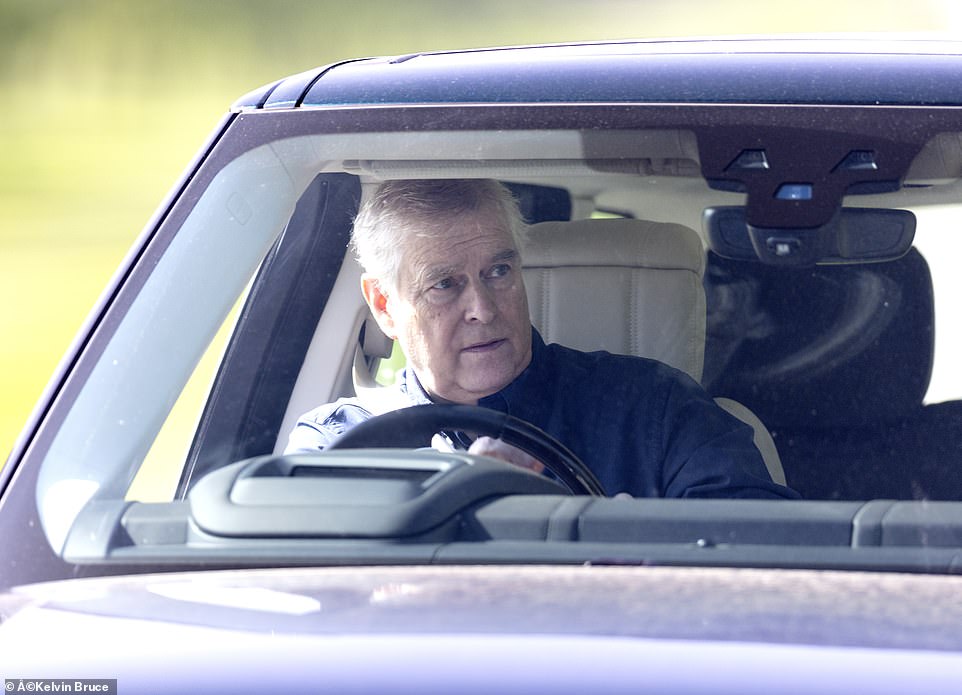 ‘Balcony appearances are a tradition that date back to Queen Victoria and one that commands worldwide attention.

‘The Queen has now clarified this, which will put an end to the endless rumours which have been swirling around regarding the possible appearance of the Sussexes and of Andrew.

‘He is in disgrace and should most emphatically not appear. It is extremely important that this has been clarified.’

Andrew stepped down from public duties in 2019 and just weeks ago paid millions out of court to settle a civil sexual assault case.

He was stripped of his honorary military titles and forced to no longer use his HRH style and – in the latest ignobility – was recently deprived of his Freedom of the City honour by councillors in York, who branded him ‘an utter disgrace’. 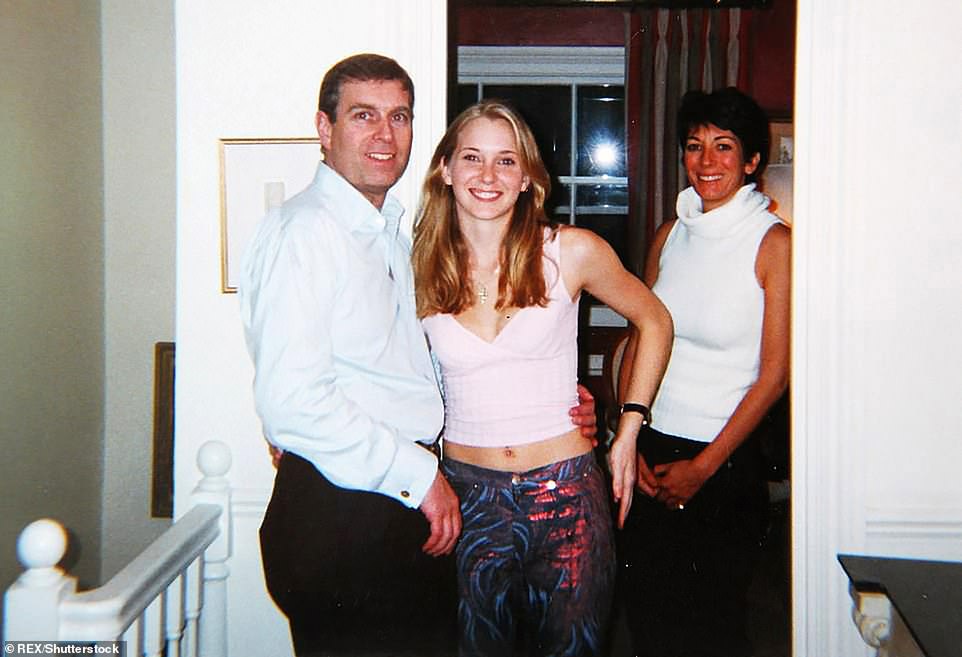 A slew of authorities, institutions, schools and even golf clubs have all sought to distance themselves from the duke since he settled his civil case with Jeffrey Epstein sex trafficking victim Virginia Giuffre (pictured) for £12million, despite denying any wrongdoing

It sparked fresh calls for Andrew to also lose his Duke of York title, but the Queen is understood to be reluctant to concede to these demands.

Today, the palace made it clear Andrew and other family members will still be invited to events over the Jubilee weekend.

‘We’ve always made that clear and they are likely to be public events,’ a source said.

But while this minor concession may spare Andrew at least some blushes, it will do little to persuade anyone that the duke’s campaign to rebuild his shattered reputation has even the most minor hope of succeeding.

The Royal Family on the Buckingham Palace balcony during Trooping the Colour in 2019. Eugenie and Beatrice, seen behind Andrew, will not be invited this year, nor will Harry and Meghan (far right)