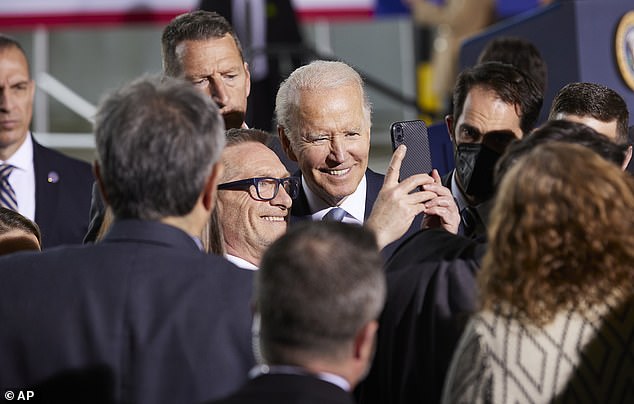 President Joe Biden suggested Democrats were having political trouble because Americans were unaware of the party’s accomplishments.

‘We’ve done one hell of a job,’ the president said Thursday afternoon at a high-dollar fundraiser at the Portland Yacht Club, co-hosted by The New Republic’s owner and editor Win McCormack and his political consultant wife, Carol Butler.

Biden said that ‘because things have moved so rapidly, so profoundly’ that ‘they don’t know a lot about what we’ve already done.’

He cited some statistics like the creation of 7.9 million jobs, including 430,000 manufacturing jobs, a shrinking unemployment rate and deficit reduction.

The president appeared at back-to-back fundraisers in Portland, Oregon and Seattle, Washington Thursday – marking Biden’s first time fundraising on the road as president of the United States.

In Seattle, Biden headlined an affair at the lakefront home of Mary Snapp and Spencer Frazer hosted by Microsoft’s President and Vice Chair Brad Smith and his wife Kathy Surace-Smith.

At both fundraisers he was raising money for he Democratic Grassroots Victory Fund, the Democratic National Committee’s political action committee, in advance of the 2022 November midterm races.

But the president admitted there was economic anxiety due to higher-than-normal gas prices and inflation that could hurt Democrats on the ballot.

‘People are angry and don’t quite know what to do,’ Biden said.

President Joe Biden suggested Democrats were having political trouble because Americans were unaware of the party’s accomplishments at a Portland fundraiser Thursday. Earlier in the day he gave an infrastructure related speech at the Portland International Airport (pictured) 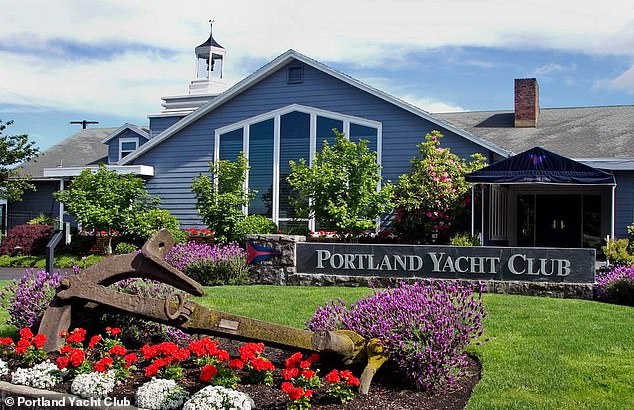 President Joe Biden’s Portland fundraiser was moved to the Portland Yacht Club (pictured). It was hosted by The New Republic’s owner and editor Win McCormack and his political consultant wife, Carol Butler 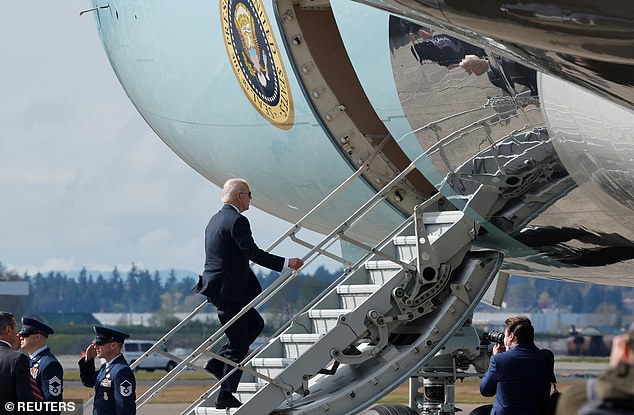 President Joe Biden boards Air Force One after appearing at a high-dollar Democratic fundraiser in Portland, Oregon. His secon fundraiser was at a private, lakefront home in Seattle, Washington

Both polls and historical precedent suggest that Democrats could be in for a beating this fall and lose control of their narrow majorities in the House and Senate.

But in Portland Biden pushed that winning was simply a matter of letting people know where the Democrats versus Republicans stand – and believed Democrats could pick up two Senate seats.

‘This is not your father’s Republican Party,’ he said. ‘This is the MAGA party.’

He tore into a plan pushed by Florida Republican Sen. Rick Scott – who’s in charge of the National Republican Senatorial Committee this cycle – that sunsets all federal laws after five years.

Democrats, including Biden at the fundraiser, have jumped on that to suggest it means the end of Social Security and Medicare.

‘If you want a copy of it, I’ll send it to you,’ the president told attendees of Scott’s 11-point agenda. ‘That’s what they’re running on.’

In both locales, he also called out Florida Republicans for seeking to dissolve Disney’s special status that allows the company to act as its own government.

‘There’s nothing conservative about throwing Disney out of its current posture… over saying gay?’ the president mused to the Seattle crowd.

In Portland, Biden recalled how Democrats successfully won back the House of Representatives in 2018, telling the crowd he went into 56 districts – and Democrats won 46.

‘We won all those seats back in 2018 because they kept for 500 times trying to do away with Obamacare,’ he said. ‘But what people didn’t know – and the point I’m about to get to, they don’t know a lot about what we’ve already done.’

‘We said do you know why, if you have a pre-existing condition, you can’t be denied insurance? Because of Obamacare. Nobody knew it. We won all of those races,’ he continued.

He then said he was ‘worried’ going into the midterms, that the American people didn’t know what he’d done.

The Portland fundraiser was originally supposed to take place at the home of McCormack and Butler, but the alt-weekly Willamette Week reported that it was moved due to popular demand.

He opened by telling the Democratic donors he was there to thank them and closed by promising to get out more ‘and mak[e] the case for what we’ve done.’

Earlier, he delivered an infrastructure-related speech at the Portland International Airport, touting the bipartisan bill he signed into law last year. 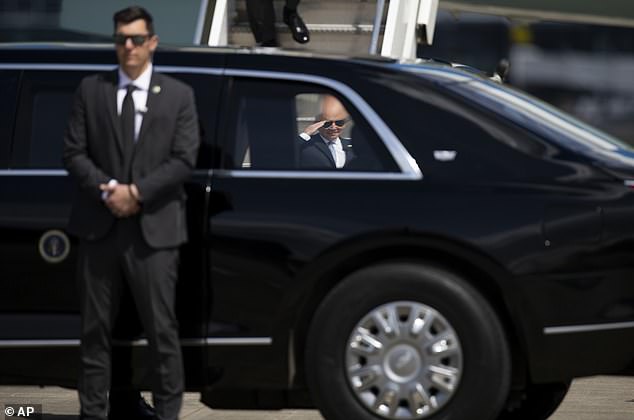 President Joe Biden arrives in Portland, Oregon to give an infrastructure speech and then attend a fundraiser at the Portland Yacht Club

On Wednesday night, the director of the White House Office of Public Engagement Cedric Richmond – speaking at an event hosted by the White House Correspondents’ Association and the Bipartisan Policy Center – suggested that at some point the president would make a ‘pivot’ and care more about the midterms.

‘I think that at some point you’ve got to make that pivot, but right now this is a president who cares more about other people than 1. his political future and 2. getting credit,’ Richmond told the crowd.

‘We all recognize that at some point we’ll take a deep breath from all those things were trying to do at once and tell the American people what we’ve been focused on doing and how we’ve achieved that,’ he continued. ‘And I think we’ve got some really great stories to tell.’

He also assured Democrats watching on C-SPAN: ‘The prediction of our demise, I think, is premature.’

Your stars for 2023: What does the New Year have in store for you?