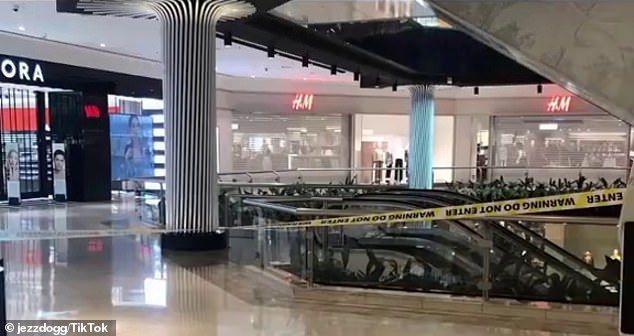 A woman has died after a fall inside one of Australia’s busiest shopping centres, horrifying distressed shoppers.

The incident happened inside Parramatta Westfield on Friday and is believed to have involved a woman falling from either a fourth or fifth level onto the ground below.

The incident was confirmed anonymously to Daily Mail Mail Australia by an emergency services worker.

The age of the victim is not known, with some reports saying she was middle aged, while others have suggested a teenager fell.

The woman is believe to have died on the scene, upsetting shoppers and workers who witnessed the fall.

Several shops are believed to have closed and counsellors were made available to workers.

Social media went into overdrive on Friday and Saturday speculating over the identity and circumstances around the fall.

Images shared online showed yellow tape sectioning off parts of the mall around one block of escalators.

Disturbingly it is not the first time someone has fallen to their death inside the same centre.

A woman died from a fall inside Parramatta Westfield in May 2019.

Westfield Parramatta is Australia’s fourth largest shopping centre and is the busiest Westfield in the country, with 498 stores.

Father confronts pro-choice protesters by quizzing them on ‘what is a woman’ in new...