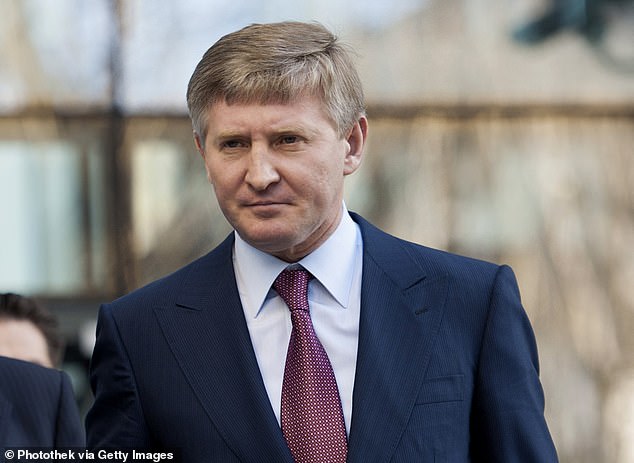 Ukraine’s richest man has pledged to help rebuild the besieged city of Mariupol, a place close to his heart where he owns two vast steelworks that have been at the centre of heavy fighting with Russian forces in recent weeks.

Rinat Akhmetov has seen his business empire shattered by eight years of fighting in Ukraine’s east but remains defiant, sure that what he calls ‘our brave soldiers’ will defend the Sea of Azov city reduced to a wasteland by seven weeks of shelling.

For now, though, his Metinvest company, Ukraine’s biggest steelmaker, has announced it cannot deliver its supply contracts and while his financial and industrial SCM Group is servicing its debt obligations, his private power producer DTEK ‘has optimised payment of its debts’ in an agreement with creditors.

Rinat Akhmetov (pictured) – Ukraine’s richest man – has pledged to help rebuild the besieged city of Mariupol, a place close to his heart where he owns two vast steelworks that he says will once again compete globally

‘Mariupol is a global tragedy and a global example of heroism,’ Akhmetov said in written answers to questions from Reuters new agency. ‘For me, Mariupol has been and will always be a Ukrainian city.

‘I believe that our brave soldiers will defend the city, though I understand how difficult and hard it is for them,’ he said, adding he was in daily contact with the Metinvest managers who run the Azovstal and Illich Iron and Steel Works plants in Mariupol – that have been the scenes of heavy fighting in recent days.

On Friday, Metinvest said it would never operate under Russian occupation and that the Mariupol siege had disabled more than a third of Ukraine’s metallurgy production capacity.

Akhmetov praised President Volodymyr Zelensky’s ‘passion and professionalism’ during the war, seemingly smoothing relations after the Ukrainian leader last year said plotters hoping to overthrow his government had tried to involve the businessman. Akhmetov called the allegation ‘an absolute lie’ at the time.

‘And the war is certainly not the time to be at odds… We will rebuild the entire Ukraine,’ he said, adding that he returned to the country on February 23 and had been there ever since.

Akhmetov did not say where exactly he was, but that he had been in Mariupol on February 16, the day some western intelligence services had expected the invasion to begin. ‘I talked to people in the streets, I met with workers…,’ he said.

‘My ambition is to return to a Ukrainian Mariupol and implement our (new production) plans so that Mariupol-produced steel can compete in global markets as before.’

Russia invaded on February 24 when President Vladimir Putin announced a ‘special operation’ to demilitarise and ‘denazify’ the country. Kyiv and its Western allies reject that as a false pretext for an unprovoked attack on the country that has a Jewish leader (Zelensky), and where the far-right enjoys little-to-no public support. 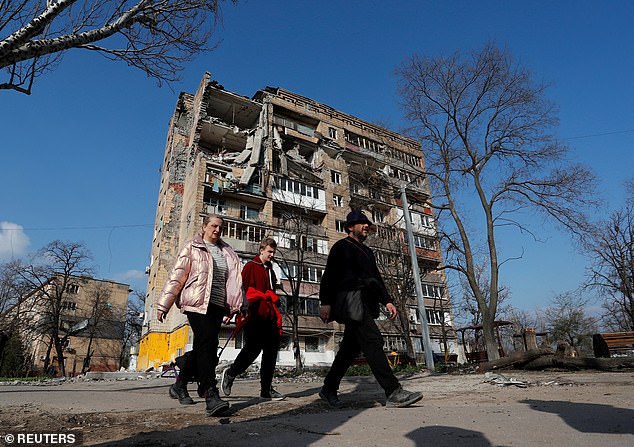 Local residents walk past an apartment building damaged during Ukraine-Russia conflict in the southern port city of Mariupol, Ukraine April 15, 2022 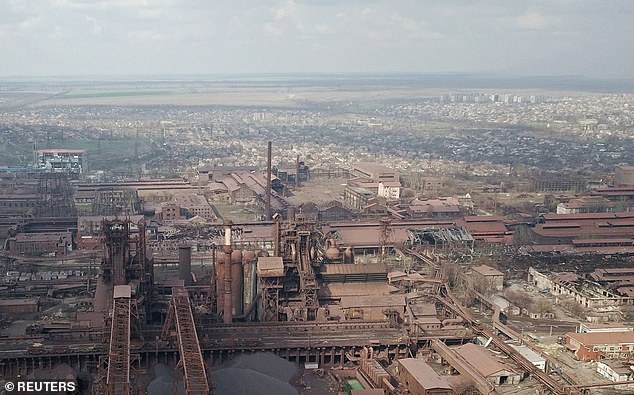 A view shows the Illich Steel and Iron Works during Ukraine-Russia conflict in the southern port city of Mariupol, Ukraine April 15, 2022. Akhmetov’s company Metinvest owns the factory and another in the city. Both have seen heavy fighting in recent weeks

According to Forbes magazine, Akhmetov’s net worth in 2013 reached $15.4 billion. It currently stands at $3.9 billion – a staggering drop off.

‘For us, the war broke out in 2014. We lost all of our assets both in Crimea and in the temporarily occupied territory of Donbas. We lost our businesses, but it made us tougher and stronger,’ he said.

‘I am confident that, as the country’s biggest private business, SCM will play a key role in the post-war reconstruction of Ukraine,’ he said, citing officials as saying the damage from the war has reached $1 trillion.

‘We will definitely need an unprecedented international reconstruction programme, a Marshall Plan for Ukraine,’ he said, in reference to the U.S. aid project that helped rebuild Western Europe after World War Two.

‘I trust that we all will rebuild a free, European, democratic, and successful Ukraine after our victory in this war.’ 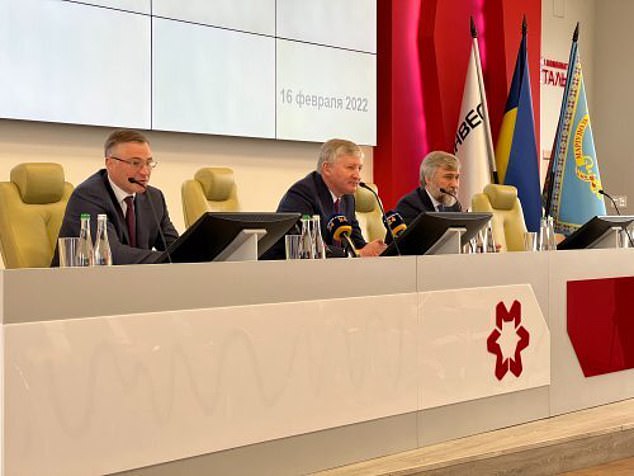 Pictured: Akhmetov is seen at the Azovstal plant in Mariupol on February 16, 2022 – a week before Vladimir Putin launched his invasion of Ukraine 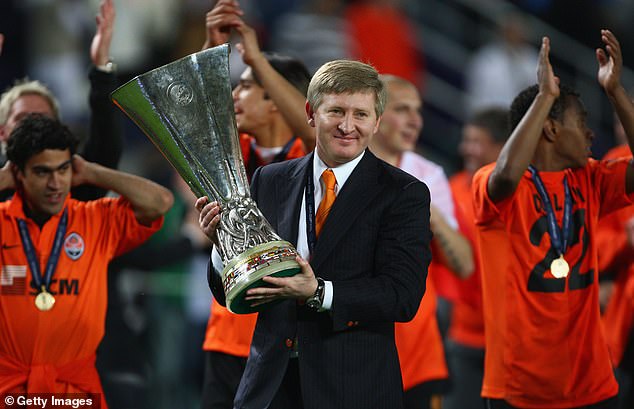 Mariupol, on the Sea of Azov in southeastern Ukraine, has seen the worst fighting of the seven-week-long war. Home to 400,000 people before Russia’s invasion, the city has been reduced to rubble by Russian shelling.

Over 20,000 civilians are believed to have been killed, tens of thousands remain trapped in the city, and countless numbers have fled. It is one of a number of sites were international investigators believe war crimes have taken place – including the bombing of a maternity war and of a theatre sheltering hundreds of people.

Amid fears that Mariupol could soon fall under complete Russian control, Ukraine said on Friday that it was still trying to break the siege of the city, as fighting raged around the city’s massive steel works and port.

If Moscow captures Mariupol, it would be the only big city to fall to the Russians so far. Russia’s defence ministry said it had captured the city’s Illich steel works. The report could not be confirmed.

Ukrainian defenders are mainly believed to be holding out in Azovstal, another huge steel works. Both plants are owned by Metinvest. 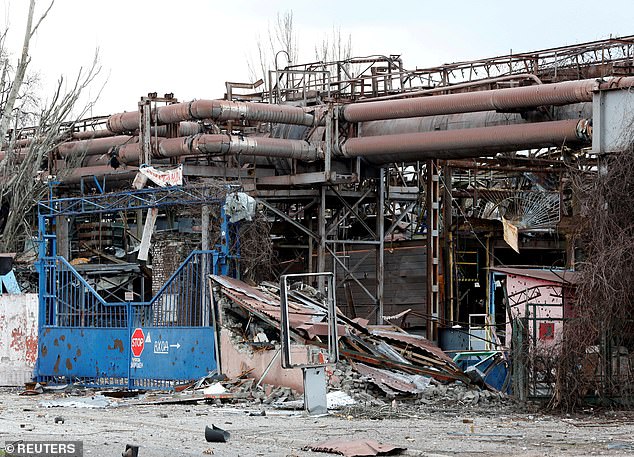 A view shows the gates of the Illich Steel and Iron Works damaged during Ukraine-Russia conflict in the southern port city of Mariupol, Ukraine April 15, 2022

‘The situation in Mariupol is difficult and hard. Fighting is happening right now. The Russian army is constantly calling on additional units to storm the city,’ defence ministry spokesperson Oleksandr Motuzyanyk told a televised briefing, although he said the Russians have not completely captured it.

Motuzyanyk said Russia had used long-range bombers to attack Mariupol for the first time since its Feb. 24 invasion.

Ukrainian President Volodymyr Zelensky said he discussed the fate of the besieged port city of Mariupol in a meeting on Friday with the country’s military leaders and the heads of its intelligence agencies.

‘The details cannot be made public now, but we are doing everything we can to save our people,’ Zelensky said in his nightly video address to the nation.

On Friday, it was alleged that Russian troops in Mariupol are digging up thousands of dead civilians and burning their bodies in mobile crematoriums in a possible bid to destroy evidence of atrocities like the ones discovered in Bucha and other towns outside Kyiv when the Russians withdrew from the region. 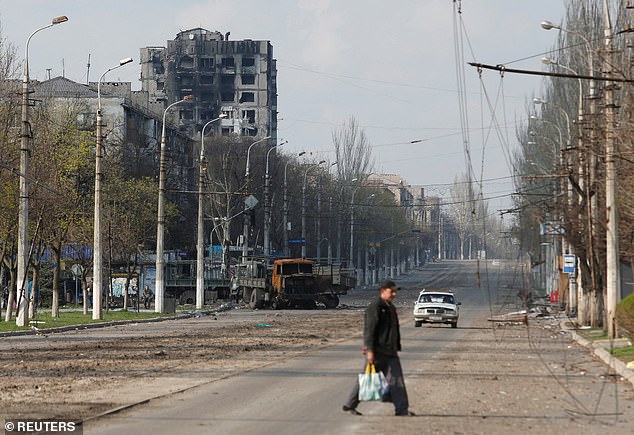 A local resident crosses a street damaged during Ukraine-Russia conflict in the southern port city of Mariupol, Ukraine April 15, 2022

Mariupol’s city council – in a post on Telegram – said Moscow’s men were exhuming bodies buried in residential courtyards within the city and were assigning watchmen to each square to stop locals from reburying their dead friends and relatives.

‘Why the exhumation is being carried out and where the bodies will be taken is unknown,’ the council said in a statement posted on the Telegram messaging app.

On Thursday, Mayor Vadym Boychenko warned corpses ‘carpeted the streets’ of Mariupol as he accused Moscow of incinerating tens of thousands of civilians killed during a siege that has trapped well over 100,000 civilians in desperate need of food, water and heating.

Russian forces have in recent days made advances in Mariupol with Moscow claiming on Wednesday that its troops had taken control of the final Ukrainian strongholds in the city including the Azovstal industrial complex, where Kyiv’s forces have been holed up in a hellish last stand for several days.

But Ukrainian marines who have teamed up with the Azov regiment to defend Mariupol yesterday appeared in a video to rebuff the claims as they denounced more than 1,000 fellow soldiers who surrendered to Russian forces on Wednesday and vowed to do ‘whatever it takes’ to protect the city.