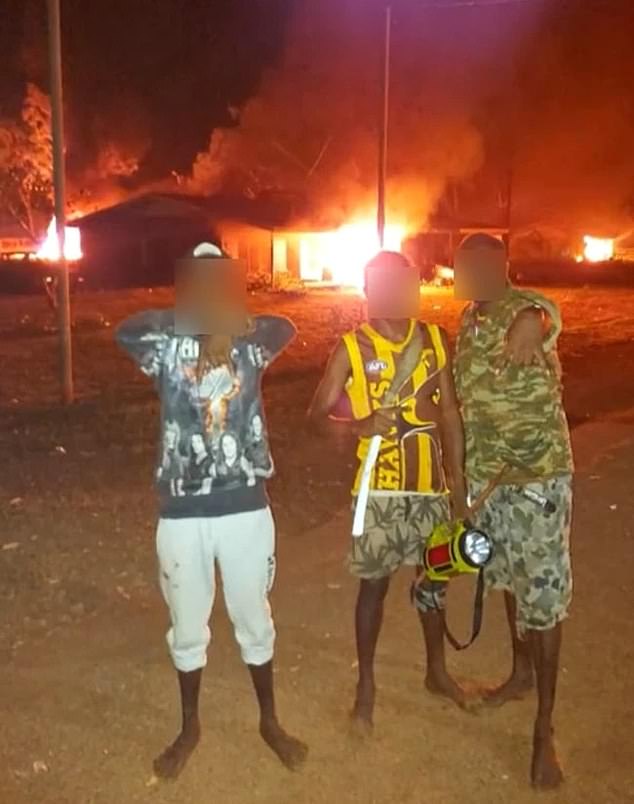 Up to 500 residents in an outback town have been forced to abandon their burnt down homes as a ‘war’ erupts between rival family clans.

Authorities are now sending in a taskforce to provide food and shelter to victims of the carnage in Wadeye, 400km southeast of Darwin in the Northern Territory.

Tensions in the remote Aboriginal community escalated in late March and have continued to rise since a 32-year-old man died last week from injuries sustained in a brawl.

While authorities are yet to announce an Emergency Declaration in the town, home to 22 clan groups, a multi-agency response taskforce is now underway.

Authorities are now sending in a taskforce to provide food and shelter to victims of the carnage in Wadeye (pictuerd), 400km southeast of Darwin in the Northern Territory.

In new footage of the chaotic scenes, large groups of men are seen wildly gesturing and yelling at each other in broad daylight.

Vehicles have been set alight and at least 37 homes have been extensively damaged in the community of about 4000.

Each home is said to usually house 10 people meaning hundreds of residents are currently homeless and without basic humanitarian needs.

A spokesman for NT Chief Minister Michael Gunner said the government would be coordinating efforts to ensure people had access to the essentials.

The cross-government response to carnage will provide impacted residents with food and supplies as well as sanitation, shelter, bedding, clothing and fuel.

‘All services operating in Wadeye have come together to provide as much support as they can with staff working extraordinary hours to assist people impacted by the unrest,’ a spokesman said. 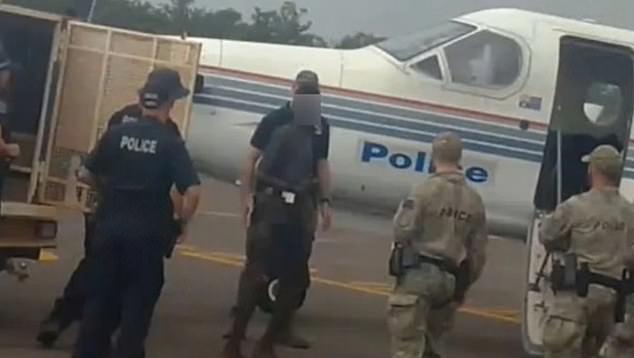 The Chief Minister’s department said at least 80 homes had been damaged and 37 destroyed and couldn’t provide a timeline for inevitable repairs.

‘Access to essential services and community wellbeing is the priority at this stage,’ the spokesman said, adding an on-ground assessment would be required.

Since February, NT Police have been making their presence known in Wadeye however it is unclear if patrols are deterring residents from violence.

NT Labor Senator Malarndirri McCarthy issued a statement on Wednesday saying women and children had been forced to flee into nearby bushland. 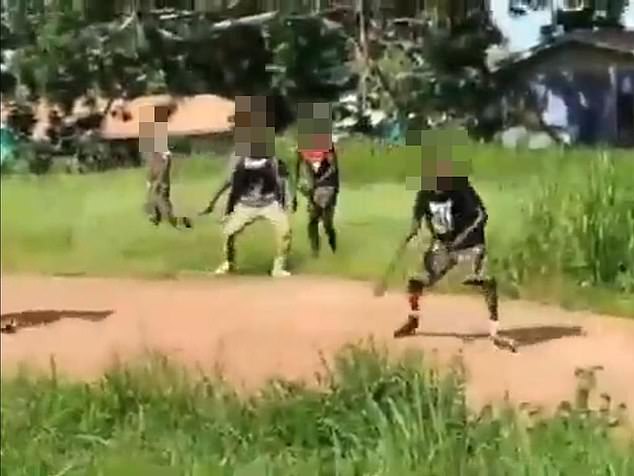 In new footage of the chaotic scenes in Wadeye, large groups of men are seen wildly gesturing and yelling at each other in broad daylight (pictured)

‘It’s unacceptable what is taking place in Wadeye, in terms of hundreds of people being forced out of town and into surrounding homelands and bush camps.’

The minister spent time speaking with community leaders, public servants and officers who were experiencing the unrest first-hand. 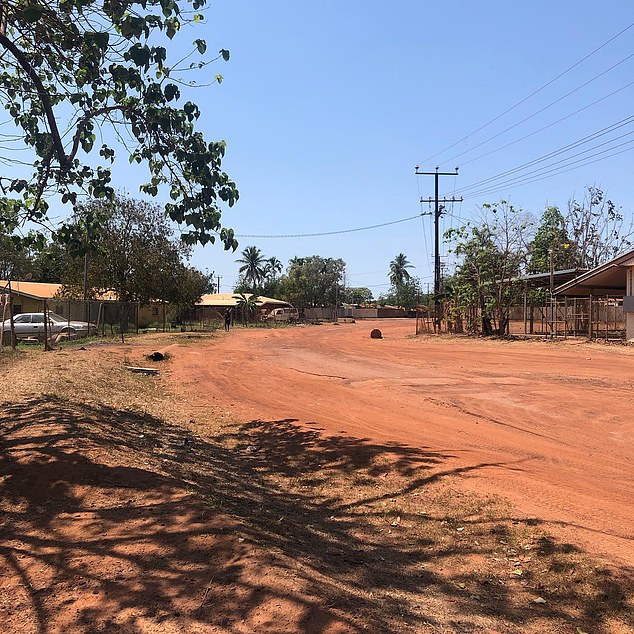 It comes as video of the scenes shows more than a dozen people smashing the windows and walls of a building during the night as onlookers yell and scream.

Residents say the argument has turned into a full-scale conflict, with members of the warring families walking down streets carrying ‘machetes and Bowie knives’.

‘Since that lad was killed its all picking up, it’s all revenge.’

The man, who wished to remain anonymous, said there have been riots every night since February, including one during which six cars exploded after being set alight.

There have also been reports of people being injured with cross bows and axes as well as cars being run off the road.

Superintendent Bradley Fox said ‘police have responded to numerous instances of violence within the community recently’.

‘It is believed historical tensions between local families are the cause of the unrest,’ he said on Wednesday.

Thamarrurr Development Corporation chief executive Scott McIntyre said residents have been living in fear and are unable to access vital services – including health centres, schools and aged care centres – due to the violence.

‘People are scared. People are feeling unsafe. People are literally at their wit’s end because they can’t sleep,’ Mr McIntyre said.

‘People are walking around the streets with machetes and Bowie knives — and it’s unclear if the police are removing the weapons.’

‘Not just for us as the asset managers but also for the community,’ she said.

‘It’s really devastating for the families that are in those homes.’

An estimated 10 people live in each home in remote NT communities, with Mr McIntyre estimating between 400-500 people could now be homeless.

He said the exodus has sparked supply shortages and overcrowding issues as displaced residents flee to neighbouring communities.

‘We ran out of fuel for a couple of days because there’s just a massive run on fuel from people trying to get out of town,’ he said. 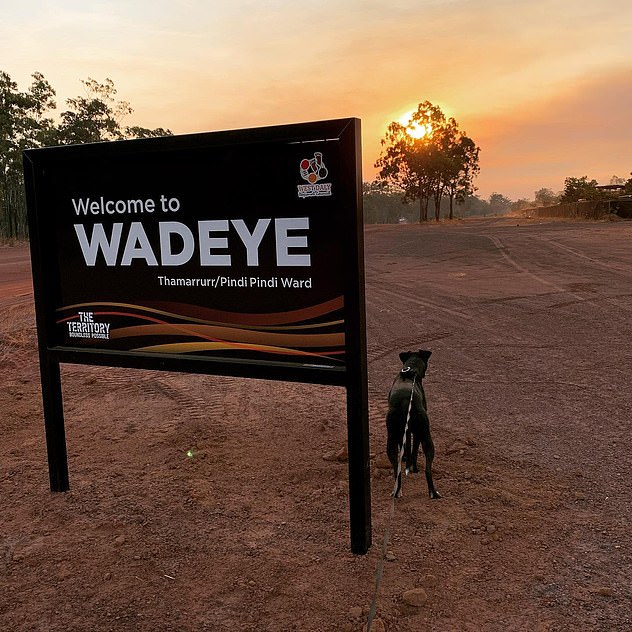 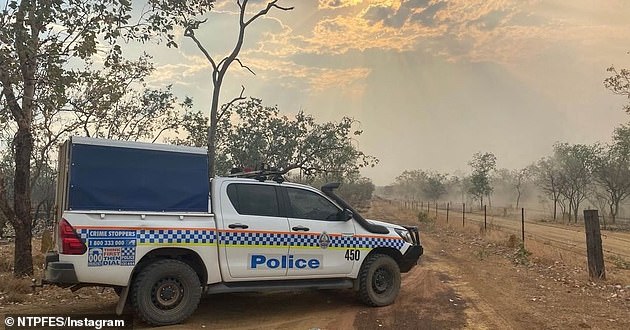 ‘People are taking their blankets out to the bush, people are heading out to Country and homelands.’

Minister for Territory Development Eva Lawler said historic issues were behind the violence.

Police are working to move at-risk community members out of the area and mediate a settlement with Elders to bring the unrest to an end.

Two other men were also injured.

Narndu has since appeared in the Darwin Local Court and his case was adjourned to Thursday when the teen is likely to apply for bail.

Pictured: British diver, 46, and his son, 14, missing off Malaysia as rescuers find...

The damning verdict on police who failed Rotherham victims