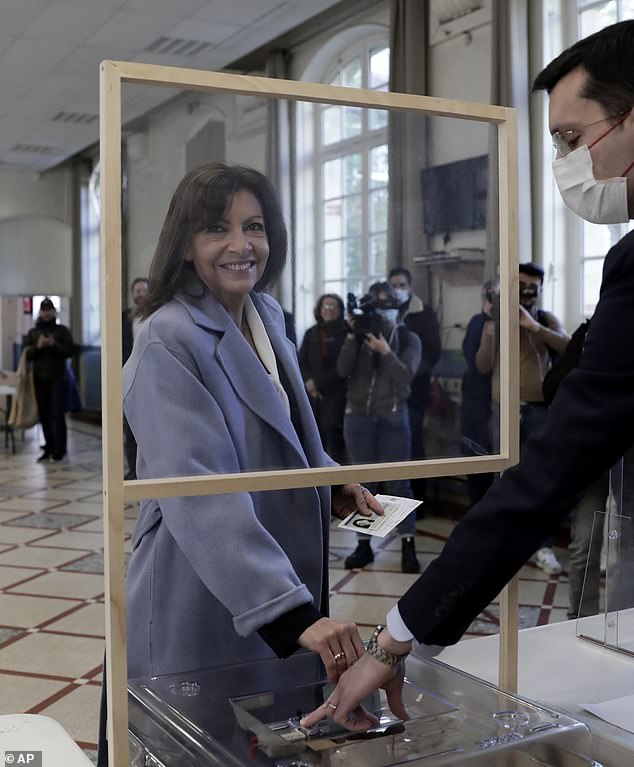 Voters have gone to the polls in France as Emmanuel Macron faces a showdown with Marine Le Pen to keep a grip on his presidency amid a surge in support for the far-right candidate among the young.

Up to 48 million eligible voters are choosing one of 12 candidates after polls opened at 8am local time on Sunday. They will close at 7pm (6pm BST) in most places and 8pm in some larger cities.

Former conservative president Nicolas Sarkozy and Parti Socialiste candidate Anne Hidalgo were among the first to cast their vote at polling stations in Paris today.

Unless someone gets more than half of the nationwide vote, there will be a second and decisive round on Sunday April 24.

Macron, a political centrist, for months looked like a shoo-in to become France’s first president in 20 years to win a second term.

But that scenario blurred in the campaign’s closing stages as the pain of inflation and of pump, food and energy prices roared back as dominant election themes for many low-income households. They could drive many voters on Sunday into the arms of far-right leader Marine Le Pen, Mr Macron’s political nemesis.

A new YouGov survey this week shows that more than half (56 per cent) of voters aged 18 to 24 would back Le Pen, whose National Rally party has vowed to clampdown on immigration, reassert France’s national identity and fine Muslims who wear headscarves in public.

Le Pen’s campaign has been mired by allegations of racism spread by Macron, and this week hit out at the President’s ‘extremely outrageous’ and ‘very aggressive’ claims.

French socialist presidential candidate Anne Hidalgo casts her vote in the first round of the French presidential election in Paris, France, on Sunday 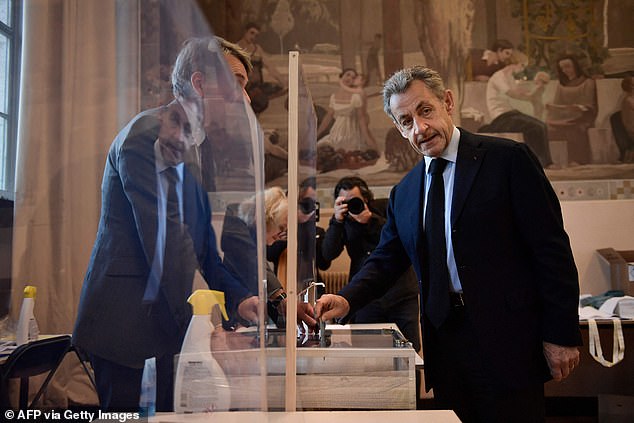 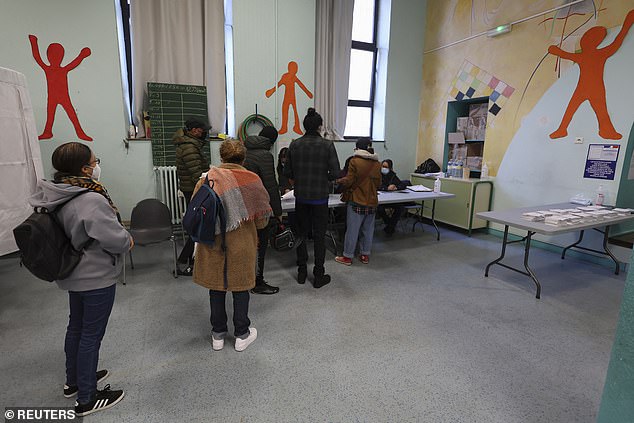 Up to 48 million eligible voters are choosing one of 12 candidates after polls opened at 8am local time on Sunday. Pictured: People queuing to vote at a polling station in Marseille today 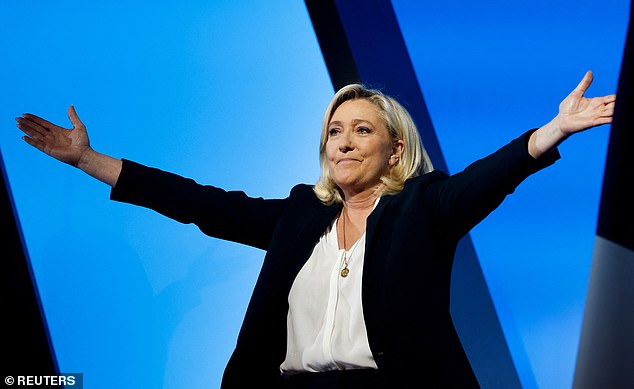 A new YouGov survey generated this week shows that 56 per cent of voters aged 18 to 24 would back Marine Le Pen. Pictured: Le Pen during a campaign rally this week 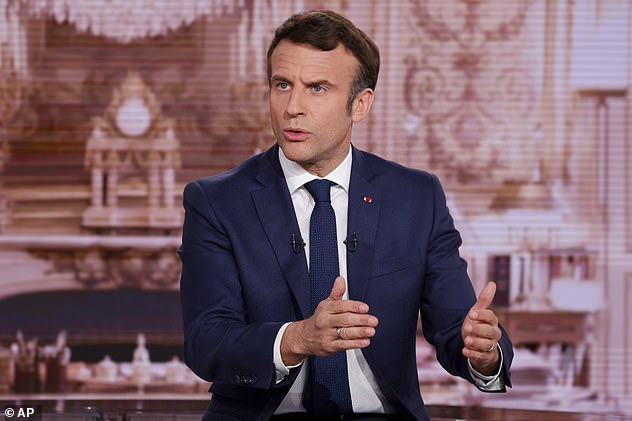 The latest prediction suggests that Mr Macron will win 27 per cent of the vote in the first-round election tomorrow. Pictured: Macron speaking on French TV station TF1 this week

I’m not a racist, says Marine Le Pen as she keeps closing the gap on Emmanuel Macron ahead of French election vote on Sunday – with one poll suggesting she could WIN second round

Marine Le Pen denied claims by Emmanuel Macron that she is racist – as her chances of becoming the first female President of France continued to grow.

The far-Right National Rally party candidate was angered by accusations by Macron, 44, that her bid to take over from him as head of state was grounded in hatred and bigotry of ethnic and religious minorities.

‘I challenge him to find a single proposal in my program that discriminates against the French because of their origin, their religion or the colour of their skin’, Le Pen said on Friday – two days before the 2022 French presidential election starts.

Speaking on FranceInfo radio, she said: ‘I find the remarks of the President of France extremely outrageous,’ adding that he had become ‘very aggressive since he entered the campaign.’

Macron had earlier spoken about Le Pen’s ‘racist programme,’ which includes proposals for a mass clamp down on immigration.

Despite such attacks, polls suggested there was very little between the two candidates, who are favourites to go through to the second round of voting for a head-to-head.

A shock poll by Brazilian firm Atlas Politico placed Le Pen ahead of the incumbent head of state, giving her 50.5 per cent of the vote ahead of Macron on 49.5 per cent. Such as result would hand Le Pen the presidency.

If re-elected, Macron would have a five-year mandate to impose his vision of reform which would include a crack at reducing the pension age in defiance of union anger.

He would also seek to consolidate his position as the undisputed number one in Europe after the departure of German chancellor Angela Merkel.

Analysts question whether Macron would enjoy the same support from a broad anti-far right ‘Republican front’ coalition that helped him win in 2017 and allowed Jacques Chirac to demolish Marine Le Pen’s father Jean-Marie in 2002.

The latest prediction suggests that Macron will win 27 per cent of the vote in the first-round election tomorrow, with Le Pen taking 22 per cent.

They would then battle for votes in the lead up to April 24.

Greens candidate Yannick Jadot, the Republicans’ Valerie Pecresse and the flagging Socialist nominee Anne Hidalgo appear certain to be ejected in the first round.

Far-right former TV pundit Eric Zemmour made a re-entry into the campaign last year but lost ground, and analysts say he has aided Le Pen by making her appear more moderate.

Macron has called for a ‘mobilisation’ of his supporters, and said that Brexit proves that Le Pen could win with her far-Right views.

‘When it comes to correcting social inequalities at their root, we have begun the work, but we are very far from having succeeded,’ he told online news outlet Brut in a long interview, pledging also to do more to fight climate change.

One 25-year-old who has been circulating Le Pen leaflets said that her nationalist ideologies appealed to alienated young people.

‘Our generation has known all kinds of problems. We’ve always seen war on the TV,’ David Quentin told the Telegraph.

‘We’ve always known economic crisis and terrorism, environmental problems. It’s always felt like the end of the world to us. We’ve lost our point of reference, as a country.’

But this support for Le Pen may not lead to a victory, as a record-breaking 31 per cent of voters may abstain this year.

Young voters are the most likely to steer clear of the ballot box, feeling a disconnect between themselves and the candidates.

Mélenchon, the Left’s favourite among the youth vote, has been described as the country’s answer to Jeremy Corbyn.

His views have prompted a mixed response among younger people. 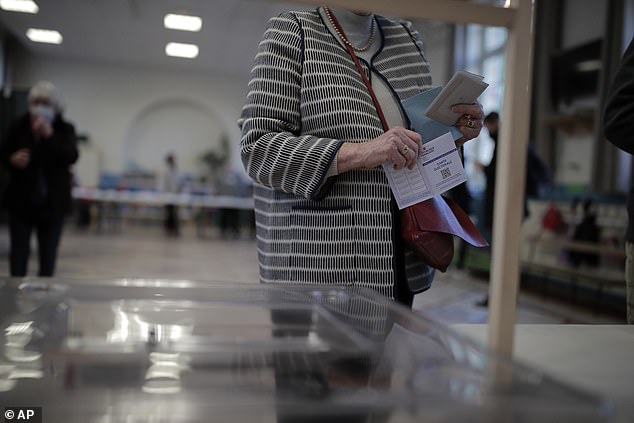 A woman waits to cast her vote in the first round of the French presidential election in Paris, France, early on Sunday 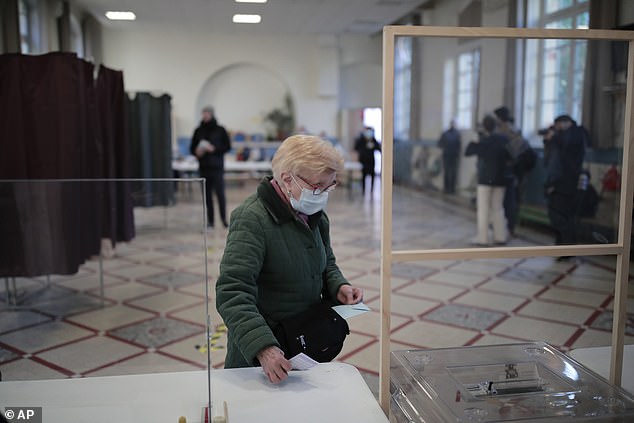 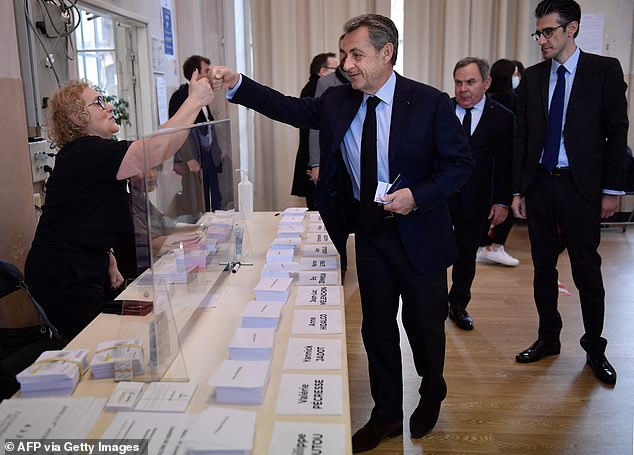 Ex-French President Mr Sarkozy, centre, greets an electoral official as he casts his ballot for the first round of France’s presidential election at a polling station in Paris today 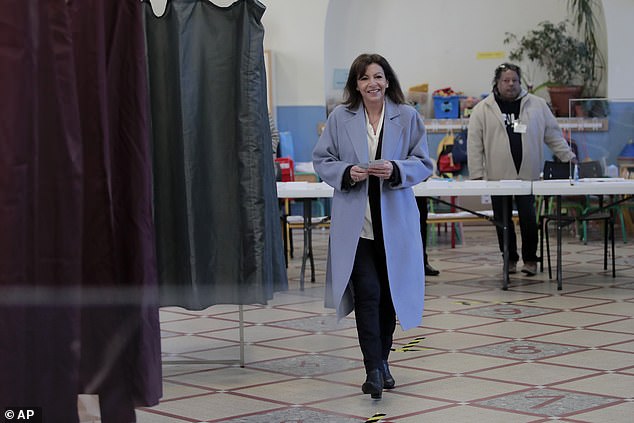 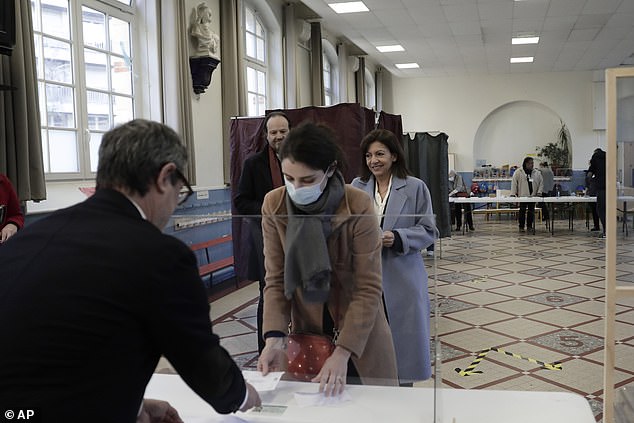 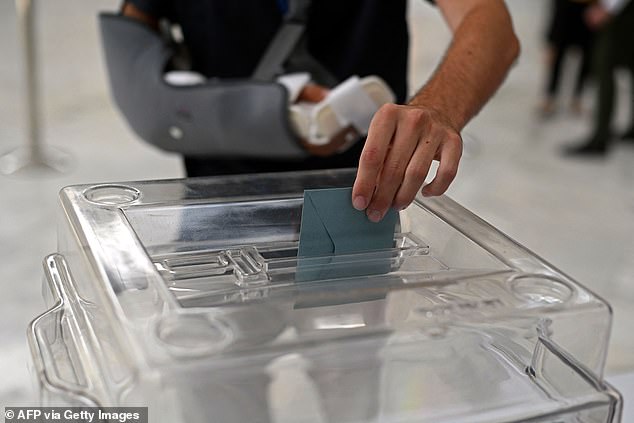 One 25-year-old intern told the paper ‘the far-Right and the awful candidate just next to it’ were both unappealing.

‘Going to vote would mean putting my faith in a system that I know can’t satisfy my choices, so I’m not very interested in it, Étienne Sellier said.

The biggest voter population expected to take part on Sunday are older and wealthier people. And they are more likely to support Mr Macron.

‘There is an uncertainty ahead of the first round,’ said French political scientist Pascal Perrineau, pointing to unprecedently high numbers of voters who were still undecided or who changed their minds during the campaign as well as absentee voters.

Analysts fear that the 2002 record of the numbers of French voters boycotting a first round of 28.4 percent risks being beaten, with the 2017 absentee rate of 22.2 percent almost sure to be exceeded.

Some 48.7 million voters are registered across France to vote in this election. 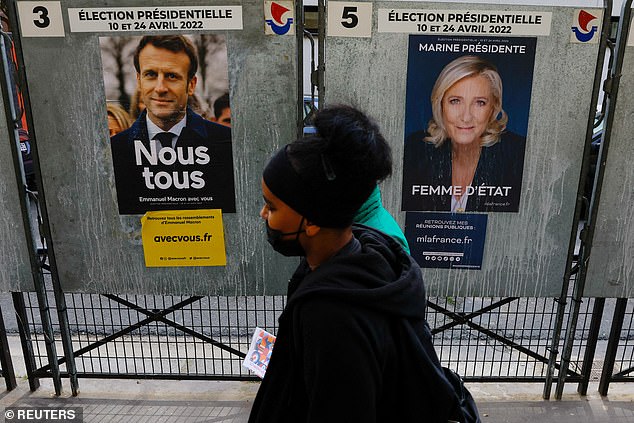 Some younger people feel that both Mr Macron and Ms Le Pen are unappealing, as a record-breaking 31 per cent of voters may abstain this year 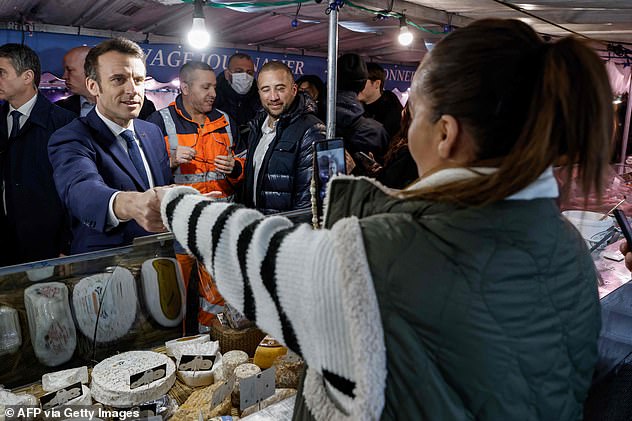 Macron visited a market in Neuilly-sur-Seine, near Paris yesterday after a radio appearance on the last day of campaigning ahead of the vote tomorrow

Frederic Dabi, director of the Ifop polling institute, said: ‘We have experienced a strange campaign that was at odds with what we experienced in the past presidential elections.’

All further political activity by candidates was banned on the final day before polls open in mainland France.

French overseas territories began voting earlier to take account of the time difference, starting with the tiny island of Saint Pierre and Miquelon off the coast of Canada whose voters cast ballots from 10am today.

Territories in the Caribbean followed a few hours later, with Pacific island voters casting their ballots from 6pm and then finally the Indian Ocean territories before polling stations open in mainland France.

Macron has argued that he is the best person to lead the country during the Ukrainian war, but has been less active on the campaign trail than Le Pen.

This has boosted the far-Right candidate, whose poll ratings have been mostly impacted by the Russian loan her party is repaying and her previous support of Putin’s annexation of Crimea.

Could China’s Covid chaos send world straight back to square one?