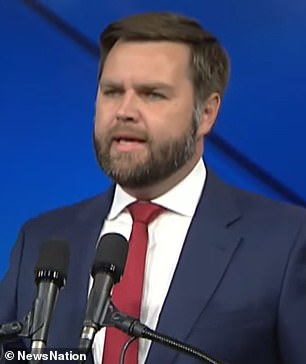 Ohio Republican Senate hopeful J.D. Vance blasted his Democratic rival, Rep. Tim Ryan Monday, suggesting the raped 10-year-old Ohio girl forced to get an abortion in another state wouldn’t have been put in that position had Democrats secured the border.

‘Do your job on border security, don’t lecture me on opinions I don’t actually have,’ Vance added.

The debate featured an hour of Vance and Ryan slinging insults at each other, with Ryan – who’s represented the Youngstown area for more than 20 years – characterizing Vance, the author of Hillbilly Elegy, as a political extremist and a Silicon Valley swindler.

‘Ohio needs an a** kicker, not an a** kisser,’ Ryan said, pointing to Vance’s steadfast support of former President Donald Trump, after criticizing him during his 2016 prseidential run.

At an Ohio rally last month, Trump said Vance was ‘kissing my a**’ for support.

‘We need leaders who have courage to take on their own party – and I’ve proven that – and he was called an a**-kisser by the former president,’ Ryan said.

The Democrat also smacked Vance for repeating Trump’s election denial lies, helping fund the insurrectionists’ defense and for campaigning with and supporting certain members of the Republican Party. 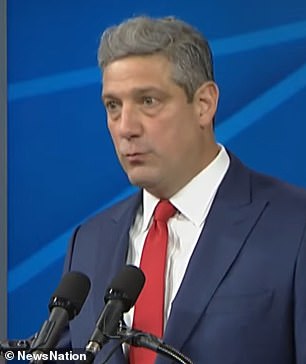 Ohio Republican Senate hopeful J.D. Vance (left) blasted his Democratic rival, Rep. Tim Ryan (right) Monday, suggesting the raped 10-year-old Ohio girl forced to get an abortion in another state wouldn’t have been put in that position had Democrats secured the border 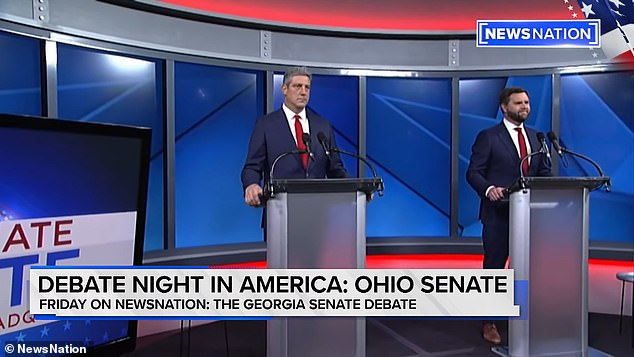 Rep. Tim Ryan (left) and author J.D. Vance (right) spent an hour slinging insults at each other Monday night, with Ryan characterizing Vance as a political extremist and a Silicon Valley swindler, and Vance suggesting Ryan hadn’t gotten anything done in his 20 years in Congress

‘That’s why I’m running to represent the exhausted majority – Democrats, Republicans and independents, against the extremists,’ Ryan added.

In turn, Vance suggested Ryan did nothing to help his Rust Belt district, pushing that the longtime lawmaker had never helped create any jobs, while Vance ran a business.

‘So your consultants gave you this line and you don’t actually know it,’ Vance said at one point, when Ryan bungled an attack line about how Vance had invested money in China.

At another point, Vance compared career politicians to ‘toddlers,’ saying they ‘accuse you of doing the very thing that they do themselves all the time.’

‘I’m not going to apologize for spending 20 years of my adult life slogging away to try and help one of the hardest economically hit regions of Ohio. And dedicated my life to help that region come back,’ Ryan hit back. ‘JD you went off to California, you were drinking wine and eating cheese.’

Much of the first half of the debate was dedicated to abortion, with Vance saying he remained pro-life and Ryan saying he wanted to return the country to Roe v. Wade.

‘He supports a national abortion ban, in which he wants women to have to get a passport and go to Canada,’ Ryan claimed. ‘We’ve got to have some moderation on this issue. He’s got a very extreme position.’

‘J.D. you called rape inconvenient, right?’ Ryan asked, referring to headlines that said as much, despite Vance’s campaign saying the Ohio Republican’s words were taken out of context. ‘Rape is not inconvenient, it’s a significant tragedy.’

‘This is the largest governmental overreach in the history of our lifetime,’ Ryan said more broadly about the Supreme Court’s Dobbs decision.

That’s how the two men got onto the topic of the 10-year-old girl who had to travel to Indiana to obtain an abortion. An undocumented immigrant, Gerson Fuentes, has been charged with two counts of rape.

Ryan also had to answer to why he was previously pro-life, but today supports abortion rights.

‘I had some very personal conversations with women in Ohio, who had gone through tragedies who needed to have abortions for a variety of different reasons,’ Ryan said.  ‘And I just came to realize through the course of these conversations, that the government has no place in this matter, that this needs to be left to the woman.’

On other social issues, Vance expressed he would vote against a piece of legislation codifying gay marriage because it would open religious institutions to lawsuits.

Both candidates supported a loosening of restrictions around pot, though Vance warned the country shouldn’t be ‘soft on crime.’

‘Those people should go to prison,’ Vance said.

Vance remained supportive of Trump through his many legal troubles.

‘I’ve seen nothing that suggests the president of the United States be thrown in prison,’ Vance said.

He was less gung-ho about the GOP’s Senate Leader Mitch McConnell staying at the top of his party.

‘Whoever runs,’ he answered when asked who should be Senate Republican leader. ‘Presumably Mitch McConnell will run, if somebody else runs we can have that conversation.’

‘Kamala Harris is absolutely wrong on that,’ he said at one point refuting how the vice president had said the southern border is secure.

The congressman also repeated something he’d hinted before: that he didn’t want President Joe Biden to run for re-election.

‘No, I’ve been very clear I’d like to see a generational change. Mitch McConnell, Donald Trump, the president, everybody. We need a new generation of leadership,’ Ryan said.

House of the Dragon: King Viserys has passed away as Queen Alicent prepares

Killer was lying in wait with a tiny silver hatchback as Yusuf Nazlioglu parked...

First home buyers from NZ to the US and Canada can raid their superannuation...