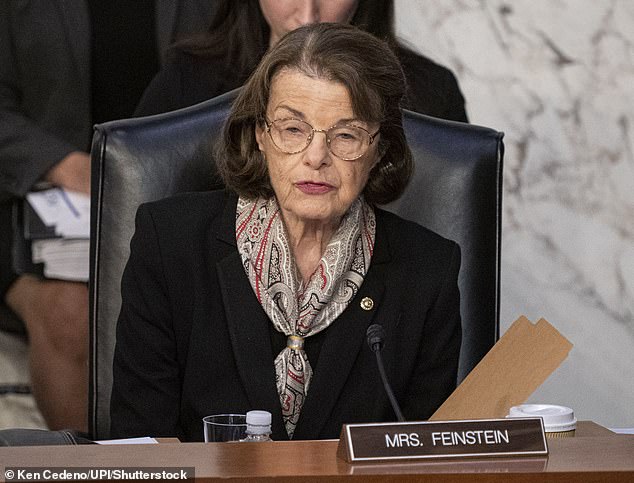 California Senator Dianne Feinstein said she won’t step down from her position before it ends in 2024, despite democratic colleagues saying they’re concerned she’s ‘mentally unfit to serve.’

Feinstein, 88, said she ‘regularly’ meets with leaders and isn’t ‘isolated,’ after four senators – three of them Democrats – a California Congress member, and three former staffers said that her short-term memory is deteriorating.

‘I see people. My attendance is good. I put in the hours. We represent a huge state. And so I’m rather puzzled by all of this,’ she told the San Francisco Chronicle.

Feinstein, one of the longest-serving senators, had long been renowned in Washington for an issue-focused passion and quick wit, but now people who have worked with the California lawmaker for years now say she has difficulty recognizing them and repeats the same few talking points.

The senator said no one had brought up these concerns to her directly.

‘No, that conversation has not happened,’ she told the Chronicle. ‘The real conversation is whether I’m an effective representative for 40 million people.’

Talk has been floated of persuading her to resign before her current term ends in 2024.

Senator Dianne Feinstein, 88, said she won’t step down from her position before it ends in 2024, despite democratic colleagues said they’re concerned she’s ‘mentally unfit to serve’ 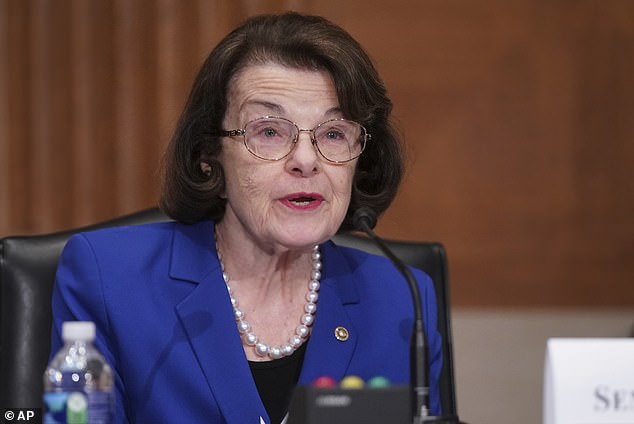 She said she ‘regularly’ meets with leaders and isn’t ‘isolated,’ after four senators – three of them Democrats – a California Congress member, and three former staffers said that her short term memory is deteriorating

A staffer from another senator’s office has also been quoted saying they’ve seen their boss go out of their way to re-introduce themselves to Feinstein before speaking to her.

‘We’ve got an ‘Emperor’s New Clothes’ problem here,’ an unnamed California lawmaker said, referencing a fable about fearing to speak truth to power.

‘I have worked with her for a long time and long enough to know what she was like just a few years ago: always in command, always in charge, on top of the details, basically couldn’t resist a conversation where she was driving some bill or some idea. All of that is gone,’ they said.

The member of Congress described an hours-long conversation in which they had to reintroduce themselves to the veteran senator multiple times and circling back to the same questions without any indication she knew they’d already covered it.

The lawmaker said: ‘She was an intellectual and political force not that long ago, and that’s why my encounter with her was so jarring. Because there was just no trace of that.’

That and the other interactions described in the report occurred before the death of Feinstein’s husband in February of this year.

These so-called ‘memory lapses’ are punctuated by days where Feinstein is ‘nearly as sharp as she used to be,’ the Chronicle reports. ‘But some close to her said that on her most difficult days, she does not seem to fully recognize even longtime colleagues.’

One Democrat senator said: ‘It’s bad, and it’s getting worse.’ 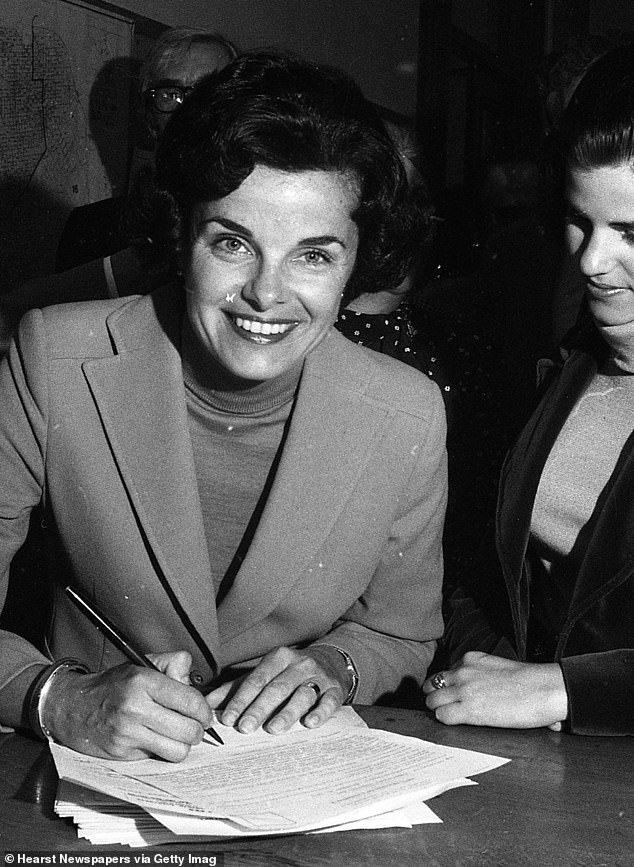 Feinstein was reportedly ‘composed’ during future Supreme Court Justice Ketanji Brown Jackson’s confirmation hearings in March, though the Chronicle also notes she ‘repeated comments’ about Jackson’s composure during the grilling.

A Capitol Hill staffer said a ‘joke’ has emerged about the 40million-strong state’s representation in the Senate: ‘We’ve got a great junior senator in Alex Padilla and an experienced staff in Feinstein’s office.’

But it’s also got people in Congress worried the octogenarian can ‘no longer fulfill her job duties without her staff doing much of the work’ to represent her constituents.

‘It’s really hard to have a micromanager who is not fully remembering everything that we’ve talked about,’ said one ex-staffer, who described a situation in which Feinstein allegedly delayed the progress of an important investigation because, the aide believed, she could not fully comprehend it.

‘My biggest concern is that it’s a real disservice to the people of California.’

The report notes that Feinstein is seen with at least one staffer at all times in the Capitol, and that she’s dramatically decreased the pace of her public appearances.

California’s senior senator has not held a town hall in more than four years, the Chronicle stated, and she often declines lengthy interviews with journalists.

Feinstein’s office told the Chronicle that she’s attended numerous public events in the years-long gap but that they ceased in 2022 because of her husband’s death and the COVID-19 pandemic. 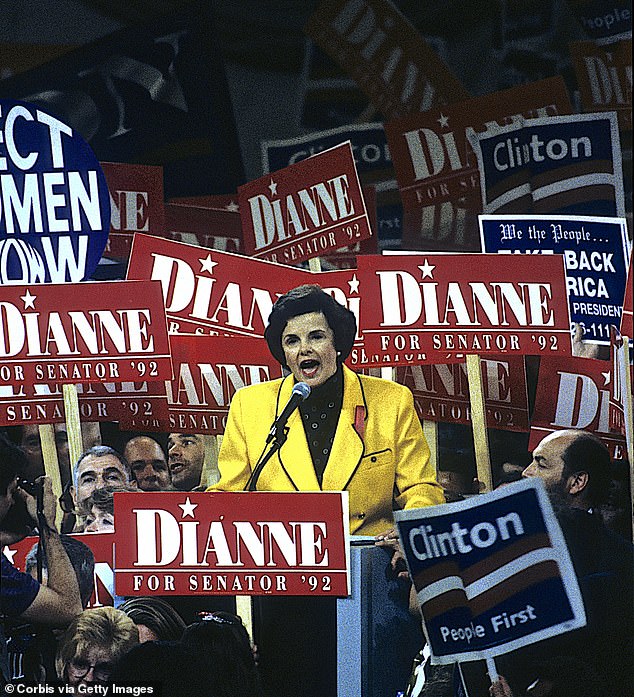 She was serving as the San Francisco Board of Supervisor’s first female president when she gained national attention for leading the city through the infamous 1978 assassinations of Mayor George Moscone and City Supervisor Harvey Milk, the first openly gay man to be elected in California politics (pictured in 1992) 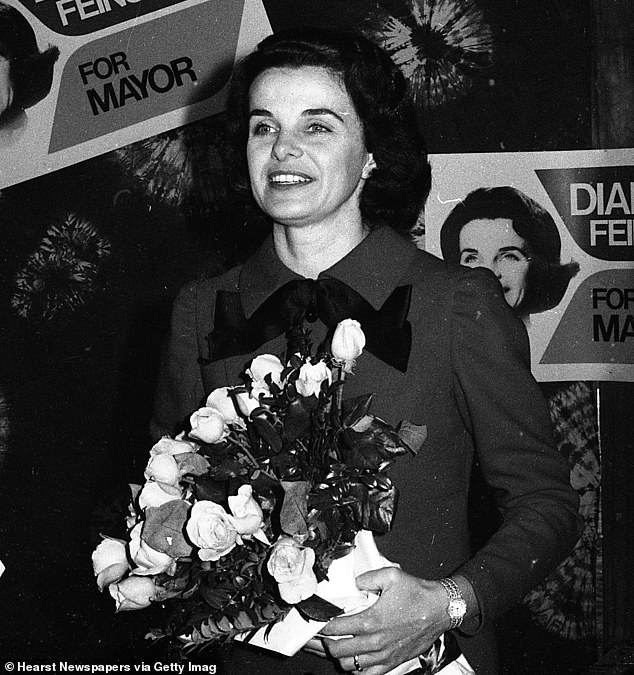 Feinstein in 1971, when she was running for Mayor

‘The last year has been extremely painful and distracting for me, flying back and forth to visit my dying husband who passed just a few weeks ago,’ Feinstein told the Chronicle in a statement though rejected a live interview.

‘But there’s no question I’m still serving and delivering for the people of California, and I’ll put my record up against anyone’s.’

Campaign filings that cover 2021 show Feinstein only raised $5,566.33 across that entire year, a low number for someone with her years-long ties in top political circles in Washington and California.

Feinstein’s fellow octogenarian senator, Patrick Leahy of Vermont, raised $1,001,415.87 last year. Leahy is retiring at the end of his term in 2022, though it’s common for veteran lawmakers to keep raising money for their party and colleagues in active campaign accounts until they leave office.

The 88-year-old senator is widely seen as a trailblazer in California politics. She was serving as the San Francisco Board of Supervisor’s first female president when she gained national attention for leading the city through the infamous 1978 assassinations of Mayor George Moscone and City Supervisor Harvey Milk, the first openly gay man to be elected in California politics.

After winning a 1992 special election, Feinstein became the first woman to represent the Golden State in the Senate.

Former Senator Barbara Boxer, 81, was sworn in as the second shortly after. Boxer retired in 2017 and was succeeded by Harris.

Her seniority has also given Feinstein some of the most powerful committee assignments in the chamber, including on the Judiciary and Select Committee on Intelligence, giving her access to sensitive information and some of the most influential decisions in Congress — which also gives staffers pause given her advanced age, the report claims.

Still, other Democrats defended Feinstein as sharp and as focused as ever.

California’s junior senator Padilla said he’d ‘heard some of the same concerns’ but brushed them off when asked by the Chronicle.

‘But as someone who sees her multiple times a week, including on the Senate Judiciary Committee, I can tell you she’s still doing the job and doing it well,’ Padilla said.

‘Senator Feinstein is a workhorse for the people of California and a respected leader among her colleagues in the Senate,’ Pelosi said, adding that Feinstein was ‘constantly traveling’ across the country to fulfill her duties.

It’s ‘unconscionable that, just weeks after losing her beloved husband of more than four decades and after decades of outstanding leadership to our City and State, she is being subjected to these ridiculous attacks that are beneath the dignity in which she has led and the esteem in which she is held,’ Pelosi concluded.

But the Democrat lawmaker who described their awkward hours-long conversation with Feinstein summarized the delicate discussion about the senator’s future compared with her long history of serving the country.

‘It shouldn’t end this way for her. She deserves better,’ they said.

However, they added that ‘Those who think that they are serving her or honoring her by sweeping all of this under the rug are doing her an enormous disservice.

Ant and Dec beam as they reunite with SMTV co-star Cat Deeley for an...

The Queen boogied to Elton John… and many more royally entertaining nuggets by IAN...

Financial Reports you Should Provide your Clients.

Firefighters will vote on strike action after rejecting 5% pay deal