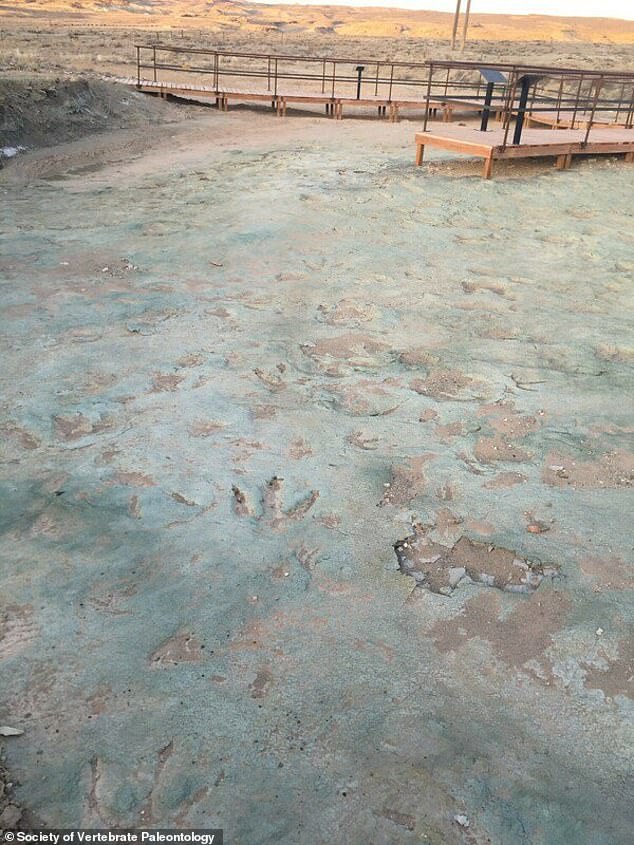 Dinosaur tracks as old as 112 million years have been wiped from history in southeastern Utah by heavy machinery used to rebuild a boardwalk at the popular tourist area, U.S. officials say.

The damage at the Mill Canyon Dinosaur Tracksite, near Moab, includes several of the footprints getting fractured around the rims, the U.S. Bureau of Land Management (BLM) recently said in a report.

The agency claims the damage is minor but a non-profit group that monitors the popular tourist site disagrees.

Construction equipment provided by the bureau, including a backhoe, had ‘driven directly over the fossil dinosaur tracks, permanently destroying as much as 30 percent of the site,’ according to a letter from the non-profit Center for Biological Diversity.

The agency also said an area where a prehistoric crocodile crossed a mud flat appeared to have been driven over multiple times by the backhoe, causing fracturing, the Salt Lake Tribune reported.

The site is considered among the most important dinosaur track areas in the nation, containing 200 prints from at least ten different species, including those of sharp-clawed raptors like the three-toed theropods, as well as long-necked sauropods and ancient relatives of the crocodile.

More than 200 separate footprints of dinosaurs, and ancient crocodiles, have left their mark at the Mill Canyon Dinosaur Tracksite 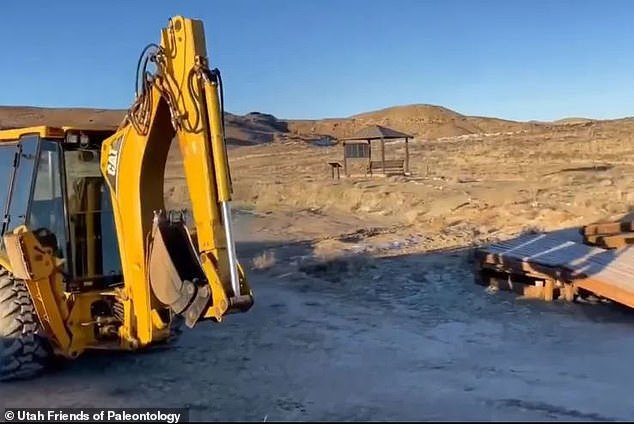 A backhoe and parts of a torn-up boardwalk at Mill Canyon Dinosaur Tracksite, near Moab, Utah, contributed to the damage done to several ancient dinosaur footprints in January

The Society of Vertebrate Paleontology, a scientific non-profit organization, sent an open letter to the Bureau’s state director in Utah, Greg Sheehan, saying it was afraid that ‘irreparable and avoidable, damage’ had been done and that more caution could have been taken if ‘qualified paleontologists had been on your staff.’

The Center for Biological Diversity also voiced its concerns, sending a cease-and-desist letter to Sheehan, indicating grounds for legal action if the construction didn’t stop.

In response, the federal agency said the project should be reevaluated, the area clearly marked and work crews briefed on where they can and can’t go.

The report also noted that the agency should fill a vacancy for a regional paleontologist that has been vacant since 2018.

‘To ensure this does not happen again, we will follow the recommendations in the assessment, seek public input, and work with the paleontology community as we collectively move forward on constructing boardwalks at the interpretive site,’ the agency said.

That revised report should be done this summer.

‘It’s good that we stopped more damage from happening,’ said Jeremy Roberts, among those who sought to have the Bureau of Land Management pause the project. ‘But this will continue to plague the state until we get a paleontologist.’

Concerns over construction in the area have previously existed with a raised boardwalk being built at the site in 2015. Used by thousands of visitors on a yearly basis, the walkway ‘would ensure that the public would not walk directory on the tracks and would also improve safety,’ an assessment regarding plans to build a new metal and concrete trail read in October 2021.

‘There would be no risk to the trackway from construction activities,’ the assessment further read. 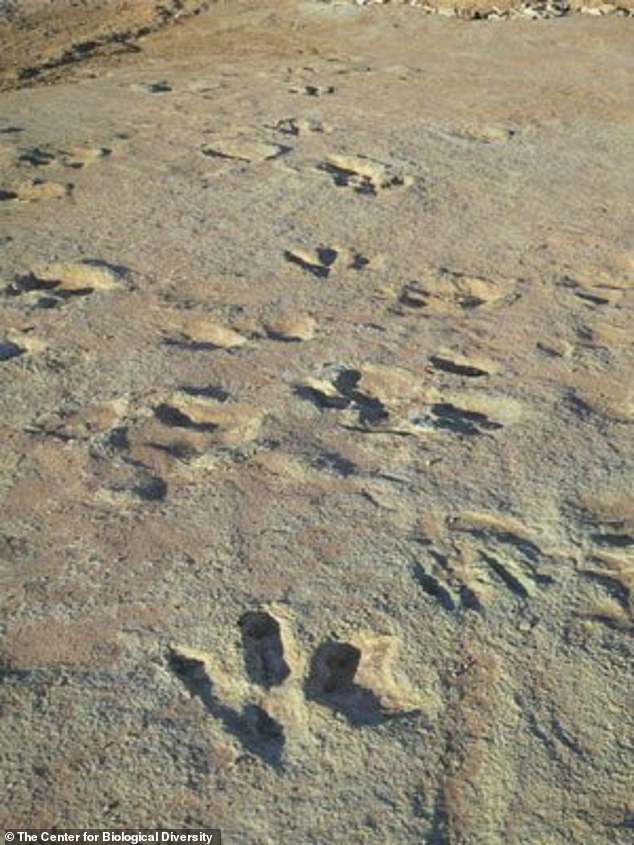 Paleontologists and non-profit organizations with a focus on fossil preservation have voiced their concerns to the US. Bureau of of Land Management about the agency’s plans to construct in the area, seeing them as a potential threat to the tracks 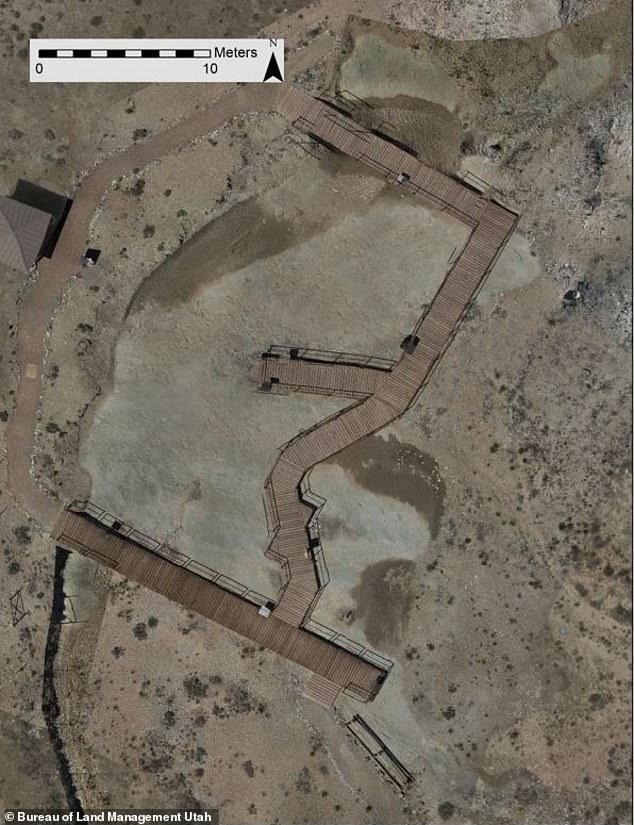 In response, the US. Bureau of of Land Management has said that it will revise its plans to build a brand new walkway. Pictured: The walkway at the Mill Canyon Dinosaur Tracksite, covering 1.80 miles

The Bureau’s Moab Field Office didn’t consult with professional paleontologists or even notify the Gastonia Chapter, which had been helping maintain and watch over the site. The apparent damage reported was done by a demolition contractor crew without on-site supervision.

The first concern regarding the construction crew’s work at the site emerged in late January when a former volunteer steward at Mill Canyon, Susan Sternberg, noticed a backhoe at the site before getting in touch with Lee Shenton, president of the Moab chapter of Utah Friends of Paleontology.

The chapter’s president and other geologists emphasized on the lack consultation from a paleontologist, although they did not yet know the impact of the damage done to the fossils by construction.

‘There is damage and there is no reason there should be any damage,’ said Utah state paleontologist Jim Kirkland in his report provided to Deseret News. ‘It is not completely destroyed as some people were suggesting, but I was pretty scared.’

He added that the done damage could have been completely avoidable.

Shenton, who helped document the damage, said he noticed the boardwalk – usually shaped in the form of a horseshoe – being dissimilated and its parts being set aside on top of the fossils. He also observed tire tracks on the ground that had smothered ichnofossils, which are fossil records of biologic activity, noticeably those of three-toed theropods, long necked sauropods and primitive relatives of crocodiles.

Fossils at the site can be easily damaged due to severe weather conditions, humans stepping on them or even dirt.

Prince Harry WAS told King Charles was going to replace him as Captain General...

Aaron Carter, the child star who recorded his first album at NINE