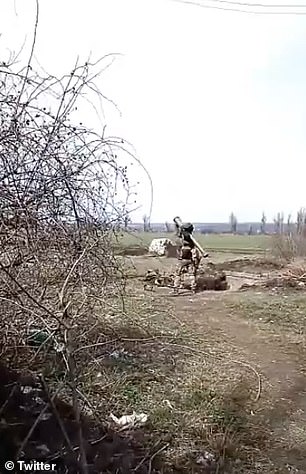 Ukrainian troops cheered and celebrated after they shot down a Russian drone with a British-made missile.

Video shows a Ukrainian soldier firing the laser-guided missile that travels at more than three times the speed of sound at the unmanned aerial vehicle (UAV) in Ukraine.

The UK-made Starstreak missile took down the Russian Orion drone in Ukraine, prompting cheers from the Ukrainian troops.

One soldier could be seen swearing at the wreckage with his middle finger as it tumbled from the sky. 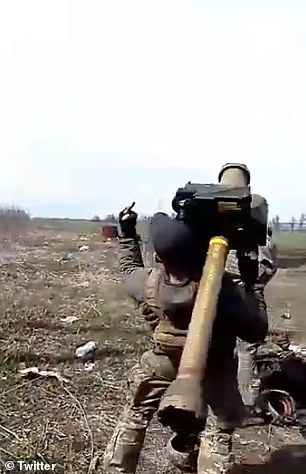 Video shows a Ukrainian soldier firing the British-made missile that travels at more than three times the speed of sound at the unmanned aerial vehicle (UAV). The soldier could be seen swearing at the wreckage with his middle finger as it tumbled from the sky 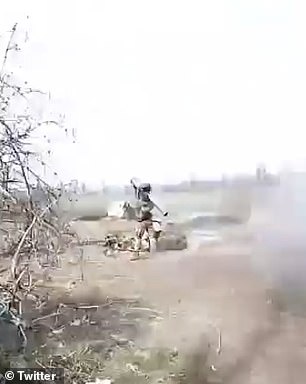 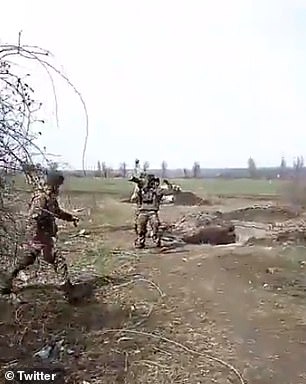 The UK-made Starstreak missile took down the Russian Orion drone in Ukraine, prompting cheers from the Ukrainian troops

What are Starstreak missiles?

The Starstreak high-velocity surface-to-air missile is designed to defend against conventional air threats like fixed wing fighter planes and helicopters.

It is made in Belfast by the company Thales Air Defence.

The missile has a range of more than 7km and carries a three dart payload. 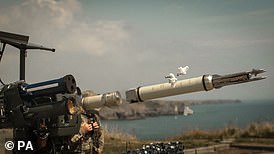 It uses a laser beam guidance system which the manufacturer says is ‘immune to all known countermeasures’.

The weapon can be launched from lightweight land, sea or air platforms and can be unleashed as soon as a target is detected – there is no wait for ‘lock on’.

It accelerates to a speed of more than Mach 3 – approximately 2,300mph – in a ‘fraction of a second’.

Once hitting full speed it releases its three ‘hittiles’ which are then guided to the target.

It is a man-portable air-defence system – known by the MANPADS acronym.

The missiles are similar to the US-made Stinger which is already being used by Ukrainian forces.

Britain is supplying and training Ukrainian troops in the use of the high-velocity anti-air missiles as well as providing body armour, helmets and combat boots.

Video shows the Ukrainian soldiers, believed to be from the 95th Air Assault Brigade, downing the drone on April 9, the General Staff of Ukraine’s Armed Forces said.

They can be heard jubilantly celebrating as they watched the drone tumble from the sky, with one shouting: ‘There’s contact, we destroyed the sh**.’

‘Air defence destroyed the Russian UAV Orlan. This is the greeting of Ukrainian paratroopers to Boris Johnson.

‘Thank you Britain. We use the support of allies effectively, send more of it. For our freedom and yours!’

Photos from the scene show the destroyed remains of the Russian drone, which is designed for visual, radar or radio reconnaissance with the possibility of long-term patrol of an area.

The downing of the Russian drones comes after Mr Johnson revealed Britain is to send Ukraine more weapons worth £100million and will work to get more tanks to Kyiv in the face of Russian war crimes. 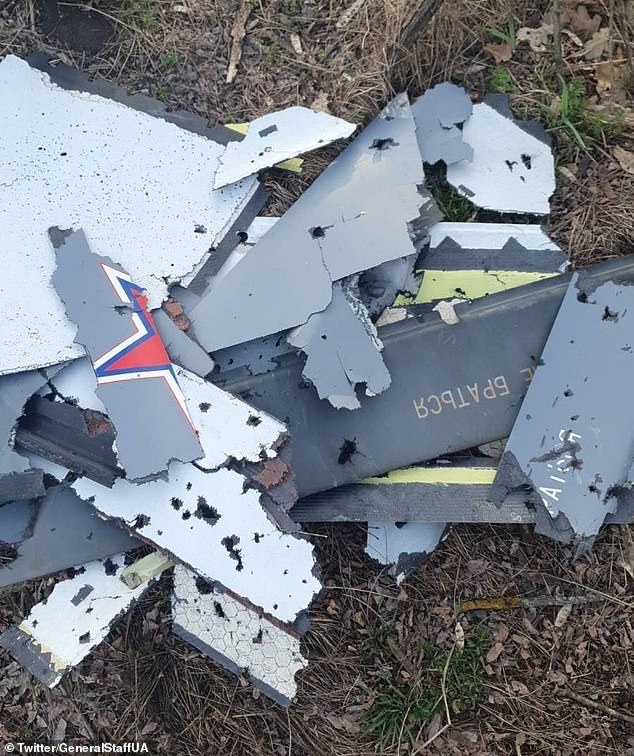 Photos from the scene show the destroyed remains of the Russian drone, which is designed for visual, radar or radio reconnaissance with the possibility of long-term patrol of an area 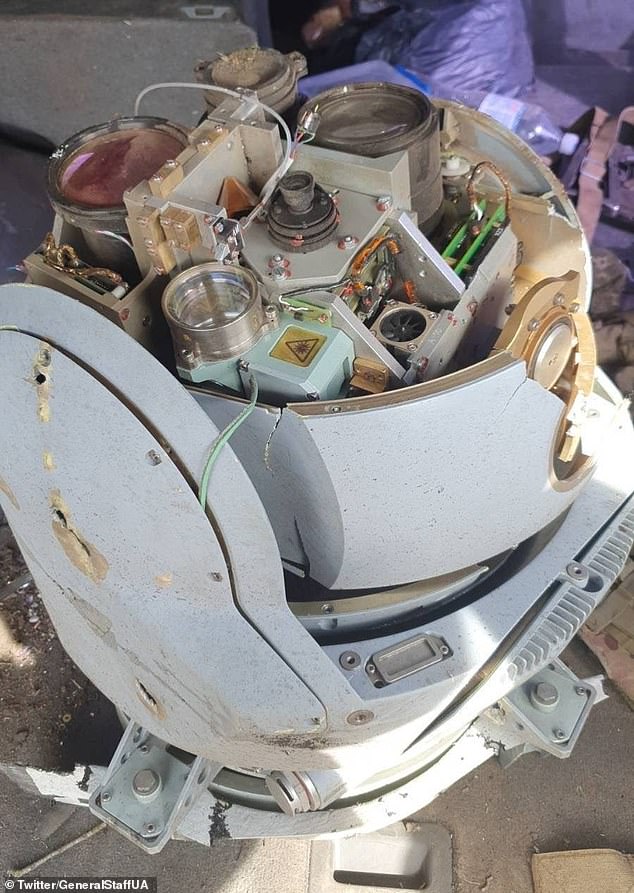 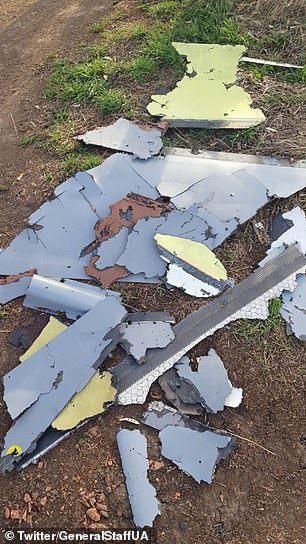 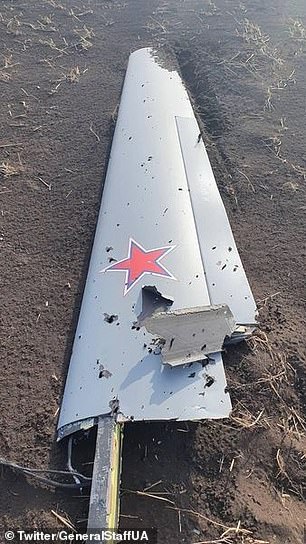 The mass killing of civilians in Bucha, near Kyiv, have been widely condemned by the West as war crimes with piles of bodies showing signs of torture and execution pictured after it had been recaptured by Ukrainian forces.

But officials have now revealed that even greater damage was done by Putin’s thugs in Borodyanka, northwest of Kyiv and about 15 miles from Bucha.

Mr Johnson said: ‘I’m in principle willing to consider anything by way of defensive weaponry to help the Ukrainians protect themselves and their people.

‘I think it’s important that we should be giving equipment that is genuinely useful and is operable by Ukrainians, that’s our consideration.’

The talks came amid anger at the EU and Germany in particular for being slow to end their energy dependence on Russia.

Mr Johnson was said to have previously criticised the EU’s ’embarrassing’ dependence on Putin’s oil and gas that has seen it continue to pay billions since the invasion.

Mr Scholz told the event in Downing Street: ‘We are doing all we can and we are doing a lot.

He said this will be achieved through offshore and onshore wind, solar and investment into its grid, but he acknowledged it would take ‘approximately 20 years’.

EU foreign affairs chief Josep Borrell has said that the 27-nation bloc is paying a billion euros a day for energy provisions, accounting for over 35 billion euros since the war started.

He said that banning oil imports from Russia would be discussed when EU foreign ministers meet on Monday.