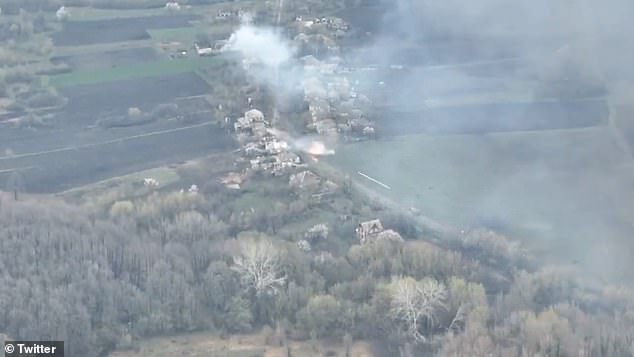 This is the moment a Ukrainian troop carrier fires at a Russian battle tank with everything it’s got – and lands several blows.

The video appears to show one of Kyiv‘s BTR-4 armoured infantry transport cars aim and fire its 30mm cannon at the invading tank, which is left in flaming tatters.

Ukraine is now bracing for an all-out assault in the Donbas region. Russia intends to forge a strategic corridor between Crimea and its own sovereign territory via the Donbas.

Roads like this one in Donetsk are therefore set to remain the scenes of intense fighting.

Putin’s battle tanks are fitted with cannons more than four times the size, at 125mm.

But they’re less mobile and quick to aim than plucky troop carriers like the BTR-4, whose cannons are also rapid-fire. 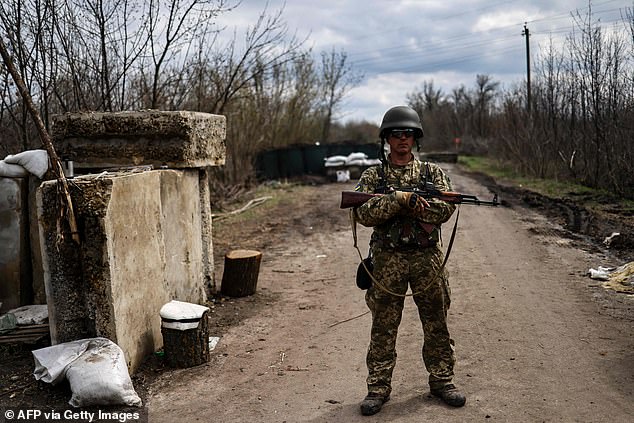 Striking footage shows the pair of military vehicles fire at each other on a road out of Donetsk, eastern Ukraine, with the battle tank taking on a volley of cannon fire.

The tank’s 40mm-thick armour plate is then pierced by the audacious carrier crew as it appears to burst into flames.

Mariupol is expected to fall within hours following weeks of courageous struggle.

The Russian military continues to move helicopters and other equipment together for such an effort, according to a senior U.S. defence official, and it is likely to add more ground combat units soon.

But it’s unclear precisely when Russia will launch a bigger offensive in the Donbas. 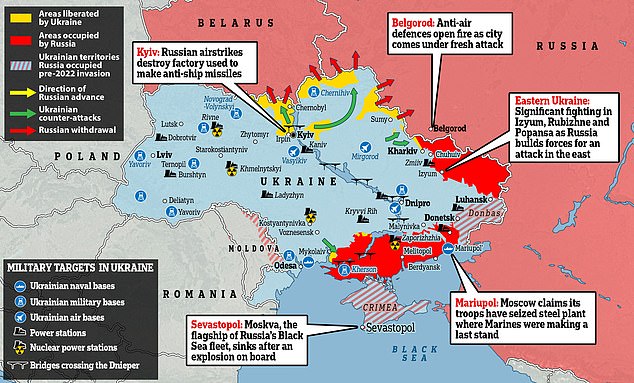 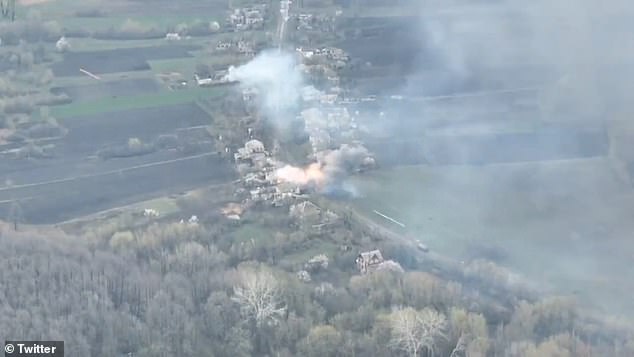 Moscow-backed separatists have been battling Ukraine in the country’s industrial heartland since 2014, the same year Russia seized Crimea.

Russia has recognized the independence of the rebel regions in the Donbas.

Yesterday Putin suffered his most humiliating symbolic defeat of the war so far after the loss of his Black Sea fleet flagship.

It’s still not known whether the Moskva sank after Ukrainian fire, as Kyiv claims, or an internal accident, as Moscow alleges. 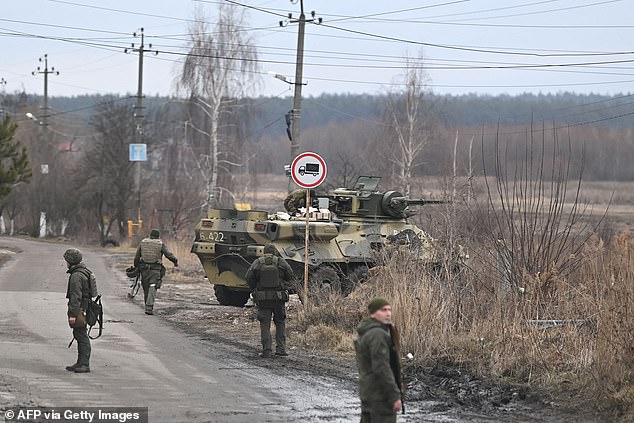 A Ukrainian BTR-3 infantry transport vehicle in the northwest of Kyiv (picture taken on Feb. 24) 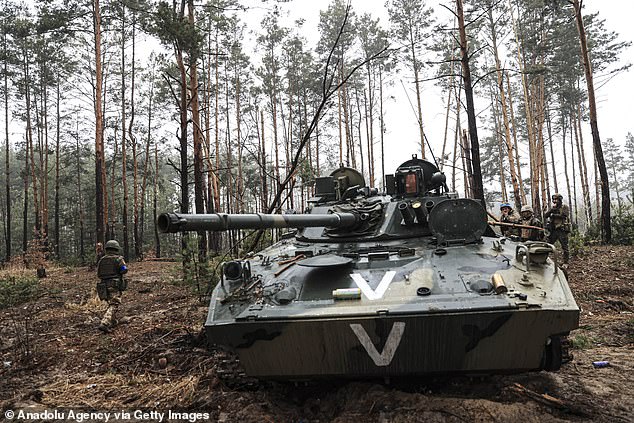 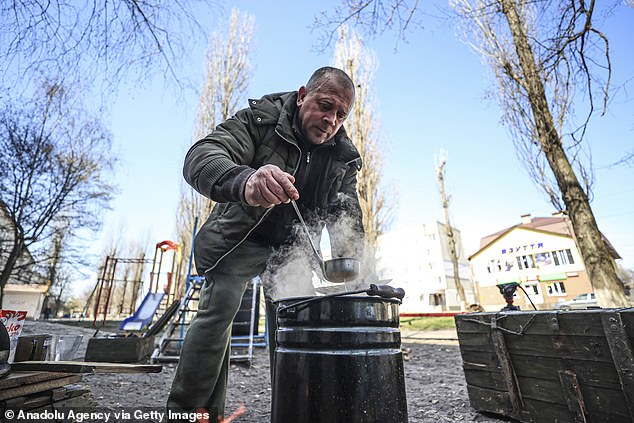 A man serves soup in a wrecked suburb of Kyiv this morning. Russian forces have left the city

The sinking of the Moskva is the biggest loss of a warship in combat since Britain sank the Belgrano during the Falklands War in 1982.

The sinking of the Moskva: Ukraine’s ingenious ruse that blew apart Russia’s flagship

By Mark Nicol, Defence Editor for the Daily Mail

The pride of Russia’s fearsome Black Sea fleet was taken out yesterday in one of the most cunning operations of the war.

The 12,500-ton cruiser’s protective sensors seemingly did not see the Neptune rockets heading its way because they were tracking Turkish TB2 drones.

Two missiles slammed into the port side of the 611ft Moskva, rocking her violently and causing a catastrophic explosion and huge fires. As flames lit up the stormy Black Sea, the ship’s 510 crewmen frantically climbed into lifeboats and fled.

The surprise attack took place at 2am yesterday as the Moskva, Russia’s main ‘command and control’ warship, was around 60 miles south of Odessa.

The ship’s captain and air defence officers were said to be tracking the decoy TB2s, unaware a pair of Ukrainian-made Neptune R360 anti-ship missiles were heading their way after being launched from an artillery battery on the coastline.

The missiles, each weighing a ton and with a range of 186 miles, approached the Moskva at sea level. Travelling at such a low trajectory in rough seas meant they were difficult to track. They hit their mark.

After the attack, the ageing cruiser – which first launched in 1979 – was initially towed towards Crimea. US intelligence said it was still on fire.

It had been expected to be written off as Russian shipyards are unable to operate because of international sanctions. But last night the Russian defence ministry said the Moskva had in fact sunk ‘while being towed in a storm’, the state news agency Tass reported.

In terms of military hardware, the Moskva represents the largest single loss to Russia’s armed forces since the war began.

Yesterday’s highly sophisticated sortie came just hours after the US acknowledged it was providing ‘direct intelligence support’ to enable precision targeting of Russian assets. It was also the culmination of a lengthy intelligence gathering operation which, the Daily Mail has learned, revealed the ship was operating in what sources described as ‘predictable patterns’ in the north-west Black Sea and often without escorts.

It is customary for large cruisers, in particular flagships, to be accompanied by frigates which provide a protective screen.

But perhaps because they assumed they could operate with impunity, Russian commanders neglected to guard the Moskva. The incident is expected to make Russian naval commanders more wary when operating near Ukraine’s coastline.

The Royal Navy has trained its Ukrainian counterparts in recent years to improve standards. But UK officials played down suggestions Britain could be credited for the operation. Ukraine designed and produced the Neptune missiles used in the attack. Ironically, they are based on a Russian design.

Last night, warship expert Jonathan Bentham, from the International Institute for Strategic Studies, said: ‘Working on the assumption the Moskva was hit by anti-ship missiles, this raises questions about the operational capabilities of the Slava-class cruisers and the state of the wider Russian navy. In theory, the ship’s anti-air defence capabilities should provide enough cover to avoid being hit by a subsonic missile like Neptune.

‘If the third-largest surface vessel in the fleet – behind the Admiral Kuznetsov and the Pyotr Velikiy – is lacking these capabilities, what else is it lacking?’

The Moskva had the capacity to carry 16 long-range cruise missile and its removal reduces Russia’s firepower in the Black Sea.

It’s also a blow to Moscow’s prestige in a war already widely seen as a historic blunder.

Now entering its eighth week, the invasion has stalled amid resistance from Ukrainian fighters bolstered by weapons and other aid sent by Western nations.

During the first days of the war, the Moskva was reportedly the ship that called on Ukrainian soldiers stationed on Snake Island in the Black Sea to surrender in a standoff.

In a widely circulated recording, a soldier responded: ‘Russian warship, go f*** yourself.’

Ukraine and its supporters consider it an iconic moment of defiance. The country recently unveiled a postage stamp commemorating it.

Russia’s Defense Ministry said ammunition on board detonated as a result of a fire, without saying what caused the blaze.

It said the ‘main missile weapons’ were not damaged and that the crew, usually numbering about 500, abandoned the vessel.

It wasn’t clear if there were any casualties. In addition to the cruise missiles, the warship also had air-defense missiles and other guns.

The Neptune is an anti-ship missile that was recently developed by Ukraine based on an earlier Soviet design.

The launchers are mounted on trucks stationed near the coast, and, according to the Washington-based Center for Strategic and International Studies, can hit targets up to 280 kilometers (175 miles) away.

That would have put the Moskva within range, based on where the ship was when the fire began.

Launched as the Slava in 1979, the cruiser saw service in the Cold War and during conflicts in Georgia and Syria, and helped conduct peacetime scientific research with the United States. During the Cold War, it carried nuclear weapons.

News about the flagship overshadowed Russian claims of advances in Mariupol, where Moscow’s forces have been battling the Ukrainians since the early days of the invasion in some of the heaviest fighting of the war – at a horrific cost to civilians.

Dwindling numbers of Ukrainian defenders in Mariupol are holding out against a siege that has trapped well over 100,000 civilians in desperate need of food, water and heating.

David Beasley, executive director of the U.N. World Food Program, told AP in an interview Thursday that people are being ‘starved to death’ in the besieged city.

Mariupol’s mayor said this week that more than 10,000 civilians had died and the death toll could surpass 20,000, after weeks of attacks and privation carpeted the streets with bodies.

While the U.S. was not able to confirm Ukraine’s claims of striking the Moskva, U.S. national security adviser Jake Sullivan called it ‘a big blow to Russia.’

‘They’ve had to kind of choose between two stories: One story is that it was just incompetence, and the other was that they came under attack, and neither is a particularly good outcome for them,’ Sullivan told the Economic Club of Washington.

Russian authorities accused Ukraine yesterday of sending two low-flying military helicopters some 7 miles across the border and firing on residential buildings in the village of Klimovo, in Russia’s Bryansk region.

Russia’s state security service had earlier said Ukrainian forces fired mortar rounds at a border post in Bryansk as refugees were crossing, forcing them to flee.

The reports could not be independently verified.

Western officials said Ukrainian reports of the Moskva operation were ‘credible’ and the attack demonstrated their ability to strike the Russians in areas where they assumed they were invulnerable.

One said: ‘The incident represents another enormous loss in terms of Russian credibility. They’ve been shown again to be vulnerable to attack.

‘This is a question of competence. This is supposed to be a military which has modernised itself over the last decade.

‘The Ukrainians have used their imagination and proved so resourceful. They are able to act on the fly to have an effect on Russian forces.’

Khloe Kardashian is seen in black after posed with son’s face away in royal...

Planned Heathrow strikes could cause travel chaos for football fans flying out to Qatar...